This past week has been a crazier social whirl than ever-weeks like this are seen usually only around music awards and the such! 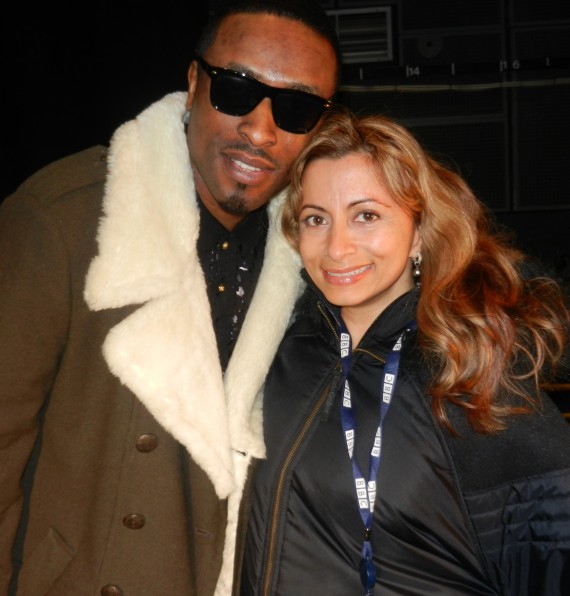 JASMINE WITH MEGA-SO SOLID’S MAIN MAN!
Monday I had a hearty Greek dinner with BET news host-the gorgeous Sharon carpenter who was in her hometown of London for a minute before heading back to the states. Sharon has done amazingly over the years. I watched her career go from strength to strength as she upped sticks from the UK to USA and is now a household name out there. I’m always particularly impressed by the fact that she’s a smart, professional journalist that focuses on more serious pro-social showbiz stories (aside from the odd stint where she’s done some crazy Aneka style madness LOL!). Sharon is also on a variety of American networks and will hopefully be back on our UK screens too.
Tuesday saw me at the architectural magnificence that is Somerset house. a great beautiful building in the center of London that hosts a number of summer music festivals and so much else. I was there to watch a screening of a film made by young people after last years riots titled FROM RIOT FROM WRONG, which was made in conjunction with FULLY FOCUSED PRODUCTIONS. The film was brilliant. The youth that made it clearly had personal in-roads to the residents in totenham and mark duggans family and were able to piece a brilliant one hour story together that repeatedly showed the unfair police and family scenario played out alongside disenchanted young people. It would be great to see the film get a terrestrial showing soon!
Wednesday I wet myself laughing. No. Truly. A few girl friends and I went to PEOPLES QUESTION TIME at Hammersmith town hall- having been invited by Boris Johnson and his mayoral London assembly. To be clear this is NOT the same as the TV show question time. This is a massive ballroom full of people all throwing questions to Boris and his political peers. The event was well organized, the running order printed on beautiful pamphlets, a nicer class of people in attendance. Oh how wrong my initial perceptions were!. No sooner had the first area of discussion (policing and safety) started than there was ruckus heckling, the middle and upper class toff females were yelling blue murder at the stage, screaming through Boris’ answers and the dissing comments were flowing from Politian to politician with more venom that Nas and Jay-Z’s ether days! Audience were shouting ‘’bumbling Boris!’’. Boris was yelling ‘’ you are squatting like Buddha’’ to green party leader jenny jones (yeah I guess it must be a known diss in that other world LOL). It was utter pandemonium! Add to that the occupy London protesters who had spread themselves throughout the audience and who just suddenly stood up and yelled their manifesto too and it was a right ole ding dong!. The girls and I thought there was more abuse and heckling than at boxing matches we had attended-and they are vile! it was great entertainment and brain fodder. Chiswick residents were screaming about the new high speed rail link that’s attempting to demolish their homes and community, shepherds bush shop keepers were up in arms at their council allowing property developers to shut them down after generations of trading-it was a proper argy bargy!
Thursday night I legged it up to BAFTA to see Freddie Kruga’s debut film titled BLUD and Friday was Tottenhams finest/ chart star Wretch32 very private party-so private the location details weren’t sent out until midday on the day of the party! The theme was presidents and first ladies-yep-I got my long gown game on!

Whilst London’s urban music scene is thriving both in the UK and internationally there are still issues that we haven’t managed to conquer. The 696 form by the met police which requires that club owners and promoters must fill in this form for any urban music event or event which might have an urban music star in attendance has started affecting peoples livelihoods and careers. The form is supposed to keep club goers safe. We all know about south London hero Giggs who’s career seems to have been single handedly stopped at every turn by police who don’t want him to perform live anywhere. As a role model to many-seeing him able to perform may encourage youth that there is a life after crime and negativity-the 696 form has stopped that notion. So Solid Crew was targeted a decade ago and to this day they are stopped at many venues from performing. This form affects any urban acts from black, white and Asian communities. If you’ve had any association with gangs in the past this form will stop you performing and attending live events. Lawyer Shamik Dutta is taking the met to court over this form, which he cites as racist. However not all people feel bad about it. Twice as Nice CEO and legend Steve Gordon values it as keeping his club venue and patrons safe. He argues ‘’ “I’m not one of these fly by night promoters that wants to give it the large in the VIP, I want to look after you-“If you have a record of firearms and that means your going to be searched when you arrive and maybe before you go on stage I don’t see the problem if you have something to hide I don’t want to work with you”.
Michael Lawrence from the Coda Agency said ‘’some of these acts are big enough to be on channel reality shows –Romeo- Big Brother, Harvey- The Games, BBC1 and Channel 4 stars like Ashley Walters (Top Boy and Inside Men) and so on…but its when these pop acts come together in London they cant be trusted apparently’’. Trident chair women Claudia Webbe said ‘’far too often its being used by police and licensing authority’s as what some would argue as a focus in on the black community in particular, it is disproportionate to clubs that draw a black audience’’.
And Skitz said: “If you look at the audience of a lot of these grime nights its middle class white kids” . Jo Dipple chief exec of UK MUSIC said ‘’I think its shocking they still use this form in London, we have campaigned to the mayors office to have it dropped and will continue until it is’’.

It was fascinating to hear from So solid leader Megaman who has experienced this from the beginning. He agreed ‘’ if you’ve been affiliated with gangs then the 696 form will prevent you from performing and moving forwards you’re going to be disheartened and forced to return to the negativity you were involved in before’’. Mega recalled the days pre the form ‘’ I’ve only had to deal with that 696 form since 2006 getting a few of my artists into events, before then there wasn’t a 696 sixth form, just no So Solid, or no Mega or no Romeo. Legally it’s not lawful to stop artists performing in a club so they had to bring in some sort of legal form of doing it and the 696 form was an excuse I feel to prevent artist from progressing. For the last six years now I’ve had lots of artist wanting to book So Solid artists in key areas in London we thought we could never perform in again i.e. Brixton or South East London, 9 Elms Lane, Vauxhall, Ministry of Sound, we thought we couldn’t perform in these places. After a while began performing in these places, put it this way, I’ve had certain conversations with promoters, and they’ve all put this risk assessment form and it’s like sometime you pass it and sometimes you don’t’’.

Mega is adamant that more compassion and forgiveness is needed ‘’I say to the police that we all have children and if your child makes a mistake you don’t turn your back on him, you look after that child and every child on this earth has a mother and father just like everyone else out there so when your preventing him or not given them that opportunity to excel and become something of themselves it’s very disappointing. On the police stand point I would say a small part of it is down to racism, a small part of it is down to not allowing gang affiliate artists to be in certain clubs. They say if it were predominantly white crowds it would be more fistfights, if it were a predominantly black crowd it would be weapons’’.
Asked if he feels the police are institutionally racist Mega is firm ‘’Yes, as a black individual I’ve travelled the world I’ve been to Cyprus, Dubai,, America, the only place I don’t feel I’ve been hit with racism is Africa, it’s the only place and I’ve been to France, Germany, Amsterdam many different places and I still feel a hint of it and me as a young black guy I’m trying to come to terms with it, I’m not sure where to pin point it or where it stands but it’s a problem worldwide’’.
‘’Really it’s the responsibility of the club owner and security to secure your venue, whoever walks throughout that door you can search them right down to their socks, it’s your due restriction. When the artists leave the club it’s down to the police to police the venue outside.. Getting involved in this risk assessment form is like saying, it might happen it might not happen but lets stop it anyway and it’s like football it never gets stopped, regardless, football never gets stopped and that’s big business and music should be in that same bracket because music is big business. A lot of corporate companies like Universal, EMI, Warner Bros are signing a lot of these acts from Giggs to Sneak Bo, and a lot of these acts that are from or have been affiliated with gangs in the past and there signed to mayor deals now and a lot of these companies need to turnover revenue, they’re contracted to turnover revenue for these companies so I’m not sure how lawful it is to prevent artists like that from performing and adhering to their contract’’.

Mega does however admit that he’s not totally against the 696 form ‘’This is me speaking today, if you asked me this 10 years ago you’d have a different answer but if you ask me today we need something in place, a lot of young people get into music and we don’t really understand the opportunity we’re in and the greatness that we’re in, we can speak about whatever we want to talk about whether it’s drugs, firearms or whatever particularly doing that we should actually get some space to breathe and to just create music. To me something should be in its place, I don’t think it needs to be abolished totally but we need to monitor how it’s being used’’.
so what do you think readers? is the 696 form good for us black music lovers? Get online at THE VOICE Entertainment section and lets discuss!.