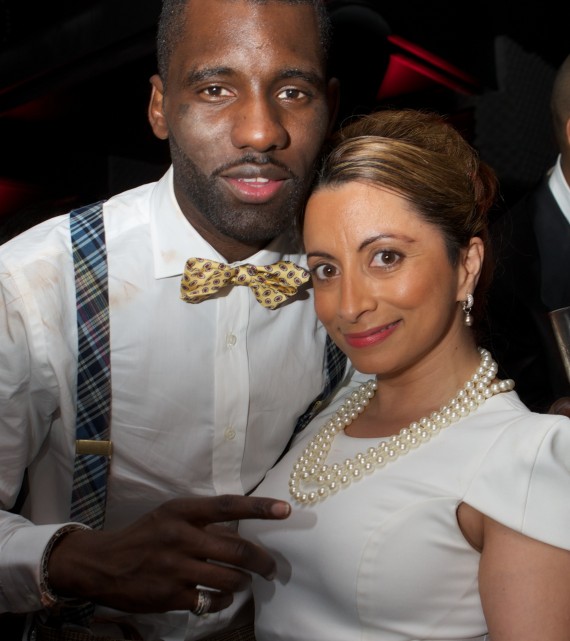 JASMINE WITH THE PRESIDENT-BIRTHDAY BOY WRETCH32!
Did you all celebrate your mothers last weekend? I hope so! (But isn’t it always a bit of a nightmare? last minute cards, over-priced flowers and restaurants and traffic? I was very over ambitious in that I spent Friday night at wretch32’s birthday party at a nightclub in Jermyn street in the centre of town, got in at 5am the next morning-had planned a dinner party the Saturday night at mine and then again on Sunday night as well as promised our west London home girl Estelle to be at her new album launch party for ALL OF ME at aura on Sunday night too.
I actually, for the first time ever, begged forgiveness from Saturdays guests as I casually threw out ‘’oh tonight I thought we’d have take out Chinese with a bottle of champagne’’. I saw our guests faces drop as they looked at me horrific that for once I wouldn’t be cooking up a storm, and then dropped the bombshell ‘’we cant drink, one of us is pregnant’’. awkward.com. The Chinese came. It was bad. And expensive KMT. But we did have fun. Moral of the story? If inviting peeps over for dinner-MAKE them dinner! The next night I got my domestic goddess on and made a full roast Dotiwala style with an ethnic twist- herbed up mac & cheese and savoury Yorkshires with a whole chicken stuffed with garlic, chilli and ginger!
Can you imagine what sort of mess I was in on Monday morning? No really-you cant!
I struggled through Monday and then on Tuesday hit City Hall with hundreds of young people for the SPRIT OF LONDON nominations launch party. Ashley Walters performed and spoke inspirationally about the power of young people; SBTV’s main lady Georgia hosted the event in her kooky posh street slanguage style that’s really her brand and no-one else’s lol, spoken word poet Dean Atta performed with passion, as did many other young people- the youth dance troops were on fire, they revealed the awards this year will be held in November at Wembley Arena. Last years sell out venue at the Royal Albert Hall in front of a host of celebs and thousands of youth was amazing so look out for that! 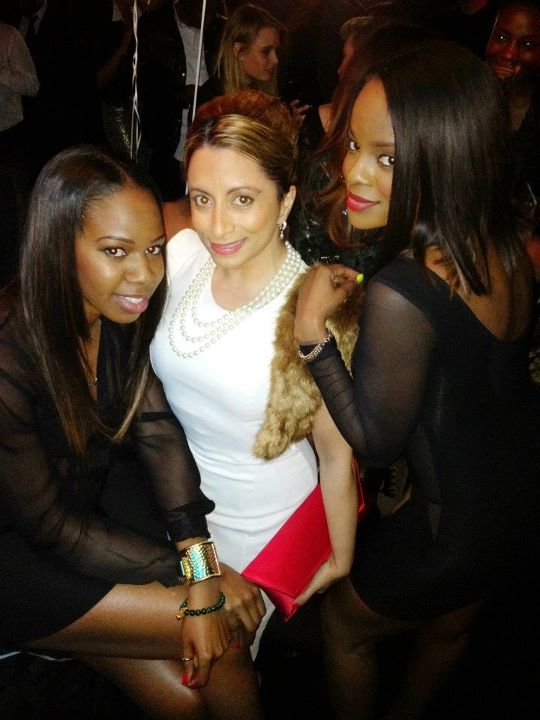 JASMINE WITH PR MAVEN VANESSA AMADI AND SUGABABE ORIGINAL LEAD-KEISHA BUCHANAN.
The party of the year so far- and I cant see any others taking his crown for now- was as mentioned above the birthday soiree for the Tottenham champ they call Wretch32. Held at a nice club basement in central London, the venue was full early into the night with loads of ladies who had turned up early to guarantee their two-step gyrating spot.. Wretch’s invitation specified that the theme was ‘’presidents and first ladies’’ so I had slithered into a fitted knee length white Victoria Beckham frock, some classic classy nude Chrissy Lou shoes, a pearl necklace strung around my neck, and my hair piled into a high 1st lady beehive. Well. Imagine my face when I swanned into the party and not one person had respected their host’s request to follow the theme! I did spot a Marilyn Monroe and an Arabian prince and Preeya Kalidas did wear a prim cute black classy 1st lady frock but aside from that there were numerous scantily clad ladies in barely butt skimming dresses. I thought disgustedly ‘’I didn’t think Michelle Obama would ever be rocking these garms!’’ but it was all worth it as many commented on how fly the outfit was. The wonderful thing about the party was that EVERYONE in the #teamuk mould was present to support and have fun. I’ve been to a lot of artists parties in my time but the love and positive energy that wretch and his team brought to that room I wish I could’ve bottled!. Everyone was having a manic party time. it was the usual rammed affair at the door with many waiting outside for a couple of hours to get in. luckily I was scooted in quickly. All the males were dressed to the 9’s in their slick efforts at being presidential. Ladies-I gotta say it, as much as I am #teamlady, you’ll let the side down. Nibbles were passed around. on the 1’s and 2’s was regular celeb party DJ- bringing the hottest street heat to the function-DJ Manny Norte-the name you can trust (look out for him-big things are just about to pop off more commercially for this guy).
The number of acts that turned out to pay respect to north London’s finest-wretch was incredible. Kano looked as handsome as ever and played the cool smiling pres,
I nearly didn’t recognise both G-FRSH and Ghetts in their suits-they looked hot. Also undercover in a new look was Hackneys finest- Ms Leona Lewis who many didn’t recognise with her dark hair, geeky specs and French beret-I thought she looked very sophisticated and was really getting her dance on.
The party was clearly where I was at cos Leona and Jamelia were winding down in front of me with Keisha Buchannan. Jamelia had a real party that night-it was good to see her let go and just enjoy around trusted friends. Keisha looked stunning in her tiny black frock and had a lot of the men’s attention, as did new young hottie Princess Nyah in her mini cutout body con dress. Bashy was stood directly behind me on the sofa dancing and jumping hard in his president suit, no socks and sneakers-he was casual pres.
J2k was swagging hard with his boys; the heartthrob of the grimy world- scorcher was literally fighting the girls off. It’s those cute dimples, baby face and tall manly physique that had the ladies losing control. About to blow big west London hottie and ROC NATION signee Rita Ora was macking a mans sharp cut beige suit and the night was rocking.
Wretch had a pyramid of cupcakes and he himself was rocking a tweed suit with braces and dickie bow tie-so sweet! He was a charming host and greeted all his guests whilst still jamming hard and taking photos with all. a great night full of much love and friendship. Salute wretch on your great graft and movements so far- we all adore your work ethic, charm and talent. Onwards and upwards birthday boy!