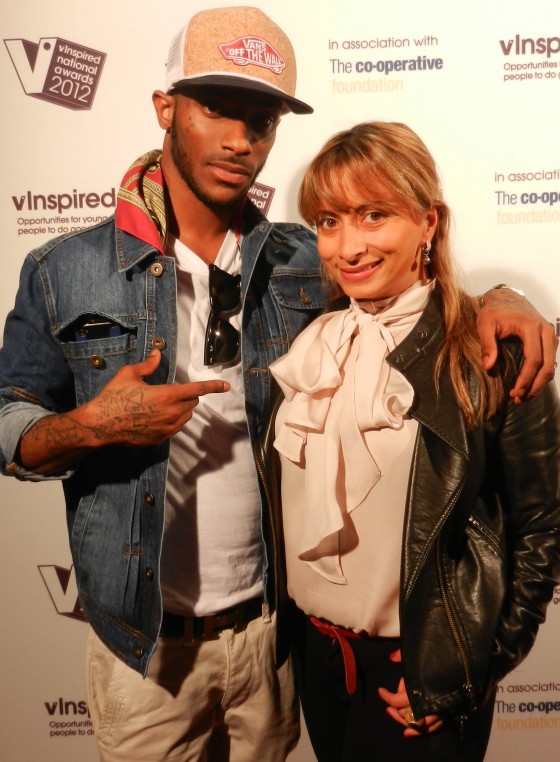 JASMINE WITH ANGEL AT THE V INSPIRED AWARDS.
The week began with London’s music fans trotting down to the 02 Arena where drake was performing (more on that in next week’s juice).
Tuesday was my girl Mariah’s birthday and so in honour of a diva friend, I decided the best way to celebrate a Queens ‘’anniversary’’ as she likes it to be known as, was to spend the day doing things that made me feel like a diva. I started at the celeb hair salon 3V in Notting Hill Gate to get my hair done. Always dangerous as hair technicians Julian and Melissa like to ply their clients with flutes of champagne. I try to focus on the glossy mags and not the other celebs sitting alongside me which is always tough as I gawp at major household names who are getting their hair extensions freshened up and so forth. Alas I know Julian would ban me from the salon should I name-drop any names so I’ll stop here.
Wednesday night I took my colleagues and boss for cocktails at the Ivy members club in town. Always a great experience as the door, reception and bar staff treat you like a long lost friend on every occasion and the drinks and food are the best in town. Once again I like to observe which celebs are sat near the piano in the piano bar as there are usually a few merry superstars having a singsong with a cocktail in hand. Alas, once again, I’m dying to spill a few Hollywood star names and UK household characters but I know the owner Richard Caring would slap my wrist and ban me so its lips shut. I will say though that seeing a style icon, with a big fashion house fashion designer, a supermodel and a business legend that is a British household name singing along to the tinkling of the piano was something I wont forget in a hurry! 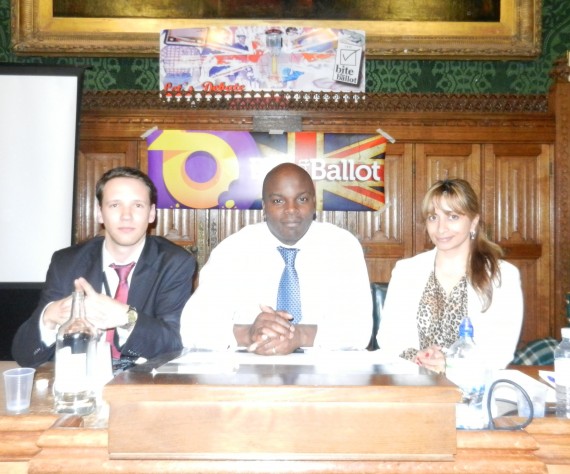 JASMINE AT PARLIAMENT WITH BITE THE BALLOTS INSIDE MAN PETE LESNIAK AND TORY BIGWIG SHAUN BAILEY.
Thursday night all roads led to Parliament for the YOUTH VOTE LONDON pre-rally soiree for taste makers and power players that make decisions for young people in the city of London alongside the MP’s and reporters- we were all reminded as to why its important to attend the YOUTH VOTE LONDON registration rally at Ministry of Sound in Elephant and Castle on April 14th to learn why your vote counts. You’ll be told by major names in the industry. An organization called BITE THE BALLOT hold regular ballots for young people in parliament where they meet and discuss their political issues with the MP’s. This made brilliant viewing-I attended one last week where former youth worker and tory bigwig Shaun Baily and others chaired a debate with young people. The opinions and debate were fascinating to watch. Youth have a lot of passion and these young people are our future. I only wish there had been opportunities like this for me to go to Parliament with my mates as a youngster and speak to politicians and talk about what mattered to us. The opportunities are here for you all now. Use them. www.bitetheballot.co,uk 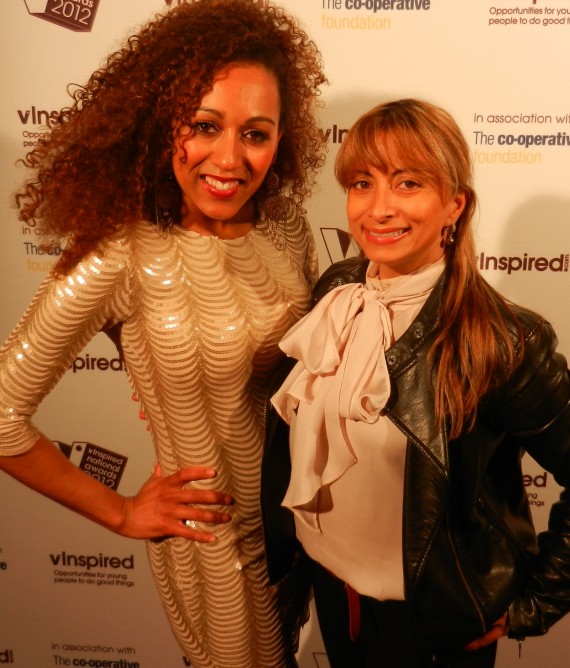 JASMINE WITH DANIELLE BROWN AT THE V INSPIRED AWARDS.
My favourite things in the last week though were going to the V Inspired awards at the BFI on the South Bank where comedian/radio host Eddie Kadi and presenter Emma Griffiths were hosting the night that celebrates young people that volunteer and give back to their communities by doing great things. Most of these youth have achieved more by the ages of 25 than most of us will in a lifetime. In the pre-show reception I sipped a cocktail and tasted the delicacy’s like steak and wedges nibbles (which were mouth watering!) with my pal Danielle Brown who was sporting a gorgeous gold mini dress, as we watched all the movers and shakers get papped and interviewed before the show started.
The night was kicked off by an opening performance by Angel and Wretch32. Angel was good and I’m sure with a little more confidence on stage where he talks to his audience between tracks will live up to his full potential. However once Wretch32 joined him onstage for their song ‘’Go in, go hard’’ though their duet was electric. The young people that collected their awards from them were pretty chuffed too.
Awards were presented by many including my mate and one time TV presenter Trevor Nelson who was looking sharper than a razor in his black suit, SBTV’s main man Jamal Edwards who read his inspirational speech from his blackberry which I teased him about (a true modern tech man LOL), the Stooshe girls looked loud and colourful and I wondered if their talent would match? I was happy to see it did with their vocals and stage set being very strong and well rehearsed. So well in fact that you’d think they’d been around for years. Their heels were extremely vertiginous and backstage we spotted and giggled as one of the ladies tripped as she attempted to strut in them. Oh I’m a meanie. I expect big things from these ladies-its so good to see the ladies taking over the charts now. (Sidebar- Congrats to Dominique young unique on signing her global Sony deal this past week!). Bigger congrats to the following who blew my mind.
Winner -Best new volunteer: Zoe Burden, from Lowestoft, has been volunteering for Brighter Futures for the past year, taking children in care on day-trips and giving them opportunities to socialize – a cause very close to Zoe’s heart as she is currently living in supported accommodation and has, herself, been in care for the last three years.
• Winner -All round commitment to volunteering: Danika Hamilton, from Hulme, is a passionate and committed volunteer who credits volunteering with changing the course of her own life. Having experienced coping with homelessness and depression, volunteering has given her focus and determination to help others
• Winner-Bringing communities together: Joanna Mayes, from Biggleswade, volunteers for NACRO as a football coach. She has overcome a very traumatic time in her past and feels that volunteering has helped her along her road to recovery
• Winner- Team Activity: The Co-operative StreetGames Young Volunteers programme team in North Tyneside takes on a large group of young people drinking in a local park on Friday nights by setting up street football sessions
• Winner- Outstanding Contribution by a Youth Worker: Barry Clark, from Hatfield, has been working at the Hatfield centre for more than 40 years, providing a variety of volunteering activities for young people depending on their interests
• Winner- Most Outstanding NCS Team: Harrow National Citizen’s Service (NCS) team aims to promote a more cohesive, responsible and engaged society by bringing young people from different backgrounds together to make a difference in their communities.
A very humble Tinchy Stryder closed the show with a very impressive se with his DJ Spyro. It’s easy to forget just how many hit songs this young act has had but the whole audience full of kids and adults were up on their feet singing to track after track. A true sign of an artist that’s about his music as opposed to hype. His onstage performance has come on leaps and bounds too- very impressive. a great night that made me start researching about where I could possibly volunteer- do any of you volunteer anywhere I might be able to join you? Let me know. 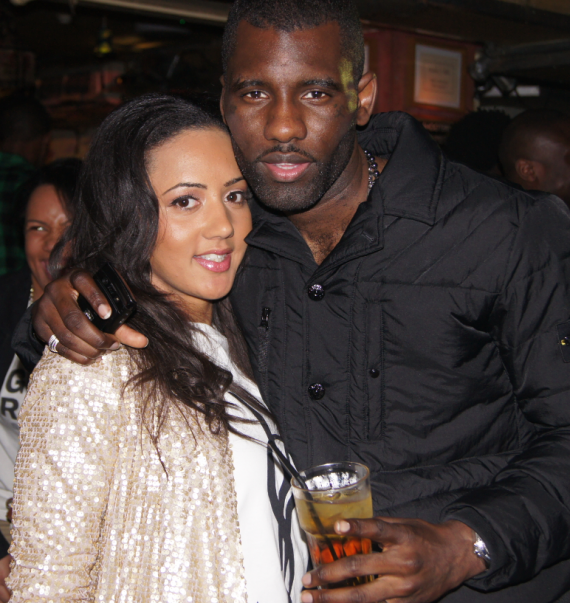 NYAH AT HER SHOWCASE WITH MATE WRETCH32.
Straight after the V Inspired Awards myself and others like Wretch32 raced down to West London nightclub YoYo where Princess Nyah was performing a short set.
It was a great first live performance of the year, where she sang all her new material and it was very well received, the support from the artists in the venue was monumental too. Her frriends that turned out to support her included wretch 32, Adot, Cleo Sol, Target , manga and more which Nyah told me made her ‘’feel really warm! ‘’’
An excited just off-stage Nyah breathlessly gushed “It felt good to be back home at YoYo’s, the vibe here is a performers dream, and the support from my fellow Artists did not go un noticed – #TeamUk!!”
The overall night was great and packed, the crowd seemed to levitate mostly towards Soldier, Artillery and Around the world in my set, and like a true MTV star she was filming a day in the life! Nyah’s good mates with Future the Prince (Drakes DJ) who was DJ’ing on the same bill, which rounded the night of nicely!
Now I’m off to plan my fancy dress party- theme; OLD SKOOL HIPHOP. How classic will this be? My last big party’s saw practically the whole of #teamuk dressed as Motown legends, usher drank loads of Cristal, Lennox Lewis insisted and didn’t get a VIP area, Joe made the ladies gush. Time o go get my Lil Kim / Foxy Brown look together!