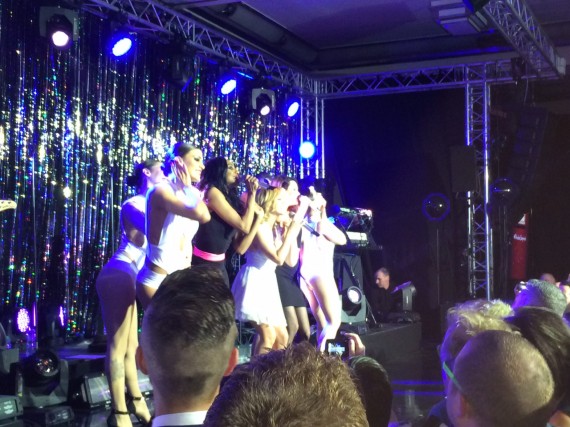 KYLIE AND DANCERS ONSTAGE AT HER MASTERCARD PRICELESS PRIVATE SHOW AT BLOOMSBURY BOWL.

After 26 years in show business Kylie Minogue is back.
She has always had a finger in more than one pie, whether juggling soap actress duties with singing, or balancing reality show judging with her musical path and its still going strong. 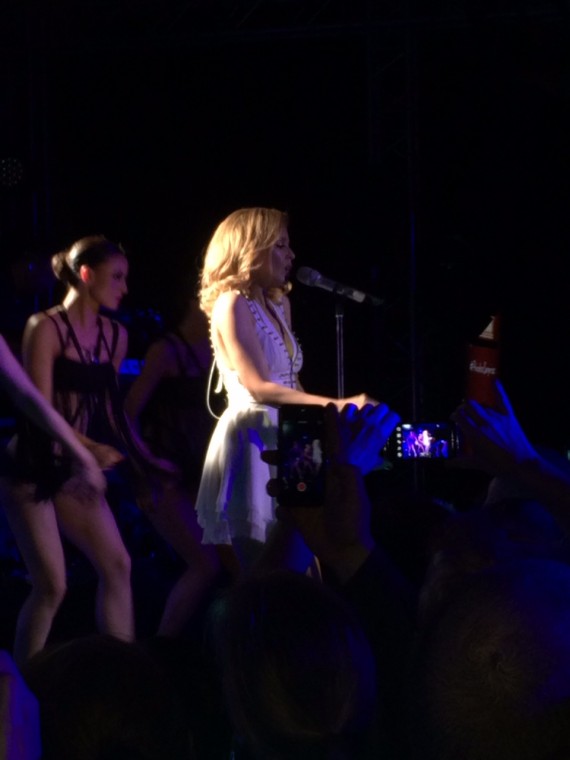 Kiss Me Once is the twelfth studio album by Australian recording artist Kylie and its released by Parlophone this week. Its her first studio album release since Aphrodite, and first album under the management of Jay Z’s Roc Nation. In a surprise move for both pop and hiphop fans, when the Australian soap princess joined forces with hip hop behemoth Jay Z, we wondered what the direction might be musically for her new work. No big musical digressions however, this pop princess knows not to fix that formula if it aint broke. There’s no intention for her to rap aside from a Blondie rapture style spoken word moment on her track ”body language”.
However, there is a nod to dub step in the new material, as well as having worked with Darkchild, Stargate and Will.I.Am in the past year, its clear she understands that urban music is not just a passing fad and she knows hit makers when she hears them. 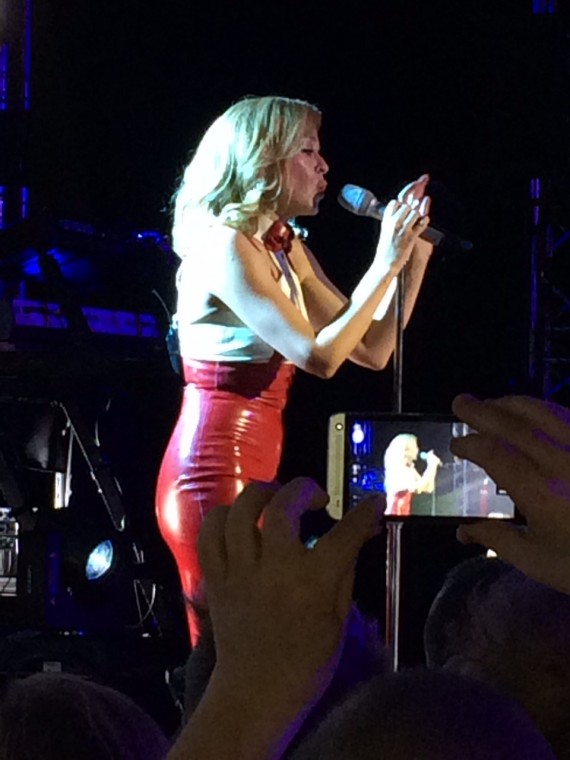 Like a chameleon, Kylie hitches a ride on passing music trends with each subsequent album, but stays true to her own unique brand of cheesy pop. She’s done it all; corny pop, electronic dance pop, all out catchy dancy pop and now has music man of 2014 – Pharrell Williams- as well as practically unknown superstar songwriter – Londoner Wayne Hector who has also written for her latest offering. 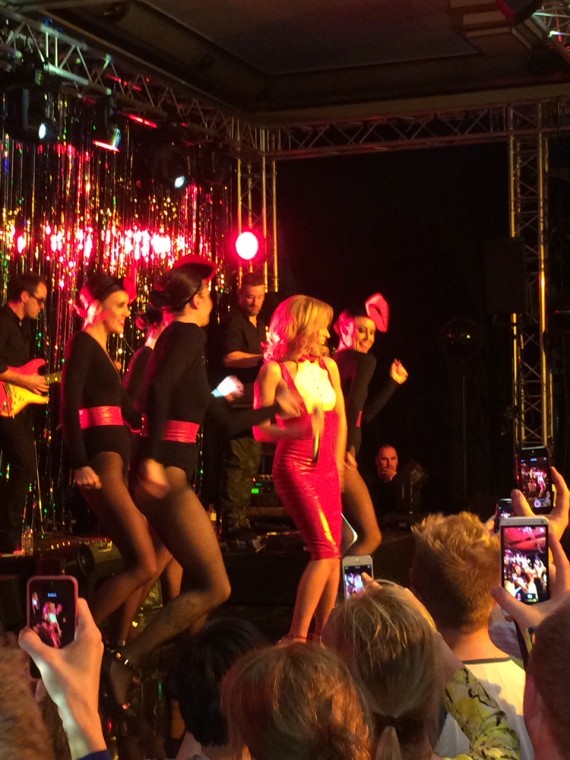 Kylie performed new songs from her latest album at an exclusive private show for Mastercard customers and fans at the Bloomsbury Bowl ballroom in Holborn where drinks and mini food platters were served to the 300 winners. The stage set consisted of a backdrop curtain of pink tinsel streamers, backing singer line up, live band and for some inexplicable reason, the drum kit was sectioned off and protected by a perspex pull out separator.

To hysterical whoops of joy from fans, Kylie came onstage in a virginal white Grecian inspired outfit which her dancers matched in their white leotards with cutout body parts. Her dancers were all tall, brunette and chic with classic side bun french chignon hairstyles. A special nod must go to the choreography which was typical Kylie stylee. Long beautiful poses straight out of a parisian art café book, poses and pouts a la old music hall chorus girls, long slow vogueing gestures that had you mesmerised and impressed. The look was very Robert Palmer in his ‘Girls’ video. 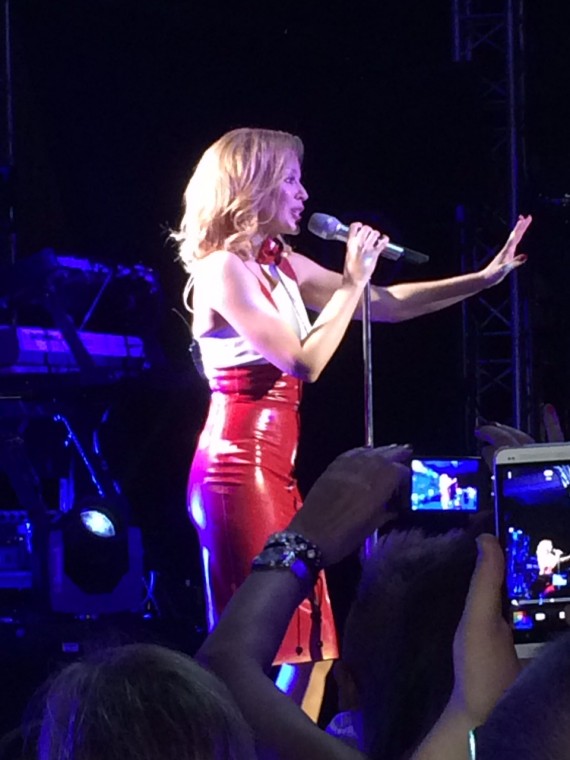 Her backing singers, once again were all brunette, tall and model-esque. Its a very unusual thing for a female singer to have other females onstage with her who are taller and thinner. Many superstar solo ladies don’t like to be compared to females that they compare alongside unfavourably so this really shows how secure and balanced as an act and person Kylie is. Having said that though, tellingly no other female onstage was blonde – that would be a step too far and perchance distract from the main lady. 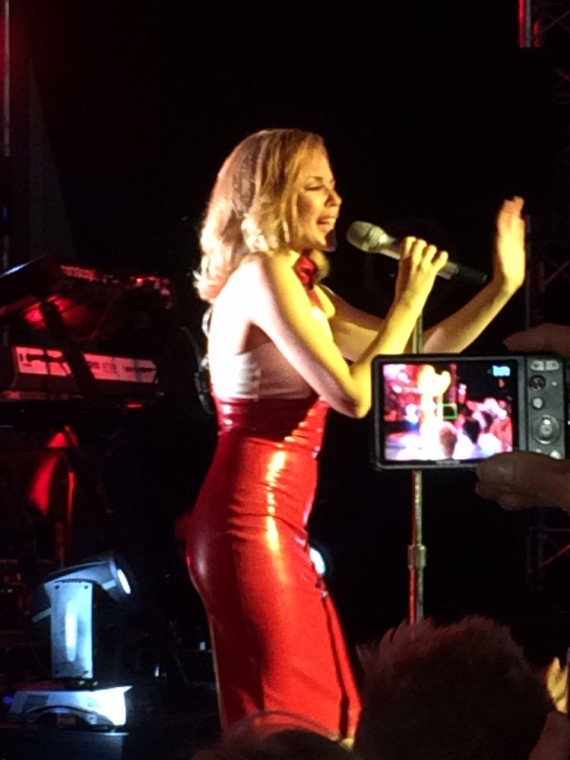 Kylies dancers second outfit were black versions of their leotard- this time complimented by tassels.The dancers third and final outfit were black leotards with wide red cumberband waistbands and matching red lips hats- a humorous ode to the new album title ”Kiss Me Once”. The whole feel of the set was stylish chic with a Parisian twist. 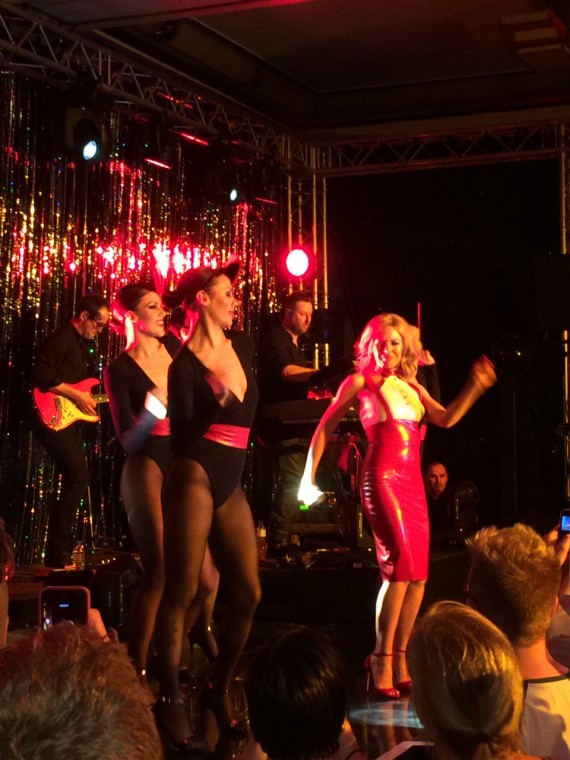 Kylie was natural and chatty with her adoring fans, making small talk, agreeing to pose for selfies in this modern social media demanding world. For fans like Lee Parkinson who had travelled all the way from across the UK, and been involved in a bus crash on route to the show on the M6- it had all been worthwhile when he was asked by Kylie to jump onstage for a selfie. A telling sign of how social media savvy Ms Minogue and her team are and also showing just how technology and social media has changed the way humans engage with every possible experience.

After a fast uptempo track Kylie smiled ”my album is out this week and I’m relieved, nervous and excited all at once!”

Last month during Brits week, any Londoner couldn’t have failed to see Mastercard Priceless posters all over the city, showing talent like Kylie, Laura Mvula and Pharrell with their fans when the music stars had surprised their them in private moments. What a huge high for any music lover! Kylie even shouted out her Priceless winning fan Adam, who she had surprised in his local gym (watch here ;http://www.news.com.au/entertainment/music/gymgoer-treated-to-surprise-kylie-minogue-performance/story-e6frfn09-1226830826119). Adam was obviously in the audience, again. Then she surprised another adoring fan – Gordon with a signed set list of the show as he was celebrating his anniversary and impending nuptials , and finally she announced that two unsuspecting fans would meet her right afterwards backstage in her dressing room.

Whilst Kylie’s by no means a renowned or exceptional singer, her tenacity and perseverance over the years has generated hits and fame and at best she is a very apt entertainer and throws a party onstage like no other encouraging her crowd to clap in unison with her, pointing out and acknowledging diehard fans and connecting strongly.

The Kiss Me Once tour doesn’t begin until much later this year in September, by which time fans and across the board music lovers will have had a chance to get familiar with the album. So this makes her small intimate, private gig in collaboration with credit card company Mastercard even more special and as they would say ”priceless” 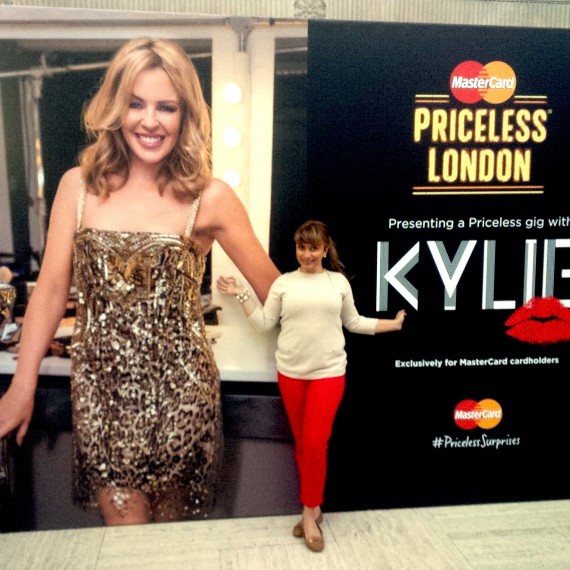 I’m often sneery and cynical about various corny financial tie ups between music stars and brands, but this one seems to be a sure fire winner.
A popstar flogging a designers clothes or perfume you may roll your eyes at, but a real intimate experience where the music act gets paid very well (in an era where the rest of the world is downloading and stealing their music daily), and their fans get to experience moments like this with the act they love for FREE, its #Priceless.