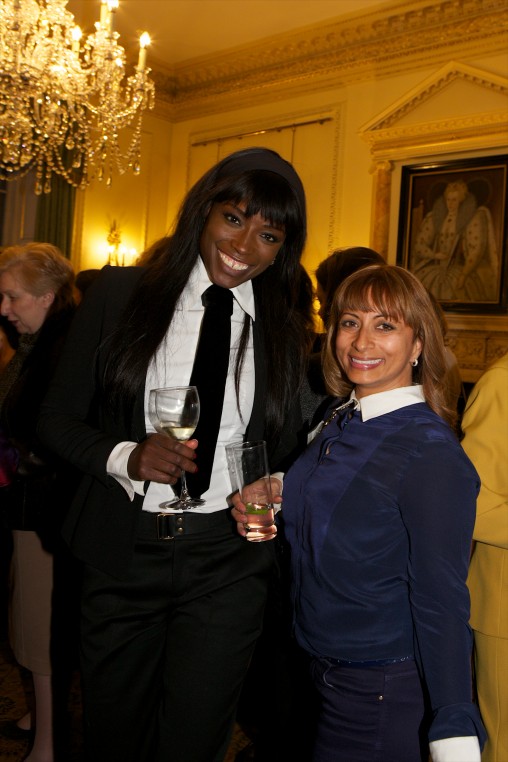 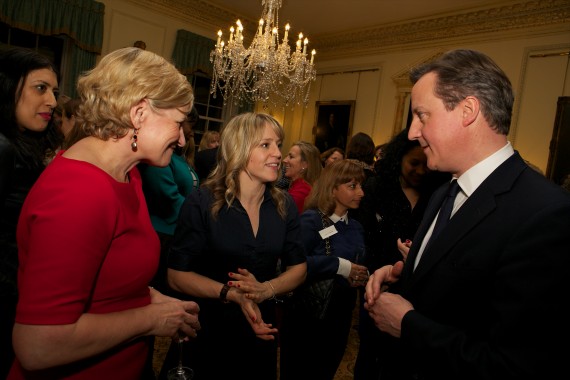 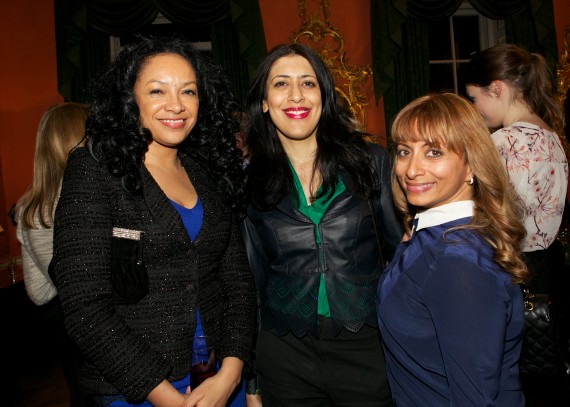 Still buzzing from my visit to Downing Street last week and meeting David Cameron, and many inspirational women like TV celeb chef Lorraine Pascal, I started this week at Wembley Arena for WeDayUK where thousands of school children from across the UK from over 400 schools were cheering as talent like George the Poet, Diversity, singers Jennifer Hudson and Bluey Robinson, Dizee Rascal, presenter Jameela Jamil, actors Shay Mitchell (Pretty Little Liars), Clive Owen, footballer Gary Neville, campaigners Al Gore and Malala Yousafzai and even royalty in the form of Prince Harry and his girl friend Cressida Bonas came together to educate, inspire and empower 12,000 student leaders to take action on local and global causes that they care about. 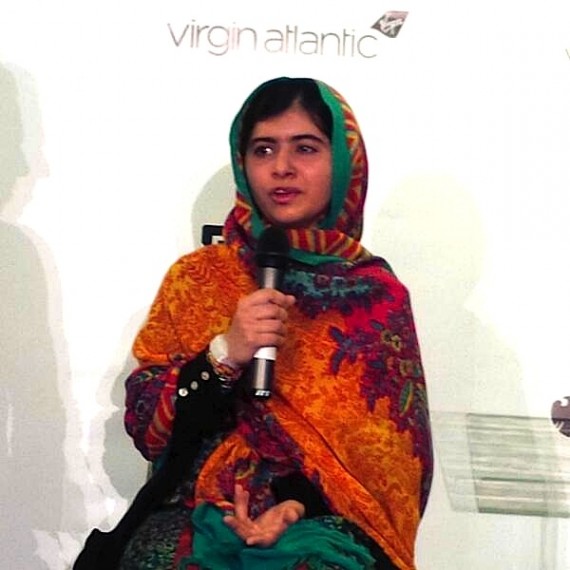 MALALA SPEAKS TO US BACKSTAGE AFTER HER SPEECH AT WEDAYUK.

‘’ Good morning We Day UK. For those of you expecting Harry Styles I apologise and no I am not going to sing. I feel extremely privileged and incredibly nervous to be here standing at the first We Day in the UK. Free the Children are a fantastic organisation it really is founded on an inspiring principle that children have the power to affect change. Every one of you here today has done something amazing to be here and you may not feel like it but I assure you that your actions can and will shape the actions of our future. After all we all share this planet together so we must inspire others to do the same. As you all know as it is easy to see the world around us is changing incredibly fast. On the one hand we are more connected the Internet is part of our lives social media has changed the way we communicate. What this means is in our generation although I am nearly thirty [pause] our generation has the greatest opportunity in our history to affect change on a global scale. However our society faces some very significant challenges. Each year approximately a hundred million children are affected by disasters like the Syrian Crisis. Over ten million children have had to flee that country; luckily for most of us here it is unimaginable for us to know what it is like to leave our home in the middle of the night not knowing if you will return. But closer to home there are communities in this country facing huge challenges. They rarely hit the news and for many young people in the UK live in homes where domestic abuse, violence and addiction are part of everyday life. Others are providing long term care for a family member, these issues and others like them can rob a child of their childhood.

And for you and in this way the biggest impact you can have is in your community. Sometimes the smallest things like helping someone cross the road, helping someone climb a flight of stairs, help someone lift their shopping into a back of the car in really makes a difference, it doesn’t cost a thing just a little bit of your time. Often without realising it those we admire most are people who are committed to helping others to giving their time freely to others to volunteering like you guys. Ever here has inspired others by what you have done what you are doing so please don’t stop.
If young people at risk can be identified early on then supported and mentored by someone who has grown up in the same community or had similar life experiences then it is possible to stop them going on in a downward spiral. The mentors I am talking about are not super human they are people like you and I who are willing to give a little bit of time to helping others. Everyone of you here is already doing great things like the hundreds of Diana award winners or the people .
Or the pupils from St Peters London Docks Primary School who are here. However it is important to get your friends involved too because we all know how valuable help and support from your friends can be. But multiple this what’s happening today by thousands and you can see that by coming together you can change your communities and beyond. If each of you here could get someone else you would change the lives of twenty thousand people. [2:29]
Some people don’t think it’s cool to help others personally I think it’s the coolest thing in the world. My father launched the Step up to deserve campaign last year and he thinks through this and with help and support from organisations like Free the Children we can double the number of volunteers in this country by 2020. Judging by the crowd in here today I think we can do it a lot sooner than that.
Congratulations to every single one of you what you are doing is absolutely amazing. Please don’t stop enjoy the rest of today. Thank you’’ 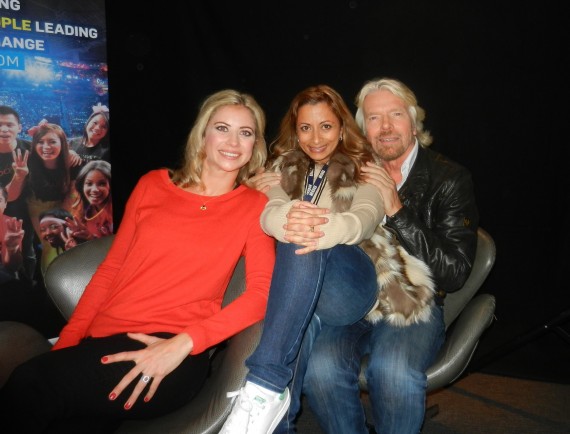 JASMINE WITH HOLLY BRANSON AND HER DAD RICHARD BRANSON AT WEDAYUK. WEMBLEY ARENA.

Sir Richard Branson’s daughter Holly is an ambassador for Free the Children and brought in all her contacts to support the annual event. I caught up with them backstage where Richard told me his favourite speaker was a no brainer

‘’ Oh I think it has to be Malala. I mean to have spoken out as a 13, 14 year old and asked the world to let girls have an education which they were being denied. Then to be shot and then to have come back really from the dead and to be able to speak so beautifully and eloquently to inspire the world to get rid of these awful prejudices against women was I had tears and I a lot of people around me had tears.’’

As Free the Childrens ambassador, It was Holly’s gig and she explained how all 12,000 kids had won a place to Wembley on the day

‘’ any young person has to find the cause they feel really passionate about and then they need either to volunteer or raise money, do sponsored silences, bake sales, school uniform days, raising money and just send it in to free the children!’’ 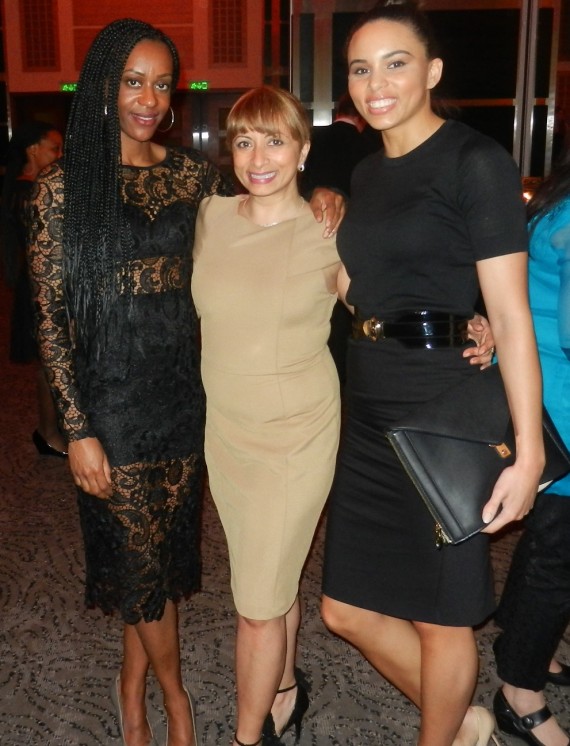 ABI OYEPITAN, JASMINE AND OLYMPIAN LOUISE HAZEL AT THE GET CONNECTED CHARITY AUCTION.

GET CONNECTED
A safe home is something we expect all young people to grow up in. Somewhere they are supported and great parenting and teaching meet their needs. Am I romanticising the past when I say that like most people of a certain age, I feel that I had a better-balanced childhood than kids these days?

There are half as many poor people in the world as there were in 1990.The average life span for women in sub-Saharan Africa has increased by 16 years since 1960. Seven of the world’s top ten fastest-growing economies are in Africa. The percentage of children in Africa who are in school has almost doubled since 1970. So for children globally the picture looks positive. But what’s the story here in the UK?

Apparently, fewer children globally now live in poverty, yet here in the UK their education is still being held back by poverty and disadvantage. While children are doing better than ever in school, not every child gets a world-class education. Many parents resort to food banks and school breakfast clubs, as they can’t afford to feed their kids.

I played on the street day and night with my mates with only two warnings; that I must follow the green cross code whilst crossing the street and not talk to or go with any strangers. Falling down and scabby knees were rites of growing up – it made us braver and stronger and we were proud of our scars. Children are no longer living their lives like children, going outside climbing trees, riding bikes, running around in the backyard, going to the park. Instead they’re locked up inside their houses playing Xbox or hypnotized by Facebook or playing “Angry Birds” on their iPads.We are always giving youth a bad rap. None of this is their fault.

More mothers as well as fathers are pursuing rewarding careers, but can find it hard to balance work and family life. Parents regret that their children do not play independently outside as they did when they were young, but worry about safety if their children go outside alone. Families are more aware of how to pursue healthy lifestyles, but too much time is spent in front of video games or the television and fatty foods mean that child obesity is on the rise. You walk through the street and everyone is trying to block their senses, completely disconnected from reality: sunglasses (sight), headphones (sound). We continue to give youth a bad rap. None of this is their fault.

Young people need to enjoy their childhood as well as grow up prepared for adult life. We want a society where young people feel valued and in which their achievements are recognised. So whilst I grew up I most certainly wasn’t bombarded with images that confused the hell out me. Nowadays, depending on which music genre or celebrity you’re into, you can be convinced that false hair, false nails, false lips, false body parts and so on are the be all and end all of life. The ‘pornification’ of young people, the need to only own designer possessions and the stresses of inner city urban postcode wars can leave a teenager bewildered and out of control. We are all responsible for giving youth a bad rap. None of this is their fault.

Can young people nowadays even breathe with YouTube millionaires and stories of reality show starlets being thrust into their vision at every TV, Facebook or Twitter encounter? In fact, if you’re not a CEO of your own company by the age of 23 aren’t you a failure? These unrealistic expectations and pressures young people face daily are piling up.

Last week I attended The Annual Get Connected Charity Auction, at The Grange St Paul’s, an exclusive state-of-the-art hotel on the doorstep of St Paul’s, where Get Connected’s Chief Executive Jessica Taplin told me that ‘’we know that 9/10 young people say that they have been online to try and resolve a personal problem, but going online carries its own risk and young people can find forums that worsen, not improve their issues’’.

Working in the youth media sector, I know that there are more opportunities for young people today than ever before. Literally thousands of youth organisations exist across the country to help young people make the most of themselves. Yet worries around sex, education, safety, image, self-esteem, social media and privacy are more serious than ever before.

If you’re young, life’s pressures are greater than ever before in the UK, but if you need help, for anything, get connected!

Get Connected is registered charity number 1081840 and depends entirely on voluntary donations. Get Connected is a key partner of Child Helpline International, a global network of 173 child helplines in 142 countries.