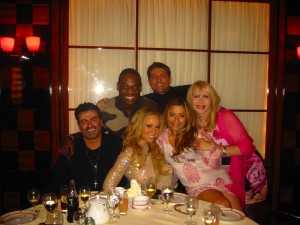 JASMINE WITH GEORGE MICHAEL AND FRIENDS.

Another hectic week as my new staff team of reporters for the MEDIA TRUST’S new LONDON NEWS SHOW-LONDON 360 started work with us this week. White City and Wood Lane have never seen so much talent! As well as getting to know my new team I was honoured to be asked to join a photo shoot and interview for OHTV and Pride magazine showcasing ‘’successful women of colour in media’’. It was an wonderfully fun experience which I will tell you more about in coming weeks. Next I spoke at a creative advisory board where new, young media moguls brainstormed future project ideas. Of course I couldn’t miss the Wiz Khalifa show at Shepherds Bush empire the next day! A couple of nights later I was at the practically impossible to get into IVY CLUB for the ‘’Give us a clue’’ club event. Celeb teams were headed up by celebs but I cant say whom as i’m sworn to the ”Ivy code of confidentiality”.

When the biggest, top of the PR media mavens- Hollywood legend ms Connie Filippello invites you to an event you can rest assured it will be big. Renowned for only accepting the biggest most exclusive clients like Mariah and working regularly alongside legends like Donatella Versace, Meryl Streep, Ursula Andrews, Joan Collins, Jerry Hall and others, Connie is as legendary in the showbiz industry as her clients. She doesn’t put on events in any half measure so when told by her that her client George Michael was having a press conference to announce something it was no shocker that it was to be held in the uber opulent Crush Room at the Royal Opera House.
If there was ever a man that could sing and have an automatic hood pass for his soulful voice and attitude for living life to its realest ,it would be for the legendary Greek originated, British singer , global icon,George with his 30 year career (he doesn’t look old enough!).
On arrival an old fashioned huge pack of paps and hacks, DJ’s, TV reporters, bloggers were pitched up outside and legged it inside to grab the best spots. All the seats and media platforms were totally rammed up and astonishingly whilst the conference start time was stated as 1pm, by 12.45pm the room was full, hushed and eagerly awaiting and seconds later a sudden thunder of shouting and yelling infiltrated our eardrums as in the next room photographers shot off their flashbulbs snapping and clicking away at Georges arrival for a good 6 minutes non stop!.

George bopped in a slick, very well cut suit and tinted shades looking healthier than ever and proceeded to announce he’s going on a tour. Not just any tour. Its called Symphonica; The Orchestral Tour. Always one top push his own boundaries and career he is undertaking an orchestral tour which will see shows take place across the globe including the Royal Opera Houses in London and Paris for charity. On the Parisian date he’s working with Carla Bruni on the charity “Born with HIV”.At the London Opera house it will be in conjunction with his former friend  Elizabeth Taylor’s charity.
He also refreshingly mentioned that he loves that lady Gaga and Riri have brought house/dance back to the forefront and that he is going to be exploring more dance and house music areas as its ‘’always been the gay music of choice.’ About the new material he admitted he will collaborate with many “gay friendly” musicians.
George told the assembled crowd -which included 3AM girls, Capital Radio DJs, Sky News, BBC News and reporters from across the globe that had been globe flown in – that he’s not interested in repeating past successes. He wants to explore orchestral and dance genres. He said he would perform a lot of his own material as well as other fave artists of his that have influenced him. Regards his past duets he revealed that his Aretha Franklin duet was a dream come true for him whilst the Queen duet was amazing and tragic for him due to his personal life issues and what he was going through at the time.
Talking about his troublesome past 12 months with negative press documenting his drug taking and other personal issues he confessed that he hates that every time he let’s himself down, he feels he also let’s young gay men down everywhere. On a positive note though he did add that he’s surprised by how supportive his fans continue to be especially since he’s made so many strong enemies. Considering he’s sold over 100million albums he remains surprisingly humble. Post conference I met new Calvin Klein model Seth and chatted to George Michael’s boy friend-Kenny Goss for a bit…..lovely folks!

To end the week I woke early on Saturday morning to travel into town and to get my overworked bones back into feeling normal again I went to the celebs favourite lady with magic hands- Nuz Shugaa at her Kingly Court salon. I mostly enjoy her treatments not just due to how good they are, not just cos loads of celebs and power players go to her (and I like staring discreetly at them), but cos I try and prize lots of celeb gossip out of her mouth. Alas for my nosy gene she never gives up any info! This time she insisted she give me an Argan chocolate full body spa scrub. She began by making me strip and put on a pair of paper panties. I chortled much as I examined the underwear and settled myself onto the massage bed. She began by firstly applying coconut and walnut cleanser which was massaged thoroughly in upward strokes all over my body (front and back). She explained that she makes all the scrubs herself. Next strawberry and tropical fruits and seeds were rubbed all over me in circular movements-it was all I could do not to lick my own skin so tempting was the aroma. The next step saw Nuz apply salt glow (once again made bespoke by Nuz in her secret organic laboratory) with melting Organic chocolate ,Argan oil and Geranium full of anti oxidants scrubbed all over me. Finally hot cloths were used to remove all my dead skin by her and her assistant so 2 pairs of hands were all over me. Smile. I was pat dry and my body was infused with an Argan oil, African Potato and Green Tea mixture to bring my skin to life. Nuz finished up by massaging me well and buffing me off! I was treated to a champagne flute of organic pink lemonade straight afterwards. At my lunch my companion couldn’t stop commenting on how great my skin smelly-totally worth the early rise!
Now i’m off to pack my suitcase for a very fabulous moment! More juice next week!