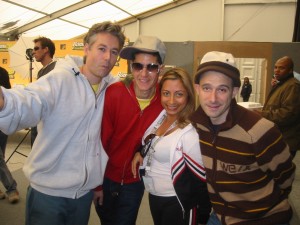 JASMINE WITH HER OLD MATES- THE BEASTIE BOYS

Well we’re all finally over the Royal wedding. The Grace Kelly dress will hopefully encourage young ladies nationally to keep it classy. Sister of the bride Pippa was catapulted to instant sex symbol levels as her spray tan and booty fitting dress had males across the land frothing at the mouth. What a fake tan will do eh? Daily pre-wedding,Pippa was in the papers with Kate and no one batted an eyelid. As soon as she was painted brown wearing a dress cut for her body hearts stopped. Um fellas why not try the original brown gal. It doesn’t rub off on your white sheets. Similarly Harry suddenly reached heart throb states as every society chic and hood rat decided she would make a beeline for the only remaining bachelor in the Royal fam. Did anyone else notice he actually bopped up the aisle? Have you seen the pics on the internet of him partying with Puffy and Kanye in the past? My mates have laid a bet that Harry’s wifey will be mixed race or black. And wasn’t his black uniform a lot more dashing than Williams?  I had a sweep-stake on what colour the Queen would wear and I was right with my canary yellow prediction. How unfortunate that Fergie and Andrews daughters Eugenie and Beatrice turned up looking like the ugly sisters. Don’t they have mirrors up in their crib? Did anyone else note that The Mall had all the road bollards and crossing lights removed? Is that so the Royals can use The Mall as an emergency flight runway? Kate was so graceful throughout. How dignified and elegant she was. It was as if she was the Royal supporting William on the big day who looked at times nervous. The balcony kiss was a bit quick for my liking. I would’ve liked him to take her by the back of her head and lipse her up good and proper leaving her breathless a la Brett and Scarlet in Gone with the Wind. Good luck to them both. William’s finally brought the Royals some good PR by getting with what the tabloids keep referring to as a commoner.  By the way, how proud were we to be Brits that day? Hundreds of countries across the planet were airing the whole wedding on numerous channels. A little island like ours sure has a worldwide grip with our events. America may have Hollywood but we have Royalty. We win!.

Clearly there was too much love in the air for the universe that day as a mere 24 hours later the world was gripped as the unbelievable news that the worlds number 1 terrorist Osama Bin Laden had been killed. What can I say that hasn’t already been said? Pakistan really say they weren’t aware he was living there? America clearly had no trust in their ‘’ally’’ Pakistan as they weren’t alerting them to their strike. The navy seals buried him at sea? Really? It’s a conspiracy theorists dream! Whatever your thoughts are on the whole sorry saga, remember that our western media feeds us very different facts and viewpoints than the middle east and that we should always keep a balanced view, question everything and accept that we will never know the truth with so much going on behind secret closed doors.

The Olympics are fastly approaching and I for one can’t believe the f@@@ery of this government. How can Londoners be bank rolling the event yet we cant get first dibs or discounted tickets? Cheap, limited view back seats are £20, good seats are £2000. £2000!? Really? Really? How can you justify an event for the all the people of the country that is inclusive to all yet only the rich or corporate companies can afford to attend? What a farce!. Boris Johnson needs to step up and sort this-Londoners are not happy.

I was reunited with my old nemesis-one of the first white groups in rap history-in fact one of the first rap groups period- the Beastie Boys. With their early success they played a huge part in turning DEF JAM into a force to be reckoned with.  Years ago in 1994 whilst I was a presenter on Channel 4’s THE WORD they joined me live from their stadium show in Budapest where we stood on a snowy rooftop to do a live TV link back to the UK. Off air we were chatting away nicely. As soon as we went live, the boys started speaking to me in a non-intelligible gobbledegook. So embarrassing!. I didn’t forgive them for years. Even during my MTV days I repeatedly gave them hell as pay back. They were notorious even back then for giving the media a hard time with their naughty antics in interviews. Luckily they’re a little more chilled now that they’re grown with families and responsibilities. Now they’re back wit their latest album ‘’Hot Sauce Committee Part Two’’-their first hip hop album in 7 years!. Part 1 was supposed to be released in 2009 but never came to light as Beastie Boy Adam ‘’MCA’’ Yauch’s cancer battle intervened. The new music is good no doubt but my nostalgic side craves their old style of hilarious lyricism.  The beats are still dynamic and racy with hard delivered verbals and the music still sounds classic, vintage and relevant , this group has always quite rightly embraced their own sound, so another classic from a group that refuses to fade away-something their fans are happy with.

The Eddie Griffin comedy show , hosted by Harmony Productions at the 02 Brixton Academy was a total sell out with road blocks and endless queues at the venue pre show. Richard Blackwood hosted whilst regular London comic faces Kevin J and Eddie Kadi warmed up the crowd for the first part of the show. Eddie Griffin started off strongly as he was very current with jokes about the Royal Wedding and Osama but his set quickly grew tired as he relied too much on his use of expletives. Years ago a loud American comic screaming the N word and mother f@%&*@£ would have us in stitches cos we just weren’t used to it but now with everything on youtube and American culture being so dominant in our culture this just sounds desperate, old and tired. His material had potential but with his delivery being pretty slow and dragged out with him needing to smoke and drink constantly onstage it was draining. A few people in the audience actually nodded off!. Eddie was once a very talented live comic but like many of his U.S counterparts I think when they come to the UK they expect automatic reverential treatment maybe not realising that we have a very high standard nowadays. In fact I’d go as far as saying that I thought out British warm up acts were stronger in pleasing the crowd. Having said that, the night itself was well organised and a good evening out. The question is now that British audiences know we have a high standard of comedy in our own country can we have our own talent headline a venue the size of Brixton and expect it to sell out?