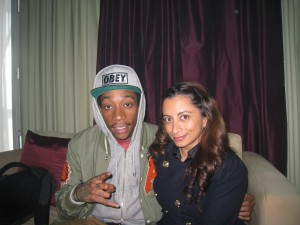 I remember a time when all the TV, print press and radio I worked for encouraged me to keep my content national or international so it was as big as possible and inclusive to allwhether based in London, up north, around Europe or internationally.
Now that wave has turned and with governments and local boroughs all talking in the latest buzz wordspeak which always includes the phrases ”Big Society” and ”local community” its a new day. If I’m totally honest (and aren’t always?), I’ve only ever championed and cared about the goings on in the city that I live in and love. As if my fairy godmother heard and acted upon my subconscious universal outgoing message, I find myself on the brink of a new regular 30 minute TV show that’s made by new, young reporters, solely focusing on London and championing the capital cities stories. Whether big or small, celeb focused or community focused, it’s all about unashamedly putting a microscope on London and highlighting news and events from a real Londoners point of view. Bliss. If you see the LONDON 360 camera crews out there show them some love!.

A night for decisions as I was invited to both the Wiz Khalifa and Snoop Dogg shows on same evening. Decisions, decisions. One a legendary hip-hop icon that I’ve worked with numerous times over the past 2 decades- (in fact it was my CNN interview outside a Los Angeles courthouse after Snoop Doggy Dogs (as he was known then) murder case that helped promote me here in the UK). The other a new young champ to Europe’s shores that had the modern urban generation excited and had breathed new life into the game that I’d not had the opportunity to experience live yet?. Clearly I had to go and watch Khhalifa. Snoop-I decided- had hadenough of my time and attention over the years and I could probably list hiswhole list in order so many times have I watched his live show. I had been to meet Wiz Khalifa earlier in the day and his confident, friendly, articulate manner immediately struck me and I was intrigued to learn more about him and see if he could indeed holds a stage presence the way he could a 1-1 conversation. On entering his room escorted by his record label rep –the legendary Taponeswa Mavunga- I was immediately struck by both his extremely tall, lean height and the strongest ‘’aroma of the West Coast’’ juxtaposed by a haze of smoke. I wasn’t in the room very long but I still stunk of the green stuff when I returned to my Wood Lane desk! I was concerned for his label rep as she’d been in his company all day! He liked my military jacket and was highly Intelligent-considering how much west coast oxygen he was getting through! And so I found myself with my industryfamily down at Shepherds Bush Empire the same night. On arrival it was apparent that this show and artist had high expectations. The venue was packed. Sold out totally and full of a very fresh, hot, young crowd. Our very own superstar Wretch32 was opening up and as many had come to see his set as Khalifas. Wretch tore the house down which even early on was packed to the rafters. After Wretchs set RADIO1Xtra’s Semtex did a short set which had the crowd hyper and excited before the main mans moment. In the audience were loads of notable folks like rapper Sway, KissFMs DJ Manny Norte, female artist Baby Blue and Master Shortie. The main thing that was apparent once Wiz finally hit the stage is that he has immediate and electric stage presence.Able to get the crowd on side from the get go, he danced, bopped, bounced and skanked his way through an hour long set briefly stopped midway through a song to kiss his girl friend side of stage- (Kanyes left over-‘’model’’ Amber Rose). To my old skool ears his sound and stage vibe really reminded me of a beautiful mix of Bone, Thugs and Harmony, Andre 3000 and Kanye. 45 minutes into Khalifas set I heard that Snoop still hadn’t entered his forum stage and that the forum crowd were becoming restless and impatient-clearly I had made the right choice that night`! As Khalifa’s final song-his hit ‘’Black and yellow’’ was nearly done I suggested to my people that it was probably best we sneak out now before it got crowded and we were forced to chat to all and sundry. As we exited the venue to stroll back to our car the stage side door behind suddenly slammedopen and as if in a surreal dream we watched as 2 police, two 02 venue security, Wiz Khalifa and a gigantic security man carrying Amber Rose legged it out of the venue and were bundled into a waiting car ready to speed them off. The irony of the fact that security was protecting and escorting Amber moresafely than the main man was not lost on me. Amber in her tight dress and high stacked heels couldn’t have made the run. But whilst Wiz is connected to her he has ‘’brand Khlaifa’’ locked down on the things every big urban act nowadays needs. Great music. Check. Legions of fans. Check. Stage presence. Check. A celebrity controversial girl friend. Check!. 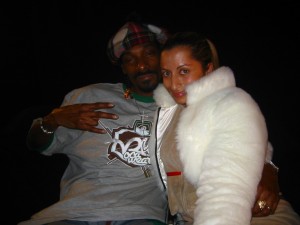 JASMINE WITH HER OLD COMPADRE-SNOOP DOGG

Across town at The Form I was told by my former assistant-now ITV girl Jennifer Adeeko- that Snoops opening act-Beanie Man was great but that the crowd weren’t happy that Snoop didn’t get onstage until 10.20pm-over an hour late and luckily for him all tardiness issues were forgotten as he was welcomed with nothing but deafening cheers. Sporting his signature 2 long plaits, blacked out sunglasses and dressed in all cream Snoop hit the stage with his 3-man crew including rapper Kurrupt, 3 dancers dressed in Addidas tracksuits and big rope chains reminiscent of Run DMC’s early days, 2 bodyguards either side of stage and what appeared to be a group of ….lets call them….’female fans’ , towards the side of the stage excitedly dancing to the music. Snoop started off with well known, familiar songs like ‘PIMP’ he then went on to ‘The Next Episode’ which had his dancers scantily dressed and provocatively dancing around him. The crowd was going crazy for the ‘Doggfather’. Poor Jennifer was shocked by the amount of swearing but admitted ‘’it felt right’’ LOL. Snoop went on to perform classics like ‘Gin & Juice’, ‘I wanna love you’, ‘Sexual Seduction’ and his most recent song with David Guetta ‘ Wet’ where there was certainly a lot of fist pumping going on in the air! The crowd were jumping in the air, waving their hands from side to side and this energy doubled when he performed House of Pains ‘Jump around’ and the monster of a hit that was ‘Drop it like it’s hot’. Snoop made full use of an onstage throne to chill in once in a while and when referring to why he hasn’t been allowed to come back in the UK in so long, stated ‘’f@@@ the police’’ in a light hearted aside.
In the middle of the concert you got to see a softer side to Snoop where he had a moment of silence for the late Nate Dogg, and also dedicating his time to recite Tupac and Biggie Smalls songs in remembrance. With the echoes of Snoop singing bad boy in true Diddy style, you would never think a couple of decades earlier there was the east coast west coast divide between BIG and Tupac’s crews. There was definitely a satisfaction there of knowing that rappers really can unite. Snoop ended the concert with the timeless classic that is ‘What’s my name’ and with finished the concert exactly an hour after it started, it definitely left you feeling like you wanted more. Some of Snoop’s last words were ‘Keep some weed in your life’ which had the whole building in hysterics. The beauty of the concert was that you can clearly see that Snoop still loves what he does, passionatelyreciting his lyrics and fully involving himself with the dance moves and interacting with the crowd saying how much he loves London, England. (Americans always say London followed by England for some reason). 2 nights later I was invited to watch him on Graham Norton where of course he charmed the socks of everyone. Hip-hops come a long way. It feels good to be mainstream.
Did anyone see the Graham Norton show where Gwyneth Paltrow recently rapped a whole 2 verses of NWA’s Straight Outta Compton? I became an immediate fan. She was good! On the same show Lady Gaga was treated like royalty as if she were bigger than Gwynnie. I could just imagine Gwyneth thinking ‘’my mate Madge is the original Gaga darling!’’.