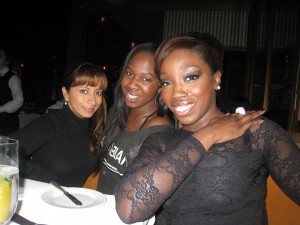 I’ve spent hours this week trying to explain to young people that nothing comes without hard work. So many young people reach out to me for opportunities and expect instant reward and fabulosity. Life doesn’t work like that. I receive e-mails from students that are professional therefore I put them on and give chances where I see them. I also get texts and e mails from randoms that I would never bother replying to. They say things that are unprofessional and over familiar. For example this week. ‘’Whattup Jasmine. I wanna do a job like yours so I need to do work experience with you, can you call me on this number and let me know when I can come to a party with you and see what’s what’’. Hilarious!.

Readers, after my school exams, a levels and university degree I taught dance and aerobics for years whilst juggling my runner job at a TV company where I did gruelling night shifts photocopying, driving, collecting meals and drinks before being the opportunity to prove myself as a floor assistant on a morning TV breakfast show. Thereafter I have done a variety of presenting, producing, directing, scripting editing jobs at a number of TV companies that involve long hard hours of work and constant preparation. The harder I work the more gets offered to me and the luckier I get with my social life being blessed too. Nothing comes easy. All good things do not come to those who wait but to those who work. Excuse my rant but often we can’t believe the slackness we see professionally.

This week when not juggling writing and work commitments, I had a good old laugh at comedian Kojo’s Comedy Fun House as he gave me a table at Sound Bar. Next it was a sumptuous dinner with Adidas head celeb honcho Paola Lucktung, before trekking up to Hackney to see my friend ,one time presenter and dance partner Kat in Jack And The Beanstalk. I ended the week going to a private party thrown by party man about town Tim Wade for his mate Will I Am and the Black Eyed Peas at nightclub Cirque.

My West London sister Estelle flew into town for one night only (as your average superstar diva does), for a show at Hammersmith Apollo with John Legend and The Roots, we had post show dinner at Almada- a restaurant so stush that there’s no sign outside, it looks like a private home in Mayfair and you need a password to get in. I guess this is how the people that move in high circles stay amongst their own dahhlings. Estelle as usual looked classic yet fly in that unique way that only she does and treated her sisters and friends to dinner and some very dangerous looking red shots she fondly called ‘’red snappers’’ that were bourbon and cranberry juice. We debated the usual: music acts, boy friends and fashion before shoving her onto her plane back to her New York home.

After that I had to organise a Sunday afternoon bowling session for 30 people where we took over the lanes and screamed and shouted lots. I had a non-strike game which had me mortified so I blamed it on the 4 year old daughter of a friend that ‘’had been taking my turn’’. Cringe. I hate losing, at anything.

Straight afterwards we attended the comedy roast show at Shepherds Bush Empire where ex Eastenders actor Mohammed George aka Gus the road sweeper was the nights victim. Comedy Roasts feature a panel of comics all lining up one after another to cuss and embarrass their subject. As you can imagine Mohammed was an easy target and whilst I was anticipating chortling at his discomfort-which I did-I actually warmed to him after the show. The comics firing Gus were MTV BASE’ Kojo, BBC impressionist and sketch writer Jason Lewis, Baba Tunde, Kane Brown, female Felicity Ethnic, white comic Kevin J and host Richard Blackwood. Part one of the show saw the comics all do a quick stand up set and part two was when they all went in on Gus. Relative newcomer Kane Brown was up first and in all honesty-not that funny, a little awkward and stilted, next was Baba Tunde who was hilarious as was Jason Lewis who wasn’t just funny but cutting and original too. Jason cussed his fellow comics too which started a whole car crash of bitching between them all. Jason accused Kojo of being a joke stealer, Kojo accused Jason of being a nobody, Jason cussed Richards presenter to music transition, actually EVERYONE cussed Richards music career, and part in a recent theatre show and it doesn’t help that he’s now going to be playing Donkey in the West End musical of Shrek. Baba tunde and Jason were the strongest having the audience rolling in their seats with very well written, original, side splitting material. All in all the comics cussed each other more abusively than they did Gus- shake my head!Truly an amazing night of entertainment! 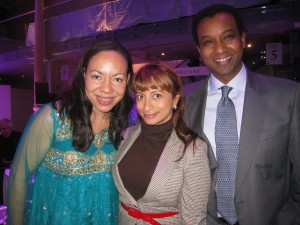 Then it was time for THE ANNUAL CULTURAL DIVERSITY NETWORK AWARDS 2010. It’s the second one ever. Last year was hosted by Alan Carr at Channel 4 headquarters, this weeks was hosted by Gok Wan at the Royal Opera House. Apparently Channel 4 diversity officer Oona King (who was wearing a turquoise Indian salwar kameez on the night) pulled some big strings to get the venue, which was beautiful. The CDN Network is made up of all the major TV broadcasters and for the past 2 years has been looked after by Channel 4 who on this night passed the baton to the BBC who will run the ship for the next couple of years. Gok Wan wasn’t as raw and fresh as Alan last year who had us all rolling with his freestyle political incorrectness. The 3-course dinner was interspersed with the awards, which included most ground-breaking programme (awarded to My Big Fat Gypsy Wedding), breakthrough production talent (awarded to Tamanna Rahman) and company of the year (awarded to Bwark Productions). The dinner menu was simple but fresh and tasty- mint and goats cheese salad, sun blushed tomato stuffed chicken and a rhubarb parfait finished off with coffees.

I caught up with the delightful ITV News presenter Charlene White who looked gorgeous in a classy red dress, T4 presenter Rick Edwards who looked dashing in his whistle and flute, actor Omid Dgalili and presenter Anita Rani presented awards alongside news correspondents Krishnan Guru Murphy and Rageh Omaar. Both these men astound me with their articulate and concise news reporting skills-I was honoured to be in their company.

Lenny Henry also presented an award getting it wrong with his misinformed jokes again. Something about the Royal Opera House having not ever seen so many black faces. He clearly isn’t aware that loads of urban music, break-dance shows and similar events take place there and have been for many years that attract numerous black people. Clearly most of us have moved ahead leaving him stuck in his eighties joke world. Double cringe. The night was extremely inspiring and its heartening to note that there is a huge group of talented people out there in the media whop like me feel very passionately about bringing a diverse group of people into TV that wouldn’t usually have an opportunity to join this world. If you’re looking to get into TV and have found it difficult thus far you might want to look into the Cultural Diversity Network-I cant recommend it enough as a proactive organisation that’s helping change the face of media as I know it.