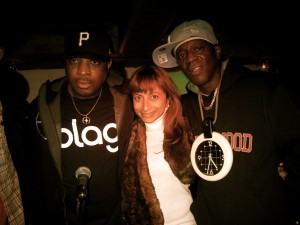 Okay don’t panic but its nearly that time of year where nuff money must get spent, gifts must be pondered, bought and wrapped, more layers must be worn, and excitement must be planned to within an inch of our lives! I’m exhausted just thinking about it! This weeks been full of scripting, writing columns, cooking for dinner parties and kicking orange autumn leaves around outside. I know, I’m a sucker and most appreciative for the wonders that surround us daily that god has bestowed on us. And I am totally sober writing this too!. Its true. I love life!

I did have some fun moments though- work is just something I do in between fun- one of these fun moments including a private invitation and audience with the legends that are Public Enemy! Chuck D and Flava Flav held a very intimate gathering of family and friends in Shoreditch in an underground basement where they talked to us about their current lives, the past and then finished by performing all their hits to us! It was surreal and a once in a lifetime experience. I wasn’t a huge public enemy fan at school as my then boyfriend played them 24-7 and quoted lines at me in his very hardcore pro black manner. But now years later I TOTALLY appreciated their intellect and songs. Twins Sarah and Sally from BLAG magazine had organised the night after doing the bands publicity for the past 12 years- they’re also known for throwing parties and DJ’ing for acts like Lupe Fiasco, Red Hot Chili Peppers and James Brown to DJing for Pharrell and Nigo and N*E*R*D to name a few. Clearly the BLAG mag twins and Public Enemy are the best of mates apparent by the warm banter between them all on the night. Sarah told me that on this short trip they ‘’ thought it would be fun to tackle it completely differently, no press releases, no junkets, just getting a great group of people in one room for a memorable experience – to meet P.E, hear all about them directly with a Q&A and a secret performance’’. Guests included press, radio, TV, DJs, UK talent, influencers and the idea was to give people an experience they’d want to talk about afterwards and we did!. Its also very clear that Chuck and Flav love to meet people! They spoke to us first with chuck leading in his charismatic manner whilst Flav as usual provided the perfect sidekick with his extrovert crazy self.

Chuck said the early years of hip-hop were memorable because ‘’We were happy to be travelling the globe- we were amazed that fans just turned up’’. Chuck added that he was pleased so many media had attended the evening as ‘‘its Journalists job to report about real hip-hop as well as new stuff’’.
Chuck revealed ‘’There’s a standard in this hip-hop game we continue to represent and we’re gonna show people in Africa this month what its about when we go out to Nigeria for the MAMAs- MTV AFRICA MUSIC AWARDS’’. Chuck and Flav reiterated that they didn’t believe in needing passports to travel across the planet as the earth belonged to us all and that border controls and ‘’ Governments split people up-cultures bring people together’’. Speaking about young people, hip-hop and entertainment now as to compared back in the day chuck stated ‘’
These days drugs liquor and alcohol are the stars of the show cos the audience can’t rely on the talent onstage to be entertaining anymore so they have to rely on those extras to ensure they have a good time’’. I couldn’t believe he said that as that’s what I ALWAYS say! .

Regarding reality shows chuck insisted Flav couldn’t be put in the same category for his ‘’Flava of love’’ show as your average reality star because ‘’Flava flav has a real background and talent. I don’t know what the hell Paris Hilton and Kim Kardashian do except just be’’. Flav spoke on wanting to get back home ASAP now as he’d been on the road a while and ‘’needs sun as he’s getting lighter!’’.

Chuck also stated his thoughts on expanding ones mind ‘‘unless you travel and leave your block you won’t move forwards’’.

Chuck added that he alone has filled 3 passports from his travel. Unlike many of the younger acts these days chuck understands the equal importance that press and media play in an acts career ‘’ We gotta come back with good music to please you the DJ and journo’’. Well noted sir-well noted!.

Chuck also revealed “I’m the only one in the collective that doesn’t play a musical instrument-i can’t even play the state lottery, on the other hand Flav plays 15 instruments-keys ,drums, piano, trombone, French horn, cello, tuba and more!’’. Flav smiled humbly but added ‘’but I don’t know how to read music, I play by ear’’.

Not threatened by new younger artists Chuck confirmed ‘’There’s a certain language you use to reach the adults and different lingo to reach the kids so we don’t try to emulate the new acts. Rhyming now is so elementary with 30 year olds rhyming like a 12 year old’’.
When pushed though the boys didn’t comment on names just exchanged knowing looks. We could all guess the acts they were referring to.

When someone asked why years ago Public Enemy expanded the DJ, mic and turntables set to include a live band instead of keeping the rap art form raw chuck defended his moves explaining ‘’we chose to add live instruments cos it became very limiting- just a raw mic was punk like but we needed to move on and couldn’t have done that without instruments’’. Chuck recalled that when he suggested that the act include live music Flava Flav was suspicious and unenthusiastic recalling ‘’Flav was the same, he asked me ” what u bringing these band motherf****** around for!”  Chuck recalls meeting Flav in the studio for the first time years ago recalling “he had a black geri curl, I said you can’t smoke in here!’’.  Flav laughed  “I’m grateful for a lot that chucks father taught me, my crew are best in the world, I wouldn’t trade them for anything’’. Then Flav took over with his excitable self telling us at length about ALL his other current and hypothetical new projects like “La Flav spirits” with a variety of flavours like cherry, berry ,olive ,sweet tea, bubble gum and more. I also have La Flav cognac ,also Chateau La Flav wine, also a couple of movies, and I’ve just finished doing voice overs for an American cartoon “Yahoo and friends”
, and I have a new Flava Flav cartoon, I’m also launching a line of Flava sharkskin wear…….’’. At this point we wrapped it up and let the legendary twosome perform their greatest hits for us during which they sounded as fresh and exactly as they did years ago on wax-it was breath taking! Then as we clutched at them for photos, shout outs and more they managed vto escape for their gig the same night at the 02 where they proved to me beyond a doubt that whilst I have the utmost respect and champion all the new young British acts that are doing so well right now, they really cant be tested against the live presence and articulate skills that the old skool acts that week showed me. The manic, passionate energy and vibe of Red and Meth, the untouchable intellect of KRS-1, then finished up with the iconic hits of Public Enemy. It was no competition. Old skool wins!.