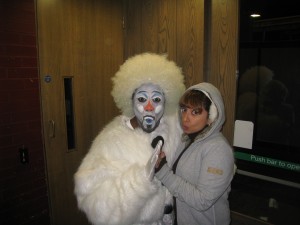 So the countdown begins-it’s a week until Jesus birthday!

This week I’ve had to run around doing chore after chore, I’ve been interspersing fabulous and basic. FABULOUS=I’ve been juggling a few different staff parties- trying to appease various bosses when I cant attend every function because they all clash (but the ITV party was definitely the best!). BASIC=my library books had to be returned –oh yes-I STILL belong to the local library. My mum got be interested in books very early on and its always a treat so I buy books I want to keep but I also regularly borrow books-what a luxury!.  FABULOUS=On Monday night I popped into ringtone/luxury goods guru Alexander Amosu’s party, the day before we were at a friends and family Christmas drinks at Paul H-(hip hop photographer of this generation) home, FABULOUS=then we had our girly Christmas dinner at skylon at the royal festival hall- brilliant views, average food. BASIC=

Then I made my 6 month regular dental appointment – good healthy, strong teeth are one of life’s essentials-after all who wants dentures when they hit old age-yuk,not me! FABULOUS=then fresh breathed I ran up to a studio in Kentish town to join music artist Emanuel jal to feature in his video shoot (more on that next week!).

I was most excited about going to see 90’s ladies perform at the 02. First up were girl band SWV  (Sisters with voices) the original line up-  Coko, Le-lee and Taj. They were cool, fly, fresh and had bundles of attitude back in the day with hit after hit so I was not missing the original trio doing their thing. They looked beautiful, sounded as good if not stronger than in their hey day and really rocked the venue. Hundreds of fans looked ecstatic and sang along word for word to hits like ‘Weak, I’m so into you, you’re the one and more’.

The headlining act on the night was one time bad boy artist and former wifey of the Notorious B.I.G-Faith. I must confess when I first heard that Faith was headlining over SWV I did a double take!? After all Faith has a gorgeous voice but SWV had all the hits. Oh well, I was open to the show as SWV had kicked it off so strongly. I had faith but alas it wasn’t enough. Faith doesn’t have immediate hits that spring to mind but has always been an amazing performer. Her vocals sounded strong but her heart just wasn’t into it. Her stage presence and organisation was bad and she continually went off for breaks and blaming her band for putting on the wrong backing track versions and so on. She was disappointing.

I finished the week off by indulging my child side and going to panto at Hackney Empire. Did I really? Oh yes I did!! Former MTV BASE and CHOICEFM host Kat was playing the snowman in Jack and the Beanstalk. Yes you read correctly. There’s a snowman in Jack and the Beanstalk. I haven’t been to a panto for years so didn’t realise there’s the main story as we know it, and then there are the ‘other characters’. I adore the Hackney Empire. So many great shows, talent and memories from watching the stage as a kid at the 291 Club to modern day where I’ve stood on it a few times myself. The cast for the panto were all very well rehearsed and professional. Kat was hilarious as the Jamaican snowman with his patois accent and white afro wig!.The star of the show was undoubtedly the panto dame who had us all roaring. The sets were pretty breath taking for a non-West End theatre but it was the emergence of the giant that was most impressive. A real giant. Huge .ginormous. humungous. There weren’t many men in his costume. Nor did he look mechanically operated. I was fascinated with how they achieved that. The story line was both entertaining and amusing to very young kids as well as the odd adult humour gag chucked in every now and again. If you’re looking for a traditional panto with an urban flavour (the occasional street slanguage phrase and soca track thrown in) then take the family and friends to see this!

This next week’s full of festive activities. First on my list is the Ultimate Boogie Nights show at O2 where Sugarhill Gang and Evelyn ‘Champagne’ King are performing and then it’s on to my mate Idris Elba’s (Stringer Bell in The Wire) London Christmas party before I head off to be with my Christmas family.

At this time lets not forget that whilst life is about being the best human being we can be and having fun is essential- life has light and shade and whilst some are laughing others are crying. Many people around us wont be full of Christmas cheer due to their personal circumstances whether they are incarcerated (I see you and read all your letters-thank you!), lost a loved one (I know many of you have recently), and this year will be their first alone without them, financial woes due to redundancies and so on (its affecting us all!), illness with loved ones (always within our circle) , poverty, aged folk and so on. At this time lets show seasonal good will and spirit which has gone down the pan in recent years and do just 1 good deed for another fellow human being that will be grateful for that chat over a cup of tea, a goody bag full of cakes and fruit, a kind letter or phone call or a grocery shop for someone that cant get around easily. I’m off to do the big shop for my dads retirement home and help them put decorations up and will then pop into friends for tea and cake- quality time is worth much more than material gifts so this season give someone yours.