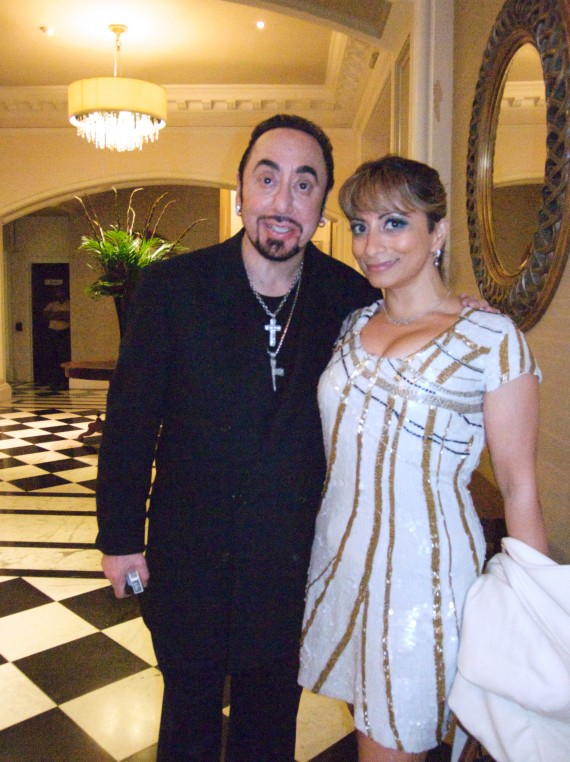 Its easy to become complacent about fabulous events in London town as there are so many every week, but once in a while one comes up that still excites everyone and has the whole city buzzing. One such event was the film premier for ‘’MICHAEL JACKSON- THE LIFE OF AN ICON’’ (a David Gest production) that was held at the Empire, Leicester Square. As you can imagine it was pandemonium in the square with security, fans and tourists all bustling through. The red carpet was heaving with celebs but we all persevered through the rain and finally found our seats. I had kindly been given a set of 10 tickets for the film premier and the dinner afterwards (worth £15,000!) at the Connaught rooms and invited amongst my guests music manager Richard Pascoe, graphics design guru Troy Davies (Interscope), the D&G celeb team ladies Ruth and Chandni, former Honeyz lead singer Celena and her man, celeb facialist Nuz Shugaa and PR maven Jodie Dalmeda. Sitting next to us was magician Dynamo and just behind us MOBO’s Kanya King and BBC reporter Brenda Emmanus.
Michael’s sister Remi and brother Tito Jackson along with one of Michael’s closest long-time friends David Gest did the film intro onstage and Michael’s abuse-trail lawyers including Susan Yu (who proved MJ innocent in court) were also onstage all talking about Michael and their favourite memories and anecdotes about him which was lovely as it reminded you of how human he was. . David Gest interviewed the Jackson family members about the innocence of Michael Jackson. Lawyer Susan stated ‘’There was no doubt that Michael was innocent when we 1st met him”. She added ‘’Martin Bashir was a disaster and refused to answer q’s”.
They told us that in the recording studio “Michael would jump onto the studio desk and dance and scream his songs until the speakers blew up. That’s how he knew he had a hit”. Tito revealed “Michael had 7 Bentleys and offered me one, I said Michael I cant take your Bentley-Michael said sure you can and so I took the one that had been signed by numerous stars like Beyonce…and.(he hesitated)…Liza Minelli..LOL’’. David Gest and the audience laughed as Tito paused before mentioning David’s ex wife Liza! The MJ film is fascinating. What a man. What a life. How hounded he was by vultures. It also included many amazing anecdotes from his friends and family over the years. A totally powerful and mesmerising film. Michaels mum Katherine said ‘’it’s a truly remarkable film that captures the true character, wit and sensitivity of my son. Producer David Gest takes you on an emotional rollercoaster that will bring people to tears as well as really understand who the man behind the music was and is’’.
Straight after the film the entire cinema load of tuxedo clad men and ball gown draped ladies trotted up the road to Covent Gardens Connaught Rooms for the star-studded gala reception, where the paparazzi were out in full force snapping away. 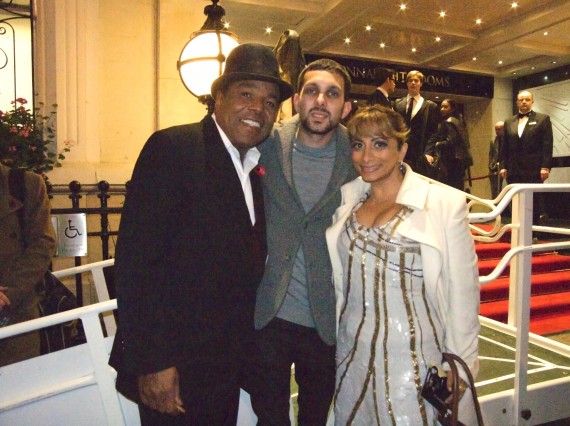 Outside I caught up with Capital Radios entertainment reporter Kevin Hughes before a pap asked me to pose alongside Tito and Dynamo. Anytime this happens I cringe inside wondering if they’ve mistaken me for someone else and how peeved they’ll be when they realise they have a nobody in their press photo LOL. David Gest and his friend –man about town-Imad Handi -greeted and caught up with us at the entrance of the ballroom and guided us to our table where we were treated to a slap up 3 course meal where much fun and jokes were had before a few of the Motown legends attending sang for us until the early hours as we slow danced. We had performances by legends like Martha Reeves, Peabo Bryson, Deniece Williams and more!
Dancing up a storm after dinner to the live performers was Kanya, Brenda, Ricky and Bianca from Eastenders, Celena Honeyz, actress Preeya Kalidas, stylist Richard Shoyemi and more. What a surreal night at the ‘Michael Jackson; life of an icon’ premier and dinner. 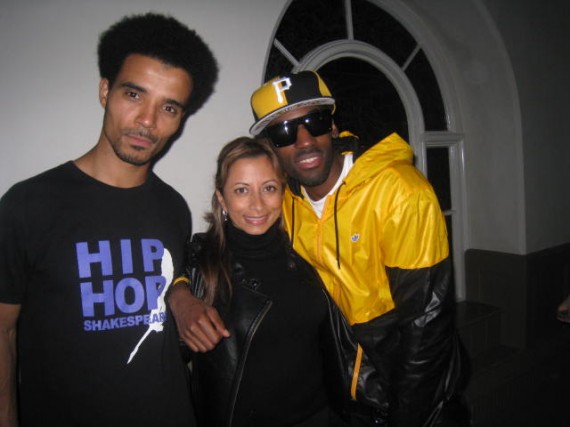 Next I went to church with Akala and Bashy. It was St Peters Church in Notting Hill where First Direct bank were holding a ‘’dialogue’’ festival in the church where fascinating acts like Pérez Hilton, Tim key, will self and many more were performing sets across a week. Akala’s Hip Hop Shakespeare Company were part of the line up one night so we went to check them out. Pre-show Akala invited us backstage to the dressing room where he was chilling out before he hit the stage by kicking around a football with a young fan. There were an abundance of red velvet cupcakes, which he asked us to help ourselves to. Stunningly I declined after seeing a photo of myself last week next to a ridiculously skinny person that made me look like a ridiculous obese person! The church venue had been transformed into a theatre setting and it felt right. It felt community like and important and the positive vibe testified to that fact. Akala introduced his band and vocalists who were of a very high standard especially a female rapper and singer, he explained to the audience that there were many stereotypes about hip-hop and that acknowledged poets and writers like Shakespeare weren’t far from a rappers skill set. He did this by quoting lines from rappers like Eminem, Jay Z, Wu Tang’s Inspectah Deck and Shakespeare and asking the audience to guess which line belonged to a rapper or Shakespeare. I was particularly impressed with an MC called Rowan ‘’Disraeli’’ Sawday who was very dynamic and animated and in my humble opinion has the potential to be huge. And then finally Akala introduced his friend and artist Bashy. Between them all they were by far the strongest act onstage that night. I paused to wonder at the juxtaposition of religion and music as I noted the branded logo being projected onto the churches beautifully painted frieze ceiling but then my mate told me not to worry as God would co-sign community events in his house as they were inclusive, made the church money and he has a sense of humour and needs to laugh and sing too!.