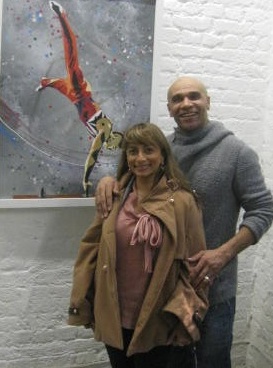 Its been a week full of top boys !
Drum and bass legend, actor and artist Goldie invited me down to view his Athleticizm” (adidas) Art Exhibition art exhibition of 13 paintings of TEAM GB Olympians that he was holding in the arch tunnels of South East London. The evening was choc-a-block full of tastemakers from the worlds of art, sport and music and Goldie excitedly showed us all his paintings of athletes like Jessica Ennis and tom Daley. Goldie used to be a very accomplished graffiti artist before he ventured into music so he’s always dabbling away at his art even now and the paintings were very impressive and reminded us all of the impending event that hits our shores next year! Goldie emphasised his respect for the athletes discipline ‘’ you look at people like Tom Daly and Jessica Ennis. You could literally pass them in the street if they weren’t as well known. You would think they’re literally quite superhuman these characters. The one thing that you have in common with them that I think that a lot a people don’t seem to see is the dedication they’ve had in doing what they love, they spend many years. You might see them coming off the high board at the Beijing Olympics and thinking it’s great. Did we see how many times he got that dive wrong? Did we see how many times he was there in the pool, in that pool time and time again?’’. Goldie summed up the amazing night by stating ‘’Street culture has come a long way and I think the way we look at graphics and the way that we look at art in general we know has changed and I wanted to have my take on it, my spin on what is only of my opinion, it might not be your cup of tea but it’s what I like and a lot of my young friends or people that are around who are into art and music that’s what they like, they like that kind of style’’. 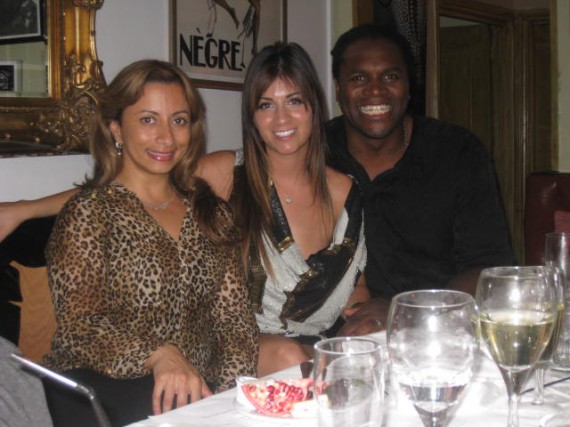 JASMINE WITH BOXER AND STRICTLY COME DANCING CONTESTANT AUDLEY HARRISON AND HIS WIFE RAYCHEL.
Next Olympic boxing champ and now strictly come dancing contestant Audley Harrison invited me to his 40th birthday dinner party at Cottons restaurant. Seated next to his American wifey Raychel and their adorable daughter, Audley hosted a very fun night for 35 of his nearest and dearest that included his dad, brother, cousins and lots of tough he-men boxer types. They all warned me I wouldn’t want to bump into them in an alley on a dark night if we vexed Audley! Originally they had booked the original Cottons restaurant in Camden but then had to move it to the new Cottons in Islington. Whilst the staff were polite and lovely, the food it has to be said wasn’t a touch on the Camden restaurant. In the Camden branch the curry goat is so tender it melts in your mouth-in Islington my plate was full of bones-no meat-so many bones that guests teased me with ‘’did you order curried bones and rice?’’ Not good. Will stick to the Camden branch moving forwards. The dinner party had Audley and his missus playing perfect hosts introducing all their guests to each other and entertaining us. Audley made a touching speech about all his achievements thus far and said he couldn’t imagine sharing this special moment with anyone else anywhere else, then proceeded to demand ‘’absolute smooth lump free custard’’ from the waitress to go alongside his apple pie! A memorable evening with lovely people, great conversation and much family love! 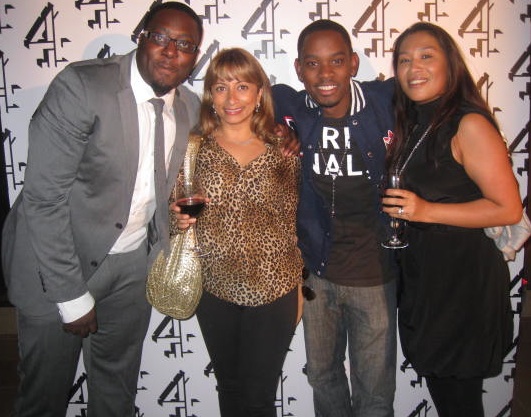 JASMINE WITH MC SWAY, ACTOR AML AMEEN and ADIDAS HEAD MAVEN PAOLA LUCKTUNG!
In recent years there have been major swings in areas of success for young British youth. The main winner for so long was making it as a music star, especially since #TEAMUK stars like Wiley, Chipmunk, Wretch32, and Tine staked their hold on the UK charts. Then came the new wave of young comedians spearheaded by Kojo. Next in line has been the new eruption of young actors and filmmakers led from the front by Noel Clarke. Noel and other film makers and actors like Ashley Walters and Aml Ameen have been working hard and steadily at their craft for many years now with noel having starred in Auf Wiedersehen, Pet and Dr Who as well as writing and directing his films Kidulthood and adulthood. Similarly Aml Ameen has starred in the bill, Kidulthood and is now a Hollywood star appearing in Harry’s law. Ashley Walters has had a career as a musician with so solid crew as well as numerous acting roles in Grange Hill, Get Rich or Die Trying, London’s Burning and now the Channel 4 4- part series Top Boy which had the urban world buzzing so hard last week that it was trending worldwide on twitter!
Ashley Walters, Kane ‘’Kano’’ Robinson and Channel 4 invited me to a red carpet TV launch event for the major new TV drama from the award-winning producer of the Last king of Scotland and writer Ronan Bennet-TOP BOY. Aside from Ashley and Kano the film also featured Scorcher, Sway and Giggs.
We arrived at the plush Mayfair Hotel to view episode 1 whilst it also aired on public TV, where a drinks reception over flowing with wine and apple martini’s was in full swing whilst excited fans were taking photos of the cast. Bashy rocked a bright orange Adidas jacket and dark shades on the red carpet, I nearly didn’t recognise rapper Sway as he reached out for a hug as he was in full sharp grey suit, white loafers and a trim! Singer Kel Le Roc looked as fierce as she ever did, Davinche in his bleach blonde Sisqo hair, J2K bantering away loudly, Aml was looking as well as ever having flown in from L.A with his lady friend. After an hour or so of drinks and tiny canapés going around we were invited to the basement private screening room where instead of introducing us to the film and requesting we turn off our phones we were asked to keep them on and add to the twitter conversation as everyone talked about the show live whilst it was going on both in our screening room and on real TV. It was interesting to read the comments live and unedited as celebs like Rio Ferdinand and more tweeted their approval at the show!
Many guests were left standing for the viewing so popular was the turn out, Bashy and singer Loickk Essien were seated directly in front of me and the Adidas celeb press team led by Paola Lucktung. Bashy had a silver tray of drinks delivered to him in his cinema seat, Loickk offered the Adidas team a drink ‘’even though you sent me the wrong size trousers!’’ LOL.
Once the show began there were cheers and whoops as we all recognised the cast, the viewing was rawkus and fun. Everyone agreed at the end that we would all make an appointment to view the next 3 nights before making our judgement of the series. I did hear many complaining that it was ‘’just another one of those dramas that glamorise gang life and hood mentality’’. On the other hand many were pleasantly impressed by the high production qualities. I thought it was representative of many real life stories (except the TV version didn’t seem to have any police?).
I also think broadcasters and film makers need to commission a variety of content. I agree so much of our content is extremely stereotypical. In America they have balanced representation of ethnic people, they can have African American drama like the wire and the Cosby Show. Here its all very one sided. Take the example of film company Revolver (they that brought us other deep titles like ‘’Anuvahood’’ and ‘’Shank) who this month have churned out yet another ‘’UK hood film’’ called Sket. ‘’Sket” is a term of abuse for a worthless woman, another word for slag. This is lazy and insults females and puts a very negative message out there to young people. I don’t want females in my scene described as Sket’s to the nation as if this is what we’re about. Also how many post Kidulthood dramas can there be? Revolver will keep exploiting our culture-and we will keep buying into it. They get rich. The community stays poor-financially and mentally. The vicious circle continues. Until all of us collectively take responsibility for our output nothing will change and we’ll all continue to blame each other. We need film makers that are brave enough to invest in it or a UK Spike Lee character that will stand up to the film companies that exploit our talented young people and culture, but whilst no-one is brave enough to do this-they continue to win and we wonder where its all going wrong!