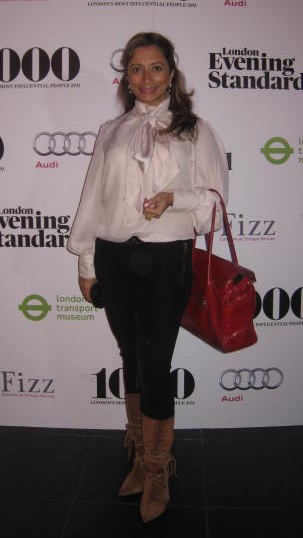 JASMINE AT THE ES 1000 CELEBRATION NIGHT!
The very posh Evening standard 1000 most influential gathering party at Covent Garden transport museum was a who’s who of London. The transport museum is a fascinating space that every Londoner should check out-its history of the capitals transport with real old skool buses and trains on display and a real gem in the centre of town. On arrival on the drizzly wet night, the red carpet was surrounded with heaving paparazzi and just inside A lister after A lister were having theirpics taken up against the evening standards branding board. Once we had navigated the museum and led to the main central stage space I spotted Jemima Khan, Boris Johnson, Ken Livingstone, Dragons Den panellists,
A very fancy food menu and champagne were distributed the whole night. There was atower of cupcakes and the room was like a James Bond party and the over powering scent of money and power were not to be sniffed at. Boris Johnson kept a wide berth from his old nemesis Ken Livingston, The former Mayor posed alongside Lib-Dem rival Brian Paddick. “Where’s Boris?” asked Mr Livingstone. “We want Boris to make it a threesome. We want a threesome with Boris.” cringe.com. Vivienne Westwood and Kids Company charity founder Camila Batmanghelidjh had an unspoken outfit competition to see who could be more eccentric. Pop star Holly Valance and her billionaire boy friend Nick Candy made a striking couple. My mates tried not to ogle male model David Gandy too hard. Brian Paddick, Jemima Khan, Riz Lateef, Kathy Lette, Henry Holland. BA head Willie Walsh Ian Duncan Smith and Toby Young were all chatting and laughing hard. It was good company to be in!

Next Tinie Tempah and his manager Dumi invited me to come and watch his gig at Wembley. The whole arena was packed out and I sat in wonder observing the crowd and how far we’d come since the days when a UK urban act couldn’t even get a gig at the jazz café let alone a few nights at Wembley to a sold out crowd!. The support were a class with Tinie’s mate Labrinth warming up alongside DJ Zane Lowe and DJ Nero who turned the whole rave pre-Tinie into a hot sweaty rave. a real jump up and down, to every beat including the one in your head , mosh pit of madness!. By the time Tinie came onstage they were amped up to hysteria and the show was magic! Fantastic visuals and graphics that were mesmerising alongside a simple but structured framed stage set that lit up in a variety of guises throughout kept us engaged. Tinie performed hit after hit alone and with his buddy Kelly Rowland and left the crowd overly hype and content as they left at the end of the night.

Like many parts of the country West London has its own gang and youth issues and the drama between Kilburn and Mozart Estates in that part of the city has been well documented. Not all the youth in these areas are into negative pastimes though and as proof there was a massive turn out at Ladbroke Groves Tabernacle Centre for The Avenues Show where all the young people from the club performed a variety of song, dance and spoken word sets for a very happy audience. The talent was of a brilliant standard and I was more than impressed! The youngsters raised £3000 in ticket sales and hopefully that money will go back into funding their club and regenerating their area!

Next I attended the JAMAICA HIGH COMMISSION’S CELEBRATION OF KINGSTON at the Jamaica High Commission in Kensington where there were presentations from key travel and tourism officials on howKingston will be supported on a world stage into 2012 for the Olympics in London. I know from my inside contacts that a certain part of London is going to be transformed into a mini Jamaica city where no doubt there will be much excitement! 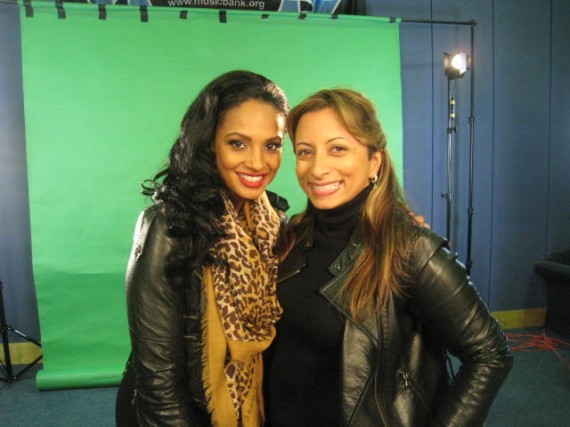 Alesha Dixon invited me to come and see her on set as she made her charity video for this years poppy appeal event in Central London. She was paying homage to Dame Vera Lynn with a modern more up-tempoversion of the war classic ‘’We’ll meet again’’. She looking drop dead gorgeous in a floor length slinky ball gown and dramatic make up. She also wished the LONDON360 TV show luck with our City Hall event (more on that event next week) that celebrated series 1 with the mayor, youth, reporters, press, celebs and more. Alesha spoke at the event and said ‘’ as soon as I heard London 360 involved London’s young people uncovering grass roots news stories, I wanted to get on board and support it. I’m part of a generation of Londoner’s that believes in positive stories about our capital and its communities.it can be difficult for young people in today’s climate and it is important to encourage and support them through mentoring, training and real industry experiences like those offered by media trust. It’s vital for young people and local communities to have a voice in mainstream media, to talk about the things that matter to them and showcase the great work they are doing in their communities. Earlier this year London 360 highlighted an issue i feel passionate about, female genital mutilation. It’s really important to raise the profile of issues like this and encourage debate in the wider community. Thanks to London 360 this feature aired on TV and online, as well as subsequently being picked up by BBC Radio London and in a national newspaper. It’s amazing that the young reporters have captured so many untold stories about our city over the past few months! London 360 has enormous potential and will continue to affect the capital with positive change’’. Then I had some good news for Alesha. Because of the success of LONDON360 the TV show is now being extended across the country so UK360 begins at the end of this month. As if that wasn’t enough a YOUNG PEOPLES QUESTION TIME is being planned for our screens next year too! All change for a positive impact between adults, youth and society!
Next Boris Johnson called us and said ‘’’this is a great celebration of talent, and shows how gifted and creative young Londoners from across the capital are. It is important for young people to have a chance to get together and debate, as well as hear from experienced professionals in the media industry as they start their own careers. I’m pleased to endorse the Media Trust’s work and wish them well’’.
With Alesha and every other major celeb nowadays paying serious attention to giving back and charitable issues to help society we are all #WINNING!