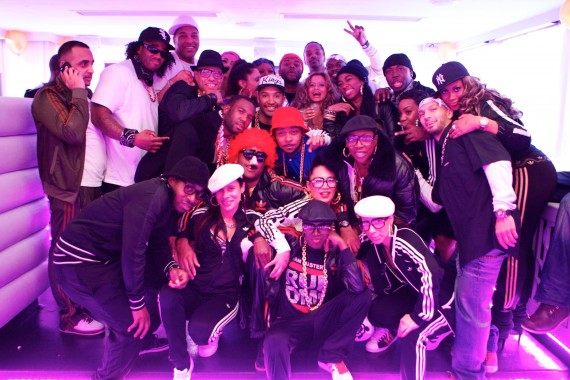 So this year my birthday party was nuts. My birthday is actually in January but I’ve never let that stop me having extra parties throughout the year. As it’s early in January and most people are away, skint, depressed or partied out, I always leave my party until a few weeks later. Hence many think my birthday is in February. This year a high profile pal of mine wanted to tour the UK with some comedy and we agreed I would delay my party to coincide with their dates. Long story short that didn’t happen but I then threw caution to the wind and settled on a May bank holiday for my party and yes it was still billed as my ‘’birthday’’. I’m like the queen darlings. I have 2 birthdays-this one was merely the public one lol. 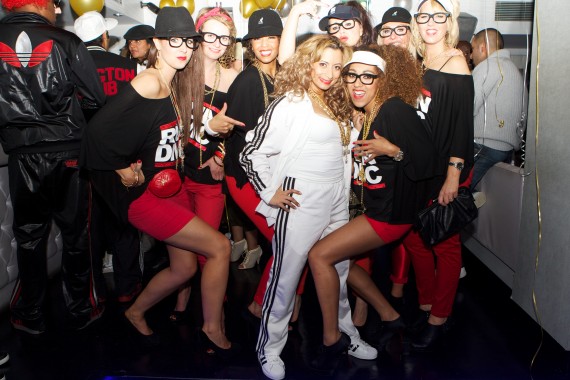 JASMINE WITH DANIELLE BROWN AND HER RUN DMC CREW
I like to work hard and play hard and this year decided that my party theme should excite the men cos usually they hate me for strange costume demands like ‘’Motown’’ which was last years theme. So this year the men were enthusiastic and came with their best Slick Rick, Eazy E, LL Cool J and RUN DMC looks whilst the girls, who initially struggled with the costume theme, came as various versions of Lil Kim, Nicki Minaj, JLo, TLC and more. 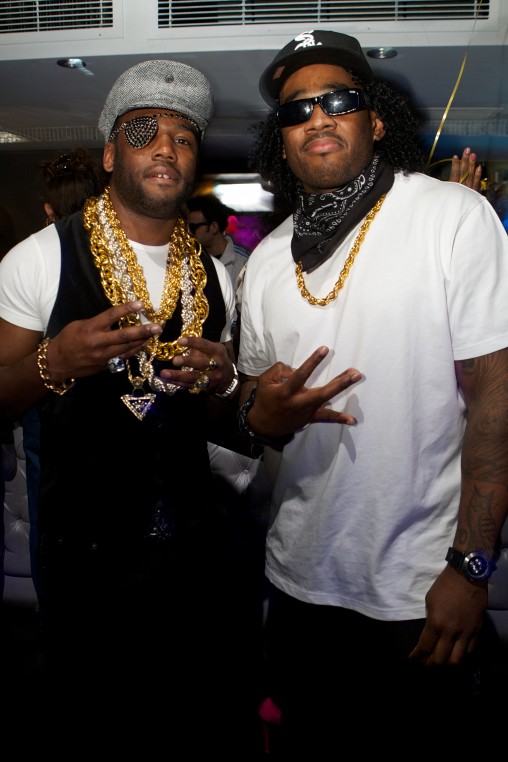 SLICK RICK AND EAZY E CAME TOO.
Subconsciously I think I wanted to prove a point by throwing a party in Mayfair in the West End and letting all my mates turn up in tracksuits, jeans and trainers just to spite the usual doormen politics of dress sense issues. The other part of me was also concerned that if the police saw droves of people heading into town wearing tracksuits they might predict a riot and shut us down lol!. 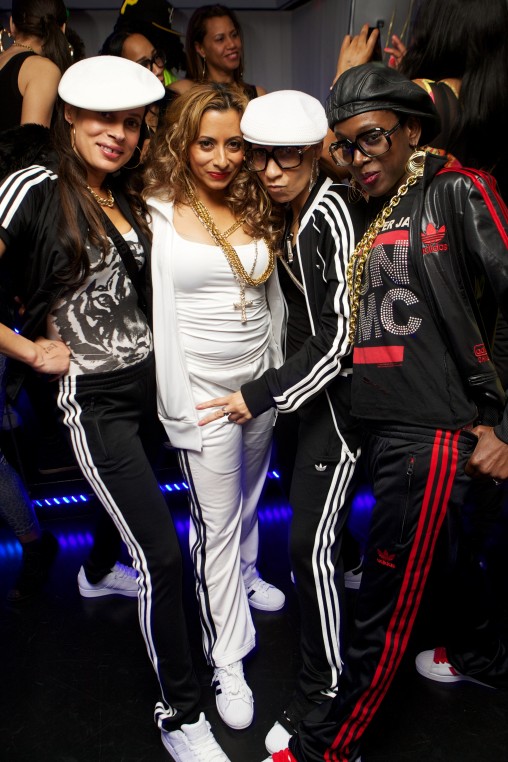 PR DONETTE JODIE DALMEDA (SONYBMG / VIRGIN UNITE) ,JASMINE,BBC’S JAY DAVIDSON, COOKIE CREW’S COOKIE.
I had really gone to town with my look and the day before had celeb tanner to the stars James Read (based at the Sanderson) to spray paint me brown). Next I popped into celeb hair salon ThreeV in Notting Hill Gate to have celeb stylists Julien and Melissa put a ton of hair extensions in my head to emulate the wild curly haired Puerto Rican chics from back in the day. next celeb facial Nuz Shugaa gave me one of her unique facials and a mani-pedi and finally I topped it off with my make up done by make up girl in demand in London town- miss Kristina Theordoris! 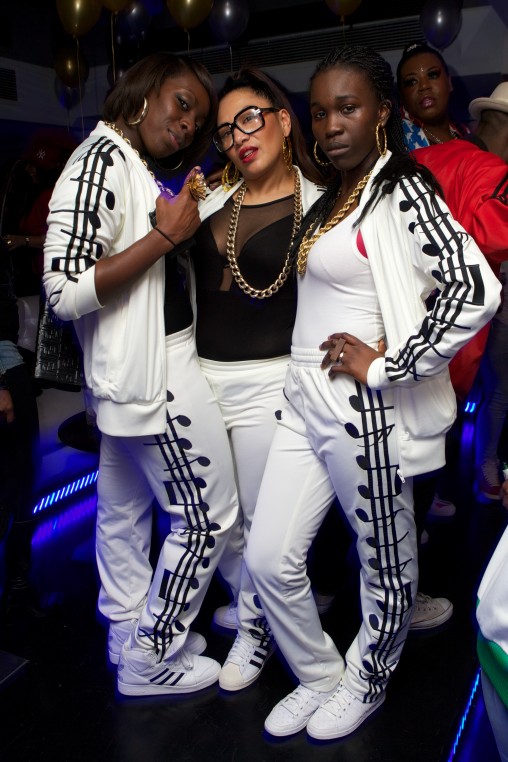 ADIDAS HQ FIRST LADIES AKUA, PAOLA AND AISHA.
Finally Adidas bigwig Paola Lucktung sent me off with Adidas lady Aisha Badmus to personalise an Adidas Jeremy Scott dress with bling for me. They also suggested a 2nd outfit, which we turned into really corny yes amazing his & her’s matching white firebird tracksuits.
I had a bit of a nightmare pre-party as one of the club barmen nicked my phone-not a good look just before your party starts. Then the club decided to charge such high prices for drinks that were ludicrous. So bad that a few LONDON360 TV crew hired a tuk tuk rickshaw, had it ride them to the local Weatherspoons, downed 5 shots each-and got the tuk tuk back to the party-all at a cost less than one round at the club. Oh dear. Sorry guys!
Furthermore the club then told us at the start of the night that their credit card machine didn’t work. So not only could most of us not purchase drinks we were pretty mad. But like a trooper I grit my teeth and partied on. 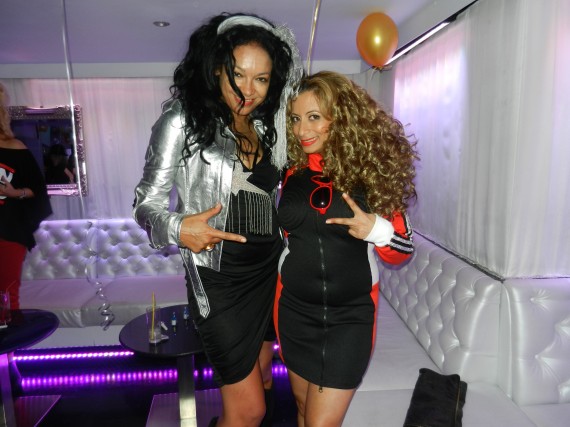 JASMINE WITH MOBO CEO KANYA KING
MOBO CEO Kanya King dropped a mini black dress and silver cropped jacket. Scary Spice’s sister and actress Danielle Brown and her girls crew came as female RUN DMC’s with bright red pants and Chrissy Lou shoes-too fly- and looked like they were going to break out into a full out routine. 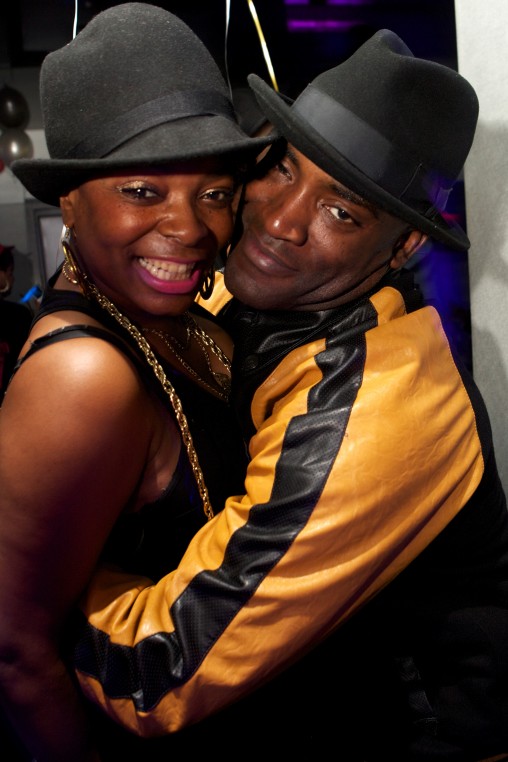 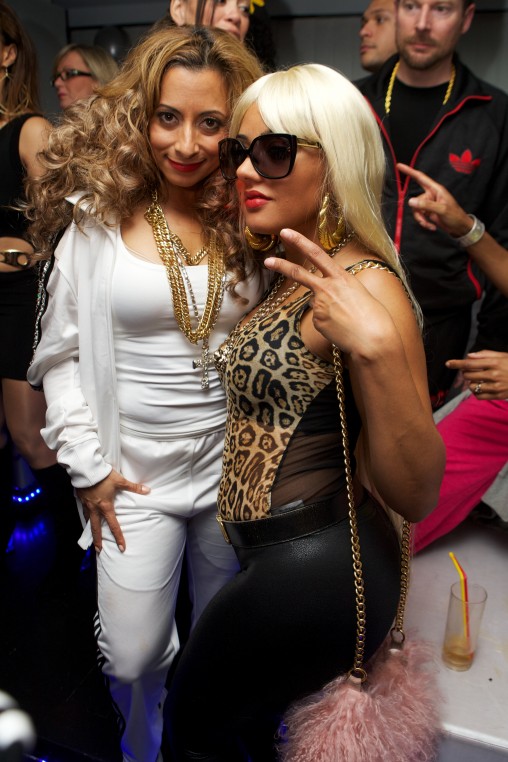 JASMINE WITH PRINCESS NYAH AKA LIL KIM!
Stylist to the stars Richard Shoyemi came as the ‘’American dream’’ in his stars and stripes look. Warner Music’s Taponeswa dropped a gangsta boss lady look but soon had her heels off, as the dancing got too wild.
There were a few Vanilla Ice’s and Marky Marks- sorry white dudes-you coulda come as Eminem but I guess he doesn’t really have a style of any sort. Oh well. **Shrugs shoulders**
My old music partner in rhyme SonyBMG’s Jennifer Mills wore her authentic bad boy jacket from the original bad boy days. Former head of SonyBMG international and marketing Mervyn Lyn took it all in from his observation spot and praised Richie P’s set. 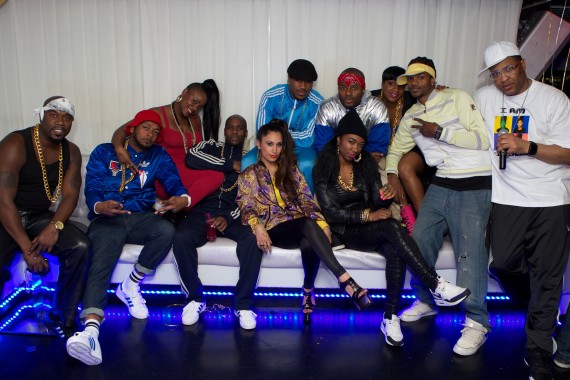 THE #TEAMUK COOL KIDS
Choreographer / dancer Royston and Duane came in old b boy sweats whilst grime goddess Princess Nyah came as Lil Kim in a long blonde wig and had men drooling over her all night as usual.
Comedienne Gina Yashere was hilarious as she leapt into the front of every picture being taken. Who else could have captured the night but the UK’s best-known photographer for music- mister Paul H.
The triple threat ladies Adidas crew (Paola, Aisha and Akua) brought the room to a stand still as they entered in their white musical note trackies and then we had the room roaring again as I stepped out of my 1st look (a fierce Jeremy scott for adidas dress with diamond sleeves) into my all white 2nd trackie (beautifully embellished by the hand and lock team that Adidas use). 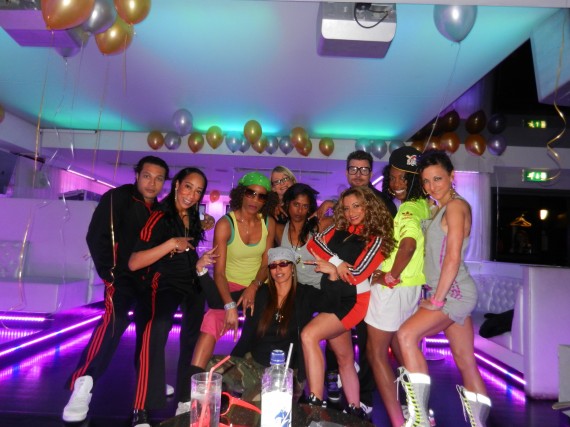 ME AND SOME OF MY GIRLS IN MY OUTFIT NUMBER 1-JEREMY SCOTT FOR ADIDAS BLING SLEEVE DRESS.
Even though the party wasn’t formally an Adidas event by the time all the guests arrived you could’ve shot an Adidas ad in there. Everyone had pulled out their oldest most classic 3 stripe looks and the venue looked amazing! The Adidas team even had huge tall cut out RUN DMC images for guests to stick their heads through. Like the ones on Brighton pier but more classic lol! 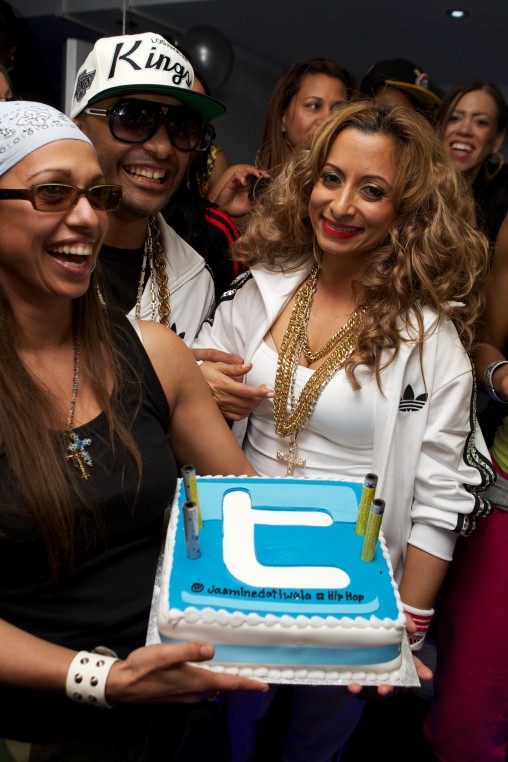 ME AND MY CAKE-TWITTER-COS APPARENTLY I’M ADDICTED!@
My partner had warned me that my cake would be a surprise. I assumed this meant he’s dug up some horrific old photo via my girl friends to have put on the cake but I was wrong. In his wrath at my constant addiction to twitter he put the thing that I apparently love most on my cake- the twitter logo! Surprised? I was!
DJ’s on the night were my big brother and former Rampage sound system member Richie P who flung down the best set from the 80’s and 90’s including Onyx, Lost Boyz and a crazy aerobic jungle set which had the club jumping and sweating so badly we had to have a slow session in the first 23 hours to get our breath back. 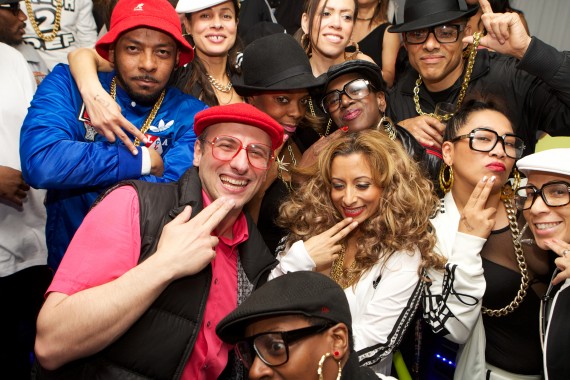 JASMINE AND FRIENDS.
Next up was DJ Kayper. Kayper is tinier than me. A pretty, slight Asian girl that can scratch, mix and drop a hot track like certain video chics drop the line ‘’I’m a model’’. She is fascinating to watch…that is if you could have seen her. The clubs DJ system isn’t really very well thought out for a hip-hop vibe so you can barely see a 6 foot man behind the decks let alone a 5 foot female so I kinda defeated the purposed there. But hey you live and you learn. 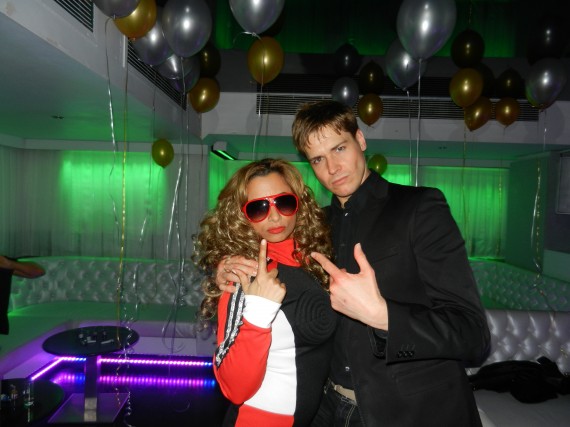 JASMINE WITH CAPITALFM’S ENTERTAINMENT HOST KEVIN HUGHES.
Immediately after Kaypers set girl group Rogue surprised me with an old skool rendition of Salt & Pepa’s Push It before launching into their own single ‘’Girls Anthem’’.
Finally the big man himself DJ Richie F- son of the legendary Mike Sweeny from RJS sound system took the decks and properly smashed it up. You have club dj’s, you have party dj’s and then you have a dj that just gets with the crowd to work them up into a frenzy the likes you’ve not seen since the Bad Boy party days. Richie. Tore. The. Spot. Down. With nuff call and response tracks like Lauryn Hill’s Lost Ones and Puffy and Mase hits, many party guests including me had lost our voices the following day. it was a night full of great vibes, non-stop dancing and outfits that had to be seen to be believed!
There goes another ode to hip-hop-the culture that nurtured and made me what I am today-! See you again same time next year!