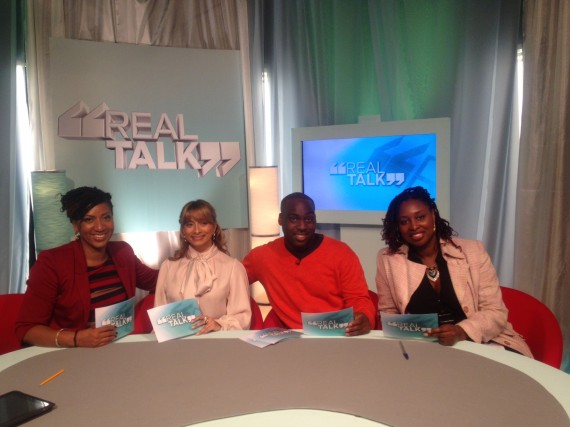 JASMINE JOINS HOST TRISH ADUDU ON THE REAL TALK DEBATE SHOW ON OHTV WITH BOE THE COMEDIAN AND MP DAWN BUTLER.
What a week. Never let it be said that I don’t live up to my own work ethos of work hard, play hard!
This past few days have seen me attend East London’s Streetfest where Wookie, Radi Dadi, Rattus Rattus (Urban Nerds), Knicker Bocker Corey (Urban Nerds),Spectrum City, Jon Burgerman, Project G, Stylinquents and more were doing their thing.
The same night I had my annual theme party!-more on that next week!
The following day all roads led to dance and spoken word impresario Jonzi D’s annual Breakin Convention jam at Sadlers Wells Theatre, the next night was the One World Media Awards and frankly my dears I am now pooped!
I also managed to fit in a night at a screening of the new Noel Clarke film Fast Girls and another screening for the Price of Kings series which is fascinating and a must see for all you folks that want to be leaders. 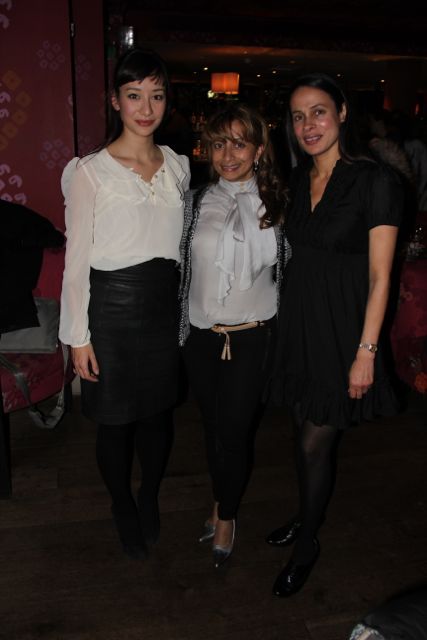 JASMINE WITH JOANNA-(PRICE OF KINGS PRODUCER) AND JODIE (PR)
The ‘Price of kings: Shimon Peres’ is a fascinating documentary, which captures the human side of what it takes to be a leader.
The first film was on Yasser Arafat and the third will be CostaRicanpresident Oscar Arias. These are all intimate portraits that reveal both the political and personal sacrifices made by leaders like President Peres and the impact on them and their families. The beautiful thing is you don’t need to be a history boffin to enjoy this is series (there are 12 leaders in theprice of Kings series) as it has a range of exclusive, insightful interviews with those that were there when these historical events took place and the man himself. Its good British documentary making- informative, thought provoking, beautifully shot, and emotional. I went with my femalepower players Jay Davidson (BBC marketing), Cookie (Cookie Crew rap collective), Terri Walker (singer song writer) to go support our girl JodieDalmeda who is running the PR on the series of films. 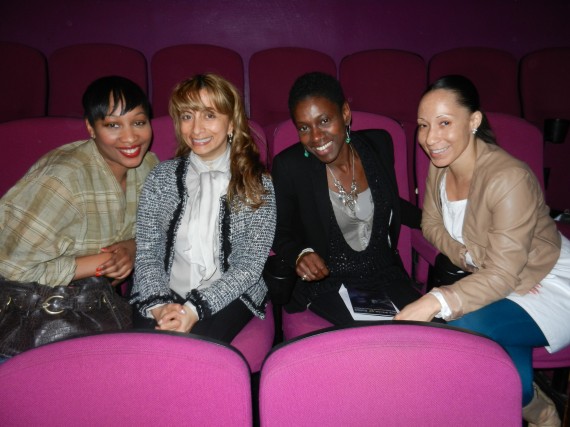 JASMINE WITH TERRI, JAY AND COOKIE AT THE PRICE OF KINGS PREMIERE.
Later that night the cast and crew went to the Haymarket Hotel for post-premier cocktails where a fewviolet martini’s went down a treat as I congratulated film maker Joanna Natasegara,(Producer/Director) on the inspirational work from which I would be noting and remembering for life some of the aspirational quotes within the movie. I highly recommend it to anyone interested in gaining a deeper understanding of leadership. www.priceofkings.com
Next I joined a panel that included Boe the comedian and former MP Dawn Butler on the REAL TALK show (OHTV-SKY 199) hosted by the lovely Trisha Adudu. We debated the Olympics, young peoples access to negativity on the internet, whether London needs a black mayor, natural hair VS fake hair and whether we’d prefer to be beautiful and hated or ugly and loved. You know I could rant for hours about all of these subjects so it was hell for me to keep it short and sweet but we managed to get to the end without scratching each other’s eyes out. The big thing that came out of that was that both myself and Dawn Butler are considering running for mayor in the future LOL. 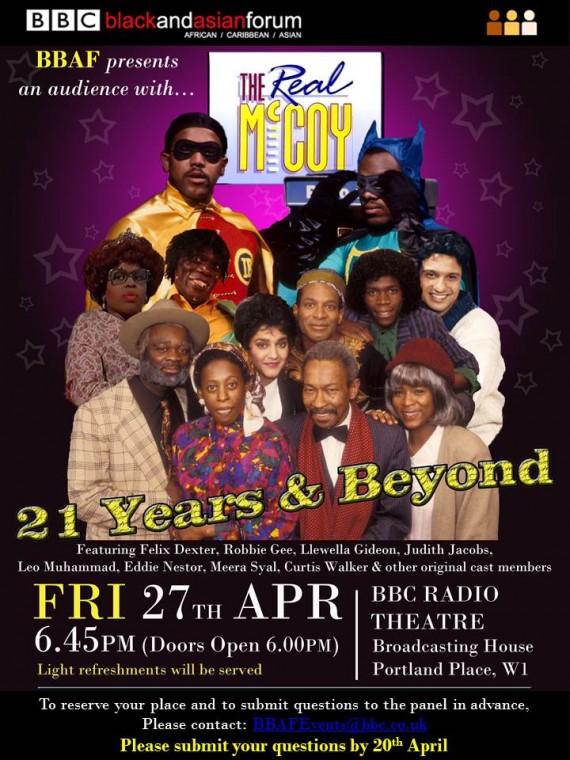 Finally we all got our comedy loving side together to attend a celebration acknowledging 21 years since the BBC TV show the REAL MCKOY began.
The invite promised an audience with all the shows original cast, producers and now black entertainment scene legends! it was a full nice turn out at the new BBC 8million cost building in town in their lush all bells and whistles theatre screening room.
As we entered I note it was like an old skool reunion with folks In the house who included Angie Le Mar, Kojo, Eddie Kadi, Eddie Nestor, police bigwig Leroy Logan, comedian Slim, DJ Daddy Ernie and many more. Our hosts Brenda Emmanus and Eddie Nestor had to deal with a very lively crowd who knew moreabout the legendary show than one of the BBC bigwigs who got all his facts about where and how the show started wrong-oops-fire the staffer that briefed that man! (clanger numero uno).The main man that runs BBC TV -our big man- mister Pat Younge came and did a welcome introduction where he urged the audience to e mail him TV show ideas. Straight away amongst the attendee’s was a discontented murmur as a few folks heckled ”we have, with no response”.Awkward moment number 2. And readers, to be perfectly frank from there on in whilst it was a brilliant night with great memories about the Real McCoy show with fascinating anecdotes from the cast and backstage crew , there were a lot of awkward moments one after another as cast and audience berated the BBC about not supporting black programming and not being up to date with the modern British cultural world. It was great to see the main cast including actors Felix Dexter, Meerya Syal, Judith Jacobs, Curtis Walker, Leo Chester (now Mohamed) and the producers all bantering with each other about their memories and current journeys. However, Ima keep it real. It was a BIG night and funny as hell. But the BBC bashing was dominant. The general feeling was that “Nothing in TV has really changed for black talent and black TV audiences in 20 years on the BBC”. I feel like I came to a party and we were trashing the hosts house. Someone suggested that if all the ethnic influencers and talent in this room united to form a company it could be huge. I agreed but know that only 1% of us sitting in that room would actually stick to our commitment in making it work whilst the other 99% would be all talking hecklers. I’d leave my full time paid job daily at 6pm to work on my own company for no money for months if others joined me. But who is really going to believe in themselves enough to do that? ….Luckily Angie Le Mar showed an exclusive trailer of her new TV show “The Ryan sisters” about 3 black sisters which looked brilliant! 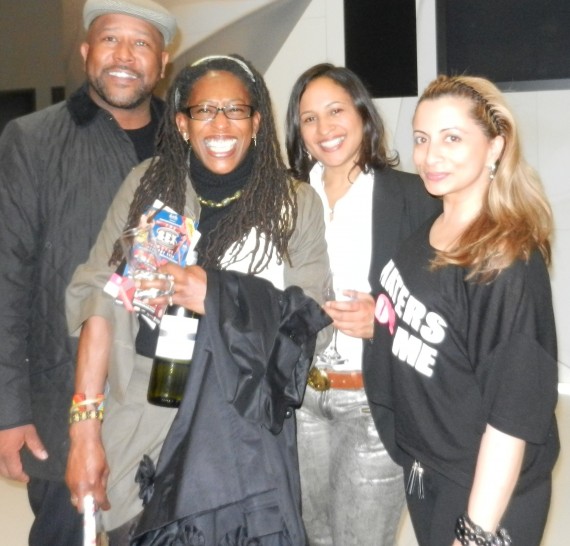 JASMINE WITH CURTIS WALKER, JUDITH JACOBS AND BBC’S MICHELLE MATHERSON.
Part 2 of the evening showcased new faces with new heat coming like comedian/ radio host Kojo, comedian /radio host Eddie Kadi, Comedy promoting legend John Summit and comedienne/actress/writer Angie Le Mar all talking about doing it their way after being rejected by various mainstream broadcasters and establishments over the years. Kojo has made his own DVD from his sell out show at Hackney Empire. Eddie has sold out the 02!. Angie has had her work seen on stage, heard on radio and televised. All without mainstream corporate help.
I have to say from the internal staff point of view I have a lot of admiration for development and talent executive Michelle Matherson who has been at the broadcaster for years and must have seen the in’s and out’s with working with a corporation that does have to play it very safe and the internal politics must be horrible to deal with day in and day out. (I bet she couldtell some stories!). She must have to see a lot in her drive to bring in diverse talent.
In May the BBC Comedy teams/TV Collective and more are working with new comedy talent to find the stars of the future…….get in touch with the tv collective online. Like voting-if you don’t act you can’t change anything. If you’re not in the game you can’t even be a player let alone be a winner!!
See http://thetvcollective.org