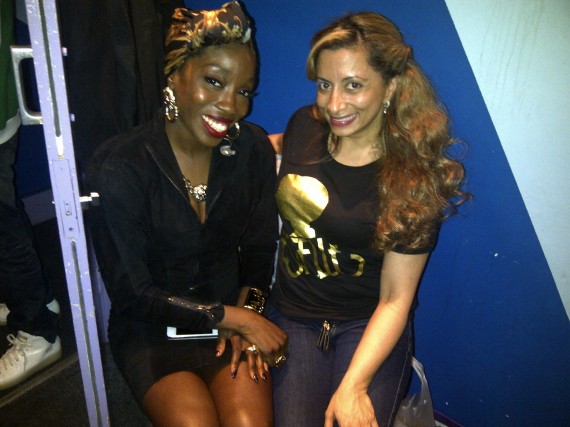 JASMINE WITH ESTELLE.
There was much excitement in the air as West Londoner Estelle stopped through London on her European tour and did a couple of nights at the Jazz Café. Opening the night for her was mutual friend/songwriter/singer Roses Gabor who hit the stage with her feisty no nonsense attitude and told the audience from the start that they better get involved as she wasn’t suffering any fools. They immediately obeyed and as she sang track after track of her infectious quite grimy dub step tracks with a soulful sound and they sang alongside her, jumping and clapping-it was like a mini festival up in Camden town!. 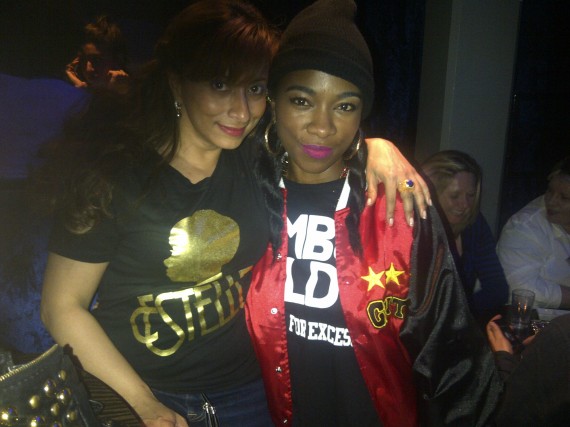 JASMINE WITH ROSES!
Roses had the crowd sweaty and hot-(just the way Estelle likes em)-before jumping offstage to take a bevvy of photos with fans.

Next up-the main girl of the night-miss Estelle Swaray slinked down the legendary venues staircase and onstage wearing her obligatory high designer heels, a pencil skirt and low cleavage-teasing top, with her hair in an old skool jazz singer style turban, a la Nina Simone. Her fans were ridiculously excited and the whops and cheers were strong and consistent throughout her set, which contained many of her hits from ‘’no substitute love’’ and ‘’break my heart’’. Her remix version of the D’Banj hit ‘‘International’’ had a carnival spirit flowing in the venue with everyone shocking out’’.
It was ‘’thank you’’ that had the whole packed housed as silent as a church though as she sang the song with haunting passion, immense emotion and a powerful vocal strength not seen often. Her voice sounded strong. And dangerous. it made me as her mate want to cuss out the man that had brought forth such pain and heartbreak into her life. On the other hand I celebrated the fact that she made some financial gain by writing a great song that many of her fans could relate to and use to lessen their pain.
At the end she explained to the audience that for the past 4 years she had had to sing ‘’American boy’’ nearly everyday of her life. She laughed and quipped she wasn’t complaining as before that the song had been her first hit ‘’1980’’. The audience were more than happy to help her sing along to every word of the now ridiculously well known global classic. 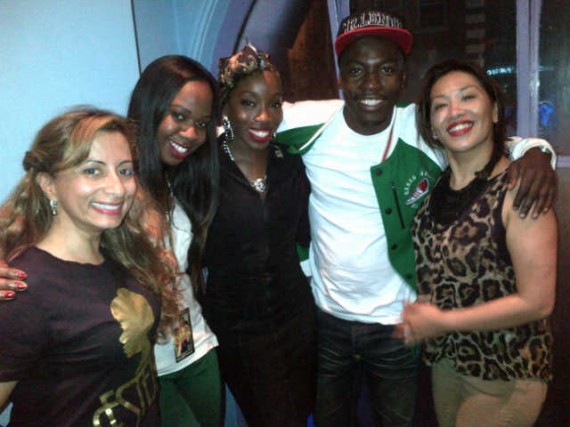 JASMINE WITH PR GURU VANESSA AMADI, ESTELLE, EDDIE KADI AND ADIDAS HEAD HONCHO PAOLA LUCKTUNG!.
At one point in the night Stell decided to shout out a few of her friends in the audience including myself, Paola, DJ Big Ted, her mate Ahmed and best friend PR goddess Vanessa Amadi…. she said (and clearly this proves she might be able to sing but is crap at maths) ‘’ I want to shout out some of my friends that have been rolling with me for 15 years and more’’. Well how in the world is that possible when some of us aren’t even that old! I am eternally 12!
Backstage afterwards myself and Adidas head honcho Paola Lucktung went to pay our respects as did DJ Big Ted, comedian Eddie Kadi and many of her friends. I was impressed with how svelte Estelle’s waist has become- that’s that healthy eating American ish right there. I will next be seeing her in Jamaica in a few weeks where no doubt our bikinis will be in full effect so I’m off to buy lots of fresh salad ingredients now so as not to embarrass myself.

This week I also caught up with Cassius Henry –one of the current finalists in the BBC’S The voice who was being put through his paces something hard-core on the outskirts of London. I caught up with him just as he had finished dance rehearsals at the end of a crazy week rehearsing with his mentor Jessie J. He revealed that they were just finishing up rehearsing a group song together, which he was really excited about. He also said his week had been going amazingly with hard work and hard play with the whole of his group going off bowling as a way to relax and as a team bonding exercise.
Cassius excitedly told me ‘’Jessie J told me a lot about her own experiences and advised me to stop being tense and be myself and bring the real me out onstage, she keeps telling me ‘’Cassius let go’’.
But all the hard graft, constant live TV and being under the spotlight have started taking a toll on his vocals. He admitted ‘’I’ve Had problems with my voice recently with laryngitis, I was worried I was losing my vocal strength- but Jessie has encouraged me to stay mentally positive’’.
Many will know that Cassius lost his brother years ago to heart failure which threw him off his path for a while so its very admirable that he is now back on track and picking up his dream where he left off. He’s obviously had a few breaks in the past but now he’s come to close unfinished business. His brother now gives him strength, ‘‘before I hit the stage I carry around a key ring with a photo of my lil brother cos this is all in memory of him and he’ll get me through it. I have a strong team, they tell me all the time ‘you’ve got to be on your a game’.
Having hosted a live national huge show in my own past I know how terrifying live TV is. You get one shot to get it right. Under the hot lights, buzzing studio and tense production crew you either bring your A game or step aside.
Cassius agreed ‘’live before a show I can’t relax, I’m like a panther pacing around’’
Cassius praises the lord for his mentor Jessie’s guidance ‘’Jessie controls all our set and ideas and I really like her ideas a lot-her imaginations really good. She’s like an A&R person. She gets to know us as people and helps keep us real’’’.
Cassius hopes that we are all behind him as he tells me ‘’because even though I had a tiny taste at fame I’m now ready to take the baton and run with it fast’’. Alas Cassius didnt make the finals-but i have no doubt this isnt the last we’ll hear from him….after all, remember Sony once dropped both 50 Cent and Alicia Keys!