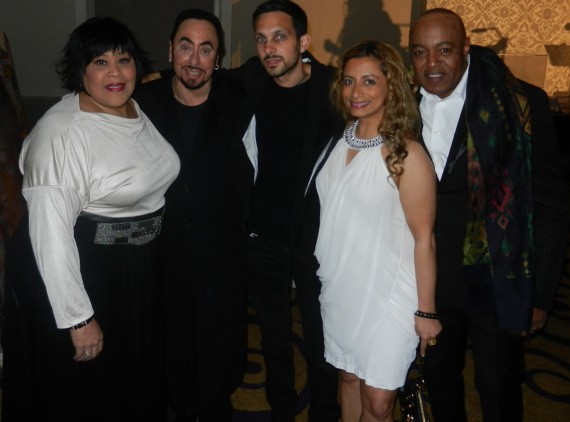 MARTHA WASH, DAVID GEST, MAGICIAN DYNAMO , JASMINE and PEABO BRYSON.
David Gest’s annual birthday parties are now legendary. An American concert promoter and media personality, perhaps best known for his turbulent marriage to Liza Minnelli, his friendship with The Jackson 5 and appearance on reality television show I’m a Celebrity… Get Me Out Of Here!. 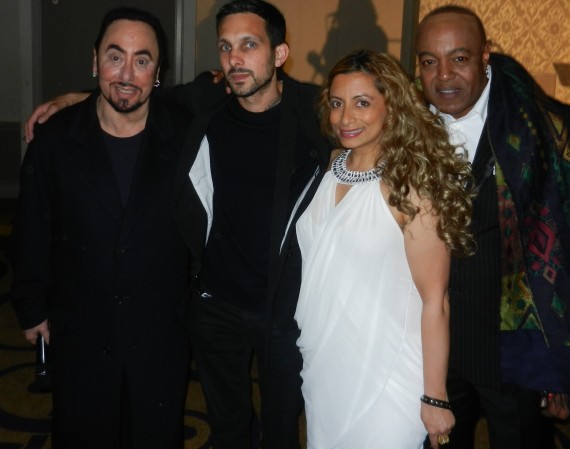 DAVID GEST, MAGICIAN DYNAMO, JASMINE and PEABO BRYSON.
David was nearly 60 this past month and parties and lives life as if he’s still a 20 year old! It’s fascinating to watch him as he hosts an event, totally in the thick of it with his mate and organiser Imad Handi, calm and friendly to all his guests in attendance. He really is one of the last greats alongside other showbiz legends like Benny Medina and Oprah.
This year David threw a joint birthday party alongside his friend, Eastenders actress Patsy Palmer (who turned 40), at the Grand Connaught Rooms in the West End. It was dubbed their joint ‘Music & magic’ birthday celebration to help raise thousands of pounds for ‘me&dee charity’ which included performances by 12 soul music legends and magician Dynamo.
A host of their celebrity friends attended on the night and everywhere you looked were household names.

JASMINE WITH EASTENDER’S ACTOR CHUCKY VENN.
A couple of tables at the front sat practically every Eastenders cast member I can think of. Kim Fox (Tameka Empsom) was hilarious as she ran in as late as I was just in time for dinner. Ray Dixon (chucky Venn) was there with his gorgeous lady Zoë-they were celebrating their first night out together since the birth of their new baby-congrats guys! . Ian (Adam Woodyatt ) was with his wifey and looked so happy and stress free I nearly didn’t recognise him! Denise (Diane Parish) looked very sophisticated in her frock and they were easily the most raucous, fun, sing a long tables in the house! Patsy palmer looked gorgeous and a far cry from her shabby grubby look on screen. She resembled a princess in her long fitted ball gown and hair in long flowing waves. 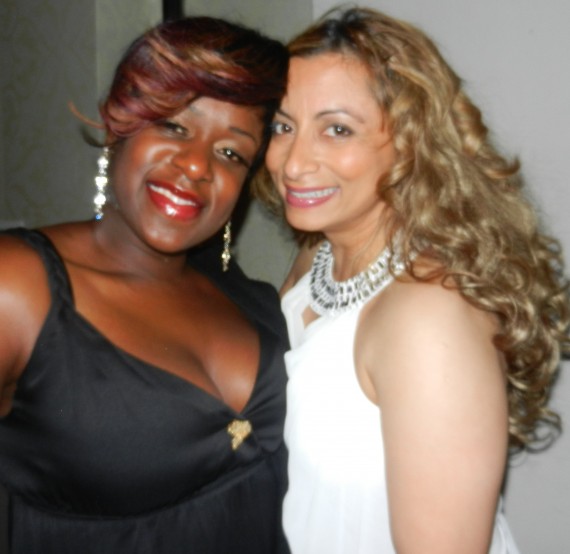 EASTENDER’S ACTRESS TAMEKA EMPSOM AND JASMINE.
Vanessa Feltz was there with her TV host beau Ben-they were dancing up a storm. Vanessa looked lovely in a gold fitted dress and even kicked her shoes off to get her 2-step on. Later in the eving she won the raffle too!
Magician Dynamo impressed the Eastenders cast and all the other celebs with his usual spooky magic tricks. He’d also not seen his girl friend for a few days and so both were very loved up during the evening- aw bless!
Loose women’s Carol McGiffin had the young lads with a flava for a MILF heads turning all night. I myself couldn’t stop staring at singer Candi Staton- so gorgeous and pretty at the grand old age of 72 still looked stunning-I can only imagine how amazing she looked in her youth!
The evening began with a cocktail reception (which my late ass missed). Next was a sumptuous 3 course meal which was so delicious guests at my table were sneaking in extra desserts!
Next came the celebrity auction where amongst other things that were auctioned included Lady Gaga’s hot pants, I looked around and tried to clock all the potential pop perv’s in the house lol. Next up was a signed letter and Bodyguard disc by Whitney Houston. There was a lot of excitement as Michael Jacksons contract for a live event went for a grand. A grand!? I know! Blasphemy! I wish I were loaded. I would’ve paid a lot more!
Meanwhile, my favourite performer of the night was Peabo Bryson (‘A Whole New World (Aladdin’s Theme)’ & ‘Beauty & The Beast’), peabo can really SANNNNG! His vocals were so strong! How can the elders singing strength be as strong as ever whilst current day stars all complain about weak voices etc? 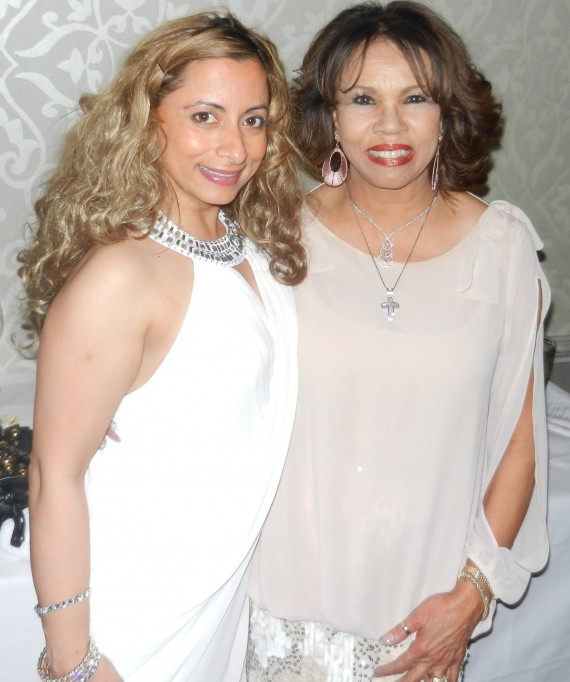 JASMINE WITH THE GORGEOUS CANDI STATON.
The stunning Candi Staton sashayed as sexily as ever with her sweet outfit onstage to sing You Got The Love’ & ‘Young Hearts Run Free’.
Billy Paul sang one of my favourite classics ever- ‘Me & Mrs Jones’, and then there was much fanfare for Martha Reeves & The Vandellas (‘Dancing In The Streets’ & ‘Nowhere To Run’), which had the whole crowd sweating and jumping.
Martha Wash of the Weather Girls (‘Gonna Make You Sweat (Everybody Dance Now)’ turned the ballroom into an Ibiza style rave as she belted out her classics with the crowds fists pumping the air. 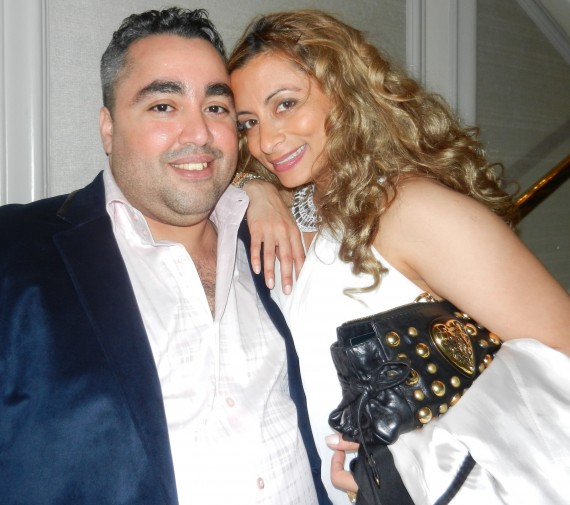 DAVID GEST’S BEST MATE/ MAN ABOUT TOWN-IMAD HANDI
Later we were also treated to more motown legends/ Davids mates (who do this for him all cos they love and appreciate his presence in their careers and lives for free!) ….Kim Weston (‘It Takes Two’, ‘Take Me In Your Arms (Rock Me a Little While)’ & Helpless), The Flirtations (‘Nothing But A Heartache’), Dorothy Moore (‘Misty Blue’ & ‘I Believe You’), Brenda Holloway (‘Every Little Bit Hurts’, ‘You’ve Made Me So Very Happy’ & ‘When I’ Gone’), Eddie Holman (‘Hey There Lonely Girl’). Sheila Ferguson (‘When Will I See You Again’, ‘Year Of Decision’ & ‘Dirty Ol’ Man’) and G.C. Cameron, former lead singer of The Spinners (‘It’s A Shame’ & ‘It’s So Hard To Say Goodbye To Yesterday’). The musical side of the night was complete with a 14-piece band performing live with the soul legends.
According to Gest: “At this stage in life it’s not so much about celebrating a birthday as getting together with great friends and helping a good cause. Patsy and I have been friends for years and we thought if we could help put a smile on the faces of some people who are less fortunate than us that makes this whole evening worthwhile.”
And that my friends is my mantra-the more you give the more you shall receive!