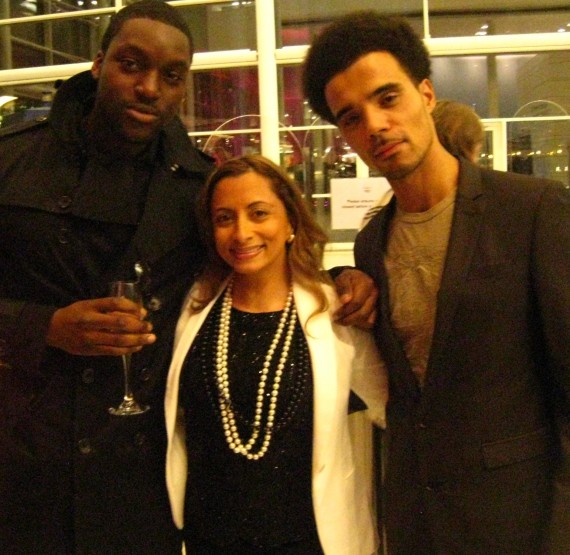 CDN AWARD NOMINEE FILM MAKER YEMI BAMIRO WITH JASMINE AND MUSIC ARTIST AKALA
The great and the good from the TV world all upped sticks and made their way to Manchester this past week for the annual CDN TV (CREATIVE DIVERSITY AWARDS) AWARDS.
I found myself on a train with one of my MEDIA TRUST DIRECTORS as well as SKY TV’S bigwig lady (managing director-entertainment and news) Sophie Turner Lang speeding to the BBC’s new northern home in Manchester called media city. Media city is a massive small town like development built in Salford on the quays so very pretty location-even though the wet rain and torrential winds didn’t greet us with warmth.

On arrival at the event we were greeted by trays of wine and champagne and a canapé reception where I caught up with music artist Akala-who was presenting an award and also nominated for 2 awards, ITN news reader Charlene White, former radio 1 producer for Trevor Nelson/ current BBC radio producer-Devon Daley, TV producer Yemi Bamiro-nominated for his TV show on channel 4-life of rhyme starring Akala and many more.
Former channel 4 head of diversity and mayoral candidate Oona King was dressed more casually than ever in lilac pants and shirt, the BBC big wig Pat Younge was looking well, coronation streets Shobna Gulati (Sunitta) looking very foxy in a tight pencil skirt and sequinned top that showed off her full cleavage with killer designer heels and a long flowing high ponytail, a few Hollyoaks presenters, and other TV power players.
Tameka Epsom from Eastenders hosted the night with Cherlee Houston. Both had a few autocue problems. The script that was written was quite wordy and long winded-not the best set up for a comedienne actress but she did her best.
Director of the BBC Mark Thompson did a great intro where he mentioned that BBC’s 3 new main aims include wanting to represent young people better and more fairly. From there it was award after award. Jimmy Akingbola and Ellen Thomas onstage-presented Best Drama Award- winner to the BBC show Luther which stars my friend and yours-the delectable Idris Elba. Chief Exec from Channel 4 David Abraham presented TV company of the year (for diversity behind and in front of screen) to Endemol who make reality shows like Big Brother and Survivor! Coronation Street’s Shobna Gulati presented best comedy and entertainment programme award to Phoneshop! The Diversity Innovation Award went to Battlefront! Best News Award went to the BBC Journalism Trainee Scheme.
Best Factual Programme winner was the amazing series Panorama-undercover care-the abuse exposed. All in all a great night that really showed diversity is in a good place with more of a focus on it than ever before. An amazing man called Clive Jones CBE who founded the CDN spoke at the end when he was awarded the Fellowship Award and said that when he was heading up many mainstream broadcasters like ITV back in the day he was astonished that with the UK’s diverse population that they weren’t represented fairly or equally on TV. He had his team add a black actor to coronation St years ago and sat back in his chair to watch the great moment and then held his head in his hands as he noted the black actor was portraying a thief that had broken into Emily Bishops store!. Clive added facts that made the audience sit up and note that if you have an African or Asian surname you will have to send at least 20 more CV’s out to jobs to even be considered for an interview. That Chinese boys perform better than Caucasian boys but still get paid 20% less, by 2051 the black and ethnic minority population in the UK will be 20million-so 30% of the TV audience will be ethnic-isn’t it time to start investing in our diverse cultures now? food for thought for all media makers. 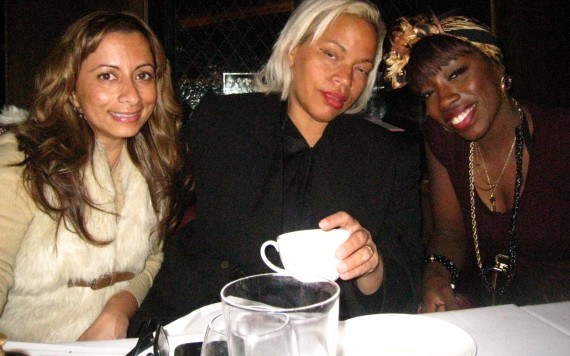 JASMINE WITH INTERNATIONAL STYLIST TO THE STARS-KAREN BINNS AND INTERNATIONAL MUSIC STAR-ESTELLE!
I ended the week by having dinner with Estelle who was back in her hometown of London on some promotion before heading out to Asia for some promotion. I took her and a few friends to the IVY CLUB- next door to the infamous IVY RESTAURANT but even more exclusive as it’s not for the public but members only. We had a great evening reminiscing and catching up over Bellini’s.
Ending on a great note- YOUNG PEOPLES QUESTION TIME has been given the green light for BBC3-so finally our youth will have their thoughts, hopes, frustrations and voices heard. The greater population will be able to see just what the young are going through and hopefully a greater connection between society will bring forth a lil more harmony- whoop whoop!