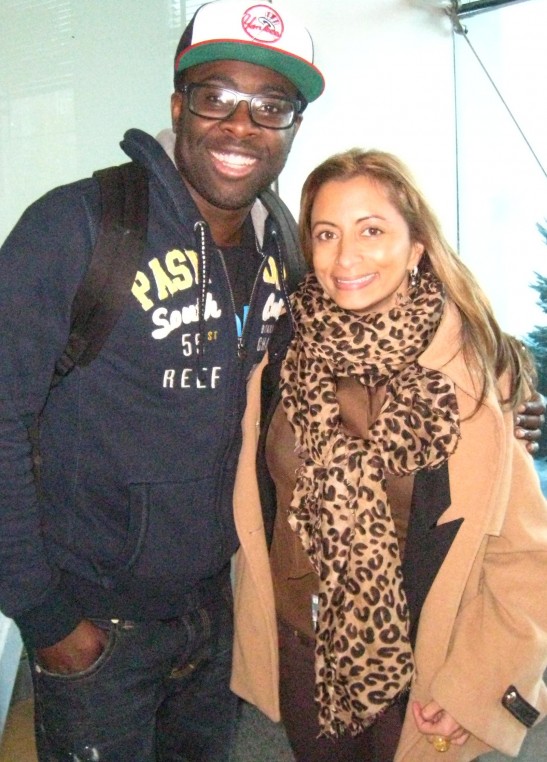 JASMINE WITH KOJO!
Its that time of year! Full of Christmas cheer and numerous Christmas parties to attend. this past 6 days alone I have had 3 work parties, dinners and cocktails, attended the very fabulous posh peoples puffa jacket party for designer Mon Clare at their Christmas cocktails evening, shook my booty at the Adidas EIM end of year bash at under the bridge at Stamford bridge, congratulated the Spirit of London ambassadors at the SOLA Christmas ball at the Mayfair Hotel,
So last week Mariah flew into town to attend Prince Azim’s NOBLE GIFT GALA ball at the Dorchester Hotel in Park Lane. The Noble Gift Gala is an event that pays ‘tribute to those who help support and foster awareness for children and the empowerment of women around the world.’ Mariah was the guest of honour at the event and received the 2011 Noble Gift Humanitarian Award for her efforts in helping disadvantaged children. Mariah has generously donated her time and energy to a range of philanthropic causes near to her heart, including Save the Music and The Make-A-Wish Foundation. A tremendous supporter of children’s charities, both domestic and international, Mariah, in partnership with the Fresh Air Fund founded Camp Mariah, a retreat for inner city children to explore career development. So you can see that Mariah’s impact transcends the music industry to leave an indelible imprint upon the world at large.
On the Saturday morning Upon her arrival, MC was welcomed by a huge crowd of her fans outside the Dorchester who congratulated her on her new baby twins otherwise known as “dembabies” and sang her original Christmas tunes “All I Want For Christmas Is You,” “Oh Santa,” and “When Christmas Comes”. MC spoke to the fans, signed autographs and even took pictures with the fan gifts later posted on her twitter. We hung out in her suite all afternoon and then made our way down to the red carpet where my favourite desperate housewife- Eva Longoria looked sweet in a long flowing purple gown and she bought along her boyfriend of 10 months, Eduardo Cruz, brother of Penelope Cruz. I also spotted legendary model Jerry Hall on our table who wore a knee length black dress and opted for flat shoes as she arrived with her husband Warwick Hemsley. Wealthy lady about town and new reality TV star Tamara Ecclestone arrived in an attention grabbing black sequined dress but none outshone our girl Mariah who was the guest of honour at the event and received the 2011 Noble Gift Humanitarian Award for her efforts in helping disadvantaged children. The event was held at the Dorchester Hotel and honoured Mariah Carey for her charity work. Proceeds went to Eva’s charity-The Eva Longoria Fund and there were plenty of celebrities on hand to donate. We were treated to musical performances by Leona Lewis, Dionne Bromfield and a wonderful band and Mariah made a very heartfelt touching speech when awarded her award by Prince Azim. A great night!