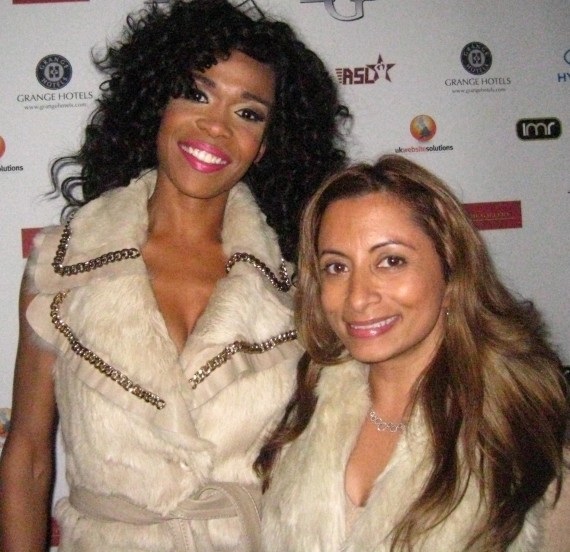 JASMINE WITH MICHELLE WILLIAMS!
This week I’ve been up to Manchester to the BBC’s new media city and back for the CDN CREATIVE DIVERSITY AWARDS, West London’s finest superstar Estelle popped back home for a few days to talk about her forth coming new music, attended 4 early business Christmas parties, 2 dinner parties and launched one new TV show-UK 360! PHEW! IM TIRED JUST READING THAT!

In a week that’s seen Chipmunk celebrate his 21st birthday, Game, Miguel and Jill Scott pop through our capital city for shows I made time for only velvet toned singer with the sveltest figure ever from Destiny’s Child-the diva that is Michele Williams invited me to a very special, opulent night to watch her perform her Single ‘’On the run’’ at The gallery at the Westbury Hotel in Central London. As we arrived the paparazzi were already there awaiting that ‘’stepped out of the car’’ shot and the queue was lined up with guests going all around the block. On entry we were offered unlimited silver trays of prosecco and tiny canapés that were delicious! at the drinks reception where I spotted former eternal singer Vernie, Multi-award winning Casting Directors for commercials, film, TV, dance, music videos, world tours and more-Mark Summers, Shakazulu restaurant owner and man about town roger Payne, MOBO head Kanya King, music PR maven Fiona Ramsay and many other movers and shakers from the more glitterati scene.
I had a lovely catch up with ex eternal singer Vernie who still looks as classy and sophisticated as she ever did and is living her life like it’s gorgeous! 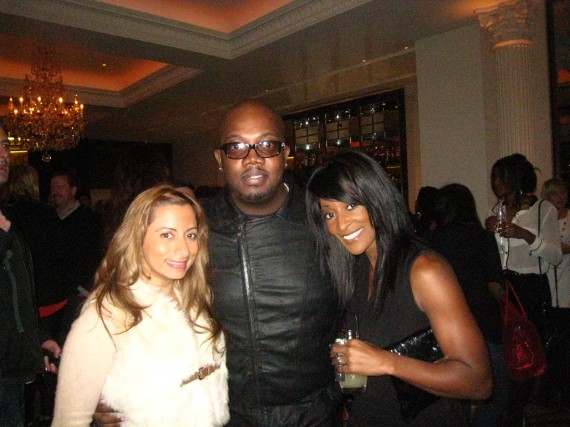 JASMINE WITH EX ETERNAL MEMBER VERNIE AND MUSICAL DIRECTOR JOSEPH ROSS.
Someone also mentioned to me that whilst we were hob nobbing with Michelle Williams, the original line up of girl group Sugababes were in the studio that very night (Mutya, Keisha and Siobhan) and that they were coming back with a vengeance. Well done to them all I say-that was the bestline up and how ironic what with the latest line up already having broken up and been dropped by their current label!
Next a camera crew from SKY LIVING came over to ask if we would mind commenting on a young lady they were making a lookalike programme on. They pointed across to a young lady that they said was a Beyonce lookalike and asked us to comment on her. Well it was awkward. The lady was beautiful in her own way but by no means resembled Bey. In fact I felt bad for her cos it felt like the TV people might be for TV purposes making her look a bit of a fool. the lady was tall, wearing a very un Beyonce style pair of shoes, wrongly matched to skin colour flesh coloured tights, a cheap gold sequinned tunic that barely covered her bum, and had huge bouffant styled black hair! Bey would never have hair darker than honey, her waist would betightly cinched in with a corset and this lady was not in any way a lookalike. She was clearly very nervous and felt out of place. I felt bad for her. The Beyonce I know and love would be smiling 100% of the time in public through her teeth even whilst talking and be extremely confident and work the room. Oh dear. I can’t wait to see the finished show.
Anyhoo-I digress-0the main reason everyone was actually there was to see a REAL destiny’s child. Once we had all finished gossiping we were led to the basement area into a beautifully extravagant room with paintings and plushness where Michelle performed her song alongside 2 female dancers and totally rocked the place with her sassy vocals.
At the end of the night we were all sent home singing the single as we left and handed a beautifully bespoken cupcake made by ‘’cute as a cupcake’’ with an image of Michelle on top. So we literally ate Michelle Williams!