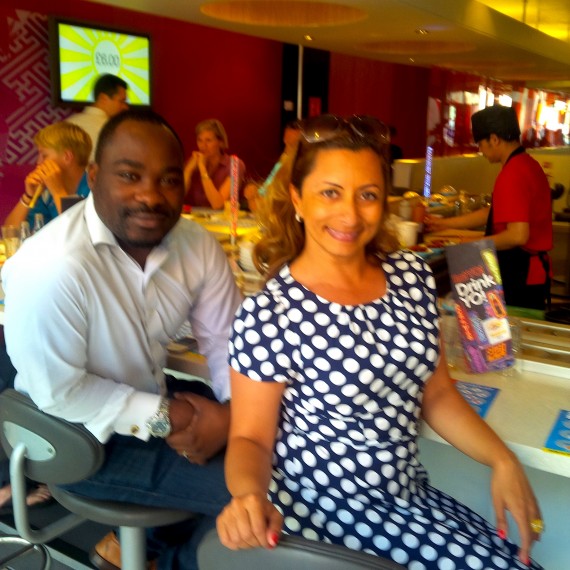 JAS AND ALEX GRAN A SUSHI LUNCH.
Had an extended sushi lunch with African businessman and entrepreneur of all things blingtastic and fab- Alexander Amosu. Alex won’t touch it if it doesn’t sound mister big Willie style. He started off, twenty years ago, by inventing the R&B ringtone mobile phone company. Then went to spend his millions on making gold plated IPads, macs and cell phones as well as the most expensive suit in the world made with real gold threads, all sold in Harrods. He’s got the midas touch- everything he touches really does turn to gold! Then he appeared on African Nigerian version of Dragons Den as a judge, next he bought the African rights to the Sunseeker Yacht business, as well as starting a joint venture with Warner Music to bring in African music acts from the African continent and now is looking to add more to that impressive list, but I am forced to secrecy until his permission to disclose. 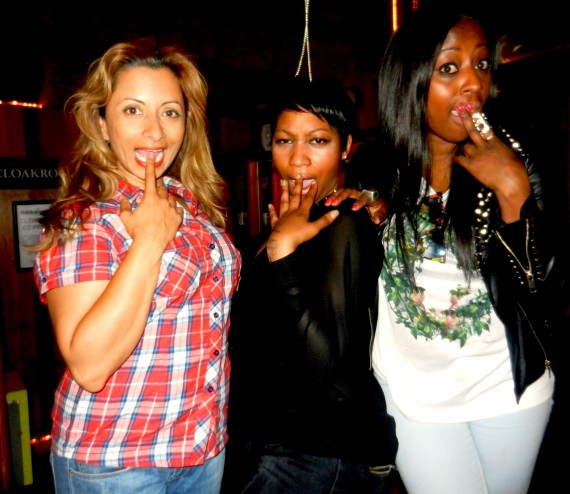 JASMINE WITH SINGER TERRI WALKER AND MISHA B’S MANAGER CHARLENE GRANT.
Had an evening out with my mate, singer Terri Walker. I invited her to join me at the Urban Development showcase night at Cargo in East London, where young music hopefuls were performing their work. Urban collective are an organization that stand at the crossroads where new underground talent meets the music industry. Across their 13-year-old history, artists they’ve helped and worked with are now household names. Amongst the funders and ambassadors for the evening we also hung out with Misha B’s manager Charlene Grant.
Founded in 2007 by Labrinth, his sister ShezAr and led by Shola Ama, more recently the Urban Development Vocal Collective (UDVC) have performed for the BBC Radio 1 Hackney Weekend. Over the last four years the UD Vocal Collective has provided vocals for Wretch 32, Bashy and Omar and performed at festivals such as Rise, Paradise Gardens and Lovebox as well as Urban Development’s flagship events Re:Definition and Industry Takeover. Honing song writing and vocal skills, the UD Vocal Collective project develops industry knowledge and creates shows that raise the bar for live performance.
On arrival we were welcomed by UD boss Pamela McCormick, who introduced us to her guests, and told us a little about the evening. The young performers didn’t disappoint, in fact they were bold, confident and very vocally gifted. They performed their own written material, much of which I could quite easily see charting. They were professional and after a mini showcase to VIP guests, they performed a longer live show on the main stage to a very enthusiastic audience.
Speaking to some of the young music acts I was told ‘’UDVC is a group of inspiration. It’s a collective of voices that come together and create things that are unique and fill a room when you hear them. There isn’t anything or anyone similar to UDVC, which makes us really unique. When you’re around everyone else and on a high from the music, you can bounce of each other, which creates an incredible vibe whether rehearsing, performing or creating new songs.”
Another young vocalist told us ‘‘we come together once a week for three hours in the evening. If we’ve had a performance in the last week, we’d look back on it and evaluate it. What we thought went well, what could be improved etc. If not, we write songs as a collective and practice effective vocal warm up and techniques. We also have workshops with artists who come in and help us. In the past year, we’ve performed at a lot of corporate events and in 2012 we were invited to perform for the Deputy Prime Minister at 10 Downing Street. Performing at BBC Radio 1’s Hackney Weekend and opening the entire festival was probably one of my and the groups highlights. It’s most certainly one of, if not the biggest thing we’ve ever done. We’ve collaborated with a number of artists including Jay Norton, Maverick Sabre, Devlin & Wretch 32.” Now I’m hoping that Terri will get involved and help mentor urban developments talented youth. No pressure Terri. Just do it. 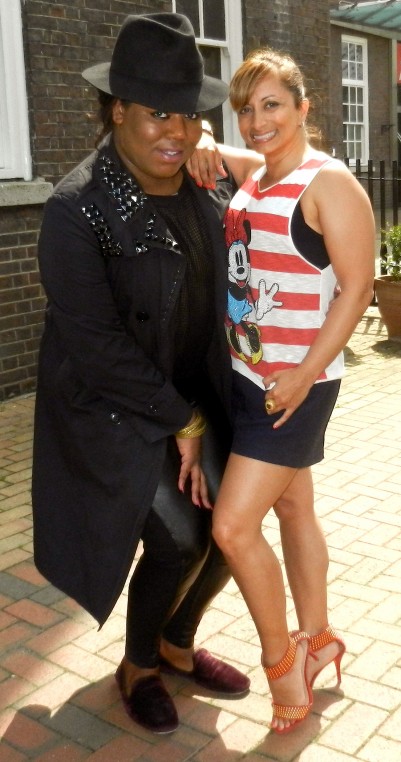 JASMINE WITH STYLIST TO THE STARS -RICHARD SHOYEMI
Finally I caught up with stylist to the stars Richard Shoyemi. I first noticed Richard years ago at social parties where id be thinking ‘’who is that big, very flamboyant man??’’ finally I was informed he was a new stylist on the scene and was working with a number of music acts.
Richard is now a staple on London’s flossy circuit where he can be seen in many music stars entourage backstage at TV and radio studios, model shoots for vogue and more. I wanted to share his very inspiring story with you all as I know there are numerous budding fashionistas amongst my readers.

He grew up in the areas of Shoreditch, Hoxton, Hackney. As a child he attended youth club where they did fashion workshops where they would be taught to make basic fashion. He used to live in Adidas tracksuits as he was influenced my Missy Elliott’s line. His dress sense has since become extremely flamboyant and fabulous. Even on the hot summers day that he meets rapper Eve and myself for lunch, he claims he is ‘’understated’’ in black trilby, black leather and studs. (Once at a D&G party I saw him in an Asian sari, drummer hat and metallic gold booty shorts with guests like Solange and Queen Latifah all asking ‘’who’s that?!).
As a teenager Richard impressed, went to London College of fashion at aged 16 and entered a competition, won and consequently went onto GMTV. He wanted to get his fashion designs out more, and thought he might be able to get his brand out easier if he styled. Next thing he networks for all he’s worth and Sony Music called him to style for a group called ‘Big Bruvas’ ,and ever since then the rest is history. He now dresses American acts like Nicki Minaj, Macy Gray, Lupe Fiasco, Pharrell and Eve as well as British acts like Alesha Dixon, Sabrina Washington, Preeya Kalidas, Shystie and more.
He’s had loads of great moments where his acts have looked just drop dead stunning on red carpets and beyond, but I wanted to know the horror stories.
His worst moment he can recall to date involved Nicki Minaj- WHO HE ABSOLUTELY ADORES SO WAS MORTIFIED AT THIS MOMENT. He was meant to travel to Australia with her but asked for the 24-hour flight to be upgraded. Richard recalled ‘’there’s no way I could do a 24 hour flight in economy-look how big I am!, the record label couldnt foot the bill so after agreeing it with Nicki, I sent my assistant which they were happy with. Unbelievably, my assistant missed her flight and so all shit hit the fan. I knew Nicki wouldn’t be happy and I felt awful. However Nicki understood that I should’ve had a better flight. Finally she agreed I could style her via skype so that’s how we worked it on the night. It went on for a week. That was hard but we are both professionals and I had to make it work’’
Richard says ‘’people have a perception of me which I often try to unsteady, to me my fashion is effortless but to others looks very put together’’
You have to see Richards home to appreciate his fashion extends well beyond his clothes. His furniture is breath taking. Stand out looks include a Swarovski table, which he put together with gold specks and a huge black mannequin covered in blinging gold jewelry. So its not surprising that he is currently in talks to do business with some major Bollywood people for which he is traveling to Mumbai very soon. Go forth and make the world more opulent Richard. May the force of Anna Wintour be with you!