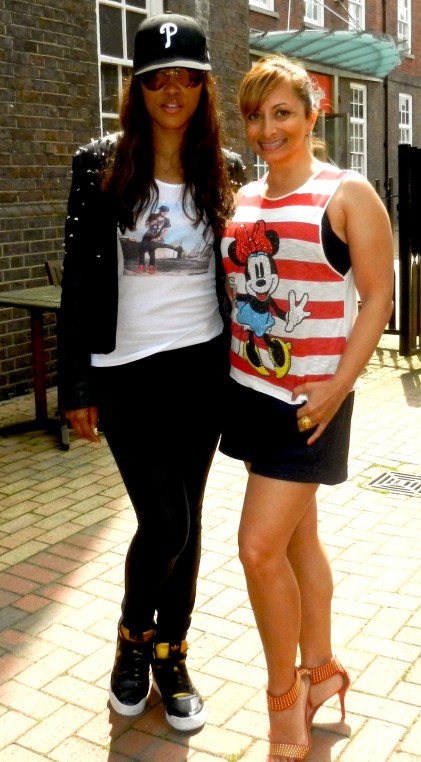 JASMINE WITH EVE AT THEIR ALFRESCO LUNCH 2013!
Every big rap clique these days has their token 1st lady. Whether its So Solids Lisa Maffia or Cash Money’s Nicki Minaj. Back in the day Foxy Brown was aligned with Jay Z and Rah Digga with Busta. Some ladies fell off, and lets be real, others weren’t as sharp as their male counter parts or couldn’t take the pace. Ruff Ryders were a force to be reckoned with as honcho DMX blew up charts, cars and clubs with his hard hitting hits. His 1st lady Eve, was just as strong with her songs like ‘who’s that girl’, ‘let me blow your mind’ and ‘gangsta loving’’. Like many she had her fame early, fast and furious. After taking a decades break she’s flown back onto the scene this year with her new album ‘Liplock’’. Eve invited me to catch up, and so I took her for an al fresco lunch in Ladbroke grove. 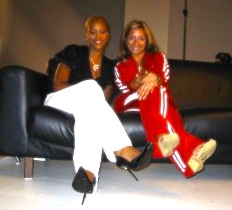 JASMINE AND EVE 10 YEARS AGO MAKING AN EPK FOR UNIVERSAL MUSIC!

After welcoming her back, I reminded her that the last time we had been together ,was when we made her EPK for Universal 10 years ago. We laughed at the memories.
It’s been sooo long since we’ve had a female MC return to the scene with no gimmicks-just flow. Eve explained that ‘‘my TV show took up 4 years of my life so had a break from music. A few Years back I had a whole album ready to go with my single ‘’tambourine’’ but it got shelved’’ by my then record label and then it took me a few years to get free from the record label, which was mentally exhausting. I did my own thing for a while and even put out a dub step record with Benga-I kept it moving’’

This time around it must feel like being a new act coming back to a totally revived, switched up scene. She agreed ‘’Yes there was no big social media when I first came out. I forget to instagram cos I’m always in the moment. My fans get mad with me cos I don’t tweet enough, I have to remind myself to do it, if I had the choice I wouldn’t do it, I prefer to stay private. I’m excited though, everything’s different and new and it’s exciting! I’m exploring again. No one could’ve predicted the growth of the hip-hop monster’’.

We laughed about our memories of her one time boss DMX and his obsession with remote control toys and eccentricities. I explained to Eve that Wiley was a similarly eccentric but genius UK character, . Eve admitted she doesn’t talk or even see DMX anymore. ‘’We did shows last year but this solo album had to me just me. I will always be ruff ryders for life but this had to be my journey’’

Eve has put out her new music on her own label ‘’From the rib’’ which I guessed must be a gift and a curse? ‘‘Yes of course, I grew up on a major label, there are pro’s and con’s. What’s better on a label is that u have a machine that are pushing constantly for the song and video, when you’re solo your teams reach is smaller so that’s a risk and a frustration. I am very lucky with my teams right now and I’ll keep working my ass off’’. Impressively Eve is a fierce rapper not afraid to make a few musical left turns. Her new music highlights sounds as diverse as west coast bangers, afrobeats and dance music. She jumps ‘’now that I’m staying here in the UK I wanna work with more British acts and producers, I really need to do my homework on who’s hot’’. I told her Wiley and Naughty Boy should most definitely be on her research list.
With her new album Liplock, Eve has collaborated with a few old skool names. ‘‘My only preconceived notion before making the album was a mix of my past and present, I listen to hip-hop, afro, dance and you can see that on this album. My Missy, Snoop and Swiss collabs came out of friendships. Also with Game, I know him personally, and knew he’d be down with the record. The remix to ‘’Bad bad’’ used Pusha T on the remix , and is dope, Dawn Richards I didn’t really know but my PR dude made me love her and so I went with that ,but there are some newer acts from the new generation that are still wary of working with me as they don’t know if I’m going to be big again and that’s cool too’’.
Eve has also mentioned that she’d love to work with Andre 3000 and Lauryn Hill but with all Lauryn’s tax and money drama’s I assume this wont be happening any time soon. Eve shrugs ‘’money problems happen to all of us, it happened to me, you gotta watch the people that’s watching your money, artists do need to have this education early on in their career. I learnt to attend the board meetings, I used to hate them and be bored, now I go over every bit of paperwork they send me. Even though I trust my teams now, I always go over all my paperwork’’

However, we also discussed how business and fame dramas don’t just affect long-term legends; even newbies to the game get caught up, hello Justin Bieber! ‘‘He’s young, 19 and smoking some weed, that’s what he should be doing, he’s a kid’’ Eve laughed adding ‘’don’t do drugs kids!’’ but on a serious note Eve does think that one hit wonders on the internet can be a lazy way of making it to the top ‘’ There are so many more 1 hit wonders today than there ever were back then due to internet YouTube stars, in my day you had to do the hard slog, tour, gain respect, do the underground/street kind of thing, young artists miss out on their coming up here’’ 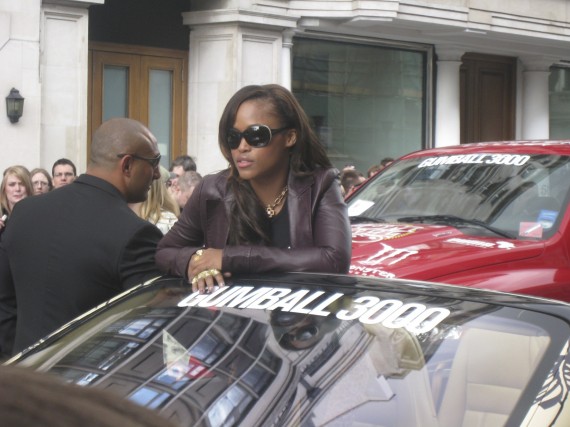 EVE AT HER 1ST EVER GUMBALL RALLY WHERE SHE MET HER NOW PARTNER-GUMBALL BOSS!
Eve now lives in the UK with her boyfriend who runs the infamous Gumball Car Rally. Comparing life in the UK vs USA? ‘’I still feel like a tourist in the UK and see something new daily. In the USA people recognize me easier so its not as easy for me to disappear. I know my American peeps are wrong about British food, the food is here if you know where to find it. The Sunday roasts and sticky toffee pudding is to die for!. I don’t cook myself though, I can do breakfast, my boyfriend gets excited when I finally get in the kitchen lol’’

Going into detail about her she got together with her English gent and issues with cross culture relationships she revealed ‘’Puma had asked me to do Gumball, I met my guy there, I’m all about experiences. With me and my guy it wasn’t planned, I was trying not to be in a relationship, Gumball was my way of escaping my last relationship. He and I met on the rd carpet, the rest of that week we were like ‘’hi’’. When we first got together it was like weird, id never dated a white guy, he had never dated black, we would just stare at each other. Now we’re planning a vacation for me and his 4 kids. The vibe between us is perfect; the problems only come from other ignorant people who are insecure. But I think I’m opening up conversations in the states about positive interracial dating. I thought cos he runs gumball he would be a player but he is such a committed family man, I need that stability. It’s a nice dynamic. I don’t believe in soul mates. I just go with feelings and emotions. He’s my go-to person, best friend and homie. My test for couples? if you can drive for hours together on a road trip and assemble Ikea furniture with no drama, then you’re good! 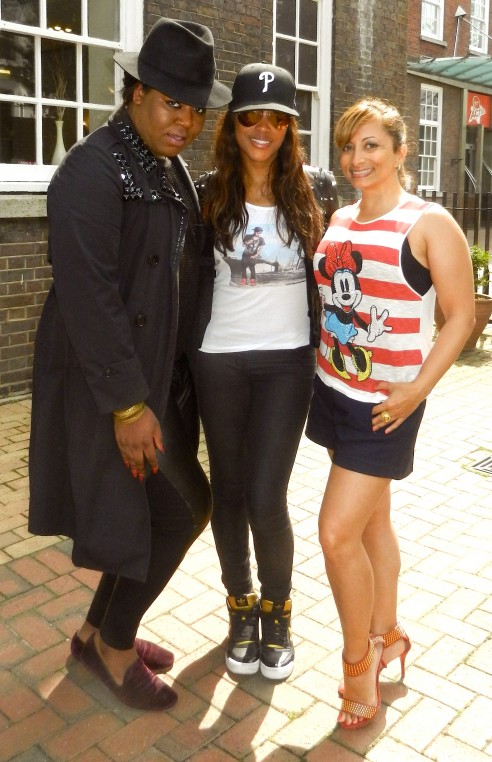 JASMINE WITH EVE AND STYLIST TO THE STARS RICHARD SHOYEMI!
On that good note, we both looked up to find stylist to the stars Richard Shoyemi waiting for us with fresh raw fruit juices. Richard himself is a London based young black man really making moves with his very high profile clientele. I’ll be telling you all about him- next week!