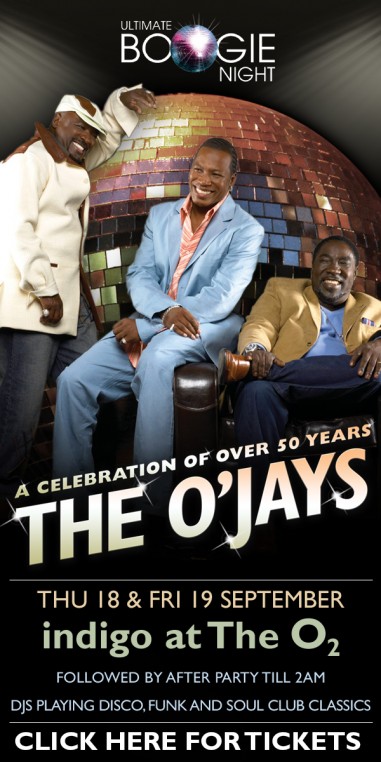 If you’re a music fan then you know the O’Jays. Part of the star studded Motown line up of yesteryear, a band that’s made numerous hits and are still standing. This week they play in London for the first time in over 20 years. 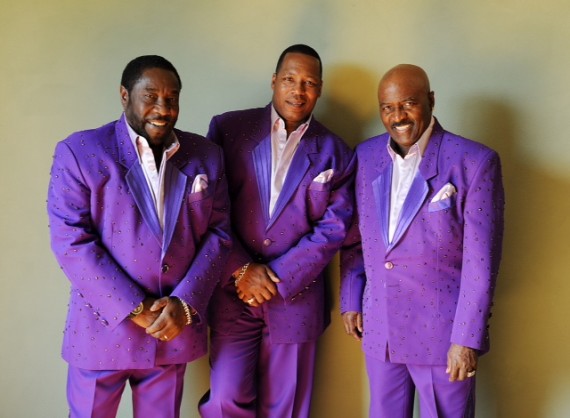 Having recently celebrated their 50th Anniversary, The O’Jays are living legends…American treasures. The term “living legend” is often overused and abused, but with The O’Jays, well, there’s little argument that the honorable tag truly applies. With their place in modern music secure, The O’Jays could have cruise-controlled to that comfy hammock on a sandy beach, umbrella-decorated drinks in hand. Why?
(1) An ocean-wide body of work that spawned 24 US Top Ten smashes and 59 total charted songs.
(2) Incredibly energetic and dynamic live shows.
(3) Mad respect for their Olympian vocals. And …
(4) their social and political impact on generations and nations. But doing things slowly is not Eddie Levert, Sr., Walter Williams, Sr. and Eric Nolan Grant’s modus operandi. After 50+ years making such international hits as Back Stabbers, Darlin’ Darlin’ Baby, Love Train, I Love Music, Use Ta Be My Girl and Have You Had Your Love Today, The O’Jays are light years away from easing up on the gas. And like fine wine, The O’Jays just get better with time.

Through the years, they were blessed to have had the late great choreographer Cholly Adkins around. Adkins taught them the importance of showmanship and how to execute their steps while still delivering their songs. So if you think boy bands like Boyz To Men, Take That , Damage, and Westlife started the harmony R&B genre that juxtaposed smooth lyrics with unison choreography think again. 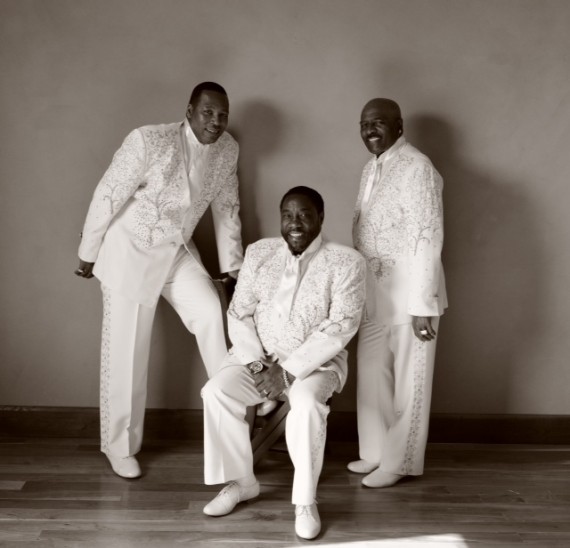 When working at MTV for over a decade, I would accompany black music stars like Snoop Dogg, P Diddy, Jay Z, Beyonce, Mariah and more across global tours in buses, trains, planes and jets. The O’Jays were always a staple part of their I Pod playlists. I was lucky enough to sit down with O’Jays lead man Eddie Levert this weekend to talk about so much. Here are snippets of our chat where we go in on all things R&B, Beyonce, and Ferguson.

JD
Singers from your generation still have an incredible strong live performing voice. Performing so many decades after you first began- what is that like? As many dance routines? What’s different?

EL: The energy level goes down a bit with age, but the fire never dies. We give the audience a performance that lives up to how it used to be back when we started out.

JD
In one of my previous jobs, I often went on tour with music stars. Acts like Snoop and Puffy play your music all the time and even include it in part of their show- (LOVE TRAIN, to finish their joint tour)- are you aware and what are your thoughts on the younger generation representing black music today?

EL: I respect all music. I think these young guys are geniuses with how they take the old stuff and spin it to a modern audience. I think that the younger generation representing black music today is extremely talented.

JD
R&B used to be such a big popular genre with numerous stars…in recent years – especially in the UK- the number of chart stars making great R&B music has really declined. What are your thoughts on this and who from the new generation do you like?

JD
A decade ago, you co-starred in the movie The Fighting Temptations, which starred Cuba Gooding Jr. and Beyoncé Knowles. Beyonce is ruling the music world globally right now- what has she brought to the image of young black powerful women?

EL: Beyonce showed that she is creatively powerful. She doesn’t let the world dictate her personal life. She’s lasted in this business because she has morals and values.

JD
A couple of decades ago, black music stars would unite speak up and protest about injustices in the black community. Not too long ago, Harry Belafonte called out Jay Z and his generation for letting the side down. Recently , not many black stars have spoken about #FERGUSON, what are your thoughts on that? If you were still in your 20’s would you have taken a stand? What’s the difference between the climate now and back then?

In this business, you have to be of sound mind and pick your battles. When you become the opinion and the messenger, they make you sound like the oppressor. I applaud all of the people who have stood up for what’s right with regards to the Ferguson incident. I myself stepped up during the Trayvon Martin incident.

JD
What are your favourite memories of performing for British audiences in the UK?

EL: One of my favorite memories of performing in London was when we were doing “You Are My Sunshine” and an audience member yelled out to me, “Preach that song!’’

‎
The O Jays are performing at the O2 Indigo this week- September 18 and 19th
Tickets available from: www.kililive.com