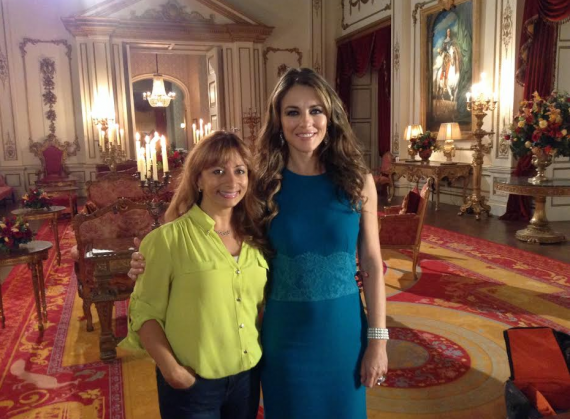 JASMINE WITH ACTRESS LIZ HURLEY ON SET OF ”THE ROYALS”. 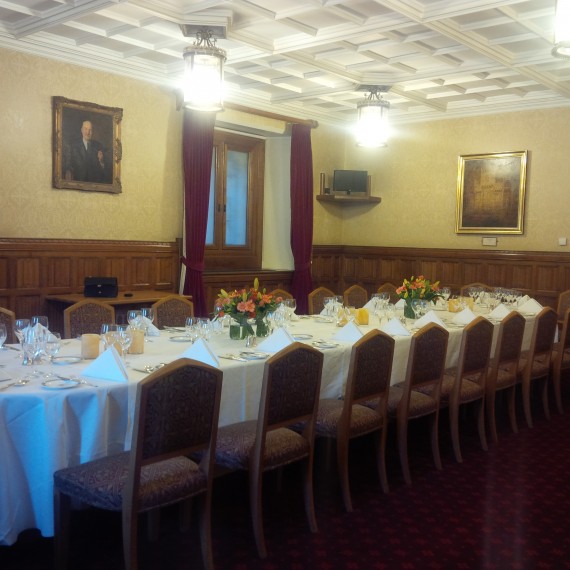 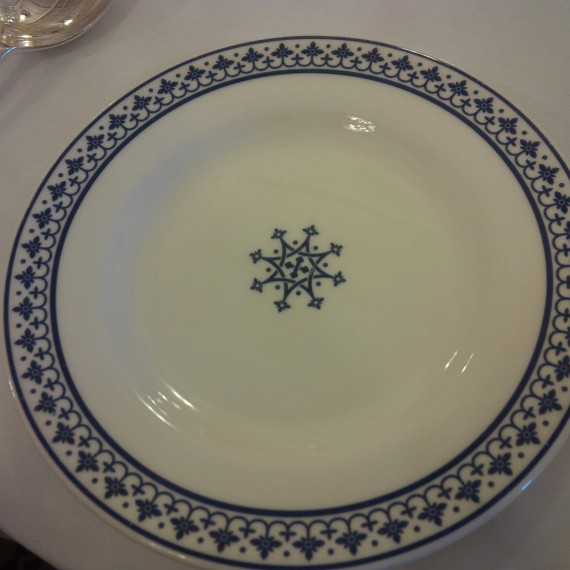 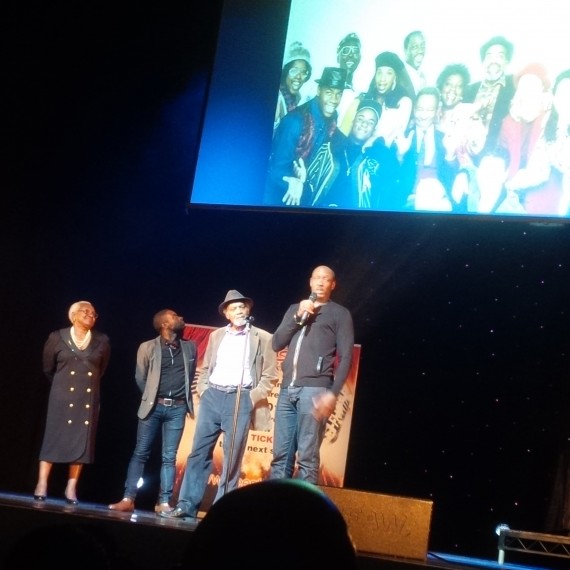 An annual comedy show, where all the comedians and entertainers give their services for the night for free to raise money for the village of Tafo in Ghana. This is the final year after having raised over £100,000 over years and changing the living conditions and quality of life for villagers in Tafo. Faces on the night came from Eastenders, Casualty, Holby City, Stepken K Amos, Richard Blackwood, Kevin J, Eddie Kadi and my fave comic Slim amongst others! A night full of fun and raucous laughter.
RTS Conference
================================= 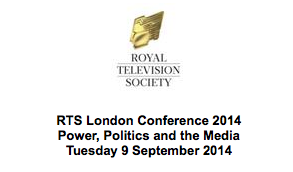 The Royal Television Society’s London Conference 2014-Power, Politics and the Media is a day that always brings out the bona fide leaders and rules of the UK TV industry. The heads of every broadcaster as well as independent TV company directors and execs are fully tanned and glowing fresh off their one month of vacations on their yachts and in full suited swag mode. The gents in their crispest most expensive shirt suit getup and the ladies in their knee length business frocks or elegant feminine suits. (This crowd wouldn’t be seen dead in a pair of vulgar, tacky red-soled Louboutins.

After breakfast coffees, teas and mini croissants, the programme for the Conference (which was full of power players) was opened by president of the Royal Television Society Sir Peter Bazalgette, who hosted a conversation with media mogul- Chase Carey, President and Chief Operating Officer, 21st Century Fox. it was a rare chance to hear directly from one of the most powerful men in world media, Peter Bazalgette spoke to him about building his American business and bidding for more British companies.
Carey said he looks for ”unique content and brands that stand out, we’re investors in good content so that we can create more content, so yes, you can expect us to invest more in British content. The content created right here in the uk clearly appeals to a global marketplace. We aren’t just investing in the uk, we are an enormous investor in creating content in India too amongst other countries too’’.

Session Two had me gripped. It was titled The Future You Don’t Want To Face and chaired by Channel 4 news host Krishnan Guru-Murthy. On the panel were broadcasting’s futurists who spoke about how television on demand is challenging the industry’s incumbent leaders. These High profile disruptors were: Matt Brittin, President, Northern and Central Europe Operations, Google, Karla Geci, Head of International Media, Facebook and Kevin Sutcliffe, Head of News Programming EU, VICE News. They discussed whether television is losing power as a medium, if channels are becoming an unwarranted middleman between programmes and viewers, and who the financial winners and losers are in the world of video on demand.

Clearly the online world is affecting the ay we engage with media. A lot of us acquire news via twitter and brands like vice. Indeed, the BBC has just hired 10 YouTubers to get their radio listeners demographic to under 30. Winners will be those that embrace all the new technology, losers will be those that stick to one platform and channel.

The one thing all this panel agreed on was the difference their brands have with mainstream TV companies ‘’many organisatons are paying a lot of staff to not do very much, which successful digital brands have tiny teams delivering bigger and better’’. Vice’ Kevin Sutcliffe made me laugh when he noted

‘’the BBC mentioned they now had some Vice style programing’’- I said stick to what you do best’’. I.e. stay in your lane!

Amongst the other sessions was Tomorrow The World- After five years in the doldrums, deal-making is back in fashion. Are we, as it seems, on the verge of another re-shaping of the world media order? And, if so, what does this mean for the competitiveness of UK companies and the prospects of the next generation of creative entrepreneurs? ITV Studios Manging Drector Kevin Lygo was particularly hilarious with his legendary comedy timing.

Of course with the Scottish indy referendum debate raging ahead we had to have a debate titled ‘’Kingdom Not United’’. Scotland votes on the 18th of September whether to become an independent country or not. Although the debate has played out on TV as usual social media and digital engagement now loom much larger in the toolbox of political campaigning. The same will apply in the forthcoming 2015 UK general election. In a session looking at what really influences voters, Laura Kuenssberg is joined by three players who are the heart of this debate. 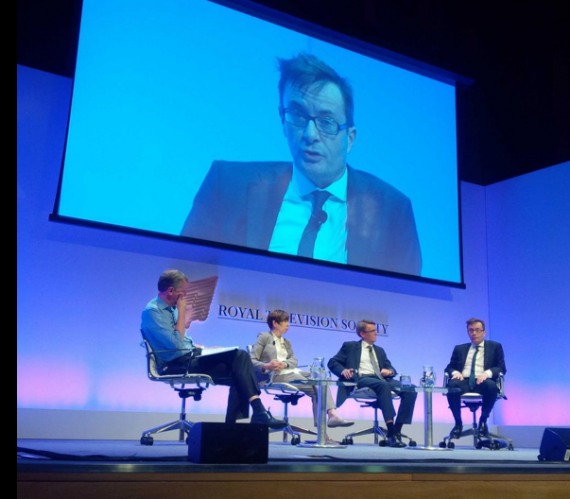 The next session that had me all fired up was ‘’Have I Got News For You?’’ Chaired by Stewart Purvis CBE, Professor of Television Journalism, City University. The topic covered was ‘The BBC believes it is going to be an extremely difficult undertaking cutting 400 jobs without affecting quality. Do its competitors feel the same kind of threat of cutbacks or are the BBC’s problems an opportunity for them? Leaders of the three main providers talk about the sustainability of TV news in the fully digital age. Speakers included the great John Hardie, Chief Executive, ITN, the equally legendary John Ryley, Head of Sky News, BSkyB and the incredible force that is Fran Unsworth, Deputy Director of News & Current Affairs, BBC. Apparently 25-34 year olds are the fastest group leaving on air news viewing. 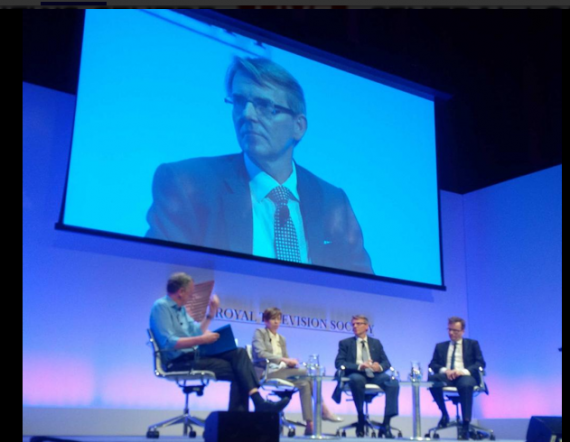 ”Have I got news for you” panel.Chief Exec ITN John Hardie makes great points about sustaining TV news in a Digital age 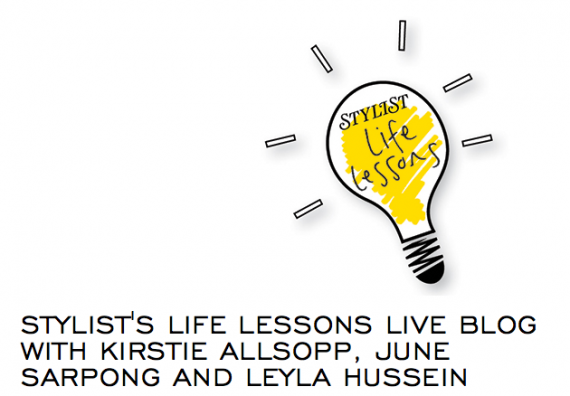 Next it was off to stylist magazine’s regular evening gathering. Yet another women empowering women social gathering. After a quick glass of wine in the opulent bar of the Ham Yard Hotel, we were treated to three speakers giving us their life lesson about what every woman should know. 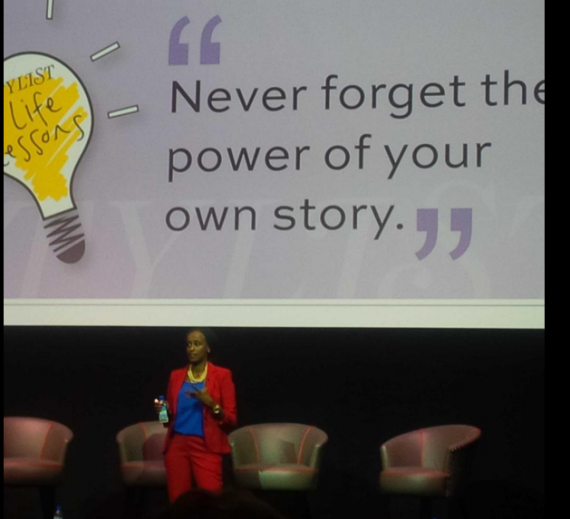 Up first was FGM victim, and survivor Leyla Hussein, now an FGM campaigner. She stated that she wanted to be just a mum that didn’t want her daughter to be ashamed of her virgina and be subjected to FGM. She’s ‎Had to have regular therapy to understand, deal with and repair the relationship with her mother who had to endure FGM twice. Leyla said

‘’I realised she was also a victim. We now celebrate the fact that her granddaughter – my daughter- isn’t cut’’. 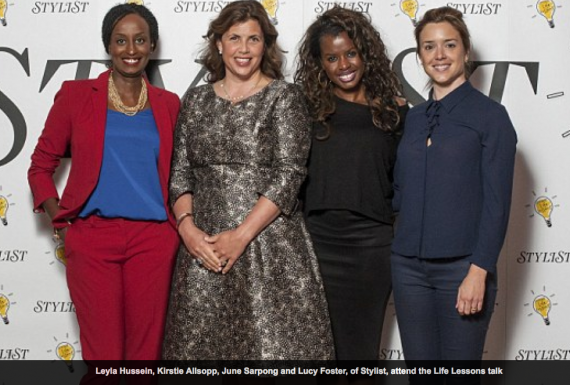 ‎Next up was my old MTV compadre – presenter June Sarpong, who spoke about her early upbringing in Walthamstow e17. Wondering through the local Market as a young girl. Acknowledging her multicultural community ‘’my School was like looking at a poster of United Nations kids. We had Indian Jewish, Indian, Chinese, everything. It was a Good grounding for my media career being surrounded by different people and being able to talk to anybody’’. She expanded on her Ghanaian background. The fact that her Mother is 67 and on her 3rd marriage but revealed that her mum hadn’t wanted to have her 3rd one yet cos her daughter June still hasn’t had her first!

‎June ended with the well known quote by Marianne Williamson.

‘’ Our deepest fear is not that we are inadequate. Our deepest fear is that we are powerful beyond measure. It is our light, not our darkness that most frightens us. We ask ourselves, ‘Who am I to be brilliant, gorgeous, talented, fabulous?’ Actually, who are you not to be? You are a child of God. Your playing small does not serve the world.’’

June advised us females to Google Anne Marie slaughter – an American who talks about fertility. June added that she feels the government needs to give young people emotional intelligence. ‘’I personally think that after 16 they should have tantric sex lessons. Boys in Kerala India have tantric sex lessons’’. Anyone fancy a trip to Kerala?

The 3rd and final speaker was presenter of location location location. The amazingly powerful and engaging Kirsty allsop who brought up the issue of women and fertility again after getting a lot of flack for it in the press in recent months. .

‘’What have I learnt that every woman should be aware of? Having the guts to tell men that you can’t have healthy babies for as long as them. “Be honest with each other…friends/partners/daughters*/sons….we can have careers at any age….but not make healthy babies. For now, we haven’t opened the fertility window wider. It’s easier and less of a heartache to have kids when our bodies allow us to when we’re younger. Nature is not a feminist! “Getting to the young girls is a very new thing for me. People tell me I don’t need to talk about it but clearly I do. I don’t want to make people feel judged. All young men and women should know. In the UK we are the oldest women to give birth in the world! Society has shifted massively in one generation. I set a date by which I’d have a baby and two male friends had even agreed to be my babydaddy. But luckily I then met my partner”

Kirsty also talked about women’s relationships with one another ‘’‎Women need to be much less tough on other women. In careers, A woman who has kids is a multi-tasker with better skills. They don’t come in to work going “I went to a great festival this weekend and am hung-over” Equality for all women is something we must always keep fighting for!
‎
Now I’m excited about getting my two-step on, at the legends that are the O Jays gig, and then to end the week- the Asian Achievers Awards- LIFE! LIVE IT!