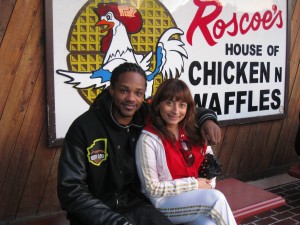 The past week has seen me interviewing video directors, taking in a soiree at the Pigalle Club for Puff Daddys new music, dining with the Dolce and Gabbana team, watching new film screenings and getting my very first fish pedicure! The fish pedicure was at new celeb spa anesis in Clapham- I might have been there in body but my mind is still so jet lagged it was on LA time.

Out in LA one afternoon I asked my Brit mate who had never visited before what they wanted to see. Imagining they would state sights like City Walk, Universal Studios, Venice Beach, Melrose, House of Blues etc, I waited with bated breath. He said Compton and Roscoe’s Chicken House!!. Well I was as you can imagine not impressed. After dragging them around the main sights-which I think you should always do when arriving at a new city to get a feel of its history- I got a message from my friend fellow Brit music producer and artist Dready. Dready was in LA on business. He’s usually based between London, New York and L.A.  But don’t get his glam travels twisted-he’s born and bred in Birmingham. He agreed to fulfil our mates Roscoe’s ambition and so it came to be that we had a big group lunch at Roscoe’s. It was the worst thing we could’ve done. The food gave us bellyache and wasn’t even as good as KFC. I recall the days it used to taste fresher. Of course chicken accompanied by collard greens, waffles and corn bred is delicious. Alas they were all tasty except the chicken. That’s what happens with mass produced fast food success. The main seller gets over looked and eventually a Nandos comes along and takes all your business!

I’ve always been fascinated watching music producers make beats in the studio so imagine my excitement when a few nights later I got an exciting text from Dready informing me that he was in the studio with his team that night (which included his friend Busta Rhymes) and I could visit if I was free. Well readers, as I’ve always said, when given an opportunity to watch genius at work I’m always free. So in the dead of the night  (nocturnal music folk) we cruised down to one of L.A’s most successful studios (highlighted by the multitude of plaques on the walls) and chilled for a couple of hours watching Dready at work.

As soon as we arrived though we were bombarded by the now expected USA VS UK banter between the Brits and the Yanks. Them cussing our society, us cussing theirs even though we all know its mutual love society in reality.

Dreadys been in America for a few years now where he moved to after about 10 years in London where he moved after his earlier brummy days. As the old adage goes he trekked to London to find his fortune in the music game. He hooked up with South London music pioneers So solid crew in 2002 and joined the group as a producer where he worked on groups tracks (mostly on their 2nd album) as well as more specifically for both group front acts Lisa Maffia and Asher D otherwise known as Ashley Walters.

Lisa recalls those early days like this ‘’Not only is he like a brother to me cos he helped create my album, he was the craziest and most dramatic out of all of us, his energy was nuts and on a Sunday morning he was the energiser when we needed to be hyped up- the best!’’.

Dready recalls those So Solid days as his first experience with any public acknowledgment and publicly.

Since then he’s worked with many UK acts like Ms Dynmite, Jay Sean, Lemar. Then when the ROC family came to town Dready had the fortune to work with Beenie Seagal and Memphis Bleak. The constant graft paid off and next female MC Rah Digga came knocking at his door. He worked at length with her and it was she who intro him to her conglomerate head honcho- Trevor Tahiem Smith Junior otherwise known as Busta Rhymes in 2005 in Yew york  Now its well known that he’s an essential part of Busta’s camp with he and Busta regularly shouting each others praises on twitter and so on .

Dready has been around the world a few times now, first with his old pal Jay Sean who he worked with back in the day and now Busta who he says he connects well with because ‘’ our Ideas are real creative together- whether we’re in Miami or Europe I know what he likes, a straight hardcore head nod effect with a club feel’’. Dready reminisces about his old music partner Jay Sean as he recalls ‘’I remember doing shows with Jay where there were 3000 people. It was in Dubai with 30000 people on the beach. In India he’s an absolute superstar. I still see Jay and we get drunk together in hotel bars. I did a Sean Paul duet with Jay Sean!’’. Explaining why Jay has made it big in the USA Dready says ‘’Even though the USA are late on some entertainment, as long as it makes money they’ll eventually get into it’’.

Asked why the States was important for him to work in he explains ‘’ I had done a lot of projects in the UK-I’d worked with everyone I wanted to- and had chart hits at home. It was time to conquer the USA’’.

Dreadys also kept himself diverse by spreading his talent around and also worked alongside Jeezy and Noreaga. Just recently he did Llyod Banks  ” any girl” and was particularly ampt about that as he has wanted to work with G Unit for a minute now, He’s also just made a new Chipmunk track that sounded amazing to my ears and had the whole studio bouncing their heads mad bouncy. He keeps Busta ahead of the UK sound by playing him British music and dub step on their tour bus although he does confide ‘’Its about making good music. I get some ridiculous UK acts requests. They demand 16 bars for “my mix tape” by Busta as if its really that easy-its professional business!’’.

Currently Dready has beats on leaked songs “Clear the air” with Shabba ,Mavado and Akon. His own first official song on a new album is called “How yo really want it”  He’s got his feet in all the right doors as he’s also now working heavily with Dr Dre’s new female solo vocalist Nikki Grier signed to Aftermath who was also in the studio alongside us and played us some of her music which sounds very strong.

I wondered whether being on the west coast whether Dready had to get into the ‘’west coast music beat’’ by indulging in the ‘’aroma of the west coast?’’. He laughed and chided me ‘’no Jazz! I’ve never smoked-ever!’’.

Now that he’s an international player his ambitions that are left include ‘’opening a performing arts school back home and saving enough money to send his son to private school’’. What a player. Putting Birmingham on the map with ambition and such positive energy as this, can anything stop him?  Lets hope not.