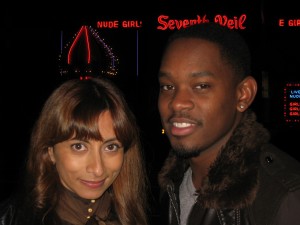 So after Christmas in Utah with the Cannon’s (Mariah and Nick) we flew back to LA where we stayed in the Cannons guest room which Mrs C had also turned into a little home recording studio. To see her vocal booth customised with pink initials and butterflies and note her song writing pads in the room was breath taking as I acknowledged that this was a sacred space where hit upon hit was written. Awakening daily to look out across the Bel Air Hills and at the stunning LA view is a sight to behold. Certainly an inspiration to do as well as you can in life and make the most of every moment. Mrs C is truly in domestic mode as she cooked a variety of Italian specialities for our dinner daily. And when I say cooked I mean totally fresh from scratch. No cook-in sauces for this lady as she chops, peels and crushes herb after herb and patiently enjoys her ‘’cooking with Mrs Cannon’’ moment.

It was now only a couple of days before New Years Eve but we managed to fit in a fair amount of fun before the clock struck 12. I enjoyed a couple of moments in the Cannons hot tub overlooking the twinkling lights of the city, we visited our favourite LA shopping area-The Grove- again, we rented a car to get us around and had much fun keeping up with the crazy LA traffic and mad drivers as we missed exit after exit on the notorious 405 freeway-so called cos you can be stuck on it for 4 or 5 hours!

One night the boyfriend took me on a surprise drive up through the winding hills as I wondered where we were going. After a while he stopped and muttered ‘’damn its not even lit up-why not!’’ in frustration. I looked around and noticed we were right underneath the infamous Hollywood sign, which I could just make out in the dark blue night. Even I was traumatised. How many movies have you seen the statuesque, towering letters spelling out the movie industries most sexy location brightly lit up at night?. In my trauma i tweeted to enquire whether this was a one off? Had there been a problem paying the electric bill? , I was speedily (don’t you juts love twitter-your online concierge!) informed that ‘’its only ever lit up in movies Jas cos a film crew lights it up’’. Well, I was flabbergasted. Talk about years of false advertising and myth!. I wanted to start up a petition there and then to have the Hollywood sign permanently lit up at night. How amazing would this be for the millions of annual tourists?.

We also took in Venice Beach. I love watching the muscle men on Muscle Beach do their thing. its old fashioned, fun and free! The one thing that has changed from yesteryear though is the number of hip-hop outfits and crews that have taken up residence there and hustler their CD’s to unsuspecting tourists. Nowadays they even hand you Dre Beats headphones to hear their same ole same ole west coast tinged vocals. Oh how we laughed. if it wasn’t boys peddling their mix tapes it was dance crews taking over the street entertainment with their unison dance routines and theatrical banter. Those Step Up movies have a lot to answer for. Oh well. At least the kids have a side hustle that’s legal!

Finally New Years Eve was upon us and after I called and wished my UK folk a great night with a prosperous year ahead, I settled down to help Mr C and the crew prepare the party room for the 40 or so guests that were expected that night. Mr C was checking his decks whilst we arranged party hats, poppers, beads, top hats and balloons strategically around the room to make it look as festive as Mrs C would expect.

This year the party was a very small, intimate gathering of close family and friends. Debbie Allen- the amazing dancer/actress from the legendary FAME series, who is also good friends with Mariah- made a seafood gumbo and we all indulged in that and a feast of soul food. The bar was overseen by Mrs C who ensured that all her guests had a drink to hand. Everyone danced and were merry and at midnight it was ridiculously festive with confetti bombs and hugs and kisses all round. A lovely L.A New Years Eve start to 2011.

The next few days saw me visiting Debbie Allen’s performing arts school in Crenshaw which was most impressive. A stand out venue in the hood where numerous youngsters attend to do ballet, tap, jazz, hip hop and more. Huge new studios, locker rooms and facilities that were clearly upkept beautifully and adorned with Ms Allens achievements. I salute you lady- very impressive!.

I also spent a long girly 2-hour catch up session in Mrs C’s pool with her as she exercised and we discussed everything under the sun from music, life, love, family, and nappies! Yes- nappies-or diapers as the Americans call them- were a topic that was intriguing. I even saw a shooting star!

One afternoon my mate asked me to open my ‘’tunnel vision-ed mind’’ and join him at LA GUN CLUB. Well you can imagine the hostile rejection I put up. I have always loathed guns and never seen where there could be fun attached to their use. Especially after all the youth on youth gun crime back home that I witness. I was informed that like archery and bowling, to many in the world it was merely another sport skill and I should try it at least once before writing it off. So I did. It was exhilarating and I was surprisingly very good at it considering I’d never even held a gun before. Clearly the shooters along the shooting range were there to test their accuracy skills. But it still wasn’t my idea of fun. Every time a shot went off I jumped out of my skin-even with the eye and ear protectors on. Empty bullet shells were flying all around and I couldn’t believe that I, as a regular Joe Schmo could walk off the street and be trusted to hold and use a firearm of my choice without any previous experience or training. Hilariously my target was riddled with bullet holes whilst my mates was barely hit. At least he now knows not to mess with me. I tried it once. it was an experience. I wont be doing it again. 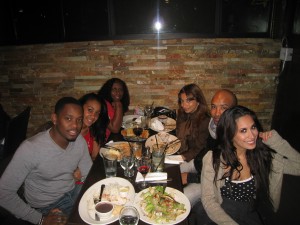 My final bit of LA fun was organising a dinner with some Brits before I flew home. I reached out to actor Aml Ameen who used to star in THE BILL and movies like KIDULTHOOD. He moved to LA last year with his lady to star in a new Hollywood series called Harry’s Law. He suggested our Brit dinner should be held at Brazilian food eatery Bosanova. I also invited former Eastenders actress and singer Preeya Kalidas  who just happened to be out there and former MTV diva Janet Shaw. We spent a hilarious evening comparing stories and Aml filled us in on his TV series. Weekly drama Harry’s Law began airing in the USA from January 17th on NBC from 10pm and is the new David E Kelley show. (He made Alley McBeal and Boston Legal too!) It also stars Oscar and Golden Globe winner Kathy Bates alongside our Brit boy Aml!. Whilst in LA I was really proud to read In recent press junkets Kathy said this about our boy… “I’m really taken with this young man, Aml Ameen who’s from the UK who comes over. He plays Malcolm and he’s a wonderful young actor. And we’ve had a lot of terrific scenes together and I’ve enjoyed so much the chemistry between the two of us’’. So Aml looks likely to be a household name stateside within weeks!. We had much fun over dinner breaking down his American accent which to American ears sounds flawless!.

It seems that Aml is not the only talent in his family- whilst he’s carving a career out in Hollywood his brother Mikel Ameen is building up a big following this side of the pond with his music and acting too. His captivating debut E.P album ‘’Gift Rap’’ includes 13 tracks bursting with originality ,charisma & content. With half the tracks produced by Mikel himself clearly creativity runs strong in the Ameen family genes!
Look out for the west end launch of AmeenDream Entertainment in April in the UK( where 3 short films will be screened- The Pick Up, Special Delivery, and Drinks Drugs and KFC (All Directed and Produced by Aml Ameen). On that proud TEAMUK note I jetted off to catch up with yet another Brit doing big things Stateside-more in next weeks juice!