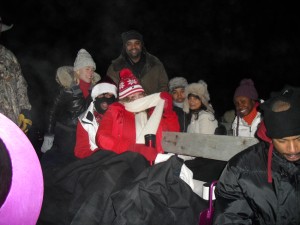 JASMINE WITH THE CANNON’S AND FRIENDS ON THE CHRISTMAS SLEIGH RIDE!

I know we’re already 2 weeks into 2011 but I only just finished my Christmas adventure which this year was longer than ever!. Why not!? I deserve it! I work damn hard all year and you know what they say- work hard, play as hard. My annual end of year frolic with the cannons (Mariah and Nick) this year began in L.A. mid December we flew out to my cousin Jani’s lair where for a solid week it rained more torrentially than I’ve ever witnessed in the UK. It was heavy, non-stop 24-7 pouring cats and dogs. On December 21st we flew into Utah for Christmas week. As Mrs Cannon is pregnant it was decided that our usual Aspen jaunt would be a little too high altitude wise for the Carey-Cannon twins to breath as the oxygen is so thin up that high -its bad enough for us folks outside the womb!. We’ve been to aspen in the past where friends have been hospitalised by altitude sickness so the idea of the cannon twins somersaulting in Mrs Cannons tummy unable to breath was not pip. Utah on the other hand is just as snowy, magical and surrounded by mountains and canyons so we all jetted off to park city where we enjoyed a really relaxed, picturesque, once in a lifetime vacation.

In most of the UK’s cities we cant even imagine what the snowy hilltops and mountains in Utah look like. They’re breath taking, picture post card images that you think only exist in olde world postcards. We stayed near somewhere called ‘Lambs Canyon’ which if you know about Mariah you know was VERY appropriate.

The Cannons do very traditional Christmas’ with stunning magical mountains, covered with snow glistening like millions of diamonds, homes that look like ginger bread cribs with white sugar frosting perching aside the hills. Winter vacation homes in the snow are all similar with varying levels of extreme fabulosity. All are golden wood structures with numerous pillars and alcoves, high ceilings, a multitude of levels, playrooms that contain pool tables, wii consoles, karaoke machines, cinema rooms, and a number of en suite bedrooms. They also include luxuries like roaring log fires (which I tried to build myself a couple of times but then was banned in case I killed us all with smoke poisoning or worse!) , a giant main Christmas tree in the living room, a second tree in the playroom for dressing on Christmas eve, a big family kitchen where families gather around the island worktop, a hot tub outside overlooking the twinkling lights of the city, and of course a view straight out of a block buster movie. This trip was different to all the rest as the Cannons are pregnant and that put a whole new, calm, blessed spin on festivities. We were excited just to be altogether.

Daily our meals were a group effort led by our Swedish friends Kristen and Josephine so we referred to meal times as ‘Kristens Kitchen’. Bedrooms with 4 poster princess style beds were made extremely good use of, the 4 cannon puppies (JJ, Chacha, Dolomite and Jackie Lambchop) were as ever as cute and rambunctious as ever running around causing pandemonium, playing in the snow. I took them all for a daily walk which in itself was a crazy, fun task as they legged it up and down the hills dragging us into deep 4 foot snow drifts as they sniffed out wild deer. We ventured out very few times to shop in town, which had both a quaint little old worlde town as well as massive fashion malls with 75 store minimum outlets.

At the start of the trip Mariah reminded us of her usual vacation rule where we are requested not to spend 24-7 on our electronic gadgets. Between us there were a lot of Macs, Blackberry’s and IPads so it was a relief that the rule was set. After all who wants to spend such a once in a lifetime moment with all around them being anti social on their texts and e mails all day long. So imagine my delight and joy when one afternoon as she popped out for a quick shop and I sneakily logged onto my Mac,I caught her slipping as she had just tweeted! Now the problem was, did I acknowledge I myself had broken the rule in order to catch her? Her bro Shawn and I decided it would be worth the jokes to out her so we told her off via twitter. She gave as good as she got and cussed us back!. Good times!

The one thing we were allowed to over rule the rule was playing Wii- we tried bowling and other sports but it was the Michael Jackson dance game that had us all sweating, screaming, dancing and singing at the top of our voices for hours! I won 3 games, Nick won 3 games but our friend Rachels daughter , lil 15 year Sade got the highest perfect score! (She is after all a dancer and we’d expect nothing less!) . The workout was pretty crazy up in that high mountain altitude, though and 3 of us went through 12 bottles of water in an hour.

One night we decided that Mrs C needed pampering what with the usual pregnancy aches and pains taking their toll so all the girls pitched in to give her girl time with hand, foot and head massages with hot oil until she fell asleep.

Many nights we jumped into the hot tub (minus Mrs C ) watching the twinkling stars in the ink black sky, minus the usual annual festive flute of champagne for obvious reasons. One particular hot tub moment of hilarity came when 3 of us were in the hot tub trying to persuade Nick to join us. He was of course making the usual ‘’black men don’t do snow in their underwear’ noises.

We also spent our nights after dinner playing games like Balderdash and Catchphrase. I should be used to it but whenever the answer to the clue I’m giving comes up as ‘’Mariah Carey’’ or ‘’Nick Cannon’’ it’s the weirdest. Surreal. Imagine being the answer in a board game?

There was one particular night when I was so angry I could’ve exploded. Throughout our years of friendship we have always had the fun UK VS USA banter. This night was one to remember. My word that I had to have my team guess was ‘’cracker-jack’’. I was able to have my team guess the word ‘Jack’ easily as that’s the name of Mariah’s first most loved dog and the worlds most famous canine after his adventures with Mimi. Then I attempted to describe a Christmas cracker-the type that you pull at the dinner table, which contains paper party hats and gifts. Well, a whole screaming drama occurred as I didn’t realise Americans had no clue what a Christmas cracker was. No one knew what a ‘’paper filled column containing gifts and hats that’s placed at the dinner table’’ was. I was cussed solidly for my efforts and when I looked to my fellow Brit for support to confirm that Christmas crackers existed he abandoned me as he was on opposing team America!. Vex.com.

On Christmas Eve we had our usual Midnight mass -at home this year -with our friend pastor Kase leading the proceedings. It was a warm, traditional, festive ceremony that we all partook in and reminded ourselves about the true meaning of the holiday. The same night we were treated to Mrs C’s special clam linguini with stuffed shells, baked clams, garlic bread, salad and authentic red tomato sauce that was delish!

Our Christmas day Sleigh ride was very calm compared to most years as Mrs C is up the duff ‘’carrying dem babies’’. Usually we hurtle through a crazy, bumpy ride through the forest. This year we were ultra careful to ensure the slope was smooth and bump free. After all we had our own bump to look after and protect LOL!. However we still sang Christmas songs and Mrs C’s new Christmas album (particularly ‘’’Oh Santa’’ at the top of our voices!.

In past years we’ve attempted to reason with Mr C about not waking us at 6am, dressed as Santa to open our gifts. Hilariously, it’s taken us this many years to just accept its going to happen. So at 8am after his wife asked him to let us sleep a little longer, ‘Saint Nick’ woke us traditional style with a cowbell and pounding on doors dressed as Santa.

My gifts included a gigantic bottle of hot pepper sauce packed and presented in my name. It was so heavy to pick up and hold that I’ve had to leave it at the Cannons on their bar area in case anyone should ever request a bloody Mary!

I got the usual necessity gifts too like hats, scarves, and smellies, as well as some lovely trinkets and framed photos but my favourites were a flip camera and a pair of Mariah Carey black quilted chain boots that she designed for the HOME SHOPPING NETWORK that I’ll be rolling around with in 2011.

On December 28th we took our last mountain walk with the crazy dog circus and drove back through the canyons to Salt Lake City airport where we jetted back to Los Angeles for New Year. Roll on 2011!.