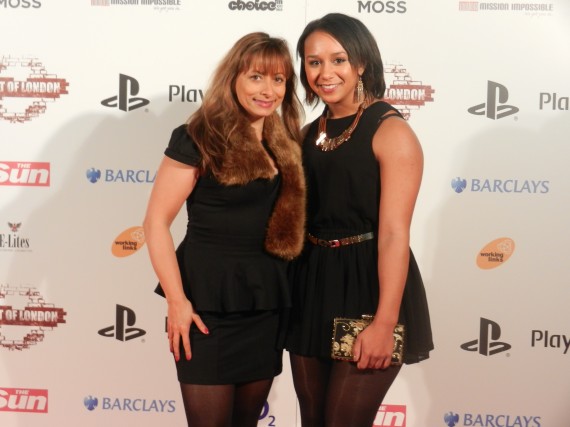 JASMINE WITH BRITISH OLYMPIAN WEIGHT LIFTER ZOE SMITH AT THE SOLA AWARDS!
Its Christmas week and no doubt by now most of us are sick of the endless rounds of office and social parties and just want to tuck into that big Christmas dinner! I have already had 6 consecutive Christmas dinners in a row so I’m already sick of it. Why do restaurants do this-save it for the 25th! 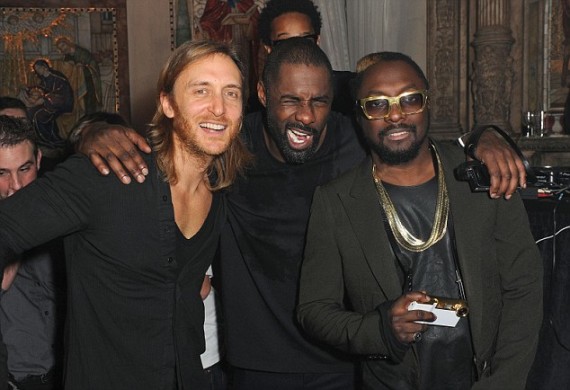 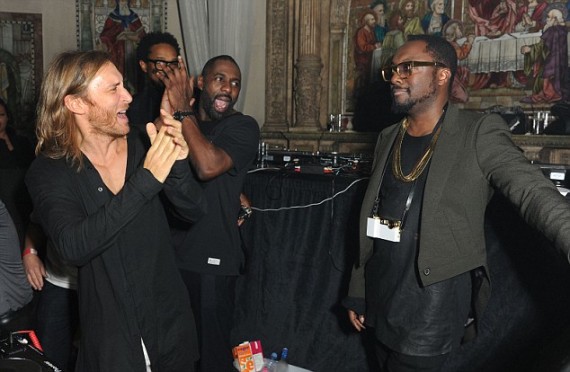 FUN WITH THE BOYS AT WILL’S PARTY!
It’s been all GO, GO, GO for me with one event after another! I’ve been singing Kanye/ Jay Z’s ‘’on to the next one…’’ over and over in my head whilst rushing from one venue to another and slipping from one frock to another….from Winter Wonderland in Hyde Park, to attending St Pauls cathedral for Christmas carol services, to record label Christmas parties, to Will I Am’s latest party-he definitely takes the crown from Puffy as liking any excuse to get with a brand and throw a party! 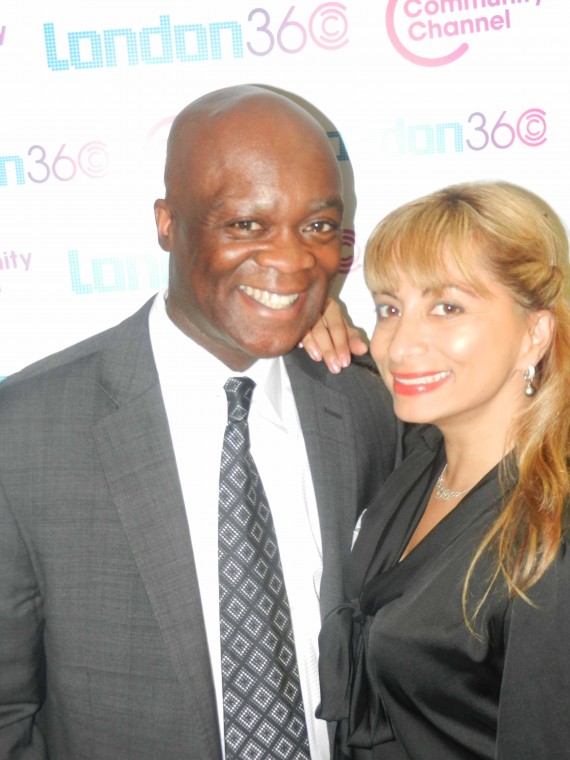 JASMINE WITH BBC LONDON’S TOP BROADCASTER EDDIER NESTOR FOR THE MEDIA DEBATE AT BBC BROADCASTING HOUSE.
I began the week hosting a breakfast debate for Media Trust at BBC NEW BROADCASTING HOUSE for a very select group of media editors (BBC, ITV, ITN, THE VOICE, local press), journalists, London funders and organisations (Amy Winehouse foundation, Isis young offenders prison, transport for all, blind sport, Lambeth dads and many more) . The debate was chaired by the ever-articulate broadcaster Eddie Nestor who proved why he’s the best thing on BBC RADIO LONDON. Like a true verbal choreographer he ran the debate better than Dimbleby on Question Time asking all the right questions, goading and cajoling where needed and controlling the conversation if it got too heated. A great moment in an amazing new building (that’s open to the public from April next year!). 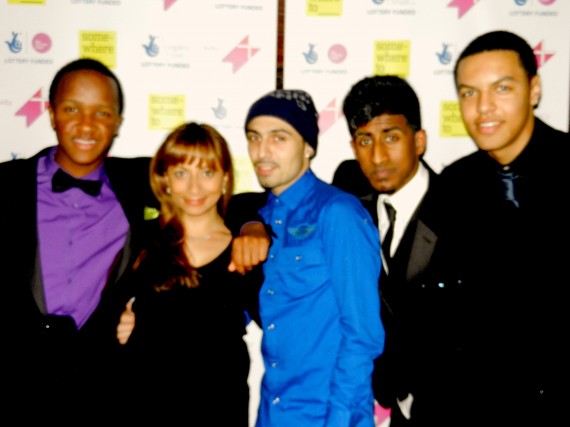 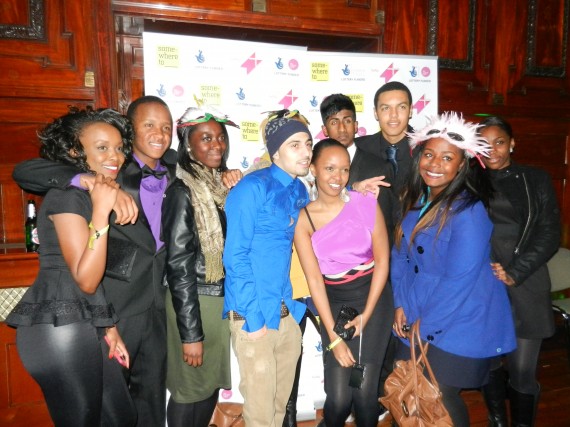 ADAM WITH THE SOMEWHERE_TO WINNERS AND YOUNG PEOPLE AT THE BRAZILAN EMBASSY
Next I attended the very opulent Brazilian embassy on the strand where youth organisations Livity and Somewhere_to were holding their Christmas party and screening a short film directed by Adam Deacon. Adam had chosen some winners from a competition for Somewhere_to, to direct a video in Rio, Brazil for the group. The evening highlighted that as well as carnival dancers, lovely vibes and of course loads of lush nibbles and plonk. 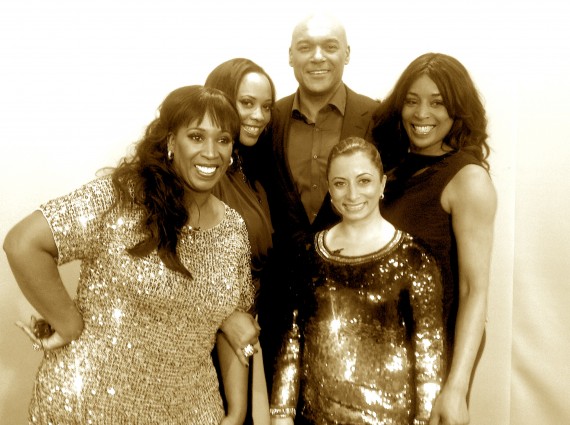 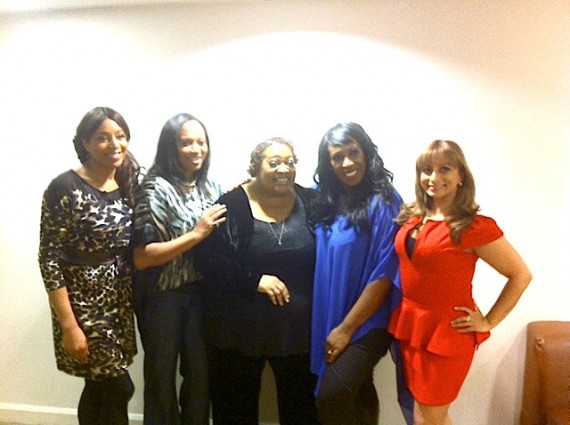 JASMINE WITH THE LADIES TALK TEAM AND SOUL LEGEND JOCELYN BROWN.
Midweek it was off to the Battersea studios to record our weekly show for LADIES TALK (SKY 218) where this week we had the acting legend Colin Salmon and soul legend Jocelyn Brown (somebody else’s guy) join us on the panel. Both were hilarious fun for the Christmas special and revealed some great anecdotes! Make sure you catch it. 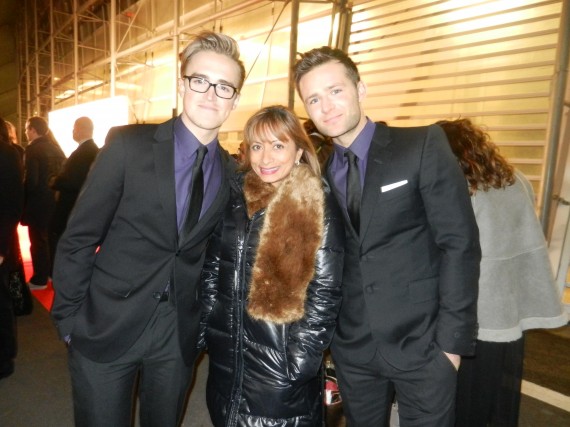 JASMINE WITH A COUPLE OF THE MCFLY BOYS ON THE RED CARPET AT THE SOLA AWARDS-02 ARENA
Then it was off to the 02 Arena in Greenwich for this years Spirit of London Awards which is one of my favourite events of the year. Last years was held at the Royal Albert Hall and was an amazing evening of celebrating young peoples amazing achievements in front of an audience of celebs from many walks of life. This year I felt the show lacked the spark of last years. The 02 was too large a venue and not all seats were sold. It felt flatter than previous shows even though they had a brilliant all star line up. As well as that, this year the young winners weren’t allowed to make an acceptance speech due to time constraints, which was a pity as it lacked the ‘ahhh’ factor that last years ceremony had. we wanted to hear from the kids-that’s the main focus right!?
Having said that, the night was still lots of fun with a cold, yet busy outdoor red carpet where we caught up with presenters like Noisettes and Olympian Zoe Smith, as well as performers like Angel, Labyinth and McFly. (Special shout out to Zoe and McFly who spent ages waiting on the freezing red carpet with the LONDON360 team to feed to a live BBC broadcast- true professionals!) During the show we heard wonderful, many unbelievable stories about the young people across the country doing amazing things for their communities as well as mind blowing personal achievements. an evening that left us secure in the knowledge that contrary to belief the youth of the UK are great and doing things that we should all be really very proud of! 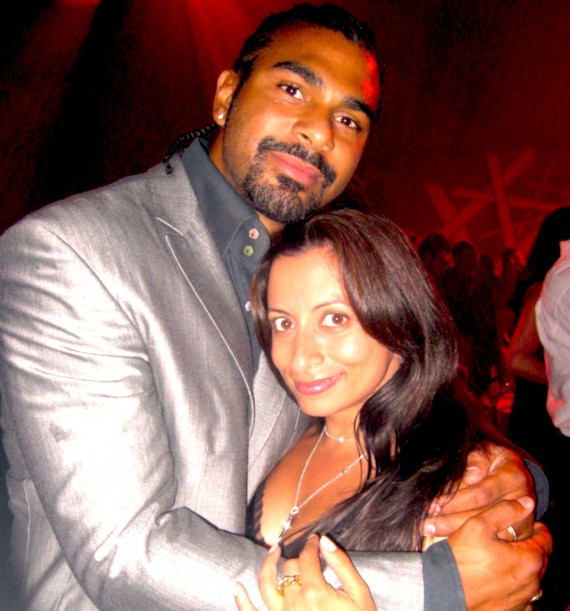 JASMINE WITH BOXER DAVID HAYE
Other people that I want to commend from the scene that have really made their mark this year despite obstacles are boxer David Haye, east London duo Rudimental and west London’s Rita Ora.
David had some controversy over the Derek Chisora drama but made it back into everyone’s hearts by showing just what a lovely guy he is on I’m a Celebrity. I know he will achieve his ambition of making it in the acting world too- he’s a grafter. 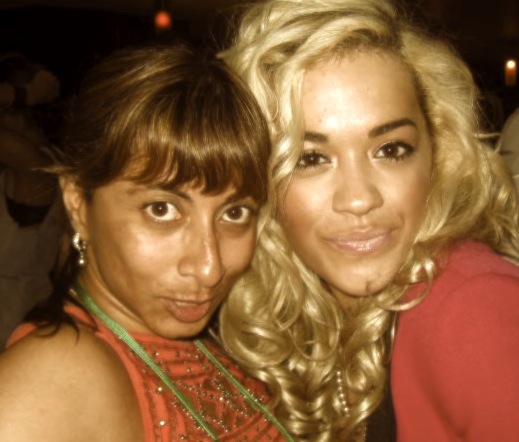 JASMINE WITH 2012’S BIGGEST LONDON SUCCESS STORY-MS RITA ORA!
Rita Ora needs a special salute. I remember her grafting all the way back in 2007 many years ago when she duetted with Craig David on the single ‘’Where’s your love’’. Since then she’s had her ups and downs. She managed to get Jay Z to sign her to the Roc, and believe you me; life on a label that big is not easy. Competing with stable mates like Rihanna and dealing with press intrusion at the level at which she did this past month with the Rob Kardashian drama takes balls. She has remained sophisticated and quiet on the controversy front and I really believe that she’s put West London on the map in a great way! She really is really one to watch for 2013 alongside east London duo Rudimental.
They currently have a track which features Angel Haze called Hell Could Freeze. Their Feel The Love is a monster SMASH anthem, certified platinum in the UK and is one of the biggest selling records of 2012. The track is also platinum in New Zealand and Australia. I think the number 1 they already have under their belt is testament to the fact that things can only get bigger for them in 2013…. they even squeeze in time to mentor young people…now that’s good karma.
I hope you’ve all balanced out your good karma for the year, its never too late. Apologize to someone if you need to, remind someone else that you love him or her. Invite in a lonely person for a hot drink. Happy holidays to you all! Tomorrow is never guaranteed so live life hard!