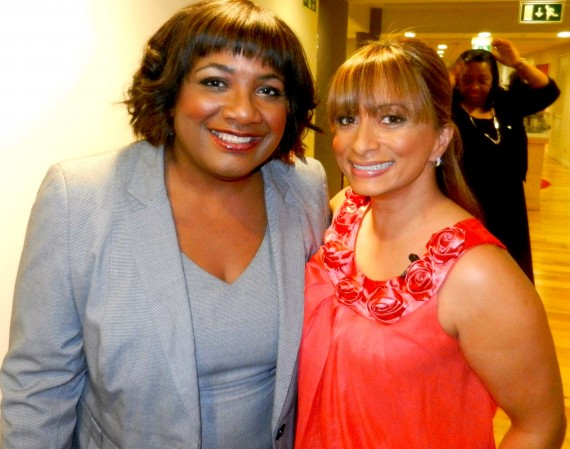 JASMINE WITH MP DIANE ABBOTT!
Started the week at the sold out Rudimental gig at Hackneys Chats Palace. The Venue is a beautiful old Victorian churchy looking building which was full of a really young crowd of fans gagging to see their hero’s-the duo that are Rudimental.
Rudimental’s band and vocalists were really on point, particular salute to the red haired female vocalist, who was feeling it and letting out some passionate tones.The band had so much energy onstage that the crowd couldn’t help bouncing up and down all night too.This band is SO good when in a full live show. That’s what people should see otherwise folk have them down as a drum n bass outfit when they are more of a band, more musical than that. They all play instruments and they are at the core of this ‘thing’ which includes session singers, vocalists, trumpeters, drummers etc etc. definitely a great act to see if you want to dance hard and leave the venue having taken part in a very energetic interactive gig! 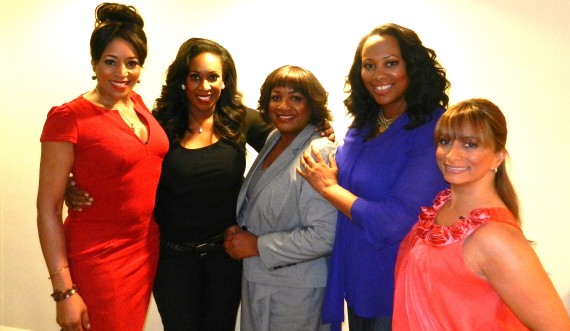 JASMINE WITH THE LADIES TALK TV CAST AND MP DIANE ABBOTT!
Next it was time to record the Ladies Talk weekly TV panel show (SKY 218), which has been swimming with celebs this fortnight! On last weeks show we had actor David Harwood MBE on and this week its Colin Salmon! My recent favourite has got to be MP Diane Abbott though-she was SO ENTERTAINING and real!
Diane is the first black woman to be elected to the House of Commons. In 2010, she became Shadow Public Health Minister after unsuccessfully standing for election as leader of the Labour Party. That’s how big her balls are-she stood for leader of the labour party!
I have to confess I wasn’t that bothered either way when I first heard she was our guest a few weeks back. I’ve seen her on various TV shows over the years. Thought she didn’t really engage with me and was like most politicians a little out of touch.
Could I have been more wrong!? On the show she was dynamic, intriguing and hilarious with her fast wit and anecdotes and kept it very real when discussing her personal life, controversy in her 25 years career and more. She certainly proof of the black doesn’t crack theory; she’s 59 yet still looks 40 at the most! she dropped a few patois slanguage phrases into the interview as well as sharp funny responses to questions and was really very intriguing as a person. Can you imagine the struggles she’s had to go through to get this far? And she’s probably revealed none of the real controversy to date. Surely there’s a great book waiting to be written here? 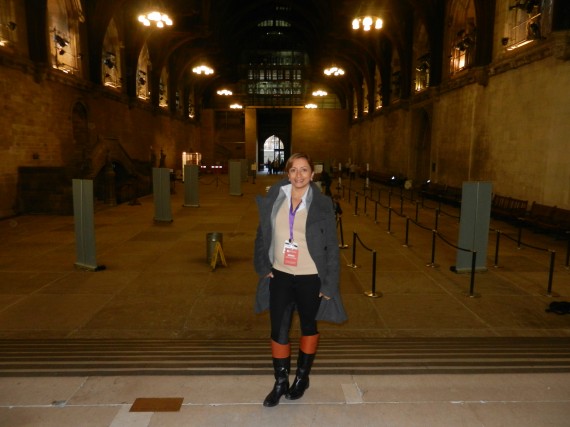 JASMINE PREPARES FOR THE UK YOUTH PARLIAMENT IN THE HOUSE OF COMMONS GREAT HALL.
From one generation of politicians to another I then popped my formal attire on to brave the cold corridors of Parliament and the House of Commons where I accompanied the LONDON360 reporters and young people from all across the UK gathered for the UK Youth Parliament annual meeting.
Youth from all across the country had voted on 5 areas that they think are most important for their parliament to focus on for the next year. This day in the chambers was for all to debate for and against each motion and choose a winning campaign that would be the focused on priority for all youth in the near future.
The 5 topics which had been voted in were; Make public transport cheaper, better and accessible for all’, ‘Getting ready for work’, ‘Marriage for all’, ‘An equal national minimum wage for all’, and ‘A curriculum to prepare us for life’.
The day began in the great hall where teas, coffees and pastries were provided. I don’t know why but of all of us picking pastries the waiter leans over to me and says loudly ‘’its only one each ma’am!’’ 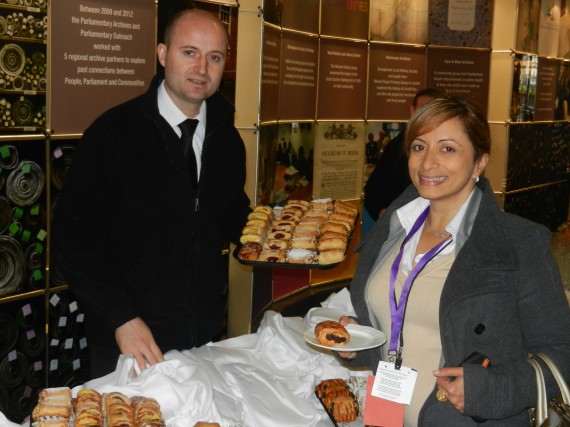 JASMINE IS WARNED ITS ”ONLY ONE PASTRY EACH!”
It was fascinating to see so many young, politically engaged, ridiculously articulate people gathered eager to take on the days topics and I noted that these youth would be running our country one day. The biggest thing that impressed me was that unlike generations ago where politicians were of a certain sex, class and background-usually male, white and Oxbridge educated, this gathering had youth from absolutely every possible background regardless of sex, class and background and it was refreshing!
I spoke to a young lady representing Essex- she looked Essex-but was also a carer for her mother so all political decisions affected her.

Once breakfast was over we all made our way from the Great Hall to the Chambers.Along the very tiny narrow steep staircases and I inwardly scoffed ‘’surely the adult fat pouch MP’s can’t get through these daily?’’
Every young person had made the greatest effort to look smart and appropriate in their surroundings …and then I spotted her. A single female that had assumed wearing nothing on her legs would be a good idea. I also spotted another girl in high wedge raving heels-come on ladies! 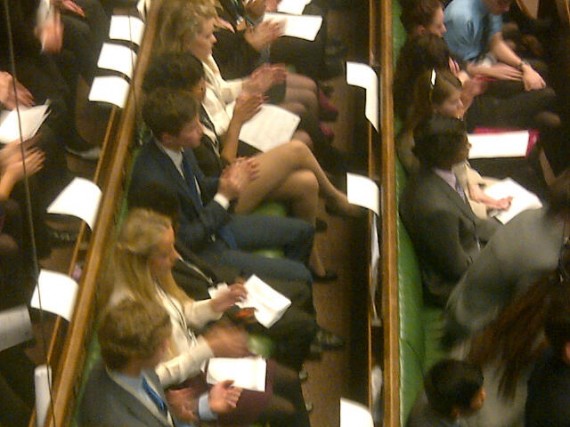 CAN YOU SEE MISSY WITH ALL HER LEGS OUT?
The Principal doorkeeper of the House of Commons hosted and introduced us all and then the actual speaker of the HOC the Rt Hon John Bercow MP welcomed us and directed us on the running order of the day. Other adults present and supportive were Rt Hon Andrew Lansley MP and the Shadow Leader of the House, Angela Eagle MP.
The speaker said ‘what a joy it is to preside over such a calm and orderly chamber for the 4th annual UKYP!. I welcome you to this, our chamber, and hope your day is a success, look and remember the day you spoke and sat at the British hoc. We meet in a free society to debate what others globally cannot. One day the torch will pass from my hand to yours. Nurture it and protect it and pass it down to those that come after you. Before speaking stand and indicate your desire to speak, pause, say your name and the region you represent before beginning. Make your arguments succinctly; don’t interrupt your own speech as an MP this year did with his musical tie so please ensure your gadgets are all on silent. And thank you for being interested in your society- I always say ‘’If YOU don’t DO politics, then you have it done to you’! 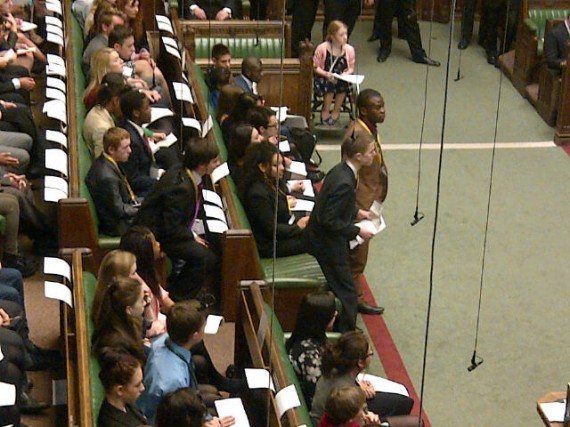 THE LONDON UKYP MEMBERS ALL EAGER TO GET A CHANCE TO SPEAK.
Then a Message from the Prime Minister was read before the debates began.
Callum Crosier from North England,Northumberland introduced the Public Transport debate. He had clearly taken tips from Obama as his style of speech included repetitive phrasing at regular intervals “no no no”. He ended strongly with ‘’Divided we are weak, one nation, one notion, one campaign-better public transport”
Then from the East of England Amish Brown pleaded with us not to vote for public transport again ‘‘we haven’t achieved our goal this year. Let’s not vote again for this to be our most important campaign again this year. London already has discounts for youth public transport and there’s a national rail card”
The final speaker in conclusion for 1st debate summarized the motion in a very dynamic comical manner-remember him for the future-his name is Matthew Wilson.
The 2nd debate was about ‘Getting youth ready for work’ and covered areas like work experience, equal minimum national wage for everyone. There were a numerous that stood to speak with clear, confident voices and it was touching to see that whilst their vocals didn’t let them down, if you looked closely their hands were trembling! (After all this was also being aired live on the BBC’s Parliament channel too-no pressure!)
My assistant Rosa nudged me and whispered ‘”My belly pot feels sooo warm. I’m in awe. AND IM NEVER IN AWE. Brave confident and beautifully eloquent!’’ 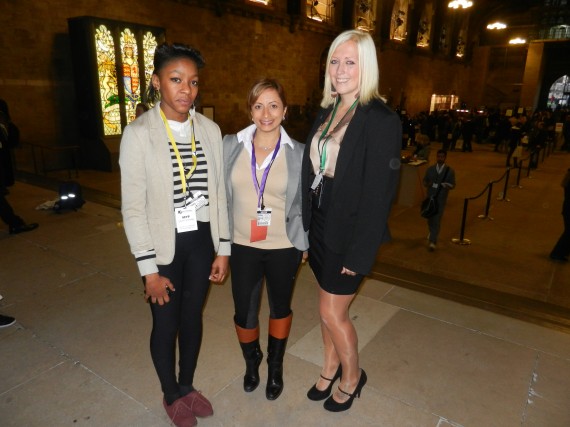 JASMINE WITH UKYP MEMBERS Chante Joseph FROM BRENT AND MICHAELLA PHILPOT FROM ESSEX.
The 3rd debate was Marriage for all led by Essex’s very own Michaella Philpot who looked beautifully groomed with full blonde head of hair and tan and really fought vocally for this motion. She had a little resistance from other youth who retorted ‘’it’s a Great motion but will the UK’s youth think this is a priority for their generation?
The male speaking against her motion added “Mr Speaker, as a person who’s not yet had my 1st proper snog yet- I’m not sure this is as much a priority as transport and work exp. I’d rather be well informed and travelled than well married- especially considering the annual number of married couples is at its lowest ever. We should focus on reducing the UKs high divorce rate. Love is love regardless of marital status”
Someone arguerd back “in a few years we’ll all be over 18 and married!” (my assistant Rosa, sharp as ever leaned over to me again and whispered ‘’that’s optimistic! Good luck with that lol!)
After lunch we had the final 2 debates, which were a ‘’minimum national wage for youth’’ where a very classy looking young black female Amaka Uchegbu- protested for the motion… 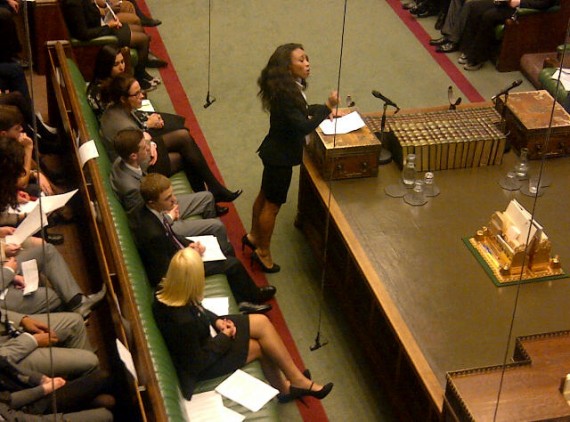 THE VERY BEAUTIFUL AND ARTICULATE UKYP MEMBER AMAKA UCHEGBU
‘‘The wage is so low its a disincentive for young people to work! It also discriminates against people from a lower socio economic background’’. ‘Will we look back and feel disgusted at the lower minimum wage for the young as we did for the slights against slaves and suffragettes?’ argued another young lady.

In the end it was the 5th debate that won as next years youth campaign and it was led by Sumaiya Karim for a ‘curriculum for life education’. This was a clear winner from my point of view as all youth should have lessons in how to run their financial affairs, sex education, mortgages, and much more.
I was a bit miffed that the adult members of parliament hadn’t all been made to sit and watch all these debates so they could see what’s important to young people and that how articulate they can be. only Simon Hughes MP and a few others popped in and out. Very poor.
So many youth stood out during the day including Chante Joseph from Brent who was an eloquent speaker and a passionate character full of personality who summed up the reason this motion was the right winner as she told the whole of the Commons about her ‘’”Dad who now works for spring studios with acts like Beyonce and Coldplay but always wishes he had life skills lessons as for years he didn’t understand so much of what he needed in society’’
LONDON360 reporter Eliot Goward had the young people queuing enthusiastically to speak to him on camera about how amazing and empowering their day had been and once again I mused ‘’young people , don’t let the media pigeonhole all of you as being unruly rioting layabouts- so many of you are world leaders!-the futures bright!’’