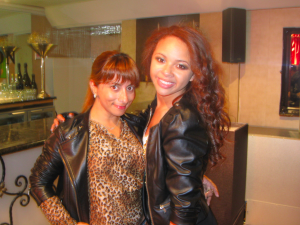 For the past couple of years Jay Z’s latest record label RocNation has generated much excitement by signing up new acts including London’s very own Rita Ora who shot her video just this past fortnight and no doubt will be a name to be reckoned with very soon.
But before that a 17 year old young lady named Alexis Jordan has had the music scene excited in recent months with her very cute, extremely young looks and undeniable vocal talent. Like a RocNation version of Britney Spears but with class, Alexis is bubbly, petite and confident beyond her years.
Her showcase in London on the same night as a Mobo Awards launch party had the industry torn as which to attend and many ensured they made both.
Her label head Jay Z swears by her superstar qualities, and his wifey miss Beyonce complimented her on her cover of ‘Halo’. How much more star co-signing is needed. Clearly this isn’t the rule and there are exceptions. After all who recalls the massive who-ha when the Princess of the Roc Tierra Marie was catapulted onto the scene? Except she never really was. Simultaneously a newcomer called Rihanna also put out a couple of singles on the same label but without the fanfare that was afforded Tierra Marie. A few years on Rihanna is a bonifide a list celeb snapped around the globe and who knows what happened to Tierra?
Anyhoo-I digress- Alexis Jordan looks like she has all the ingredients for a successful music career in place. Her showcase was packed and had smooth touches like ROCNATION drinks menus and branding.. She looked amazing, she sounded even better sining her single ”happiness’ and she has youth clearly on her side. seemingly like a true lady she also refuses to cuss which i find endearing in the current overpopulated ocean of female celebs that like to outrage with filthy mouths. At the showcase location Studio Valbonne, Alexis told me (whilst she was being fitted into a sexy black basque) that she loves TopShop , has never heard of Primark, is not allowed any boyfriends but saw a picture of Chipmunk and thinks he’s cute and apparently wanted to call him up! (Hope Jigga doesn’t read this!- Chipmunk might become Chipmunk meat!)

In other news, its 2 weeks until the Mobo Awards, have you voted and bought your tickets yet? I voted this week. It was very difficult as there are so many acts I like to champion and support- so I sneakily had my mates vote for my other choices so as not to sleep at night with the music equivalent of ‘’favourite child- parent guilt’’. Mobo Awards founder Kanya King has been working 24-7 this month in preparation and so when she needed a breather and invited me to MP Oona Kings soiree to celebrate her running for labour candidate for London mayor I went along. The night was at a posh pizzeria in the city where a sound system was playing wicked old skool tracks, ladies in white outfits were walking around in Oona-ettes looks and other tastemakers like actor Kwame Kwei-Armah were in the house showing their support. As usual Kwame made a very articulate, touching speech about Oona’s achievements.  Oona looked very elegant in a black frock and higher than high vertiginous heels and the evening was a quiet celebration of someone in our community doing extremely well. Oona took the mic and thanked her guests for their support and we all wished her well. Even though she didn’t win her nomination in the end the fact that she stood up to be counted and continues to be a positive role model in media and politics and spans many industries is a testament to her work ethic and reputation.

Finally lets play guess who?. Guess which international celebrity this week in London ordered over £500 of Nando’s for their team and when the order turned up all wrong had the most disappointed look on their face ever. Nandos really is the food for the modern hip hop generation!.
Guess which male and which female from the UK urban scene has just been dropped by their respective record labels? Can the dream be over?
Guess who the feisty act is that is hosting backstage at the MOBO AWARDS this month? Will they behave? Guess which mangers of 2 superstar uk acts are fighting behind the scenes as their young groups also have a public beef? Finally, guess who had to do a live audition onstage in front of a whole TV crew to see if they were good enough to sing on a national music TV show this week? Luckily they passed with flying colours!