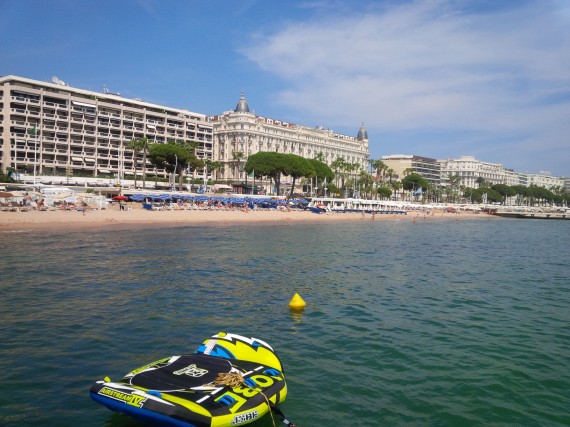 I needed a short trip away, with lots of hot sunshine, sea, sand, and fabulosity. Searching the usual travel sites like Expedia and lastmin.com I finally settled on Cannes. I’ve only ever frequently Cannes for MTV Movie work so usually fly in, hotel, shoot, party, no sleep, start all over again schedule for a few days, before returning to London like a flogged horse. 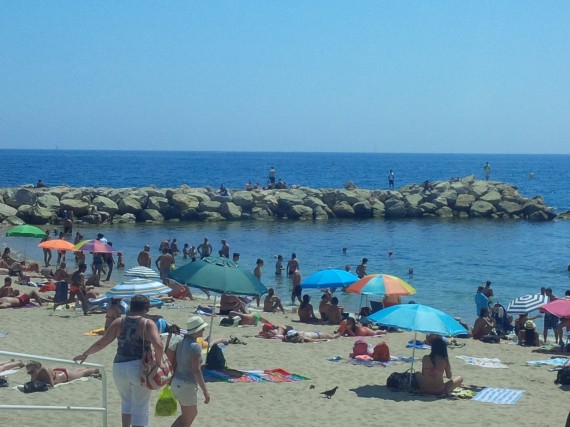 This time I vowed to do it in style. I was taking my mum and so a self-catering apartment or ‘economical hotel’ a little out of the way wasn’t an option for her 80-year-old legs and temperament. I decided only the best was good enough for the woman who had given me birth. So I didn’t look at the price and booked the infamous Carlton slap bang in the middle of the most famous film festival strip in the world, on what turned out to be a pretty good deal all things considered. The Carlton is the Palace to the stars and is the star of all the hotel palaces on offer. Every film legend you can name has stayed there as well as Princess Diana, Grace Kelly, Sharon Stone, Puff Daddy, Ronaldo and more. If only those walls could talk!

The Croisette is the beachfront strip of 3km of curve of the Cannes bay, lined with palms, hotels, designer boutiques, ocean liners and yachts. Day and night it’s the spot to see and be seen. The Carlton breakfast terrace is the best terrace on the whole of the Riviera, to watch the ocean and passers by stroll along the infamous fashion catwalk, otherwise known as the Croisette. 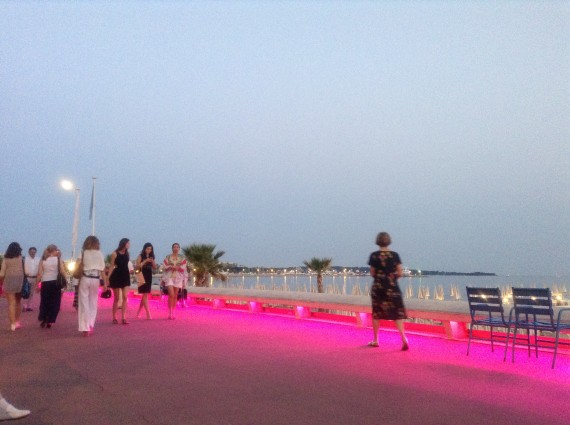 ‎We only spent a week there but these were the ten things we were really struck by;
‎
The great thing is, that they looked great and were clearly as confident in their old age as in their youth – if not more. They were rocking wedge shoes, mini skirts, and strappy string vests. Je n’en crois pas mes yeux ! Initially it was a shock for my very British fashion-brainwashed brain to accept, but after a day or two I got it. You name the trend, these oldies were on it. Nothing was too much. Cannes old lady fashion is incredible. There are no ‘‘dressing for your age’’ rules out here. Wrinkles, veins and more are like life scars that no one bats an eyelid at. These oldies are strutting with sass and confidence.

2. Speaking of wedge shoes, this is THE footwear for all females strolling along around Cannes.

These women have pretty feet that won’t be ruined by trying that very British awkward stagger in really vertiginous heels. French femmes are lean and strong, built like racehorses and I’m convinced it’s their wedge shoe walking diet.

3. Another reason they may be lean and skinny is that French ladies smoke. A lot. All the skinny model-looking chic’s that were wearing shorts, vests and attitude usually had a fag hanging off their lips 24-7. Even whilst riding their mopeds. Especially whilst riding their mopeds. I’d love to see the French medical stats of smoking related illnesses.

4. Speaking of health, the French love to tan. In fact, in the same way that the rain in Spain falls mainly on the plain, the tan in Cannes looks incredible on man or woman. 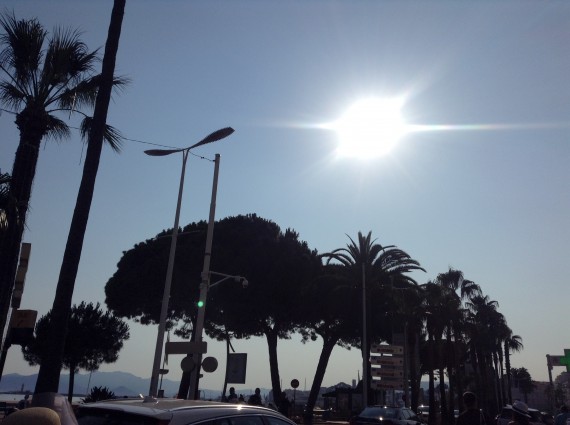 The sun is high in the sky and burning hot from 8am until well after 9pm, and on not one occasion did I spot anyone on their beaches using sun cream! This could be why most of the white folk I observed out there had tanned so dark they resembled someone wearing blackface. The irony of a country that is stereotyped as being racist but they’re craving to be dark.

5. Instead of spending my money flying to far off exotic destinations its much more economical to get a cheap flight to Cannes (Nice airport), and spend the rest of your money on a great hotel or activities.
Also, once you get to Cannes, there’s loads of free stuff to do. Day and night the Croisette is like a live, free fashion catwalk with lovers walkers, rollerbladers, scooter flippers, cyclists and more doing their thing. 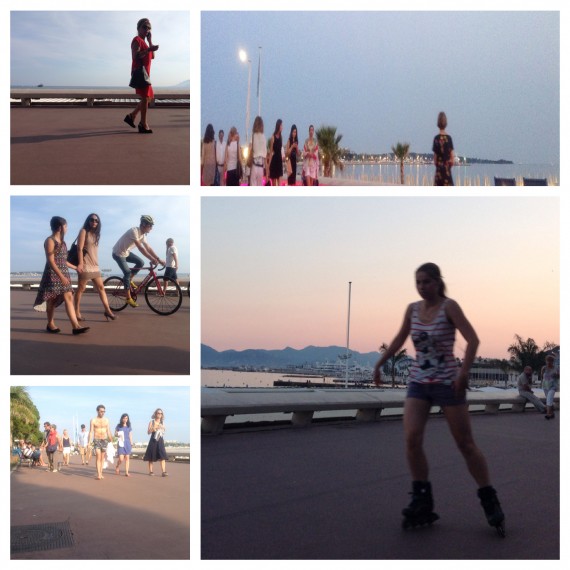 Also there is so much free art by the likes of Salvador Dali and Matisse just placed outside buildings for you to take in.

All the tourist spots where the famous Cannes film festival takes place are access-all-areas so you too can pose on the same spot as your favourite film icon or place your hands in their handprint walk of fame! 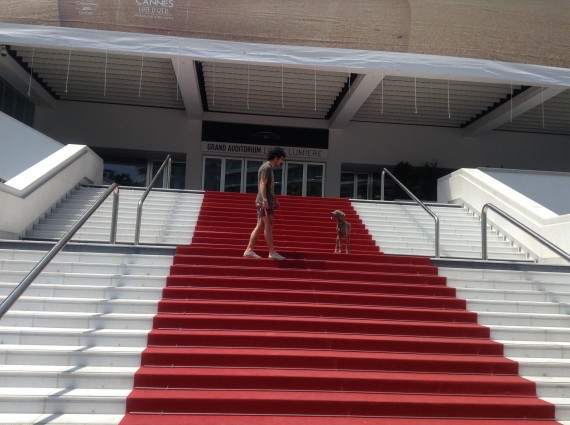 6. Unlike most popular cities there are no tour buses in Cannes. Instead they have a very cute, olde worlde ‘’Petit train’’ that will take you on tours through the old town and cinema locations for €10 an hour. 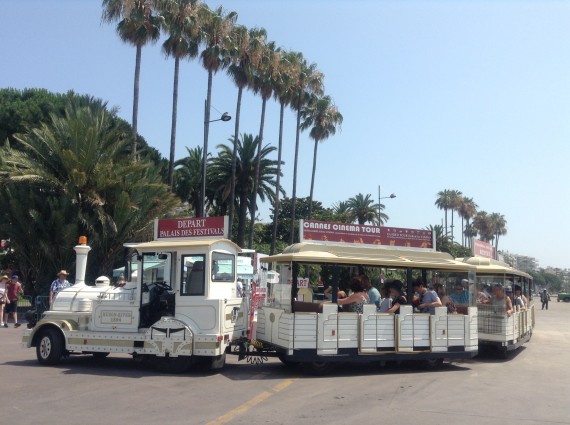 The Cannes city street layout is like New York pretty easy to get to grips with. Its not a grid system as such but the roads are laid out in distinct shopping, eating and business districts so very easy to familiarize yourself with in a day.

7. Unlike all the tacky tourist beaches across the world where you’re hassled to buy pineapple or braid your hair, Cannes beaches are on a whole different level of opulence. 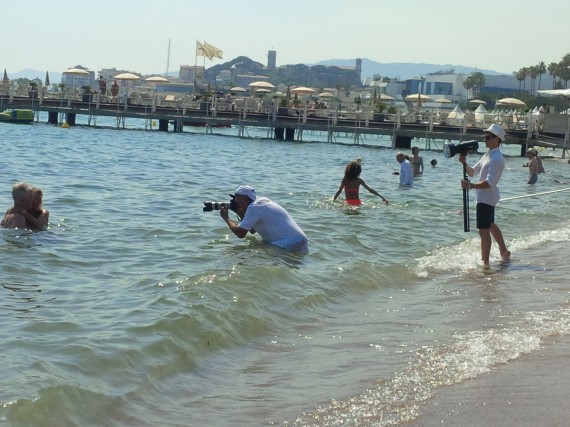 Here a photographer accompanied by his assistant holding a giant beauty light and tripod will do a full on glamour shoot for you in the ocean. Awkwardly they’ll do it without asking your permission then try and sell you ‘’ze lovely picture’’ of you looking like a bright red beached whale. Non-merci ami. 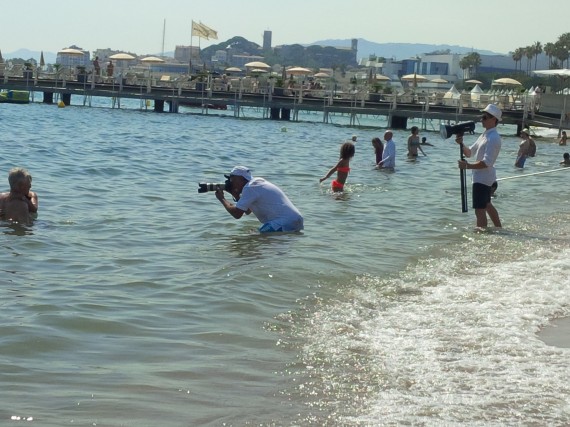 Also lithe, tanned young ladies carrying bags of sexy bikinis and lace beachwear will plop themselves down in front of you and change into every garment in their bags and parade up and down like a fashion show trying to tempt you into buying their wears. Of course I succumbed, but then wondered why the sexy black bikini I purchased didn’t make me look like the same sizzling siren I had brought it from.

8. The beaches are a point of contention but needn’t be. Basically on the main strip, each section of beach is owned by the hotel it sits opposite. You have to pay to sit on this beach EVEN if you are a paying hotel guest. 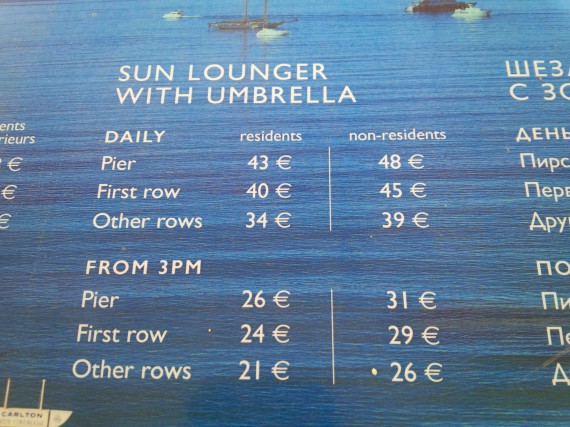 The Carlton charges most for its pier, then its front row on the sand and also half days. 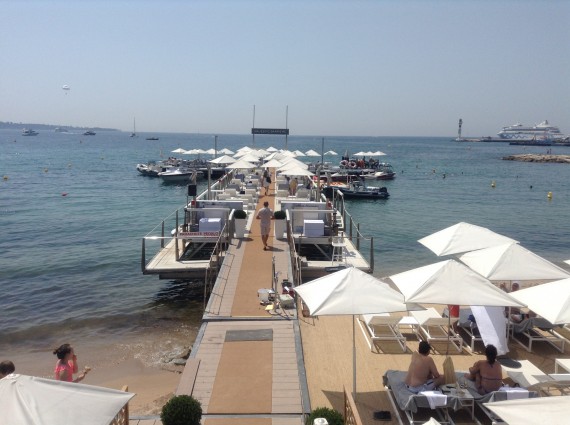 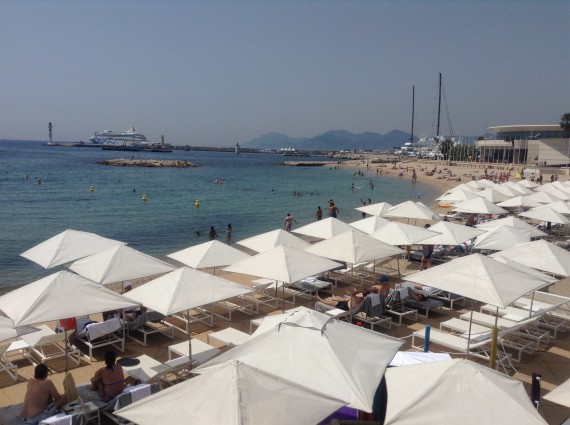 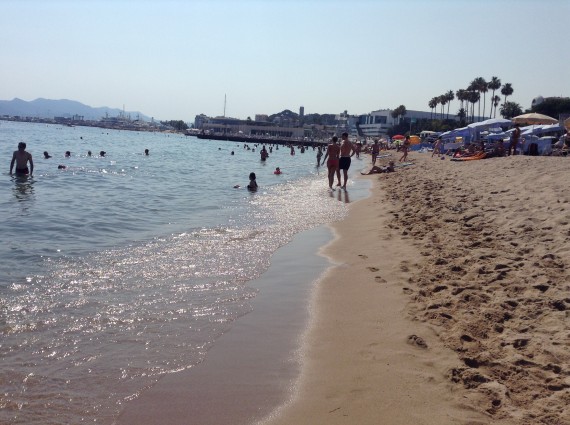 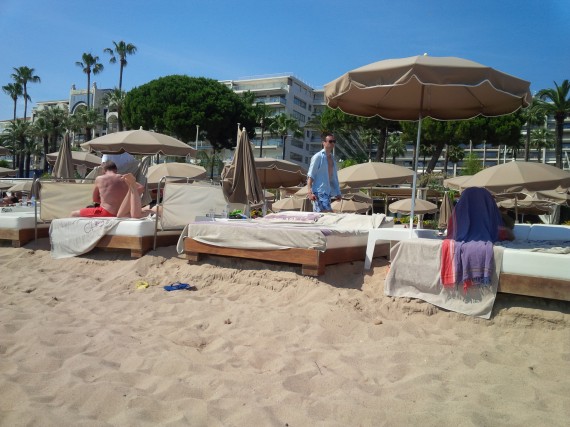 You can even buy a real bed on the beach to show how fabulous and wealthy you are and that you just throw yor money away!Laisse tomber… 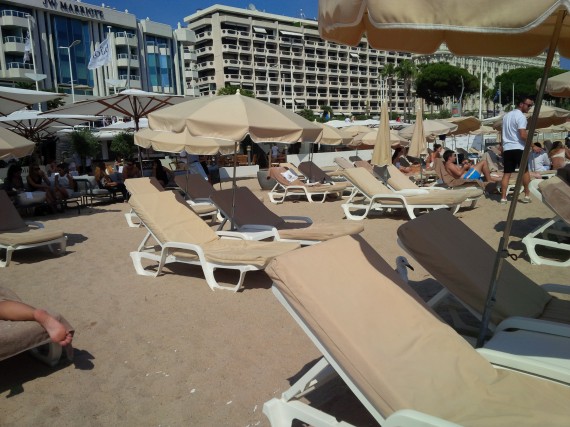 Its outrageous, but just a few meters down the Croisette are totally free public beaches, which are exactly the same but without the snobby folk, attitude and cost. And much better for people watching.

9. The 5 star hotels are expensive. But for the cash that you’re saving on flights its well worth it. From the beautiful rooms with small touches like beautifully made beds and top quality bedding, to great branded beauty products in the bathroom, a retractable, discreet washing line in the bathroom, a free daily newspaper and all your needs met. Their breakfast may be around £30 per person, per day, but it’s a kings feast buffet with full English breakfast, a pastry bar, antipasti bar, nespresso and champagne on tap. 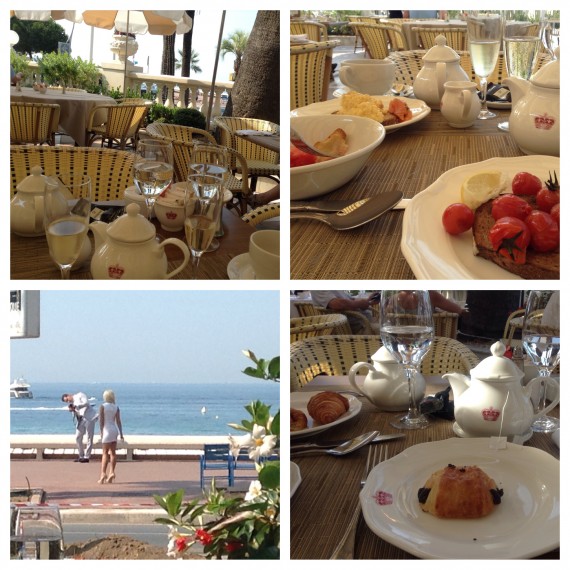 YOU CAN EVEN WATCH COUPLES TAKING MILLIONS OF PHOTOS FOR HOURS WHILST EATING BREKKY!.

We made sure to make the most of this and lined our stomachs well so that lunch wasn’t needed. I even spotted other guests sneaking fruit, pastries and more into their handbags. I felt a euphoric high on paying €10 for a pot of tea with silk tea bags and €20 for a sliced watermelon presented on a silver platter. I did snigger in disgust at myself as I stroked the silk tea bag that I steeped my daily pot of tea with. 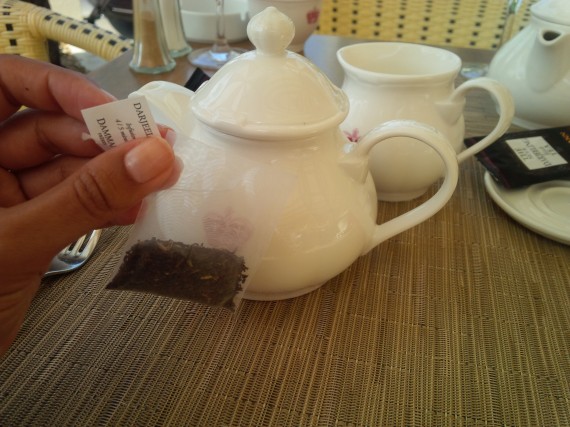 10. One of the best things about Cannes is wherever you are at any time of the day you can take a seat. There are seats in public everywhere. 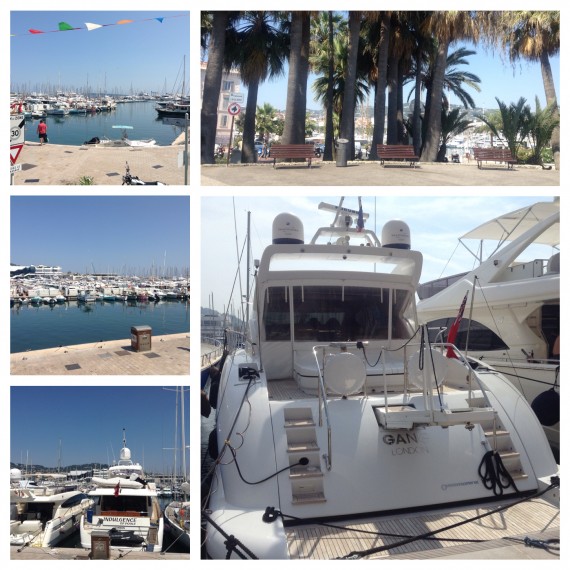 All along the Croisette are metal bright blue seats that can be moved into pairs or groups depending on the size of your group.

You can place them facing the sea or inwards facing the twinkling palm trees on the road and watch the pink lit up street all night. 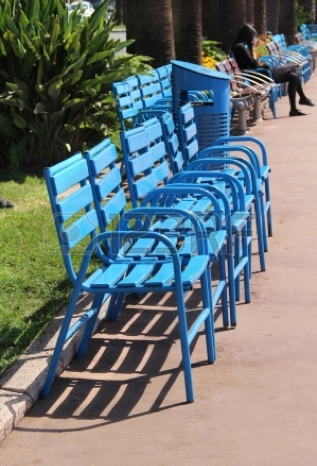 How quaint! In the UK I guarantee these would be nicked and sold for scrap metal. ‎Even on the high street full of shops, there are seats everywhere attached to the bottom of lampposts. It’s these little touches that make life so much more sociable and easy on the Riviera. Ça vous dit?