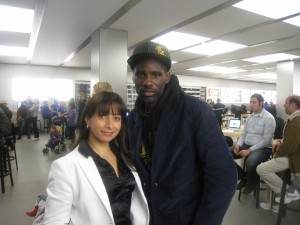 Unity and ambition in groups of circles plays a huge part in success and this example keeps popping up in every story I encounter. A young man that I kept hearing about years ago that young people really respected musically is an artist named Wretch32. My interns, researchers, work experience and more would bring his name up continually. I met him a few times before he became popular and he was always the most well-mannered, friendly, engaging person. Everyone liked him. He is on the register for ‘’next to blow up’. Check him out. From North London like his homeboy Chipmunk, Wretch smiled as he recalled to me that his Dad was a sound system DJ so they had speaker boxes all over the house and in Wretch’s bedroom. His Dad also took him to jams which he laughs were maybe not appropriate but Wretch was sucking it all in. Wretch has been really close to Chipmunk for years as both are North Londoners and always kept in touch, played each other tracks and kept each other on their toes. As well as Chippy, Wretch is close to acts Scorcher, Ghetto and Bashy and loves following Scorcher and Skepta on Twitter as both are mad funny, but does see the downside of the social networking site when he observes cyber wars between artists. He maturely understands that the advantages to Twitter are fan and public interaction but acknowledges that its negative side is that you put out immediately the first thing that comes into your head and press send.
He described his early days getting into the game and explained that it ‘’ was more difficult to get into the game as acts like Wiley, Roll Deep, Nasty Crew, and others were all from London’s East End and all the pirate radio stations there were controlling the sounds of the time’’. Wretch’s first mixtape “Learn from my mixtape” caught peoples ears and Radio1Xtras DJ Cameo , Ace & Vis and Semtex were suitably impressed.
Wretch continues ‘’Combination Camp were on HeatFM and encouraged me to get on the mic’’. ‘’I continued writing and improved and got onto Pirate radio’’.
The quality of lyrics and concepts on Wretchs mix tapes caught peoples ears with his mad concepts. For example he did a track called “Punctuation” where he went all metaphorical with the English language and people were impressed!. After that he did a lot of school tours and talks with primary schools, which he found easy as ‘’kids nowadays respect artists more than their teachers’’.
Soon after putting in all that hard graft Wretch started getting a lot more airplay and became Radio1Xtras most played mixtape artist in 2006.
He then sat down with his team of friends…his mate is his manager and like many an urban act, Wretch thinks its easier to keep his business in the fam and ‘’not listen to other managers cos a lot of them just talk’’. They boast “We will make you big and it all amounts to nothing”.
Currently working on his new album “Black and White” which is a quarter done with a single coming soon, Wretch has been chased by Radio1Xtra bigwigs to host his own show and is juggling being a good dad to his young son. The album concept differs from his past work on “Wretchrospective” but he reassures me ‘’its still intimate with a good vibe. In the past I may have been too conceptual’’. The new work includes tracks that talk about love-but not too much and generally the roller coaster of life and being in the industry. The one thing I love about Wretch is that he never talks too reckless-he understands the power of the irresponsible word.
Smiling with love he recounts to me that his young son means everything to him and tells him that when he grows up wants to ‘’be a screwdriver” LOLOL‘’. Look out for Wretch32. An articulate lyricist, a responsible father and a decent human being. That’s all!.

I want to also shout loud and proud about a young man called Jason Lewis who 3 years ago was working in clothing store Banana Republic and sent me a YouTube link to a parody of MTV BASE Black History Month and asked me to check it. Assuming I’d be annoyed by this young, whippersnapper nobody’s content I clicked through on my computer and watched with one eyebrow raised. I got it immediately. My team weren’t convinced but I could see his thought process and comedy angle were unique and what our audience would appreciate. I brought him into MTV to work with our team and the legal department to ensure we could deliver a workable script to film for the upcoming BLACK HISTORY MONTH. My bosses had already warned me that with resources being cut everywhere Black History Month plans weren’t concrete. However, Jason offered to make ours. With his own team of friends in his talented circle. between them Jason had a huge group of actors, directors, editors ,this kid was placing himself in successful circles and they were all pulling each other up together! To me it was mind blowing! To cut a long story short, Jason spent long, frustrating hours with myself and our legal advisor working on his scripts and making him understand the meaning of ‘slander’ and ‘libel’ before getting his own, basic 30 min show on MTV BASE called THE JASON LEWIS EXPERIENCE. Kudos to my boss at the time-Virginia Monaghan – for letting me persuade her on so many projects that I was passionate that should make it to air. Even though Jason’s work wasn’t at the time of the highest quality we were used to putting on air, Virginia saw the light, supported me and allowed me to bring in some very talented young people to the channel. Next, my pal that works at the BBC requested the DVD of Jason’s work and before you could say boo, Jason was called into the hallowed walls of the BBC building where for the last year has been working hard to make it. He’s had a few cameos in BBC comedy output and then last week a press release by the corporation was released confirming that they were shooting a pilot for Jason own show ‘THE JASON LEWIS EXPERIENCE’!. A beautiful story of a young ambitious, talented man that learnt to play by the establishments rules and slowly bent them into his own shape –congratulations Jason-I salute you!

Another similar story is that of Alexander Amosu. Years ago when I was working as a CHOICEFM presenter and covering the Ideal Home Exhibition at Earls Court a young man introduced himself to me and mentioned that he was selling ‘’R&B ringtones’’ as mobile phones were now popular with kids. I took his card, wished him well and moved on. Gradually I’d hear his name regularly as he climbed the ladder of success. He had built his company from the ground up and sold it for millions. Next he concentrated on the luxury market and became known for producing and selling high end designer things like a diamond encrusted IPod or phone, the most expensive suit in the world etc. He knew how to spin the current trends and now he is an established, respected business man. He held his birthday party a fortnight ago and as you arrived at the venue the first two things I spotted were a brand new white Audi R8 spider and a red Ferrari California! To complete the opulent entrance we were gifted a red rose branded with an Alexander Amosu logo whilst we sipped on champagne. Very indulgent but hey-the mans worked hard and has the right to celebrate his success on his special day. As we wandered around the room we noted on display ‘’that’’ world’s most expensive suit costing £70,000 and four show cases of diamond encrusted phones. Guest also had the chance to get their phones engraved with their names or logo for free as well as try out Mr Amosu’s new line of pin striped suits laced with your name, a revolutionary idea that’s bound to have numerous fans among the vain footballers or rappers worlds. You could smell the money in the room as guests filled the venue to capacity with paparazzi taking photos and a two camera crew following and filming Mr Amosu’s every move. (very damon dash LOL). The event kicked off with a video tape that showed Alexander’s journey to the top followed by a grand entrance with him coming through a secret door with African dancers and drummers! Soul singing legend Omar completed the fabulous evening by performing to guests that included Alesha Dixon, Clive Sharpe – chairman Golden Wonder Crisp, Chris Gorman – Chairman Quintessentially group, Micheal Birch – Founder of Bebo, Tinie Tempah, Duncan Bannatyne – Dragons den, David Pun – Director Harvey Nichols, Jim Ike – Nollywood Actor, Kanya King – mobo founder,, Emmanuel Jal, comedian Kojo. A very proud night for all present.