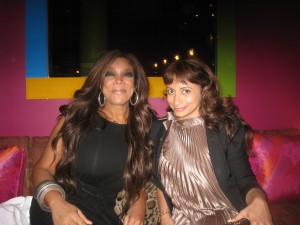 Years ago when I was outraging listeners on CHOICEFM with JASMINES JUICE scandal talk my hero was American controversial gossip DJ Wendy Williams. Whilst I merely talked about what was gwanin in the scene and revealing upfront news snippets, Wendy was causing catastrophic pandemonium by outing all the hip-hop stars news and private business. Many a star wanted to kill Wendy back in those days. But Wendy made her lane and graduated from there to get her own talk show. Now her TV show the Wendy Williams show is coming to the UK courtesy of BET who flew her to London to hang out with us for a minute.

The very fabulous Wendy who greets her audiences with her celebrated opening line “How you doin’?” joined an intimate audience of around 100 of us in the theatre screening room of the prestigious Soho hotel where we had a lovely evening getting to know Wendy over flutes of champagne and nibbles.
After a few introductory speeches by BET bods the lady herself stepped up and was I surprised. All these years of following her career and I never knew she was so BIG. Physically this lady is 6 foot in stocking feet and a big lady who’s boobs were ginormous! She revealed that she had been experiencing London and been enjoying fish & chips with enough malt vinegar, but was vexed cos there was no hot sauce. (A girl after my own heart-maybe its     all that hot bitterness that we like to eat that comes straight out again with all gossip queens!). She added that being in the UK was cool as she felt at home because of the British tabloids.

Wendy is Queen at talking and making you warm to her. Like me she reassured us all that reassured me that what she says is never meant to be nasty and that her show ‘’ is not a mean spirited show but that its always what we say in the back of our heads’’. Wendy spoke about the break down of her show informing us that it combines celebrity gossip, news events, relationship advice, as well as diverse mix of celebrity interviews from film, music, fashion, sports and television and carries a variety of interviews with old, young black, white folks, Hollywood stars, pop stars and real people.
As if she wasn’t glamazon enough, Wendy had on her skyscraper heels and she laughed chortling ‘’flats are only for working out or when your corns and bunions are flaring up, worrying! Things Wendy does worry about are her aging parents who are 77 and 79 , taxes, her kids, and the BP crisis. She revealed that her biggest struggle is raising a decent young boy to become a decent man and whilst she talks everyone else’s business, hers is not out of bounds.She let out that she knows pain and openly talks about her two 5 month old miscarriages. Wendy’s show debuts here in the UK on BET International (Sky Channel 191 and Freesat 140 on July 13.

South London’s finest Giggs text me a few weeks ago asking me to save the date for his ‘’invisible album launch party’’. By that I gathered he meant ‘keep it on the low cos every time I try and do anything publicly the police shut it down’ . So it took all my will power not to tweet or talk about it and whilst a few other music industry journalists had mentioned they weren’t attending as they didn’t want to get caught up in any madness, I wanted to support ,so gingerly made my way to ‘’the- ultra wanting-to-be-as-pretentious-as-the-New York-Bungalow 8-but isn’t’’’ Bungalow 8 club in St Martins Lane Hotel.
I felt smug as I was able to park practically outside the door. Until I stepped up to the suited bulldog on the door with my name. He checked it off the list and then asked for ‘’the password’’. Stumped?. Giggs hadn’t mentioned a password. Just as I was pulling out my celly to ding him, he stepped out from behind the bulldog and informed him ‘’ she and her guest are cool’’, at which the bulldog sat back. Poor Giggs explained that all night the venue had been uncooperative with his guests so he was having to play doorman. Poor guy. Downstairs in the intimate venue it was getting busier with Peckhams finest grimy boys and gals getting warmed up whom Giggs described as ‘’manden and hotties-just family invited’’. It was clear that the hotel weren’t used to ‘’this type of crowd’’ and most likely weren’t best pleased. Nevertheless Giggs popped on a slick black suit, greeted his guests and mingled as the party popped off big time with a really nice vibe. His album ‘’LET EM AVE IT’’ was played all through the night and a moment to cherish considering our antagonistic past was as Giggs told me ‘’thanks for coming Jas-it means a lot’’. (Who would’ve ever thought he’s ever say that LOL) perhaps he was tipsy.

Next my guy dragged me out of there to run up the road to the NERD party at Studio Valbonne. The venue was heaving as we entered and was 90% full of eager, skimpy, dancing as if it were their last day on earth girls with the remaining 10% of men looking as if they’d just won the lottery. I guess the law of averages says that as Pharrell is unlikely to leave and please every female that’s hot for him some of these guys must get lucky. The naked chics were kept excited by the sounds of celeb DJ to the stars DJ Manny Norte who always has a party jumping. Party host Adedapo Awofisayo sat us at his VIP table and spoilt us all with an abundance of beverages and by the time NERD hit the stage at 2am for a quick set the vibe was electric. Football manager Chris Nathaniel was holding court with music manager Paul Boadi in one half of the club and when Pharrell came in it was as if England had won the world cup so hardcore was the sheer volume of the screaming which was off the Richter scale.

Remember the talented, young, black comedian impressionist that I first brought to TV airwaves at MTV BASE for BLACK HISTORY MONTH called Jason Lewis? He has just had the ‘’Jason Lewis experience’’ commissioned by BBC3. Congrats Jase-you deserve it! Thanks to Jay Davidson & Nana Hughes and Jo Sargent for making it happen! Upwards and onwards.