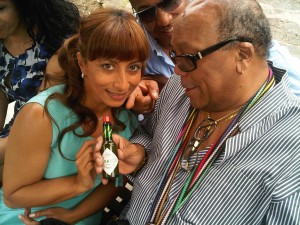 When asked whom in the music world my industry friends would most like to meet its not the artists that grace our tabloids that come up most frequently but a man who is single handedly responsible for much of the great music from yesteryear that has facilitated present day music- a man renowned for working with Michael Jackson on off the wall and bad, and who pointed Michael in the direction of new jack swing and Teddy Riley to update his sound. A music conductor, record producer, musical arranger, film composer, television producer, and trumpeter.  A man that worked alongside Ray Charles, Dizzy Giiespie, Lionel Hampton, a man that arranged music for Frank Sinatra, Dinah Washington and Ella Fitzgerald, a man who scored the music for iconic movie The Color Purple’, earned a record 79 Grammy Award nominations,27 Grammys- a man called Quincy Jones. One of the last living music legends that encompass’ and embraces acts from the early days to having respect from modern day acts like Mariah Carey and Snoop Dogg. In all my work with young music stars in the states, when Quincy turns up on set, its as if the lord himself has graced earth with his presence!. Probably as many modern day artists have sampled old classic beats that Quincy was responsible for making!

I first met Quincy in South Africa 4 years ago at Oprah Winfreys New Years Eve celebrations. He spent hours talking to us and recounting olden day stories that are fascinating. Listening to him recall the conversations with legendary figures and talk about what the world was like once upon a time is a thing I could do daily. So when our mutual friend fashion and jewellery designer Heba Elawadi asked me to join herself and Quincy- (or Q as all his friends call him) it was a no-brainer. Heba asked me to invite a few friends if I liked so I reached out to music colleagues and friends including MOBO founder Kanya King, singer Terri Walker and others that I knew would appreciate lunch with a legend.
We arrived in the grounds of a fabulous home in the country where Q, Heba and a few family members were awaiting my arrival before eating. I was of course late due to the usual hiccups and racing around country lanes trying to figure out why they don’t just number their homes instead of giving them fabulous, grand names. When I did finally turn up, Q was sat chilling in the garden chatting to friends and enjoying the rare UK sunshine. Hebas parents had laid on a feast fit for a king which was apt as Q is royalty. Heba was rocking a lovely maxi dress by her own brand El Horreya: Designs For Freedeom (www.elhorreya.com <http://www.elhorreya.com> ).

We spent the afternoon laughing, teasing each other and talking about music.i kept trying to force Terri to sing but she kept it moving with polite conversation. We toasted our blessed lives and danced with the belly dancer that came out to entertain us post-lunch. It was a very opulent day sipping the best beverages, tucking into exotic Egyptian food and sharing time with very special people. My favourite moment was just before Q began his food and pulled out of his travel bag a bottle of hot pepper sauce! Well-I nearly screamed with delight! I have always put hot sauce on all my food. When I say all I mean all. I have even been known to smear it on pancakes much to Mariah’s families disgust lol! Quincy revealed he took mini bottles on all his travels as well as small packets of healthy Korean seaweed to eat alongside his food. those tips from Q, plus his still twinkling eyes and appreciation for life and the good things were enough to make me smile all week long! Always up for a laugh, when asked what the secret to his long, successful life was Q retorted ‘’booty!’’.

The next night I was invited to dinner at the rooftop Chinese restaurant at the royal garden hotel overlooking hyde park with another legendary A&R man – Jack Stevens- a man that has worked alongside Sade, the Eurythmics and many more. Me being the ever attentive nosy journalist hack pried him for more music industry stories from back in the day and whilst I’m under oath not to repeat any I did conclude that back in the 60’s and 70’s they were really rock n roll unlike our pretenders to today’s throne.

With young comic talent like Jason Lewis and Kojo  making waves at the BBC and MTV it was only a matter of time before many more began emerging and one duo that are making a name for themselves with music artists even pointing me in their direction are new urban comedians KG & Nicholas Marston who are a comedian and a writer that have with their comical interludes had the internet alight this month. I attended their live show night at the Gem Bar just off Regent Street which was heaving with a young, sexy crowd that were hysterically laughing all night as the comics did their thing with their hilarious characters ‘’English Dread and African Dread, Shadrack and the Mandem, Caramel the R&B group from Brooklyn South London’’. 2 other performers that had us rolling with their original, very on-point comments were Jason Howard and Kayleigh. Look out for them!

I ended the week by having my hair trimmed at the uber cool 3V HAIR SALON in Notting Hill where paparazzi stalk clients. I go there so I can pretend to be famous whilst I enter and leave- sometimes it works but it mostly doesn’t. as soon as my Barnet was a decent state i whizzed up the road, again to the Royal Gardens tea rooms for a high champagne tea for my friends birthday before popping off to the ‘’Off the Radar’’ music event at Westbourne Studios where a lot of music acts including Preeya Kalidas and Terri Walker were performing for a very local, cool, West London crowd.
Finally I attended THE BILL/KIDULTHOOD actor Aml Ameens birthday/ leaving for L.A soiree –more on that next time!