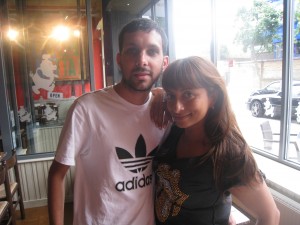 Streetdance has come a long way since I was a break dancing kid on my mates lino in Covent garden back in the day. Back then hip-hop wasn’t even taken seriously let alone the dance form that accompanied it in the 4 cornerstones of the culture that also included graffiti and turntablism. So now that djs are superstars and graffiti is being displayed at art galleries its only natural that the dance form explodes too. Over the years UK ambassadors like Jonzi D have kept the art form in the theatrical world. More recently filmmakers have made a small fortune from dance films both American and English leading to dance troupes Diversity and Flawless achieving mass fame last year. Another group that’s been sweating away selling out theatres and wowing audiences from around the world are choreographer Kate Princes group called Zoo Nation who have been performing a spectacular show titled ‘’ into the hoodz’’ . the show had a sell out run in theatre land last year and last week brought back another run at the Royal Festival Hall on the South Bank. The press night was attended by a lot of talent from the music world and celebrity but it was the reaction that Diversity got that was mind blowing. The audience were seated and the show was ready to begin when diversity came in quickly, quietly and without fanfare to take their seats and before you knew it a few kids spotted them, shrieked with delight and chased them for autographs and photos. Well within minutes 40% of the audience that were seated were trying to grab, scream and get a piece of the group. The show start had to be delayed until everyone could be calmed down.
Once the show began it was as amazing as I recall it the first time around. The story is a very witty amalgamation of fairy tales with characters including Lil Red, Spinderella and Rap-un-zel but all based in the Ruff Ends Estate. The story sees 2 young kids run away from home, one of whom is played by reality dance show star –Akai, who the crowd roared for throughout the show – his female counterpart was ultra impressive with her dance skills too. The kids befriend a dodgy character who persuades them to ‘acquire’ 4 items – a red hoodie, an ipod, a weave and a gold sneakers. the music is an amazing mix of urban genres and the dancing is literally out of this world!. The choreography is very witty and perfectly narrates the story enchanting young and older audiences simultaneously. A thoroughly well thought out show with brilliant graphics, sets and atmosphere that leads to spontaneous audience participation and excitement. Later the same week ZOO NATION performed at the queens park festival for the west London community and had local youngsters enchanted with their 15 minute set.

I was invited to join actor Aml Ameen at his 25th birthday party that was doubling up as his and his girl friends leaving the UK party. Aml had people from all walks of live glued to THE BILL years ago as the young black policeman, and also in Noel Clarkes movie Adulthood as well as appearing onstage in theatre roles. Both actors are moving to L.A as Aml has been offered a big part in an American drama. Fittingly Aml’s party was held at the Hollywood Arms in Hollywood Road in Chelsea. Could it have been in a more apt location? On arrival I was pleasantly surprised to note that it was a very small gathering of his closest family and friends which included actor / playwright Kwame Kwei-Armah and good friend and actor Adam Deacon, both of whom gave heartfelt fitting speeches in honour of Aml on the night. As well as Amls lovely daddy singing bob Marley songs and both Aml and his lady speaking of their love for each other and the support of their loved ones ,a cake was cut, a lot of catching up was done and you could feel the love and unity in the air.  Also it must be recognised that a young aml must have had to battle all types of stereotypes, issues and hurdles to reach the top of his profession throughout the years. Its easy to get pulled the wrong way for young people in the current society climate but Aml has been a strong, positive soldier in TEAMUK , helped make my job empowering young people and giving them a platform to show their talent to the world and I cant wait for his American takeover.

Finally I caught up with a young man that has had me intrigued for a good couple of years now. I first spotted magician Dynamo on the music scene pulling magic for stars that I was working alongside and always wondered what his story was. We always have fun together at parties but I don’t really know his story so  I met up with him in a pizzeria opposite the roundhouse in Camden where we spent the afternoon chewing the fat.
Dynamo grew up in Bradford which he admitted ‘’doesn’t have much goin on. It’s not a wealthy city. It’s famous for riots. For me being a kid I got picked on cos I’m small and an easy target’’ but he admits that ‘’If it hadn’t have been for the negative things I went through, they wouldn’t have shaped me’’.

Dynamo revealed it was because he got bullied as a kid that his granddad stepped in with an occasional trick to cheer him up and the young dynamo calls him his ‘’magical grandpa.-My role model’’. ‘’I had 2 guys who used to pick on me called  “Sonny and Dean”. They put me in a wheelie bin and threw me down the hill. After that my Grandpa taught me a technique to stop people lifting me up-and that’s how it began’‘’I had to use magic to get me out of trouble and it became a way of life. I entertained the kids at playtime. The big kids were scared of me cos they thought I’d put a curse on them lol!’’.

His granddad may have introduced him to magic but it was a magician in New York at a convention that dubbed him with the name ‘’Dynamo’’. He explained ‘’it was in New York in the Hilton hotel in 2002. I was there for the legendary magician Whodinis 100 year death anniversary. All the big magicians were there. I ended up performing to all these famous magicians. A magician called Aaron Fisher yells “this kids a fuckin dynamo” so that’s how the name came about’’.

Its interesting to me that Dynamo has performed for many music stars and events and I was intrigued to learn how music had influenced his career.
He informed me ‘’Music has always been a part of my life. My mum had a radio but no TV. So I grew up to MagicFMs style songs. Like many kids I tried dance moves that I saw in music videos. Michael Jackson used a lot of magic in his music videos and shows. The most famous being the Lean forwards in Smooth Criminal,I started body popping at Mapa West Bowling Estate. It was run by a guy called Emile who introduced me to The Princes Trust’’.

Dynamos success story is paralleled by sadness and pain though as he tells me that his first big break came in hospital as he has always suffered from Chrohn’s disease. He nearly died aged 19. He describes Chrohns disease as being ‘’Like an open wound and having dirt rubbed into it all the time. Its a pain u get used to 24 hours a day’. In hospital I was having treatment and remember thinking, If I had died in hospital what legacy would I have left behind? So I decided to pursue my magic. My mum often let me try anything and fail myself so I could learn my own lessons’’.
Dynamo created a master plan for funding. All his mates were making mix tapes on laptops so he used the same technique to create a mix tape style DVD.
He then got a princes trust award in 2000 to buy a laptop and planned road trips where he went to the middle of town centres and just did magic all day long to random strangers. He moved to London 7 years ago but didn’t really want to be here .‘’I didn’t wanna move here. I’d still prefer to be in Bradford.When I buy my first home it will be in Bradford. at the time my manager was promoting rappers tours. All the people were too drunk to notice me as a magician but I persevered’’.

Dynamo encompasses a true young element of swagger and hustler that reflects the ‘’cant stop wont stop’’ ethos of hip-hop icons such as P Diddy. He once ended up blagging himself backstage to Snoop Dogg at Wembley, and showing the hip hop star some magic which led to the over impressed snoop making up a 3 min freestyle in honour of the young dynamo and now they’re twitter compadres!. Since then he has performed backstage for Coldplay leadman Chris Martin and his wifey Gwyneth Paltrow as well as footballer Rio Ferdinand and many more superstars-just go to his site to see the footage-its impressive!.

Dynamo is also responsible for bringing a modern day approach to his field which up until now had mostly been dominated by older magicians like Paul Daniels in the UK. He is responsible for the worlds first twitter magic by asking snoop to pick cards online across the Atlantic-once again just go to his twitter page to check him out.

He reveals that to get him into the right frame of mind pre show he listens to a lot of hip-hop. ‘’I use music a lot and am inspired by it. I always listen to Lil Wayne “shoot me down”….and “stronger” Kanye West. it gets me ready to take on the world!’’.

Dynamo stands out amongst his peers cos he thinks out of the box and involves current visuals and excitement into his magic set. During a 5 night theatre show at Soho Theatre he included hip-hop elements that had a diverse crowd awed by his talent when he brought a hip-hop style to his set with a hype man and a dj. To finish the show he made the dj booth vanish!.

This smartass now does as much work in Asia and Singapore where he is treated like a superstar.He smiles ‘’My vision of a stage show is I want to be a rock star on stage, People from Bradford don’t travel the world and party in Vegas and I can’t believe where I am now. When it comes to young people there are too many doors that are put up and we need to smash them down. Kids are force fed a structure for success but we need to let kids make their own paths. Most successful paths come from mistakes. Nowadays there’s too much control. There needs to be more creativity and freedom. Magic is taking something that doesn’t yet exist and making it happen. I constantly reinvent tricks. I like interaction. I am doing well but I try to only use my powers for good!’’.
Another young champ doing his thing in his own lane- you’ve gotta be proud of our UK strong hold right now, its unbeatable!