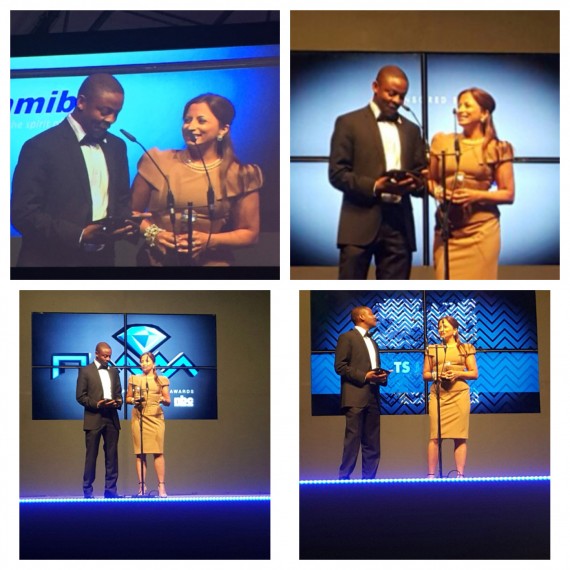 Joan Collins was in New York this week being honoured by private members club, The Friars Club. As she made her toast she stated ‘’there is this old saying that goes around in Hollywood ‘’at 20 a woman is like America – fresh, new and ready to be discovered. After 40, a woman’s like Asia – she’s mysterious, exotic and inscrutable. After 50 a woman is like Australia – not easy to get to but when you get there she is warm and welcoming. After 60 a woman is like Africa. Everyone knows where it is but no-one wants to go there!’’

This shows us how out of touch with the modern world both Joan Collins and Hollywood are if they’re still thinking like this. Africa is the continent that most of my media savvy peers and business minds have been clamouring to visit this past few years. With the world finally waking up to the fact that it’s not just about sickness and poverty, Africa has been quietly killing the fashion, media and business worlds. You only need look at who is buying up most of London’s expensive property (Nigerians) and the fact that the world’s richest black woman is not now Oprah, but Nigerian oil tycoon Folorunsho Alakija with an estimated fortune of $7.3 billion. Africa isn’t just safaris and exotica though. It has culture, history and a landscape that is unrivalled. 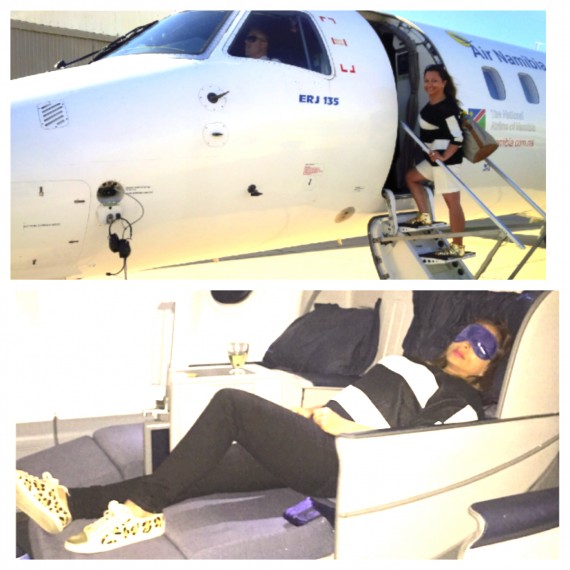 AIR NAMIBIA FLEW US FROM LONDON, VIA FRANKFURT TO NAMIBIA IN THEIR LUXURIOUS CABINS WITH INCREDIBLY HOSPITABLE CREW.

Just this past weekend I was in Namibia for the 5th Annual Namibian Music Awards which took place again in the seaside town of Swakopmund, at the Swakopmund Sports Indoor Centre. The Town of Swakopmund was once again, the proud ‘Official Host’ of the Namibian Annual Music Awards 2015. (NAMA). Flight operators don’t make it easy though; with us having to take three flights to get there from London, but luckily Air Namibia have a first class service that is above and beyond comfortable! Also, once you’re there its more than worth it with first class hotels (my faves are The Swakapmund Hotel and Entertainment centre and Hotel Eberwein), restaurants (my favourite is the Jetty which is akin to a New York brassiere right on the ocean on stilts), and incredible fresh food options. 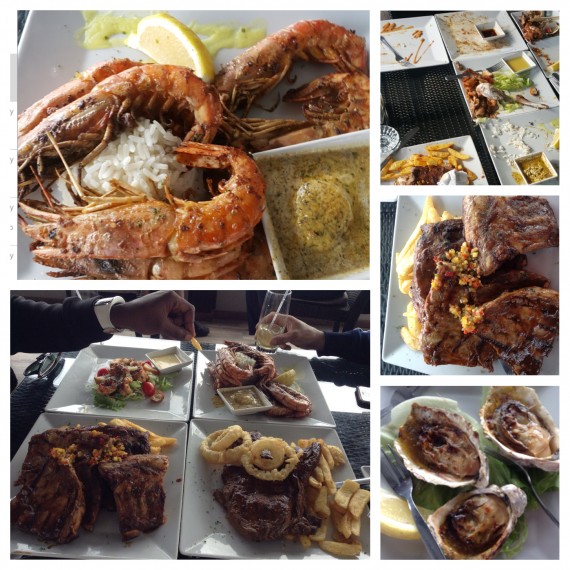 FOOD ALL ACROSS SWAKOPMUND IS DIVERSE AND DELICIOUS- MY FAVE- THE JETTY RESTAURANT RIGHT ON THE SEA ON STILTS!

I was lucky enough to be working there as an international judge for the music awards and also presenting the Best Album award on the night. We spent 30 hours flying there, a day and a half working, with a day off afterwards and 30 hours flying back via air Namibia, so I was up in the air more than I was actually in the country!

As ever, the sheer world-class standard of both the show and performers blew me away. With a huge stage, striking set, incredible graphics and lighting as well as huge screens and camera cranes, this was one expensive, well-organized event, and one that surpassed expectations. I’ve been to many award shows around Africa and I have never seen one being delivered like this years’ NAMA’s.

As is the norm across the African continent, the awards ceremony was split over two nights, with the Industry Awards taking place on Friday to award the smaller categories, and the main event on Saturday night awarded artists in the higher-profile, more popular categories. Both nights of the ‘blue carpet’ event were televised live on Namibian TV on main broadcast sponsor NBC who had a buzzing red carpet crew, which streamed online throughout. Many people watched the awards via live stream with over 17,000 viewers with 62% in Namibia, Rest of Africa 18%, Europe, America and Asia 20%. Their tech, handled by the MTC brand, was more on point than most London awards I’ve attended with ‘’NAMA free wi-fi’’ running strong across the venue for social media engagement and of course a lot of banter and trolling of performers and winners.

The show hosts were local stars Gazza and Lady May, who was driven into the arena in a uber flash Bentley for the opening performance alongside Keko (from Uganda). Later one of the rock performers The Namibian Cowboy rode onstage on a Harley motorbike, and the best female winner Oteya started her performance spinning down on a high wire from the vertiginous ceiling. One winning act was even accompanied onstage by a tribe of authentic Herero tribes people dancing and hollering. 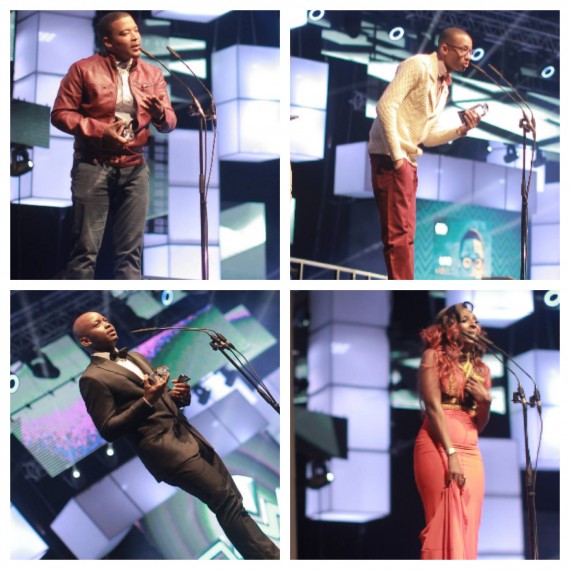 This year’s show also included live performances by StarDust, Nianell, Riana Nel, Bullet Ya Kaoko, Tswazis and Female Donkey. My favourites were Female Donkey, Tswazis and Nianell.The vivacious Tswazis, kept us all bouncing in our chairs and on our feet with their dynamic choreography, straight after they won the album of the year category, which I presented to them. 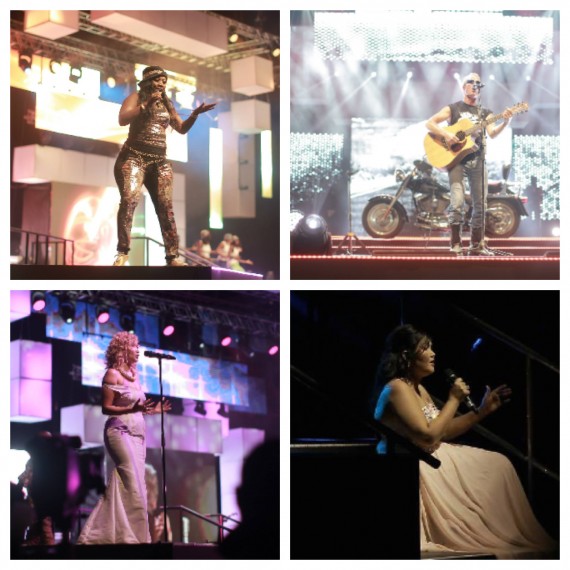 NAMA Executive Chairman, Tim Ekandjo told me ‘‘the performances were on point, entertainment value was high, the stage was bigger and better and the production of the show was accurate. That is exactly what makes a great show. After having delivered a sterling NAMAs 2014, we knew that we needed to maintain the standard or improve it and we decided to improve it against all odds to be the best amongst the best in Africa and the world, and we have achieved that with flying colours. We would therefore like to confidently declare the 2015 NAMAs as a resounding success!’’ 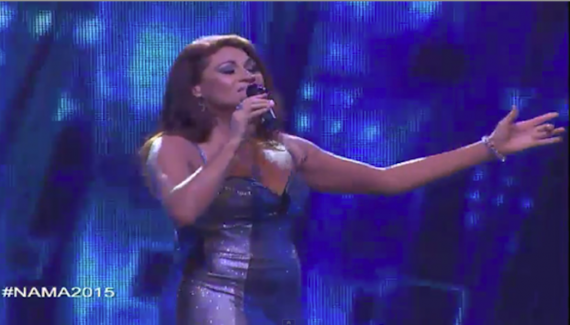 Hundreds of music lovers both local and regional flew in for the NAMAs. It was also attended by Ministers and political leaders who spoke about how proud they were that Namibian music was starting to get a wider regional recognition around the continent.

Now habitual stage invader Kanye has a lot to answer for. Nowadays acts globally are all trying to pull a rebellious moment onstage. Namibian artist LeShawn bounded onstage near the end of the ceremony to cuss the media and the public for not paying attention to his music, and industry efforts. The audience didn’t bat an eyelid and all continued with no drama lol.

The same morning as the show there was also a conference on ‘How To Succeed in the pan-African music industry’ seminar hosted by the NAMA Academy where a panel of international judges including myself, talked about our opinions on the songs and videos and took questions from the gathered audience. Artists turned up in huge numbers and engaged with us for over an hour. In fact one of this years nominees was spotted and earmarked for international collaborations, posed for Pan African breakthrough with extended support from Pan African and international media partners, showing that NAMA is an unrivaled primary platform to showcase and celebrate the best of Namibian music to audiences not just across Namibia, but also across Namibia’s borders to audiences across the rest of Africa and the world – opportunities that have never been possible for Namibian artists historically. 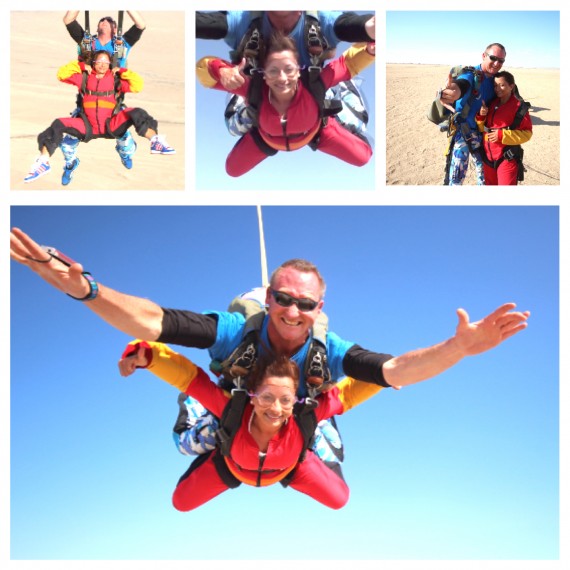 THE BEST SKYDIVE LOCATION EVER- OVER THE NAMIB DESERT!

The next day I was determined to make the most of my day off so spent the morning skydiving, the afternoon on a sea safari and the evening quad biking through the Namib Desert. 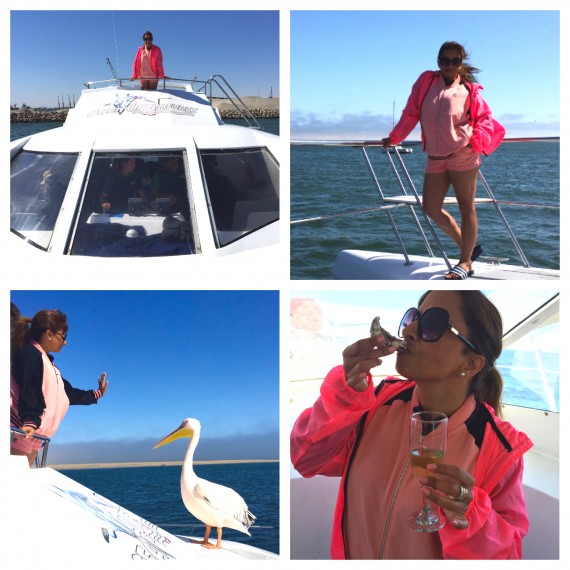 An incredible country with very welcoming people and an abundance to do, from visiting local villages and tribes, fishing, safari, quad biking and sand boarding in the desert, dolphin cruises where you can view thousands of friendly seals, pelicans, dolphin and flamingos or just marvel at the unusual birds and plants that populate the region. Palm-lined streets, immaculate old buildings and well-kept gardens give Swakop (as the locals call it) a unique atmosphere, and make it a pleasant oasis in which to spend a few days.

Swakopmund is Namibia’s largest coastal town and is a huge draw for merrymakers and vacationers from all over the globe. This seaside resort showcases its German origins in its European-style colonial architecture, creating a breath-taking juxtaposition against the landscape of the Namib Desert.

African music is booming, and so is its web presence. Ever-expanding numbers of websites, blogs, e-tailers, Tumblrs and online magazines dedicated to African-influenced sounds represent a genre of music that is as fast evolving as the social and online media that shows it love. A new generation of African and diaspora music stars like P Squared, Ice Prince and D ‘Banj have gained attention in recent years, and African hits are a perennial trend on international radio and chart playlists too. Don’t sleep on the amount of talent this great continent is developing and selling globally.

This years Namibian Annual Music Awards juxtaposed with this absolutely unique location, made it a musical adventure with action both in the air and on the ocean. Salute Namibia! 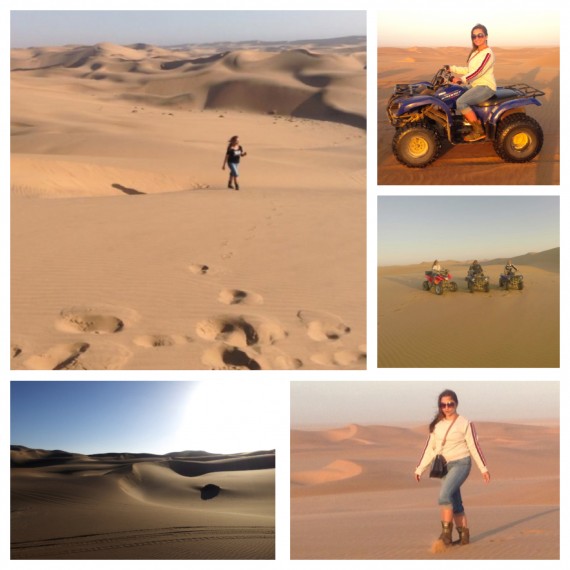 QUAD BIKING ACROSS THE NAMIBIAN DESERT IS A ONCE IN A LIFETIME EXPERIENCE!-IT’S WHERE THEY SHOOT STAR WARS AND MAD MAX!