This week saw the opening of the brand new west-end musical ‘Beyond Bollywood’ making its UK Premiere at the London Palladium, just seconds from Oxford Circus tube. 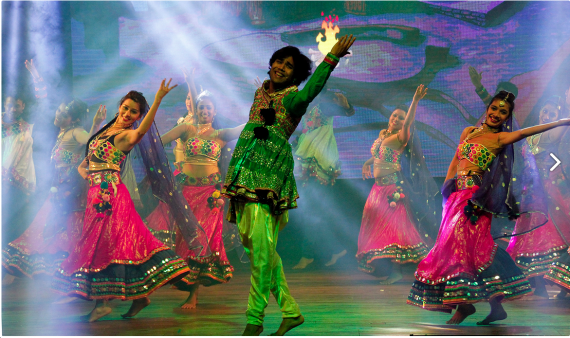 BEYOND BOLLYWOOD IS SHOWING NOW FOR 60 PERFORMANCES AT THE LONDON PALLADIUM.
All pics copyright Amit Ashar & Ibrahim Merchant.

The show premiered in Mumbai, India in the summer of 2014 and has garnered tremendous appreciation ever since. With a heaving red carpet of princess-like-ladies wrapped in jewel coloured saris, paparazzi, onlookers, camera crews and celebs like Wayne Sleep, the premier night in London was buzzing!

The diverse audience were treated to an incredible show full of cheesy lines, blingtastic pomp and were transported right into the epicentre of a full on Bollywood film scene. 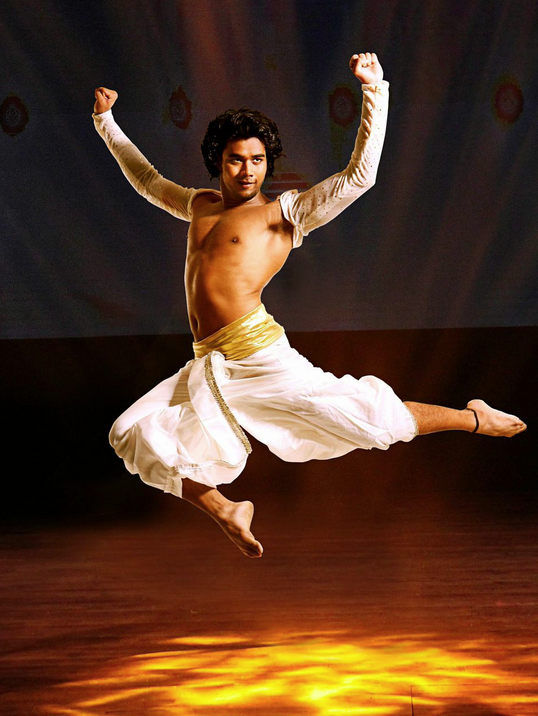 However, be warned, you can’t attend a Bollywood spectacle without also transporting yourself into a fairy-tale state of mind. Cheesy lines (‘‘this theatre is my heart and dance is my heartbeat!’’ ‘’Follow your heart, where dreams turn into reality!’’ And ‘’there is nothing to fear when Balloo is here!) and ghostly apparitions that appear in a cloud of white dust, are all par for the course, and like a pantomime you have to get into the spirit of things to truly appreciate this genre. 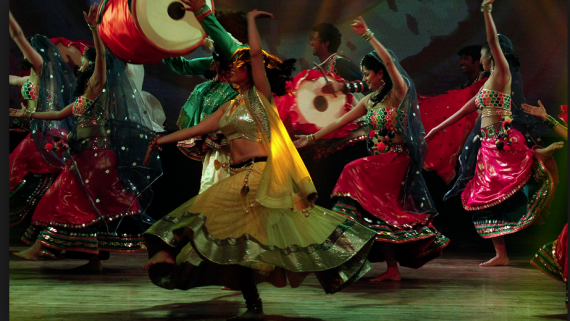 Set in Munich Germany and India, the story follows Shailey Shergill, whose mother owned a run down Indian theatre in Munich that her father is intent on selling. Her mothers dream is to turn it into a success with traditional Indian dance shows. Shailey travels to India and is taken on an adventure of Indian culture, festivals, rituals and dance that are breath taking!

Written, choreographed and directed by self-taught dancer Rajeev Goswami, with lyrics by Irfan Siddiqui and featuring an original, infectious score by Salim-Sulaiman, we were hit hard with a high-impact, full techni-colour, leaping, spinning and twirling dance opening, right from the start. A group of live musicians with their instruments set the scene for the story with their tabla’s, sitars, keyboards and vocals all conversing together onstage. 45 dancers, technicians and musicians from India make up the cast and its obvious with their style and technique that they’re the real deal. 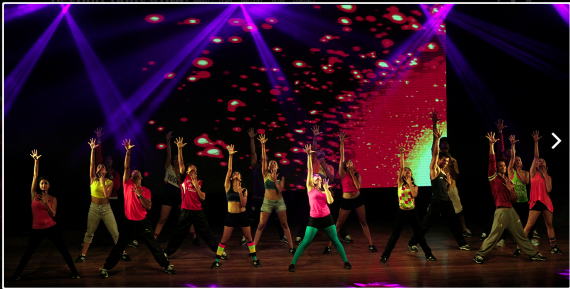 The dancing is mesmerizing with its very stylised Indian choreography, with staccato hand gestures and swirling, twirling spins that Margot Fonteyn would be impressed by. In fact, so much of the choreography mirrors a western ballet or musical in structure. Barefoot, grounded pirouettes like ballerinas, thudding foot taps like tap dancers, even a pas de deux routine with male and female solos that came together to form a perfect otherworldly union. The sounds of the rhythm of shaking ankle bells, juxtaposed against intricate body popping locking techniques had us all gripped.

With huge, full cast, ensemble song and dance numbers, to tracks like Jai Ho (the very catchy song composed by A. R. Rahman for the 2008 film, Slumdog Millionaire), and oodles of high intensity dynamic smiley dancers, this is Bollywood come to life in an eye popping, mindboggling way. Beyond Bollywood mixes Indian and western dancing and fuses them with a pizzazz and vigor in a way that I’ve not ever seen before (and as a former dance student, trust me, I’ve seen it all!).

The musical explores the friction between two choreographers who specialize in traditional folk dancing and Bollywood hip-hop routines. During a section, which showed a western music video style, sexy girls dance routine, the character onstage looked disgusted and unimpressed stating ‘’this is not choreography but pornography!’’. Hilariously, my mother turned to me with a nod and knowing look that said ‘’I told you so!’’

The high points of the show are a black and white gloved number titled ‘‘Sheila’’, which is arresting and hypnotic, as if you are sat in the center of an exotic Bob Fosse number, a beautiful contemporary dance section, a traditional Kathak routine, a lilting Garba dance from Gujarat, a high impact Bhangra dance originated in the Punjab, a dreamy gold and red shaolin monk style Chhau martial arts dance and a section where ‘its raining men’’. 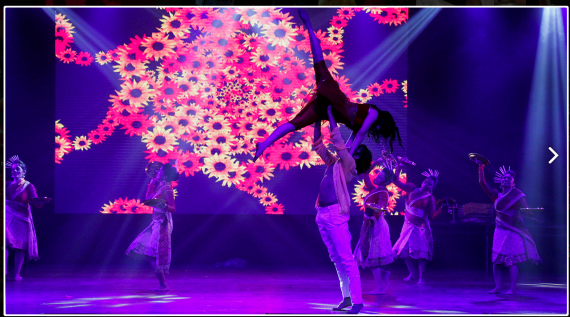 As well as all the high impact energy, fantastical staging, flashing lights, haze smoke, loud noise, fiery dancing and drumming, there is also much visual spectacle with huge colourful Vegas showgirl and Indian regal costumes. In fact, the ‎incredible array of jewel-coloured costumes seem to change in mere seconds over and again, as do set designs and graphics honouring Indian deities, cultural traditions, festivals and landmarks.

There’s also much slapstick humour too with quirky, contradictory characters. My mum was high as a kite afterwards telling me ‘’it reminded me of my motherland that I left behind when I came to the UK in the sixties. It reminded me of our big family gatherings, colourful festivities and the sheer beauty and exuberance of my homeland. I feel very proud!’’ 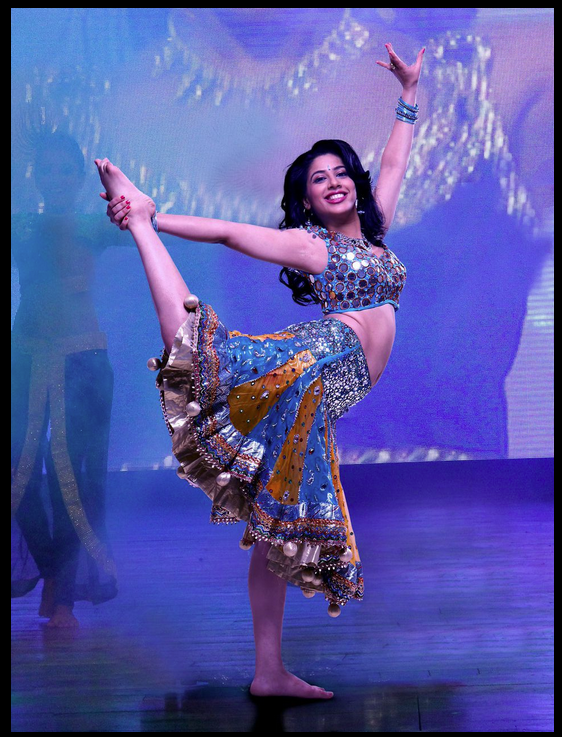 It’s clear that the very best of Bollywood’s creative talent have brought this spectacular event to life but they’re in London for 60 performances only. The last big Indian west end extravaganza was way back in 2002 when Andrew Lloyd Webber brought Bombay Dreams to London’s west end. Now he’s done it again with Beyond Bollywood.

The colour, energy and sheer exuberance of Beyond Bollywood is a great experience for audiences from all backgrounds and takes you on a truly authentic cultural tour of India capturing the fire, heat and wonder of the country. Rajeev Goswami has accomplished his mission to bring an authentic representation of India to the west, beyond the glitz and sheen and cultural clichés synonymous with Bollywood. Beyond Bollywood is not just a musical; it’s a theatrical experience never seen before outside a Bollywood movie.

Many snooty brands that gave this show negative reviews just didnt get the tongue-in-cheek vibe of the genre. It’s not Shakespeare-it’s kitsch!
3.5 / 5 STARS FROM ME!

Visit http://beyondbollywoodmusical.com/ for more details on the show.