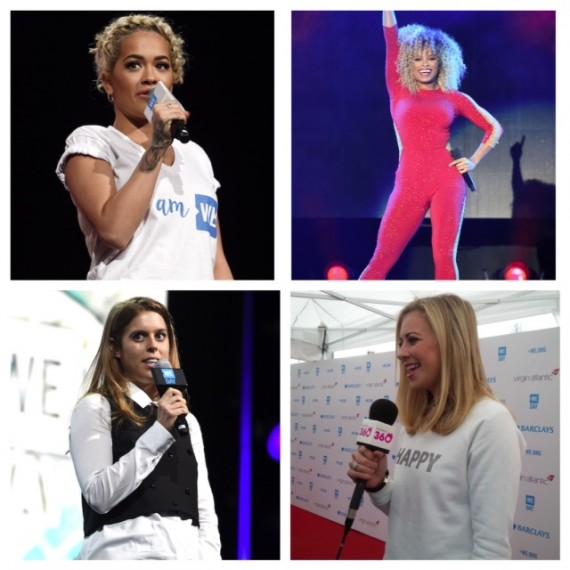 School children and from all over the UK were joined by celebrities who all turned up just after 7am, to celebrate the good thoughts, words and deeds that they had put into action by volunteering in recent months. 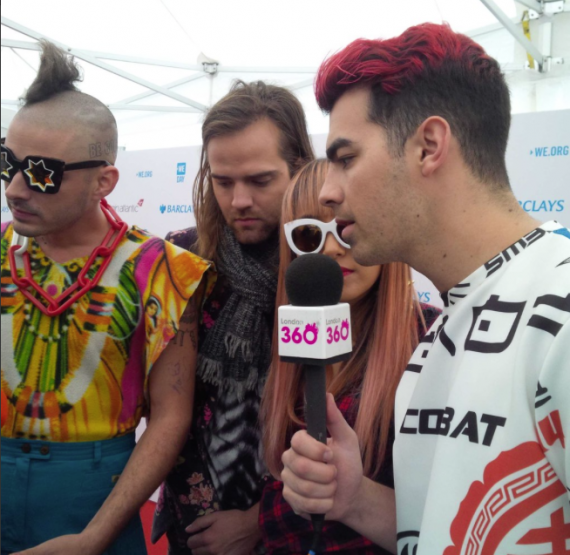 JOE JONAS AND HIS BAND DNCE WORK THE WE DAY RED CARPET.

In a nutshell, you couldn’t buy a ticket to this event. You had to have offered your services to do some good in your local community to win a ticket to WE Day. Teachers had bundled up their classes to reward them for the day, being entertained by pop stars Labrinth, Fleur East and Rita Ora, as well as hearing from their student peers about the great work they’ve done over the past year.

WE Day (founded by Craig and Marc Kielburger), is a series of educational empowerment events celebrating young people making a difference in their local and global communities, and brings together inspirational speakers, presenters and performers with tens of thousands of students to celebrate the power young people have to change the world. Its aim is to inspire 12,000 young leaders alongside their passionate teachers. 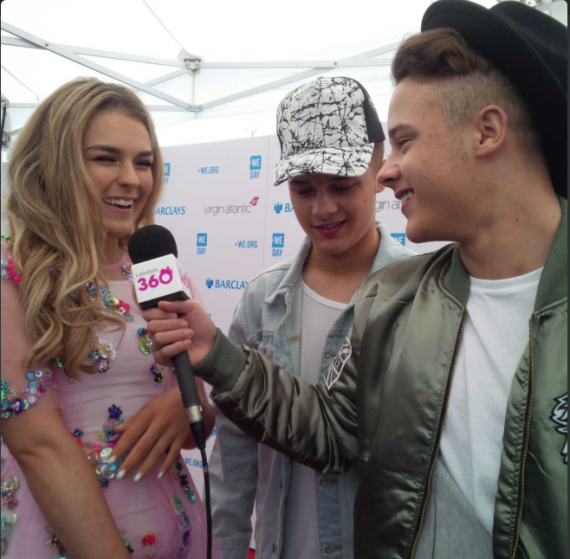 THE BROOKS AND TALLIA STORM GET CHATTY ON THE WE DAY RED CARPET.

A-List WE Day speakers included Holly Branson – who leads on putting the UK event together, presenters like MTV stars Laura Whitmore, Becca Dudley and Bluey Robinson and performers like Tallia Storm and poets like Karl Lokko. 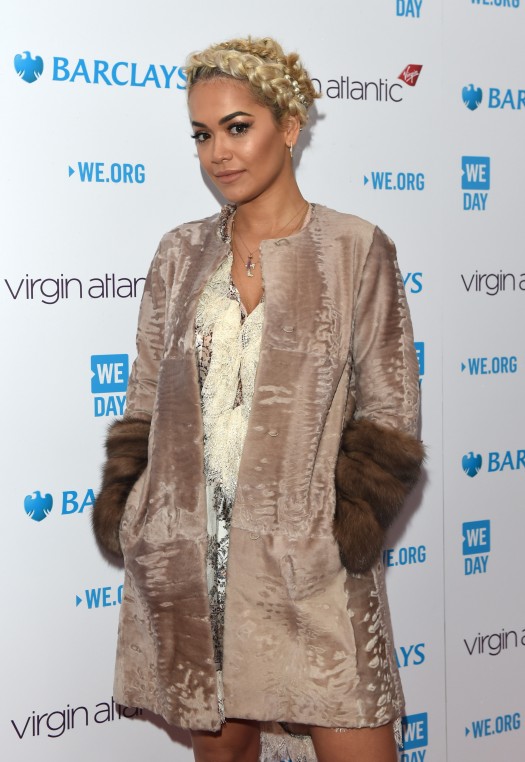 On the very cold, wet red carpet world-renowned speakers, presenters and performers explained why they were passionate about helping change the way young minds work.

Clive Owen explained ‘’my daughter went for a trip with Free The Children, then we went as a family and it was incredible. The great thing about WE Day is they host these annual events in Canada and the USA and you can’t buy a ticket, you have to earn it by doing good things’’. 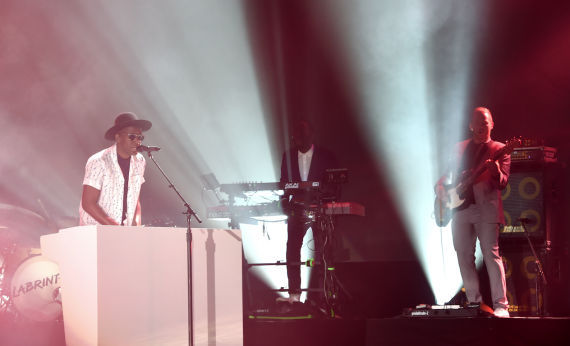 LABYRINTH STRATED AND ENDED THE SHOW WITH PERFORMANCES OF ”LET IT BE” AND ”EARTHQUAKE”.

Holly Branson told us why celebrity inclusion is important ‘’I think its really great for celebs to get involved because instead of just being that singer on stage or that person on TV, they’re actually coming talking about global world issues, and its to make kids understand that these are real people that really care about other things and that the kids should do the same. Princess Beatrice and myself are going to be speaking about friendship and working together as well’’.

African-Norwegian singing duo Nico and Vinz told London360 ‘’ today is all about the kids. It’s very inspiring to see people do good things for other people like here today. Giving really gives something back into your heart. Small things also matter, so you don’t have to do a lot in order to make a difference’’.

Lord Rumi Virdee laughingly regretted his age ‘’I think it’s so important; the movement of giving young people a voice and making them proud of a community. I wish opportunities like this were around when I was at school because it would have really inspired me to get involved in the community and help others’’.

Seeing it all in action really did make you believe that the WE Day movement of social change is sweeping not just the nation, but also the wider global youth movement. 12,000 youth were chanting joyously ‘’ we are powerful, we are determined, we are great!’’

MTV presenters Laura, Bluey and Becca kicked off the proceedings with a brilliant, long, inspirational monologue about how students can use their imagination to make the world a better place. ‘’One day we will look back at today and see a world before there was a cure for cancer and child poverty!’’ ‎

We heard from young people who had done small things like hold sponsored silences in protest at the lack of education for other youth across the world, cake bake sales or simply giving a hungry, homeless person a snack.

Others had been volunteering with foreign aid overseas, helping build and support villages and even set up their own much bigger charities and organisations. Student Trae James from Hackney was a great speaker, his fellow speaker Salina Zubair sounded like she had a bright future as a politician as did young Deng Yan San.

Holly Branson and Lord Rumi Virdee urged the arena to go silent for 30 seconds ‘‘we encourage everyone to think of a cause they care about and have a moment of silence to think about making it happen, do something small to make a big difference’’.

Rita Ora made an impassioned speech by telling the audience about her journey from being a refugee in Kosovo to making it in the UK and why we should be more empathetic towards refugees and migrants and see them as people like us that would make our country a better place.

Professor Brian Cox made a beautiful, sobering speech about planet earth and our place in the solar system, accompanied by incredible photos of outer space. He finished with a quote from Carl Sagans prose – now 26 years old – the Pale Blue Dot speech ‘‘the earth is where we make our stand, cherish this pale blue dot. The only home we’ve ever known’.

This year alone over 200,000 young people will come together in 14 stadium gatherings across the UK, Canada and the U.S. to take part in this unprecedented educational initiative. WE Day is just one of many positive youth movements of our time, but it feels like it could be the biggest if they manage to fulfill their aim of setting it up in every country across the world. 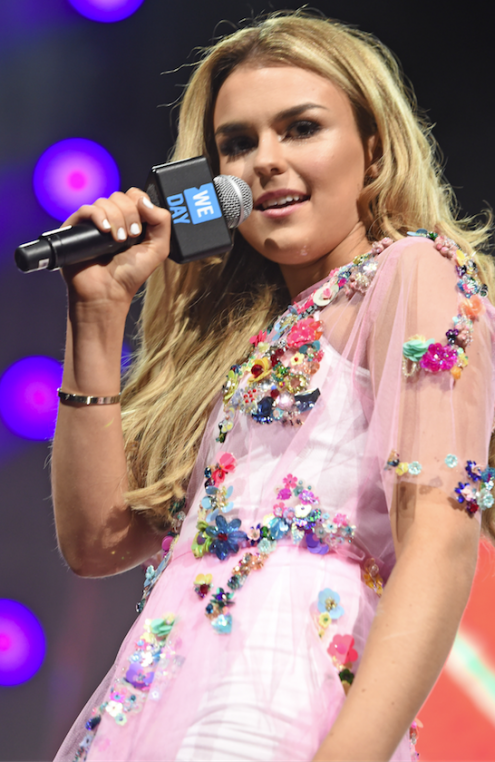 ‎Scottish soul singer Tallia Storm shared her story of being in Miami and seeing David Furnish sitting two tables away from her at a restaurant. She confidently took a once in a lifetime chance approaching him, and gave him her singing demo-tape to pass to his partner Elton John. You can see where this is going right? Elton called her two days later and aged just 14,Elton asked her to warm up for his show in front of thousands of his fans. Tallia evangelised ‘‘after I worked hard to find my storm within, I worked hard to find the next one. You can live your dreams too!’

Throughout the day, breaking up the speaker’s turns, we were treated to performances by Labrinth, Fleur East and Joe Jonas’ band DNCE, which saw the arena on their feet and jumping about beside themselves with breathless excitement. 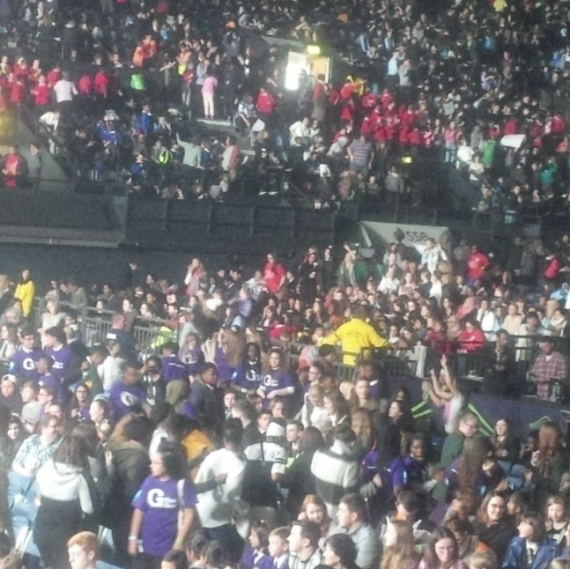 12,000 KIDS AT LUNCH TIME ALL HYPER EXCITED DANCING AND DOING THE CANDY DANCE TO DJ MELODY KANES TRACKS BLASTING LOUD ACROSS THE SPEAKERS.

This movement of young people leading local and global change feels powerful. It celebrates and inspires this generation’s shift from me to we—towards acting with intention, leading with compassion, and a belief in the power of community. According to research by Mission Measurement, 89% of teachers have seen students demonstrate more consideration of local and global issues, and 73% of teachers have seen previously disengaged students become more involved in school life.

Academy Award-winning actress Marlee Matlin spoke to the arena in sign language via an interpreter and told us ‘courage plus dreams equals success! Dream big no matter what life throws your way!’ 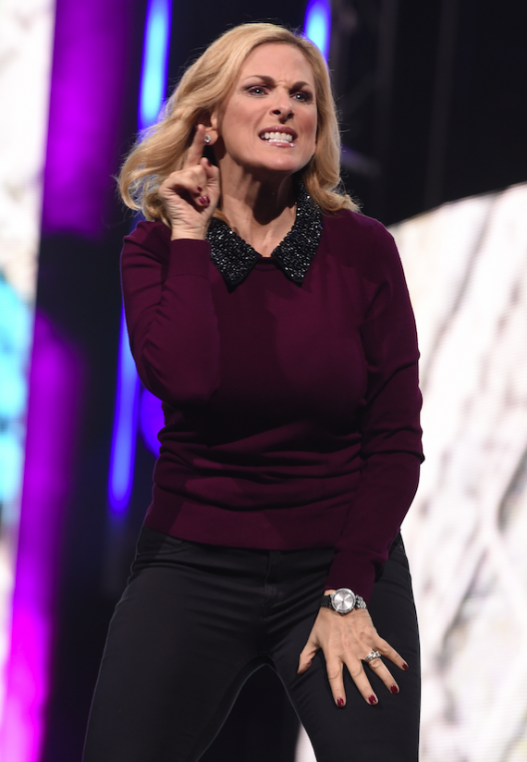 MARLEE MATLIN SPEAKS VIA AN INTERPRETER AT WE DAY.
Pic courtesy Justin Goff.

More than a one-day event, WE Day is connected to a yearlong free educational programme, WE Schools, which provides educational resources and campaigns to help young people turn the day’s inspiration into sustained action. WE Day and WE Schools are cause inclusive, empowering young people to find their passion and create the change they want to see. Together WE Day and WE Schools are a blueprint for building the next generation of global change-makers. 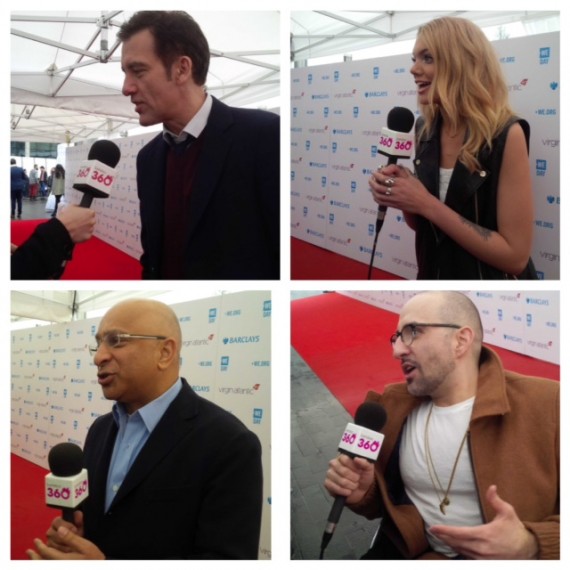 Kate Winslet told us kids that at school bullied her & called her ‘Blubber’. She learned there’s no thing as perfection. ‘’The red carpets and photos from Hollywood that you see on TV and magazines aren’t real. YOU are real. WE can change the world!’.

Even though young people these days are always told they have no future to look forwards to with huge debts, unequal access to education, a shortage of jobs and no chance of ever buying their own property, 74% of teachers say since WE Day activities, their students are now more optimistic about their long-term future.

Backstage Sam Branson shared ‘’I’m always proud of my big sis, Holly has sucked me along with her on this WE Day journey and its great. Charity is simply involving yourself with things that you’re passionate about, we’ve been doing it since we were kids, if you give good energy out of your (I call it a) love tank, you give it out and you get it back’’.

As WE Day is about young people doing good things at school, we asked Sam and Holly what kind of school kids they were. Sam joked ‘’Holly was always head girl! I didn’t really apply myself till I left school, but then my friend told me that your brain is like a muscle and it can grow so I started getting a thirst for knowledge’’ Holly ‘’that’s why I think education needs to change, I was lucky I enjoyed exams but not everyone learns like that, so we feel really passionately about the exam process in the UK and feel that it needs to change’’

Holly continued ‘’ I went to Vancouver to see WE Day originally and was keen to bring it here to the UK. As soon as you bring people here, you see the change in the children. A day job is really important because obviously you need to earn money but if you can give something back then I think you grow in yourself and you’re also helping others at the same time. We were lucky from a young age that we weren’t mollycoddled, we were told from very young about all the issues that are out there and so it makes you want to make a difference. It gives you something to get out of bed in the morning for’’.

‎My favourite quote from the day was by Northern Irish adventurer, athlete, rower, author and international motivational speaker Mark Pollock – who became the first blind man to race to the South Pole ‘’Sometimes the challenge chooses you, its what you do with it that counts’’.