This week a new exhibition ‘’I AM THE GREATEST. MUHAMMAD ALI’’, detailing the extraordinary life so far of the great man, opens at Brooklyn Bowl at London’s O2, and it’s a must see for both boxing fans and fans of greatness. 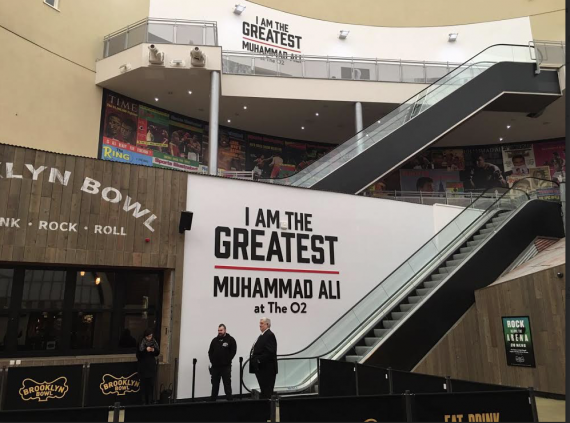 I was treated to a special pre-opening launch viewing and shuffled out, shadow-boxing afterwards on an inspirational high.
Its incredible that this is a celebration of a living legends life, as many of these exhibits tend to be put on posthumously after someone has passed away.
Here are xx reasons you won’t want to miss this:

1. Its boxing history.
The circular presentation room is full of incredible new, rare, personal memorabilia and artifacts from the biggest Ali fights. Medals, trophies, replica belts, archive photos and film, personalised robes, fight contracts, letters and more. All these have been sourced from across the world from fight fans, friends, collectors and the Ali family legacy. Photos and quotes from his big fights with Frazier, Foreman, Cooper and more are on show. My favourite room was the screening room where you can sit inside or outside a boxing ring to watch back numerous, fascinating video clips of Ali’s journey in his heyday. You leave feeling you’ve just shared quality time with an icon. It’s emotional to consider how much this man has seen, endured and left to us as a legacy. 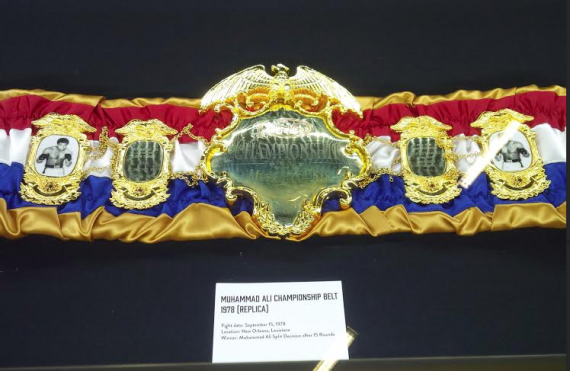 2. It has the Ali family co-sign.
A huge bronze statue of the great man stands centre-stage and each room that sits on the room’s circumference showcases a special era of his life. Ali’s wife Yolanda ‘’Lonnie’’ Ali herself came in to oversee the whole room and give the exhibition her blessing. (I wondered if she wished that more of Ali’s paraphernalia were still in her family’s possessorship) 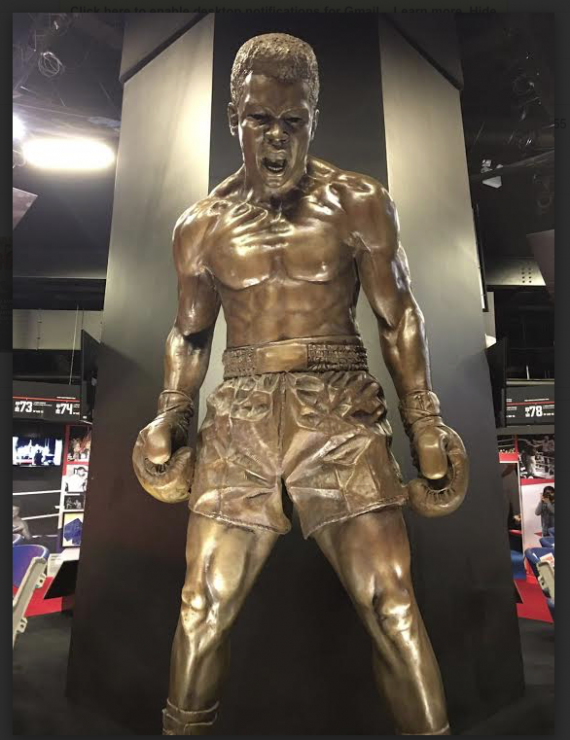 3. His quotes are now the stuff of myth and folklore.
There are brilliant quotes from the man scattered and blown up everywhere, that are just as relevant today as they were way back when he first stated them. (In fact, I think that a DJ should mix all Ali’s quotes into a house beat. We’d surely all use it for gym and life motivation). 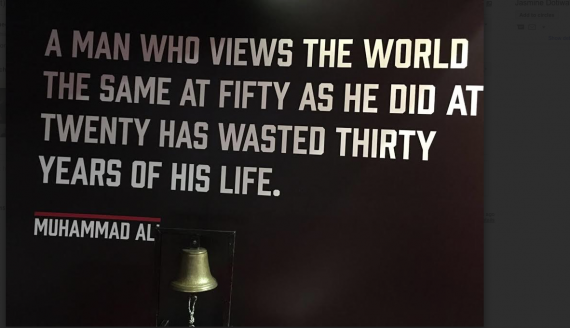 4. He told us #AllLivesMatter.
There’s one room that some may find uncomfortable being in. I called it the #blacklivesmatter room. This room is full of quotes and film footage from his time speaking, fighting for and bringing awareness to not just the black community’s causes, but freedom for all of mankind. The films in this room show amazing old archive footage from marches and demonstrations with MLK and Malcolm X during the time of segregation. Changing his name from Cassius Marcellus Clay Jr to Muhammad Ali because he didn’t want to keep the name that the white man had given him is highlighted.
There are also a few quotes about his dedication to Islam and Allah, which made me wonder whether if a boxer had said them today, would he be considered a terrorist? 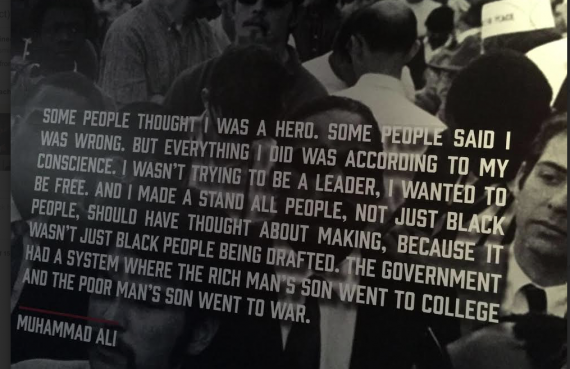 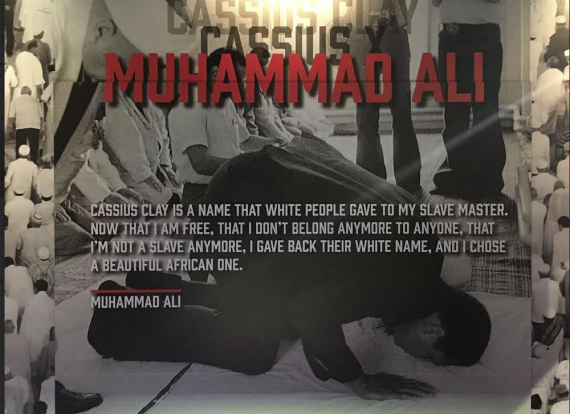 5. He was a heavyweight in and out of the ring.
When he was drafted to fight for his country he refused and told media ‘’you think this is about two choices; go to prison or fight. But there is another choice – get justice!’’ Which led to the quote ‘’ my conscience won’t let me go shoot my brother, or some darker people, or some poor hungry people in the mud for big powerful America. And shoot them for what? They never called me nigger, they never lynched me, they didn’t put no dogs on me, they didn’t rob me of my nationality, rape and kill my mother and father. … Shoot them for what? How can I shoot them poor people? Just take me to jail’’

6. He had fashion swag
Ali had the swagger of a rapper way before Liberace and Puff Daddy rocked bling. There were personalized, branded dressing gowns and clothing on display as well as shots of him with his pal Elvis, who had also lent Ali some of his blinged out suits and gowns for public occasions. 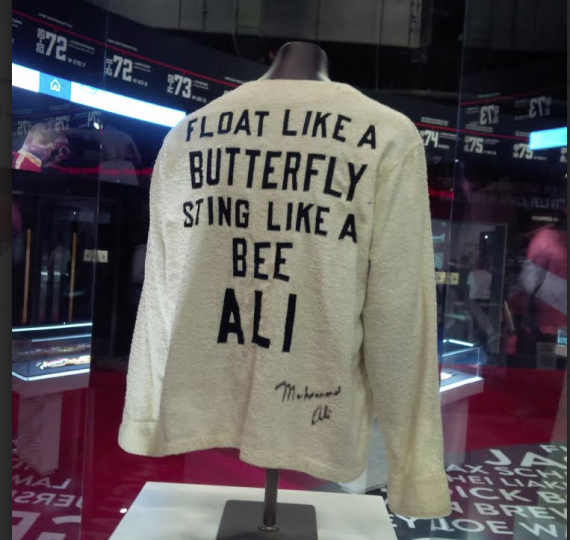 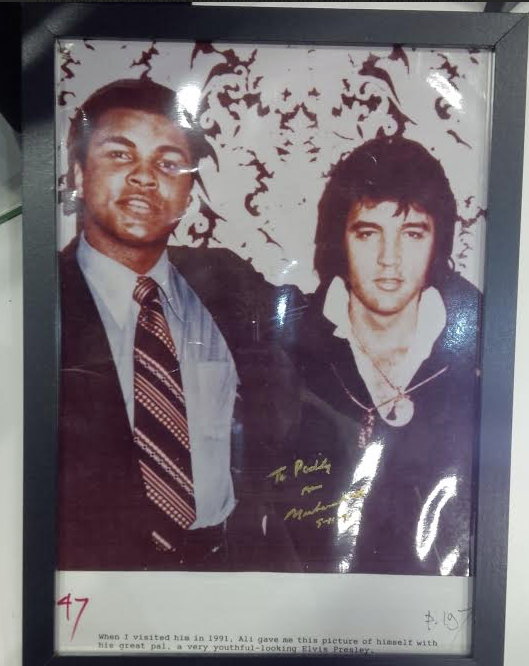 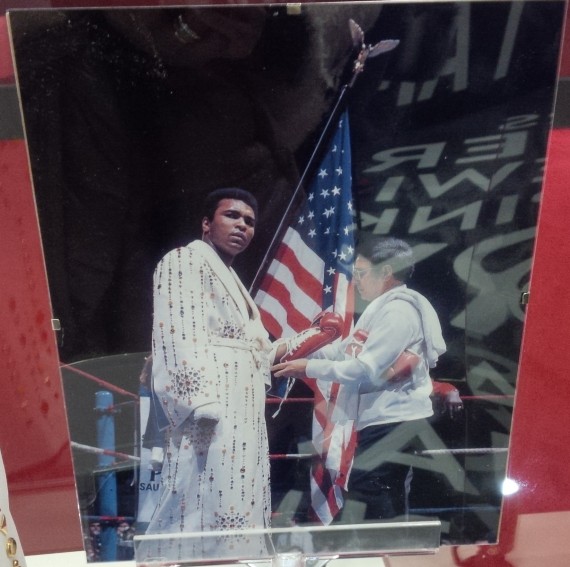 7. Ali was a lyrical poet before rap was an actual thing.
Not only did Ali already have the pompastic hip-hop posturing in dress, but also he was magniloquent in rhyme with his now infamous quotes. In his early days he was known as ‘’The Louisville Lip’’. He had a hype-man to bounce off in some media interviews, but was also more than capable of being his own hype-man, as seen on many an occasion when he blustered all the way from his dressing room to the ring. His lyrical dexterity was more bragadocious than Busta Rhymes and his sidekick Spliffstar. Check his ode to Sonny Liston;

Clay comes out to meet Liston and Liston starts to retreat,
if Liston goes back an inch farther he’ll end up in a ringside seat.
Clay swings with his left, Clay swings with his right,
Look at young Cassius carry the fight
Liston keeps backing, but there’s not enough room,
It’s a matter of time till Clay lowers the boom.
Now Clay lands with a right, what a beautiful swing,
And the punch raises the Bear clean out of the ring.
Liston is still rising and the ref wears a frown,
For he can’t start counting till Sonny goes down.
Now Liston is disappearing from view, the crowd is going frantic,
But radar stations have picked him up, somewhere over the Atlantic.
Who would have thought when they came to the fight?
That they’d witness the launching of a human satellite.
Yes the crowd did not dream, when they put up the money,
That they would see a total eclipse of the Sonny.

8. He was comedic, raw, and boastful as hell.
Ali is the only real life Rocky and the king of grandstanding ‘’I trained new for this flight. I tussled with an alligator. I told all of my critics. I told you all, that I’m the greatest of all time! If you wanna know anything about boxing, you come to Muhammad Ali!’’ He once said after one of his last fights ‘’It’s befitting that I leave the game the way that I came in. Beating a big man. I’m better now, I’m experienced now! Baam! Sucker you ain’t nothing, you ugly!’’ I’m not the greatest; I’m the double greatest. Not only do I knock ’em out, I pick the round. 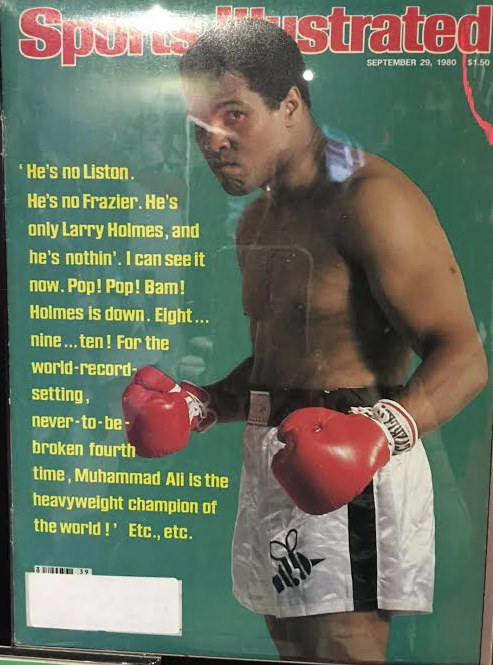 9. He has the biggest personality a boxer ever had.
Love the dedication and willpower of boxers today from Floyd Mayweather, to Tyson Fury, David Haye and more but seriously they’re all like wet blankets compared to Ali who wasn’t all mouth and no action like many today. Ali brought the chat, hoopla and knockout.

10. He always has the last word.
This is what he told David Frost in 1974. David Frost: What would you like people to think about you when you’ve gone?
Muhammad Ali: I’d like for them to say:
He took a few cups of love.
He took one tablespoon of patience,
One teaspoon of generosity,
One pint of kindness.
He took one quart of laughter,
One pinch of concern.
And then, he mixed willingness with happiness.
He added lots of faith,
And he stirred it up well.
Then he spread it over a span of a lifetime,
And he served it to each and every deserving person he met.