You may have noticed #TeamUK have been bombarding social media with news about a variety of new ITV2 show commissions and pilots recently…
Well, here’s the 411… ITV2 has commissioned a raft of comedy and comedy entertainment one-off shows, which have been hitting screens this month, featuring new talent on and off screen.

We all know over the past couple of decades how difficult it is to get any diverse programming content supported by British mainstream TV players.
Well ITV2 seems to be making a positive, non-patronising, genuine change this month, although only time will tell whether this is a box ticking exercise or whether they are taking it seriously. As it stands now, I’m pretty impressed. 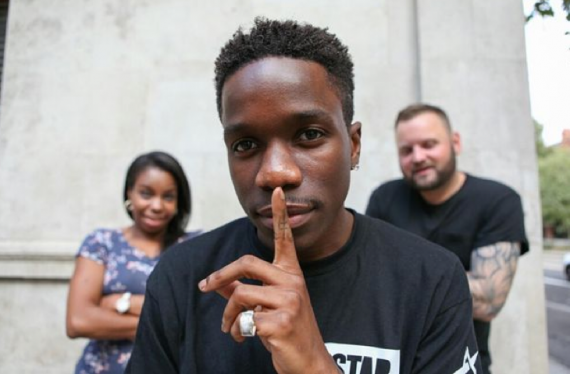 The four, 30 minute comedy and comedy entertainment shows that have been commissioned by Entertainment Commissioning Editor Asif Zubairy and Director of Digital Channels and Acquisitions Angela Jain, to air in the run up to the MOBO Awards this week, on ITV2 all include some of the most prominent players on the urban, young comedy scene.

This weekend saw All About The Bants, a hidden camera comedy show air, very confidently presented by music star Tinchy Stryder. AATB see’s a host of rising stars cause mischief and mayhem for unsuspecting members of the public, including two cocky estate agents. Its basically like MTV’s Punke’d and Beadles About with Jeremy Beadle from the eighties and nineties. Tinchy’s cast are strong, memorable and diverse in ever way. The kind of team that i can image will all have their own standalone shows in the future. 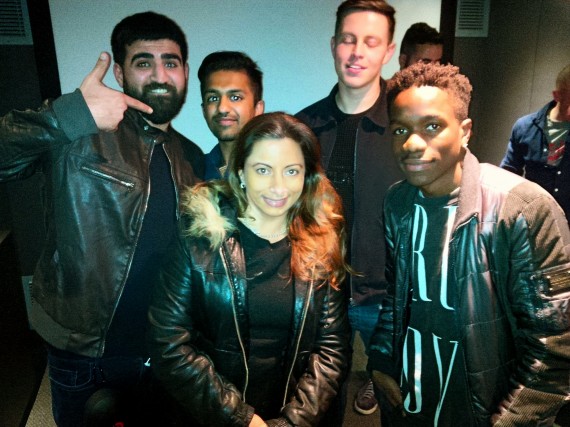 All About The Bants sees hidden camera pranks meet lad culture. Accompanying Tinchy, the show features an all-star cast including Facebook prankster Arron Crascall helping execute pranks on unsuspecting twenty-somethings across a number work and leisure locations. Directed by Atul Malhotra (Tricked, Man Vs Expert, Breaking Magic), All About The Bants is executive produced by Dhanny Joshi and Thomas Stogdon of up and coming BAME indie Big Deal Films. 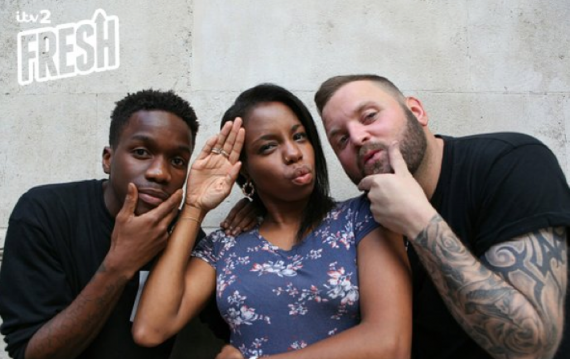 I caught up with Tinchy Stryder, and All About The Bants Executive Producer – Dhanny Joshi – this weekend to hear just how a grime star had made the transition from music to TV hosting.

Tell about all about the bants and what it was like turning your hand from music to TV hosting?

All About The Bants is our take on making a hidden camera show and flipping it on its head a little with riskier and edgy pranks. Yeah there was an obvious difference going from music to TV, but it was really just about being myself and having fun. I had to adapt to the situation & challenge myself, so I just embraced it you know.

What was your favourite sketch to film?

I would have to go with the Shisha lounge (with the bad waitress). Too much jokes, when you see people looking all-uncomfortable, not knowing where to look. Got tense at times.

I just think we’re making a show that’s in line with youth culture. Like people these days go to shisha places to relax so why not prank someone at a place where people really go to? Same thing with the estate agent prank – I think everyone knows that young and cocky agent so we thought it would be good to prank one. I just think it’s about time there was a hidden camera show that’s relatable to this younger audience. Whether that’s through the pranksters we’re involved or us doing riskier pranks we do that you might not see on another channel.

What did we not see on-screen that didn’t make the cut cos it was too outrageous?

We did a prank outside involving an actress asking guys to post for a picture with her for her fake portfolio. She flirts with them a little and then you see the men flirting back. This one guy didn’t see the funny side after the actress told him it was a joke and it all kicked off. He grabbed the cameraman by the throat and screamed down at one of the runners. It was a little mad.

Do you remember Beadles About- the 80’s middle-aged version of the show; you’re the 2015 version of Jeremy Beadle? 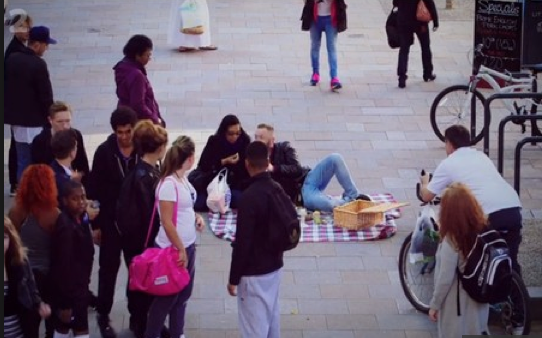 Tell us how AATB was born, inspired, early life, how did you source and bring the talent together?

AATB came from us wanting to see a hidden camera show that spoke to us. Most hidden camera prank shows are made for a family friendly audience and we wanted to watch something that had more edge and banter to it so we came up with the concept of hidden camera meets lad culture. We liked Tinchy and approached his team and their humour was equally as warped as ours and they were totally up for it. The commissioners at ITV2 really got where wanted to go with it and greenlit it. From then we just approached talent that we’re fans of and we knew they would be able to deliver.

Are ITV2 simply ticking a diversity box around the end of black history month?

I don’t believe they’re trying to tick a box but I do think they’re aware that giving opportunities to a diverse off screen talent can only be a good thing. You’ve got the Mobo’s coming up and credit to the channel – they’ve used it as an opportunity to give a platform to companies to show what they can do in the TV. I think the topic of diversity is part of an ongoing larger conversation, but we’re grateful to the channel for putting their neck out – and money – for a relatively new company like ours, BAME or not.

What were you keen to avoid in ‘’urban yoof culture’’ with this show?

We didn’t try to avoid making any type of show. I just think if it’s funny, it’s funny. We wanted to make a show that was representative of what we feel young people might enjoy and between Arron Crascall, London Hughes and Psychomar, there’s content in the show for everyone.

What was Tinchy like to direct and work with?

Tinch really was a pleasure to work with. He took direction well and was more hands on with his own thoughts of how some of the pranks or scenes could be which was quite refreshing. He was a real member of the team and it made for a great working atmosphere especially on the long filming days.

How well do you think the Uk’s main TV broadcaster- The BBC – represent youth and urban programming content?

I think they’re trying. Within our first year they’ve commissioned two projects from us, which heavily feature diverse contributors and stories so I can say that I’m seeing an active effort to want to reach out to wider communities. I think they were smart to recruit commissioners from diverse backgrounds as the wider perspectives – be it urban, youth, LGBT, disabled and so on will hopefully be catered for if there’s someone in the channel knows their world.

What’s next for AATB?

We would love to turn this into a series, as there’s so much scope to take the jokes further. Once we finished filming we had another thirty ideas for pranks we could do. The main thing for us is we’ve made a show we can be proud of, and if the audience likes it then we’ve done our job. Whatever happens after that is the channel’s call. 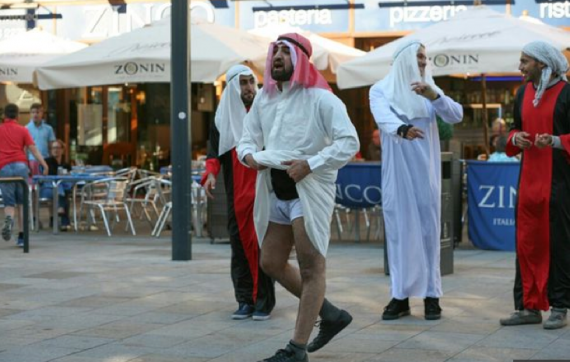 OTHER SHOWS IN THE ITV2 NEW RAFT INCLUDE;

The Ty and Ky Show is a sketch show made by new production company Unstoppable Inc, starring the talents of dynamic duo, Cousins Tyrone-Lee Davis and Kieran Shekoni (aka Ty and Ky). The Ty & Ky Show is a collaboration with Release The Hounds series director James Abadi and Marc Allen, who is also Managing Director of True North, (aka Jy & My), and has influences from a diverse range of shows from Little Britain to David Chapelle.

WeHustle Productions, the makers of footballer Ian Wright’s seminal auto-biographical documentary Ian Wright: Nothing to Something (ITV4) are proud to be joining forces with ITV again to produce The Comedy Basement for ITV2. The Comedy Basement will feature the sharpest, cutting edge black British comedians including Kojo and Eddie Kadi. The programme will explore and demonstrate the wealth and depth of comedic talent in Britain’s vibrant black community. The Executive Producer is Richard Botchway.

C4 backed indie Renowned Films has also been commissioned by ITV2 to produce a 1 x 30 comedy special, completing the set of singles. The show, entitled Pranksterz will feature a brand new cast of up and coming Black and Asian comics, as they hit the streets in a mix of fast paced provocative hidden camera and character based pranks poking fun at prejudices and stereotypes around race and diversity in the UK.

Angela Jain said:
“It has always been a cornerstone of ITV2’s strategy to work with new talent and these shows are the perfect opportunity in the run up to the MOBOs, to bring some funny stuff to the telly from some people new to telly.”

Asif Zubairy said:
“There’s a wealth of talent in the UK – plugging away, trying to get TV attention. It’s exciting – and quite right – that that they, and hopefully others in the future, will get on ITV2 for the benefit of viewers who can expect funny, edgy and different ideas from whoever’s got the best ones.”