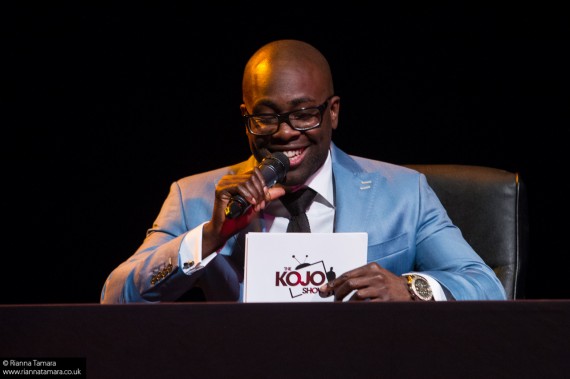 Radio host Kojo sold out the Hackney empire for his show titled The Kojo Show and entertained a packed theatre of people with comedy sandwiched between celeb interviews with Noel Clarke, Derek Chisora, Kanya King and Ricky Norwood aka Eastenders Fat Boy. 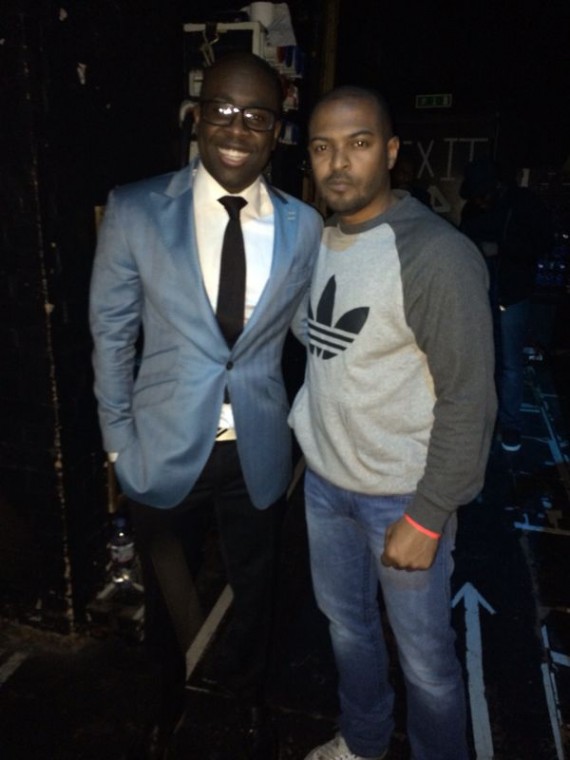 But the best guest had to be the newest panellist to Loose Women (and about time too) Jamelia. She wowed the audience with effortless whit by talking motherhood, her new TV role and having to rein in her “ghettoness” for the mid morning viewer. There is something so classy and funny about her, maybe it’s her honesty and lack of show business that makes her so appealing. 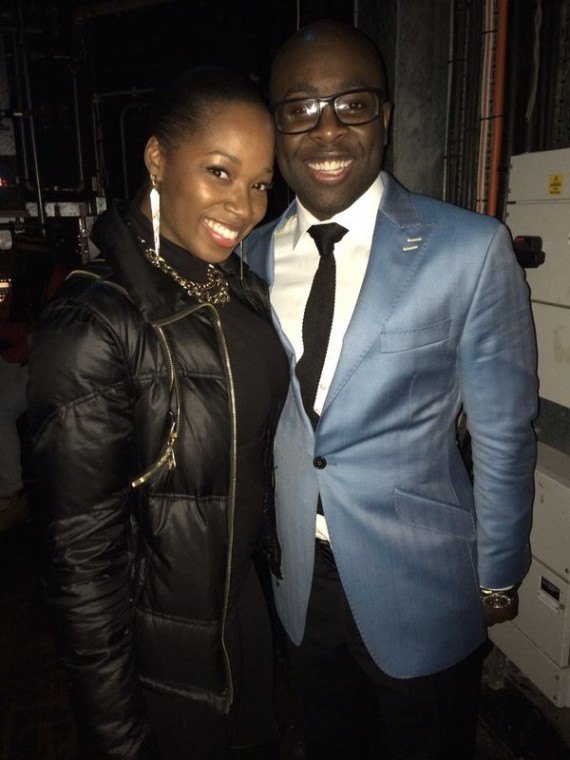 She had the audience in stitches when asked why she’d recently turned down nearly every reality TV series under the sun she said: “Kojo you know me, you know what I’m like, and while I’m always myself I can’t risk the public spending 24 hours with me, you’ve seen the Big Brother house, you’ve seen how they don’t wash the chicken? If I was there with them doing that, I just can’t!”

When Kojo asked her how long we’d have to wait till she says the words rass and clart on daytime television she nearly fell of her chair. “Stop it, I have to try extra hard not to do that,” she said, and more seriously was proud to address the gap in the shows previously very white panel. “Its nice to be speaking for a large part of the audience, you know we all watch the show but we haven’t had a voice before, and now through me we do. That is progress.” 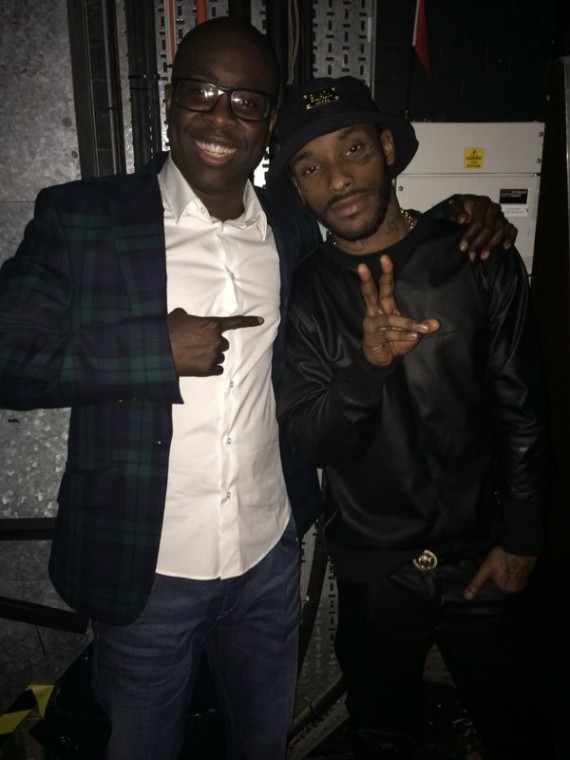 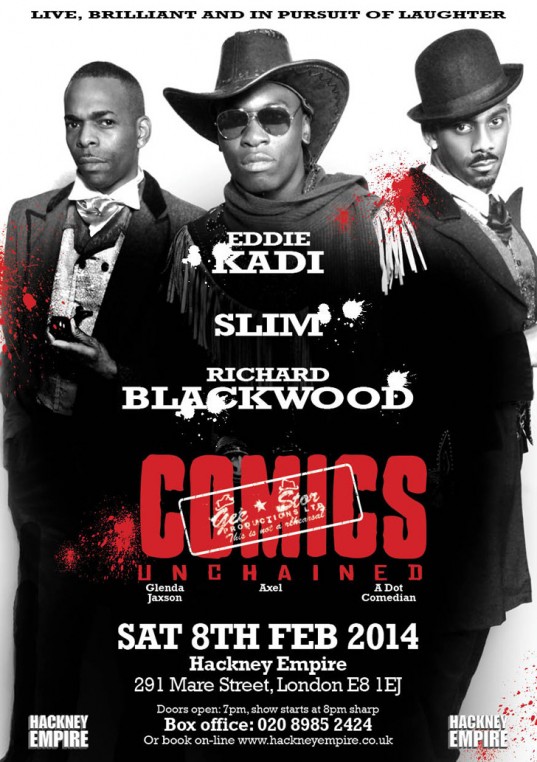 Next I caught up with the stars of the COMICS UNCHAINED show, which is happening at Hackney Empire on Saturday 8th February (next Saturday!). Three of my fave British comedians headline this incredibly strong line up (which also includes other acts too). Slim, Richard Blackwood and Eddie Kadi lead the way!. What a line up – certainly not one to be missed.
I hit them with my quick-fire round of questions, (which as you can imagine), they took totally seriously- not!

QUESTION 1- this past few months and next year, films themed around black oppression seem to be very popular. We’ve had D’Jano, The Butler, Mandela, 12 years a slave etc- if there were a black oppression movie about YOUR life, who would play you and what would it be called?
RICHARD BLACKWOOD ‘‘a black movie about my life would be called The Road Less Travelled and I would play the Narrator plus the lead!’’
SLIM ‘’ it should have been Michael Jackson – Beat It’’
EDDIE KADI ‘’It would be called “I am so Fresh” It would be about being accepted regardless of my Identity and I would choose John Boyega to play it, as he is young and energetic. And good looking of course! ‘’
GLENDA ‘‘my block buster would be called AGE IS JUST A NUMBER, & it would be played by OPRAH’’.
AXEL ‘’Mine would be called 5 years of comedy…. Unchained. I would obviously be the main character in the movie but I don’t die or get shot at the end’’
A DOT COMEDIAN ‘’Will Smith, because he is one of the homeboys and he can relate to me. I would call it the struggles of adotcomedian’’ 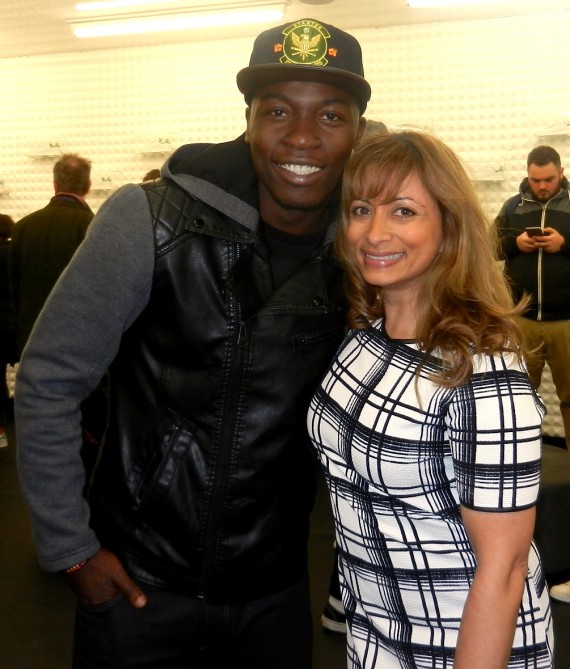 Question 2- CELEBRITY BIG BROTHER 2014- what did you make of the Evander Holyfield gaygate drama?
RICHARD ‘’ I feel Evander dealt with the Gay drama the only way he knew how. It’s a very touchy subject when your dealing with Born again Christians and their views on Gay relationships so I don’t think it should of been aired at all!’’
SLIM ‘’ I can’t knock Evander I’m a boxing man and he is one of the all time greats. You have to be very careful talking about homosexuality as anything you say can be construed negatively by those who wish to do so, but in my opinion each man to his own’’
EDDIE ‘’Unfortunately I have not been keeping an eye on BB…So I can not comment…’’
GLENDA ‘’ Evander said how he felt, like Berni Mac said, I’m saying what you want 2 say,:)’’
AXEL ‘’ To be fair I didn’t see it I only heard about it, so I researched on YouTube…I’m used to hearing older black men talk about homosexuality like that, and he was just voicing his opinions. I got no problem with that, id rather hear him talk about that then him talk about how much of a great boxer he was….KMFT’’
ADOTCOMEDIAN ‘’ Celebrity Big Brother is not my thing; I don’t watch those type of shows. So I’ll will pass’’.

Question 3-CELEB BIG BROTHER 2014- who’s the bigger plonker Dappy or Lee from Blue?
RICHARD ‘’ I know them both so no comment!!’’
SLIM ‘’ Dappy. At least Lee has some swag and doesn’t let horses kick him in his face’’
EDDIE ‘’ All I can say to this is I am a big Dappy Fan! He is entertainment!! Is he a plonker?…Na na naiiiiii!’’
GLENDA ‘’ NOW when I ask the Youngsters about Dappy, the word plonker is not the word they use, starts with D, ends with head, just saying’’
AXEL ‘’ Dappy not because of his ignorant behaviour in the house…but mainly because his name sounds like a new brand of nappies’’
ADOTCOMEDIAN ‘’see above’’

3
Finally, If you’re suffering from winter blues or struggling through January desperate for payday, spare a thought for those without a home to call their own. Then imagine being young as well as homeless. You could be forgiven for giving up and having no hope. Thankfully one group of young people from One Foot Forward temporary accommodation in Oxford have decided that 2014 is going to be their year. I have spent a few days mentoring and getting to know some of these young people with media interests. So they are voicing their hopes, aspirations and resolutions for this year through song, rap, poetry and blog. Working with local organisation, Brand New Start, they are taking their homeless experience and turning it into positive expression through the Write Start project. And they are not afraid to tell it like it is in front of a live audience – first stop they will be showcasing their talent at Oxford’s largest indoor shopping mall so if you live in the Oxford area keep an eye out for them. It is amazing how creativity can thrive in such a depressing environment. One young resident has been in ‘temporary’ accommodation for almost 5 years. Along with the others on the Write Start project, he is learning top writing tips, working in collaboration with his peers and going to shows and events that inspire creativity. They have the chance to get a qualification at the end of the project and that makes him one of the lucky ones…count your blessings if you have family, friends, a roof over your head and most importantly –feel safe!