This week I was invited to an early, special-screening of the new Miles Davis biopic Miles Ahead, and came away feeling inspired by this film that focused not on his life, legacy or chronological narrative, but the story of just two crazy days in his life. It’s everything we like to think a Rock n Roll music stars life is like 24-7. 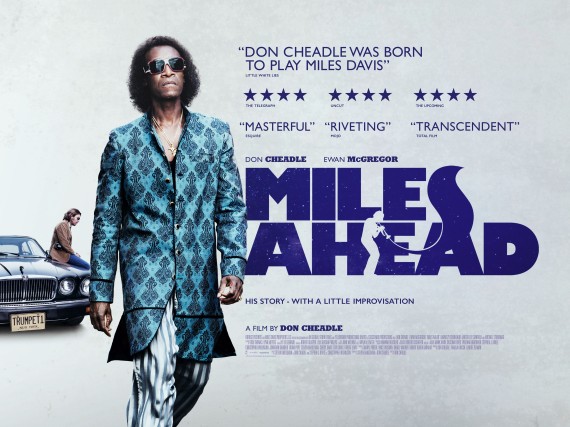 Miles’ album Kind Of Blue is the best-selling album in the history of jazz music but In the midst of a dazzling and prolific career at the forefront of modern jazz innovation, Miles Davis (Cheadle) virtually disappears from public view for a period of five years in the late 1970s. Alone and holed up in his home, he is beset by chronic pain from a deteriorating hip, his musical voice stifled and numbed by drugs and pain medications, his mind haunted by unsettling ghosts from the past.

A wily music reporter, (the things us music journo’s do to get interviews!) Dave Braden (Ewan McGregor) forces his way into Miles’ house and, over the next couple of days, the two men unwittingly embark on a wild and sometimes harrowing adventure to recover a stolen tape of the musician’s latest compositions. Miles’ mercurial behavior is fueled by memories of his failed marriage to the talented and beautiful dancer Frances Taylor (Emayatzy Corinealdi). Miles was married many times but it was during his romance and subsequent marriage to Frances that she served a s muse to his music. It was during this period that he released several of his signature recordings including the groundbreaking “Sketches of Spain” and “Someday My Prince Will Come.”

The idyll however, was short lived. The eight-year marriage was marked by infidelity and abuse, and Frances was forced to flee for her own safety as Miles’ mental and physical health deteriorated. By the late ‘70s, plagued by years of regret and loss, Miles flirts with annihilation until he once again finds salvation in his art.

The film seems to operate on two speeds. The present scenes are fast and dangerous, while his past is cooler, more controlled and often romantic.

Here’s what the film made apparent to me:

ITS IMPORTANT TO GET A FAMILYS CO-SIGN WHEN PLAYING A LEGEND.
Don Cheadle explained how he became involved with the film ‘’Over the years I was approached by various people, some of whom were close to Miles and others who just wanted to see a movie about him; and they said that if anyone should play him it was me. I’d already been in a number of standard bio-pics and I had no interest in making another since I found them full of contrivances and fabrications. You know, “based on a true story.”
Shortly after Miles was inducted into the Rock and Roll Hall of Fame I was approached by his family. They pitched me several different takes but I didn’t spark to any of them. To me, they didn’t go far enough in trying to capture his enormous creativity and dynamism. So we shook hands and promised to keep in touch. As I pondered it further, I began to imagine a film that would capture Miles as who he was, a man full of drive and forward momentum but also mercurial and dangerous, the real O.G. original gangsta. And I realized that it would never happen unless I wrote it. So I asked the family if they were okay with that and they said “Cool. Do it.”

GETTING FILMS MADE IS TOUGH. GETTING FILMS MADE ABOUT BLACK CHARACTERS IS TOUGHER, BUT CROWD FUNDING HAS MADE THINGS POSSIBLE!
Over the years we’ve all heard about how tough it is to make films about or with black characters. After several setbacks including one of the largest recessions in global history, Don Cheadle’s MILES AHEAD finally locked down partial financing before turning to IndieGoGo to raise the funds to make up for the shortfall. “It actually felt right that we used a social platform to complete the film” observed Cheadle “since Miles was someone who made social music’’.

YOU DON’T HAVE TO KNOW ABOUT JAZZ OR MILES TO ENJOY THIS FILM.
In 2006, Miles was inducted into the Rock and Roll Hall of Fame, which recognized him as “one of the key figures in the history of jazz”. In 2009, the US. House Of Representatives passed a symbolic resolution recognizing and commemorating the album Kind of Blue on its 50th anniversary, “honoring the masterpiece and reaffirming jazz as a national treasure”. So, just so you get it, he was a pretty big deal in music full stop.
However Film Producer Pamela Hirsch reassures us ‘’MILES AHEAD is engaging and enjoyable purely as filmmaking a treat both for aficionados of Miles Davis’s life and music as well as audiences who know very little about him “Don has created a film that is truthful to Miles ’spirit, film he would have starred in. He was a complex character who lived a fascinating life and it’s all in there”.

MUSIC GENIUS’ LIKE TO STRAIGHT TALK, BUT ARE EASILY SUCKED IN BY THE DEVIL.
MILES AHEAD, inspired by events in his life, is a wildly entertaining, impressionistic, no-holds barred portrait of one of 20th century music’s creative geniuses, featuring a career defining performance by Oscar® nominee Don Cheadle in the title role, however it really shows that Miles embodied a very multi-layered personality that was hilariously funny, shot from the hip and suffers no fools. Yet like most musicians I’ve met, at some point during their careers, the escape-haven of drugs, alcohol, smoking and party life takes a hold, both spawning classic enhancing music and killing their souls simultaniously.

MUSIC STARS ARE ALWAYS UNDER THEIR RECORD LABEL MASTERS THUMB.
More recently pop star Kesha has been all over the news accusing her record label of mistreatment of various kinds, like hundreds before her including Michael Jackson and Prince. Miles’ story shows that this is an age-old story. Whatever ethnicity or music genre you are from, the music star is always beholden to the record label master. The film underlines a record labels pressure on music acts.

MEN CAN MULTI-TASK! DON CHEADLE PLAYS THE PERFORMANCE OF HIS LIFE AND DIRECTS THE FILM TOO!
Written by Steven Baigelman & Don Cheadle, the film and its very small cast is also directed by Don Cheadle. The film shows that a typical day in the life of Miles was chaotic yet calm, lonely, full of despair, yet surrounded by people that just wanted a piece of him. Miles Ahead is beautifully shot and very cleverly edited with a simple, yet slick, repetitive edit style, in the way that it jumps from scene to scene, from the past to present and back again.

IF YOU’RE GOING TO PLAY ONE OF THE BIGGEST MUSICIANS OF ALL TIME, YOU’RE GOING TO NEED TO BE ABLE TO ACTUALLY PLAY A TRUMPET LIKE A PRO.
Don told us ‘’As a kid, back in fifth grade, I played the alto sax and I would listen to people like Charlie Parker and try to figure out how they were playing. It was much easier then to slow down a 78 record on a hi-fi to 33. Once I committed to learning the trumpet for the film, I played every day and still do. I’ve become completely geeky about it. I’d say I’ve gotten to the level of a good ninth-grade trumpet player.
The trumpet is a completely different instrument but it makes more sense to me than the sax. I understand the octaves and arpeggios better, but maybe that’s the benefit of being 48 and not 18. I watched film and video of Miles and I also had seen him perform in the early 80s shortly after the period in the film’’.

THERE ARE AT LEAST FIVE FEATURE LENGTH MOVIES THAT COULD BE MADE ABOUT MILES DAVIS’ INCREDIBLE LIFE. DON TELLS US WHY IT TOOK SO LONG TO MAKE JUST ONE?
‘’A big reason is that jazz has been swept into a corner and no longer seems to have relevance to a modern audience. Miles still has great name recognition and “Kind of Blue” still sells more than 50,000 albums a year. But while most people I asked recognized that he was a jazz musician, they didn’t know he played the trumpet and many confused him with Dizzy Gillespie. ‘Oh yeah, you mean the guy who blew out his cheeks.’
Miles’ music is not immediately identifiable like some oldie rock hit. You can’t sing it. It isn’t over in three minutes. Unless people hear it on the radio, they have no connection to it. Another reason is that music appreciation is no longer taught in public schools’’.

MILES DAVIS AND HIS PEERS EMBODIED THE EARLY ELEMENTS OF THE GENETIC HIP HOP BLUEPRINT DNA.
The youth of today loves a variety of music with hip-hop being a dominant genre. Miles was an American jazz musician, trumpeter, bandleader and composer widely considered one of the most influential and innovative musicians of the 20th century, and before rap existed he was already doing sampling in his music, the only difference is that it was analog instead of digital. Miles epitomises the definition of ‘Swagtastic’ with his verbal slanguage, his over the top leery clothing and his deeply emotive sounds.

MILES DAVIS WAS AN UNDENIABLE DON. NO OTHER EXPLANATIONS NEEDED.
*DROPS MIC*

Miles Ahead is released in UK cinemas on April 22nd 2016.