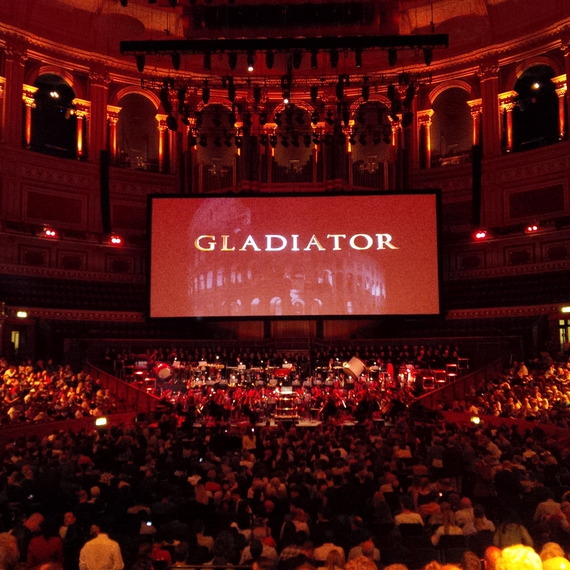 Picture the scene; He says ”get yourself ready, we’re going to see a movie”. I ask which one, and then inform them confusedly that I’ve seen Gladiator (a million times). They reply with a wink ”not like this you haven’t”.

They were right. This was a screening of Ridley Scott’s historical epic classic movie at an incredible location, with live band playing the films soundtrack. Not just any band, location and experience either. It was at the Royal Albert Hall, with the movies every musical note played live by the Philharmonia Film Orchestra!

When the 100 strong Philharmonia Chorus rose and sat en masse it was magical watching them converse with the Film Orchestras strings, percussion, bass and synthesizers to recreate the film soundtrack.

For those who’ve never experienced this gigantic screen genre ( which made Russell Crowe look even more ruggedly handsome) ,with tops and tails band vibe, it’s nearly impossible to verbalise how amazing the live experience is. But I’ll try.

You may imagine that it would be difficult to view a movie and give equal acknowledgment to a live orchestra simultaneously, but its not distracting at all. If anything it adds to the whole enchanting vibe.

The live orchestra- seated en masse beneath the humongous screen – make the movie so much more dramatic and haunting as they raise their respective instruments to the conductors command as the drama unfolds. In fact, Its actually better that you know the movie well as an audience member, because as a dramatic sequence approaches, your eyes flick in anticipation to the American composer/ conductor – Justin freer – knowing he’s about to make the heavens rain down with brutal and beautiful musical war and drama.

You really appreciate the composition of the sound track so much more and sit in awe of the two genres synergy playing out before your eyes. It also makes you focus more on what the film would sound like without the live music soundtrack as the film audio is turned down slightly with subtitles on screen whilst the music levels are much higher. It puts the talent of the soundtrack composers into real perspective. Every emotional wave that you are carried upon is driven not just by the storyline and acting but really steered and lead by the purity and immediacy of the music.

The music was scored by the legend Hans Zimmer and Lisa Gerrard. Zimmer, who’s scored over 100 films (including The Lion King and Rainman), grossing more than 22 billion dollars at the box office. Zimmer’s been honoured with Academy Awards, Golden Globes and Grammies, so to state that his body of work is impressive is an understatement.

The lavish experience of watching one of the most expensive films of all time with over 5000 fellow fans of the creative arts, all dressed to the nines, at such a fancy venue also adds to the very rich cultural occasion.

Also, the story of a general who became a slave, and a slave who became a gladiator played out onscreen in the round Roman Colosseum, was complimented by the fact that we were also experiencing the storyline in another regal, opulent venue – the Royal Albert Hall, with its cascades of balconies and in-the-round setting.

Writer, film music journalist and producer Michael Beek says ” a film as far reaching and visual as gladiator demands music that both supports the weighty needs of the action while at the same time gets under the skin and it’s the very soul of its central character. With Gladiator the music is more important than ever, with its plethora of exotic locations, immense battle scenes and complex characters. Film director turned film composer Hans Zimmer, had the luxury of visiting the set and soaking up its atmosphere long before he would normally start thinking about the music. Most music composers are usually given the finished film to work with”.

Like the old movie theatre’s, where there may have been an intermission, there is one here too, during which previously unseen behind the scenes footage, interviews and photos from the Gladiator set are played to the delight of zealous movie fans, who didn’t want to grab a fancy ice cream, glass of wine or champagne midway.

At the end of the movie, the orchestra continue to play to the endless credits, which really is fascinating, and a further moment to acknowledge just how much emotional dramatic affect the film soundtrack brings to the overall movie genre, before the audience gives them numerous, well deserved standing ovations.

Gladiator plays for four nights at the Royal Albert Hall- May 24, 26, 27 and 28, but if you miss these then there are other similar classic movies in this genre throughout the year.

Music from Titanic, West Side Story will have their dates as well as Tim Burton’s films like Batman, Alice in Wonderland and Edward Scissor Hands, takes place on December 12 2014.

However, the one I’m most looking forwards to be December 8 when The Godfather will play with live orchestra.

It really is a must do, at least once in your lifetime unique experience, and whether on a date or a night out with friends and family, you can be rest assured it’s a very stylish and unforgettable evening that will never be forgotten.