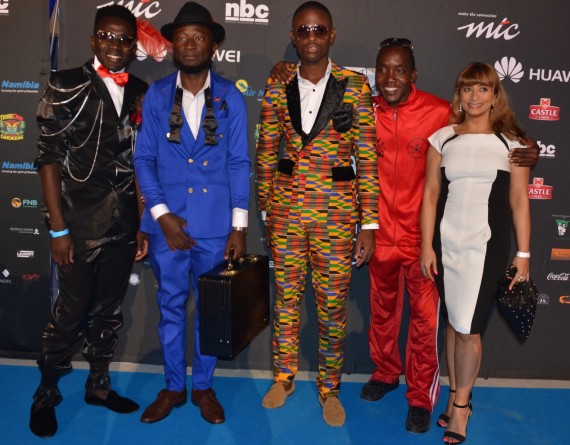 The vision that is sold to us westerners about Africa is always so far from the truth it’s a blatant lie.

With the press content we are brain washed with, the UK population wouldn’t be wrong to presume that 1) Africa is a country instead of a continent the way African countries in the are always lumped into stereotyped generalisations in the media. 2) That all Africans are poor, poverty stricken, destitute populations, in need of charity donations for which we westerners should indulge in the latest sponsored outrageous assault course of choice to help. 3) That Africans are all diseased, politically incorrect countries where naked children run barefoot through dry dusty dirt with dribbling noses and extended malnutrition-ed bellies. 4) That African countries are so far behind the rest of the world that generally we’d rather holiday anywhere but there, but if it’s a former English colony we may consider it. 5) That on the global world map it looks smaller than its true size when in fact it is much bigger. In reality, you can fit North America into Africa and still have space for India, Argentina, Tunisia and some left over. Apparently the distortion is the result of the Mercator map, which was created in 1596 to help sailors navigate the world. It gives the right shapes of countries but at the cost of distorting sizes in favour of the wealthy lands to the north.
Luckily, my late father was Kenyan and so these untruths were drummed into my mind at a young age whilst my west London school was still telling me about the ‘’poor Africans’’ in my sponsored walks. 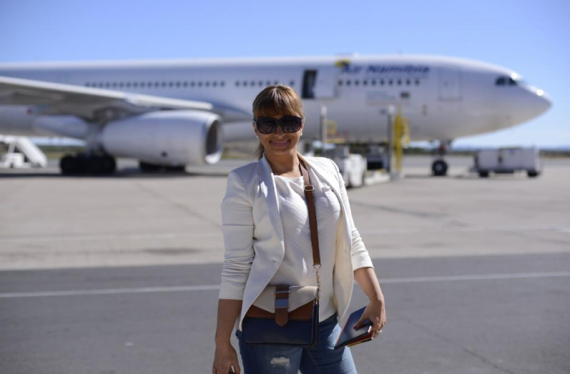 So it was with an open mind that I flew to Namibia this fortnight, in my capacity as one of the judges, for the forth Namibian Annual Music Awards (NAMAS) in the coastal town of Swakopmund – Namibia and Africa’s favourite holiday destination where the leadership of the Erongo region was hosting the awards. 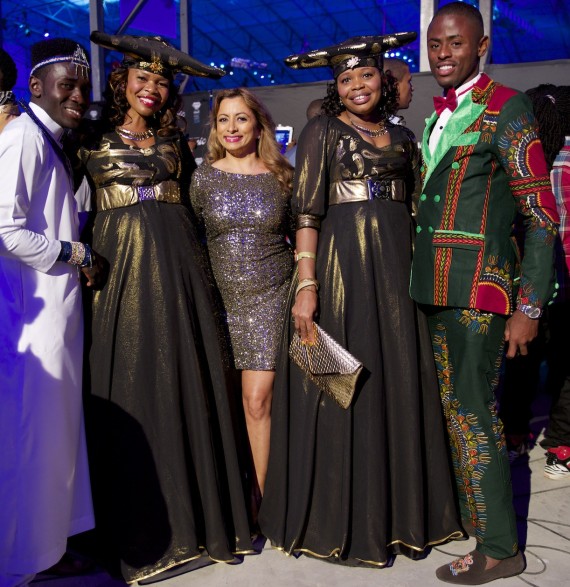 A REAL EFFORT IN THE GLAMOUR AND CULTURAL STAKES!

3 flights from Heathrow later arriving with packed planes full of Germans, my cameraman and I were very pleasantly surprised. There’s not too much online about Namibia as a tourist spot so we weren’t sure what to expect at all.
Unlike countries like Kenya, Egypt, South Africa and Nigeria, which we hear much about, Namibia is clearly Germanys best, kept secret (until my next blog when I tell you all about it as a tourist spot). 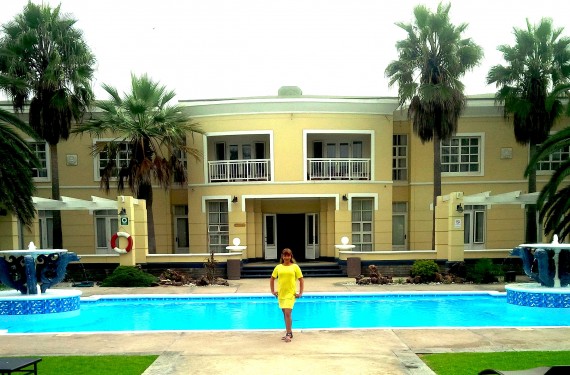 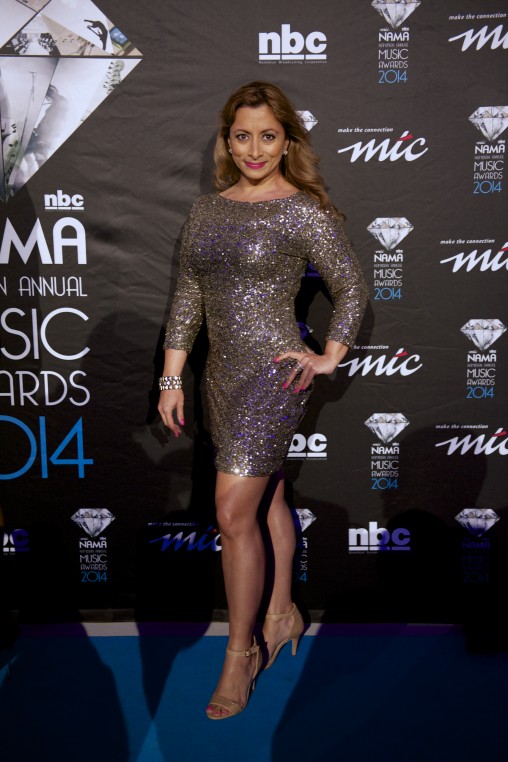 The NAMAS were for the first time being held outside of the main city of Windhoek at the Swakopmund Indoor Sports Centre, which is huge. NAMAs executive chairman Tim Ekandjo told me ‘’ after Windhoek, we felt it appropriate for the NAMAs to relocate to one of Namibia’s many other amazing hotspots, and following an extensive procurement exercise and expression of interest, the Mayor of Swakopmund, his worship Juuso Kambwehse, made the decision to host in Swakopmund this year’’ 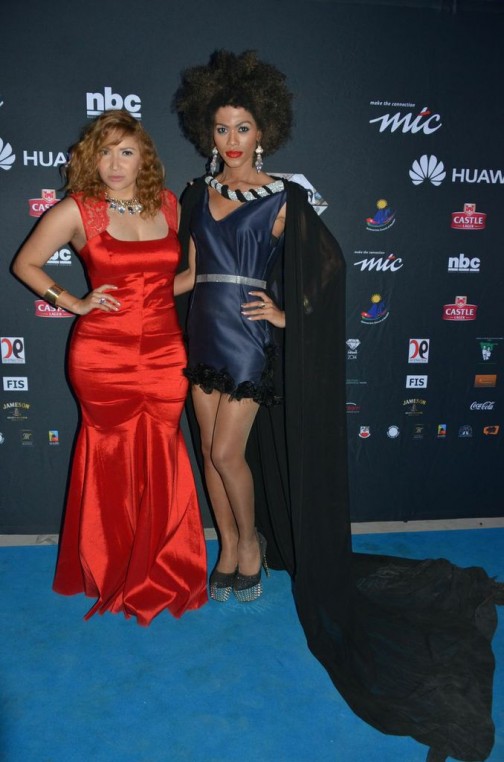 Impressively for any show, the NAMAs don’t allow backing tracking or lip-syncing so all performances have to be totally live. This sets a high standard with a little fun pressure for the performers and keeps live music alive. 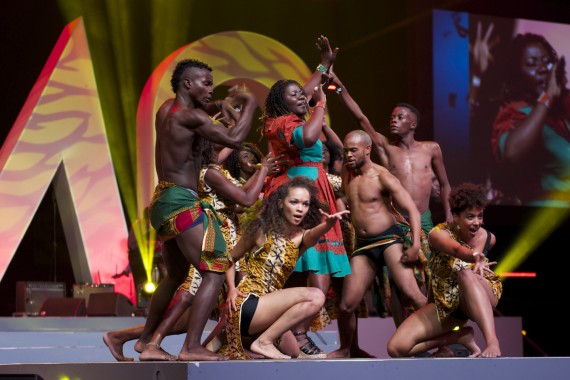 My fellow judges were Babafemi Olagbaiye – MTV Networks Africa and founder of One Music Network which broadcasts to 15 countries globally, Lee Kasumba – Head of Channel 0- a pan African music channel and Philip Nwanko – head of music and talent for Trace TV- Africa’s number one music channel. 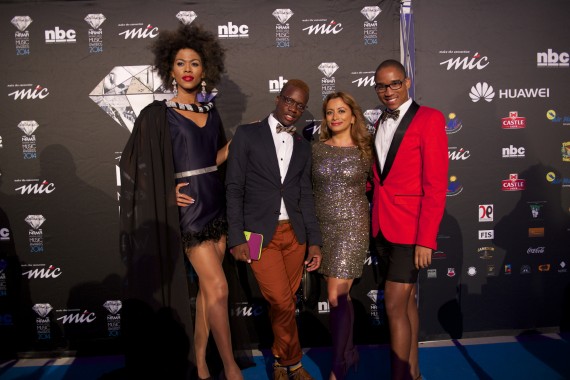 STYLE AND FASHION ON THE NAMAS BLUE CARPET

The calibre of acts catered to both young and old, so whilst you could see a Beyonce or Kanye style set it would be immediately followed by an older, more traditional set by a traditional dialect singing elder. 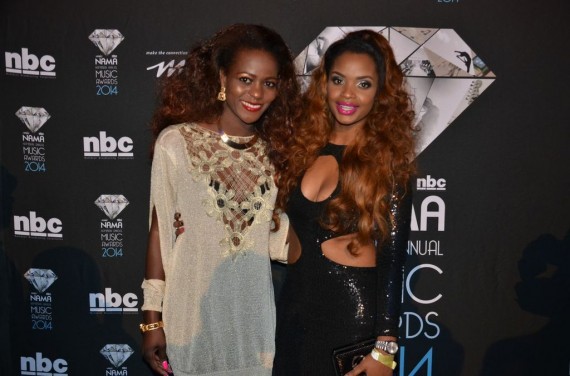 The awards ceremony was broken down into two separate days. Friday night was the VIP music industry only music industry awards which featured the more niche awards like best entertainment journalist , and the Lifetime Award honoured Axali Doeseb, the conductor of the Namibian National Symphony Orchestra and author of the Namibian national anthem, Namibia Land of the Brave. Doeseb received the Lifetime Achiever Award after the NAMAS Executive Committee nominated him for his commitment to the art of music.
Tim said ‘’we celebrate our rich history in music by paying tribute to all those who played a role in where we are today’’. 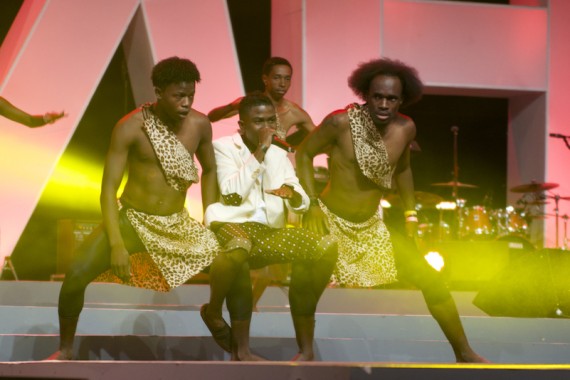 I expected this night to be a low-key big cocktail party style awards but it was in fact a full on production with numerous performances from big African names like Ms Lady May and the Shambo Queen, full laser light shows and audience dressed in full ball gowns and richly textured suits. 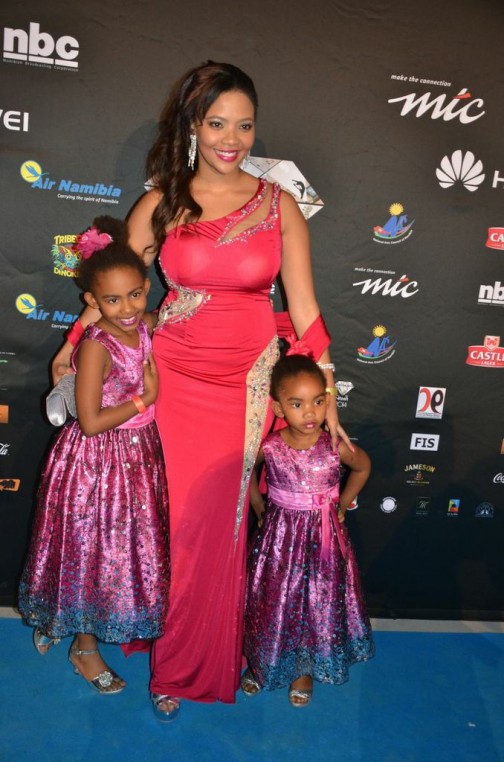 The main night was both eye opening and mind blowing. On arrival hundreds of excited guests were queuing outside in their very opulent glad rags to walk one by one through a single security metal detector. It turns out the Prime Minister was attending so security was crazy. Once through, the excited throng the blue carpet was totally unregulated and heaving with music stars, entertainments journalists, supermodels, fashion designers and more. 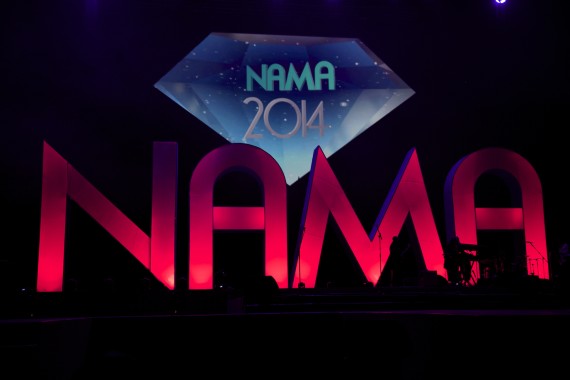 Interestingly there were no high-powered PR clipboard-wielding dragons managing the blue carpet. It was literally a free for all, that in the UK would be absolute heated pandemonium, but here it was a buzzing with positive energy, friendly faces everywhere, accommodating mish mash that worked. Enthusiastic fans took photos of the stars, audience took photos of themselves in front of the branding boards and not one area of the carpet was sectioned off for ‘the main TV crew/ VIP team’. No hierarchy.
Surprisingly whilst the country’s entire environment is fiercely protected for conservation and from poachers, many of the attendees were dripping in regal outfits made of animal skins, fur, feathers and more. 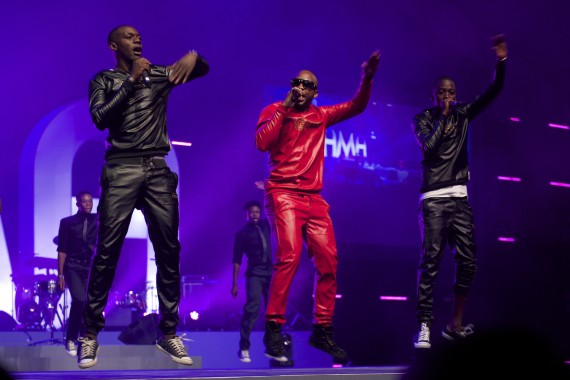 GAZZA HAD THE STADIUM UP ON ITS FEET AND SCREAMING IN JOY!

This main night saw performances from big hitter names like Gazza, The Dogg, Sunny Boy, Exit and Freeda. The performance variety showed versatility and potential for much growth show casing the best from the region.

Categories included the usual best female, male, single, song, album, but also Best Shambo, best Afrikaans, Best Damara punch, and Reggae amongst others. Winners of each category picked up prize money ranging from 20,000-50,000 Namibian dollars. 17 Namibia dollars to the pound, so still a huge financial incentive at between £1000- £3000 a win! The sponsor MTC even pay acts for performing at the ceremony, which isn’t usual across the west. 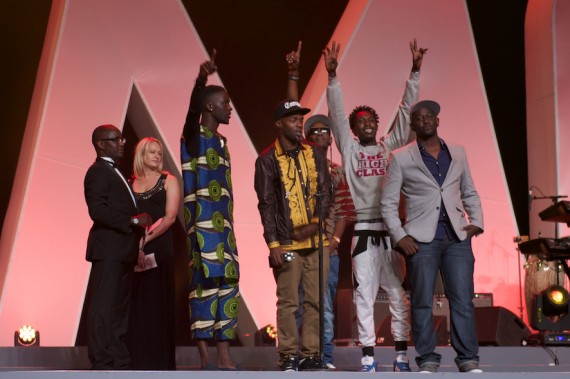 WINNING A NAMA IS VERY LUCRATIVE FOR REPUTATION AND BANK BALANCE.

All category winners walk away with a brand new Huawei P6 Smartphone. Female and Male Artists of the Year, Erna Chimu and Gazza, each walk away with N$50 000, a holiday for two at any of the NWR lodges, as well as laundry services to the value of N$10 000. In addition, they and the Album of the Year winner, Elvis se Seun, will perform at the TribeOne: Dinokeng music festival, the biggest of its kind in Africa. All other category winners take home N$20 000. 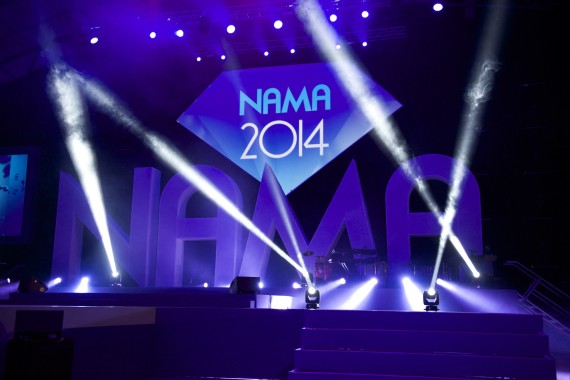 Many of the songs were sung in local dialect, which made the show feel authentic, and kept their heritage, culture and traditional elements strong. The costumes, language and fashion showed no compromise to western pressure and customs. 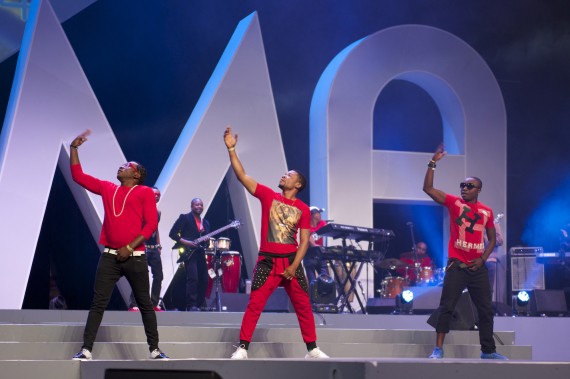 The set was simple yet dramatically stylish with grand staircases flanking the stage and huge laser light shows. Clearly an incredibly highly skilled production team were behind the staging. 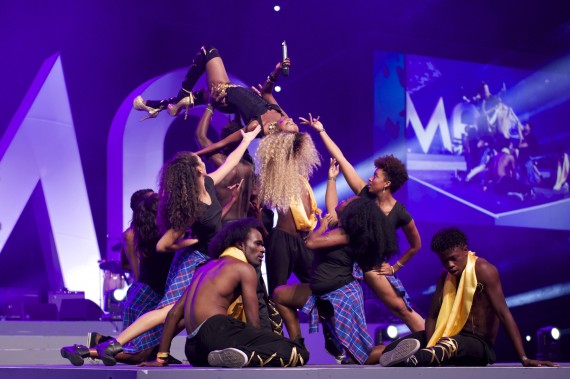 FREEDA DOES HER THING!

My favourite female performer of the night was Freeda- an African version of Beyonce meets Pink- who fearlessly threw in acrobatics and wild choreographed dance routines into her song. Her rehearsal showed and stage presence was impressive. 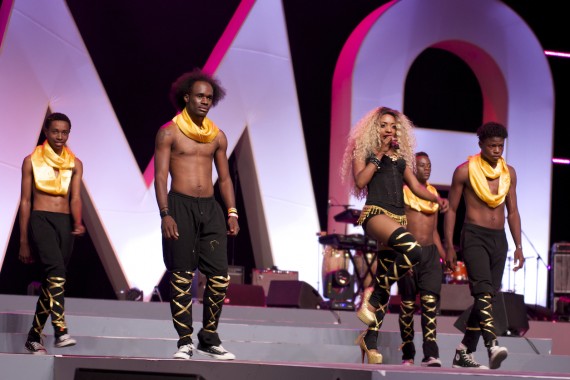 FREEDA WORKS IT AT THE NAMAS.

Exit- voted Most Popular Artist of the Year, is the man of the moment. His latest album, ‘My Notebook’ went viral with every jukebox, taxi, house party and club banging hits like ‘Koskola’ and ‘My Notebook’, with his album and performances garnering great reviews. “Getting the best Kwaito award was really just amazing,” Exit said. 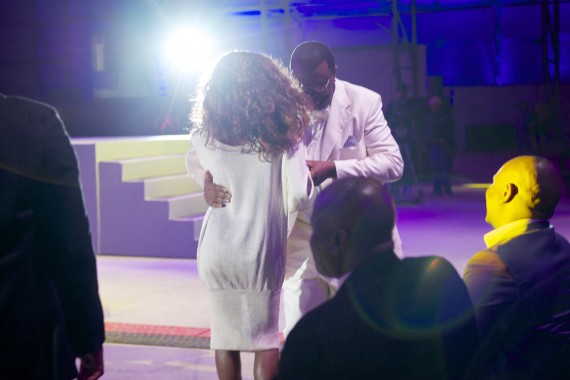 It was wonderful to see the right honourable Prime Minister Hage Geingob, who was presenting an award, engage positively when the music acts acknowledged him. One of the winners – Blossom- bowed to him before collecting her award and he rose from his huge, leather ,central seat in the front row to have a quick dance with her. He also acknowledged the music industrie’s value and contribution to the Namibian economy. This was a beautiful moment where the synergies of politics and creative arts remixed. In the NAMAs programme various politicians are vox popped to ask about their favourite music acts too showing a much closer synergy between the African worlds of politics and creative arts than the west. 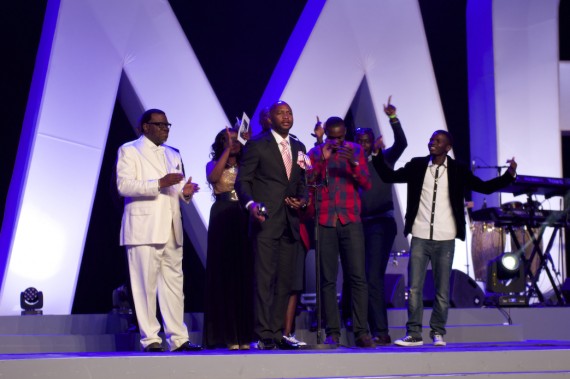 THE NAMIBIAN PRIME MINISTER (IN ALL WHITE) APPLAUDS WINNER THE DOGG ON HIS AWARD.

Interesting to see many of the winners speeches nodding to Namibia’s relatively recent independence from Germany in 1990. When music act Lize said ‘’there is truth in supporting your community’’ she was given a resounding round of applause. 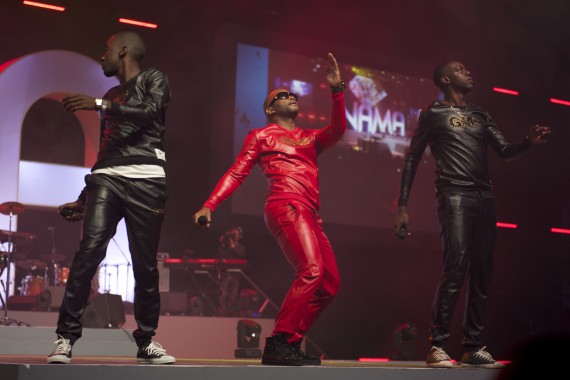 GAZZA’S PRESENCE AND CHOREOGRAPHY KILLED IT!

Even bigger was the moment when Gazza, who put on my favourite performance of the night with his high energy singing and dancing, mentioned in his wining acceptance speech that ‘’the road from 1990s independence has lead to my success now and I want you all to stand for OUR OWN elected prime minister and salute him!’’ to which the audience couldn’t scrabble up quickly enough to do and cheer. 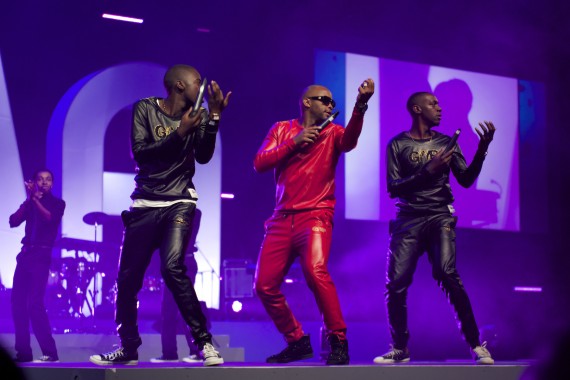 I’ve been working in music awards for the past two decades across the globe and the NAMAs stood up to all of these in terms of quality, excitement and standard.

Many of the NAMAs acts could be incredibly successful internationally, in the same way that many Nigerian acts have broken through to the UK and USA, and play listed on Radio 1. However it’s about creating that one big breakthrough hit and then following it up with a carefully diarised plan of releases and campaigns.

Winners from this years NAMAs will also go on to perform at Africa’s mega music festival in South Africa this September- Tribeone Dinokeng- Africa’s answer to Coachella, SXSW and Glastonbury!

For the TribeOne music festival, Gazza says his fans, the audience, music lovers and the entire Namibian nation can rest assured that he will deliver an entertaining and quality performance that will put the nation on the map. 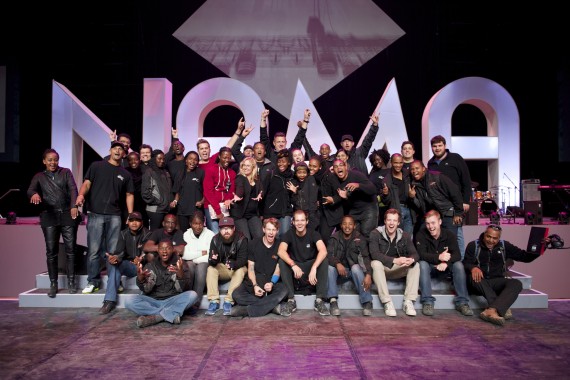 NAMAs was screened live on national broadcaster NBC and was impressively bang on time! The NAMAs organising committee and production company Rockstar4000 did a great job. I predict this side of the world attracting more and more international music industry brands and acts over the next decade, with the level of entertainment and tourism potential here.