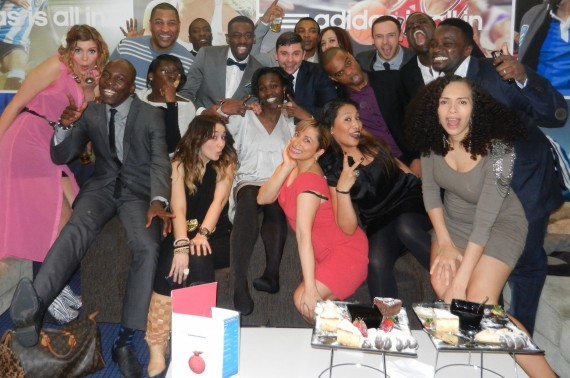 JASMINE IN THE ADIDAS VIP SUITE AT THE O2 WITH….(DEEP BREATH)…..GEORGIA (SBTV), COMEDIAN EDDIE KADI, MUSIC MANAGER RICHIE P, CLOTHES DESIGNER WALE ADEYEMI, MUSIC ACT BASHY, ACTOR JAY BROWN, ACTOR JASON LEWIS, ACTOR ASHLEY WALTERS, ACTOR JASON MAZA, ACTOR DANIEL KALUUYA, LONDON360 REPORTER ROSA DOHERTY, ADIDAS HEAD LADY PAOLA LUCKTUNG AND HER TEAM ADIDAS LADIES AKUA AND AISHA.
This week, aside from D’Angelo tickling our fancy with his shows whilst he was in town (did I ever tell you about when we were both in a bath together for an MTV interview? no-I’ll leave it there then), Sonys former big don Mervyn Lyn (VP strategic partnerships at Sony Music Entertainment UK-Vice President of Sony Entertainment, ) threw a party for his 50th birthday in east London. His former colleague Jennifer Mills and I both soberly cited ‘’we would never venture to E14 for anyone else’’ as the room full of Merv’s mates, family and huge number of SONY-BMG colleagues came out to celebrate his turning half a century old. From famous ex footballers, to record label execs and street teams, to his dearest and dearest a great night was had by all doing what the new generation refer to as the ‘’candy dance’’, the old generation refer to as the electric slide. The dj even laughed as he told us ‘’you kids think you made up that dance? You really don’t know’’ as the elders broke out into a few more old skool routines that had us standing back looking confused and shrugging our respective shoulders! Food nibbles were passed around on silver platters by Chef Collin Brown and we left at 3am dripping from a sweaty fun night-happy half-century Merv! 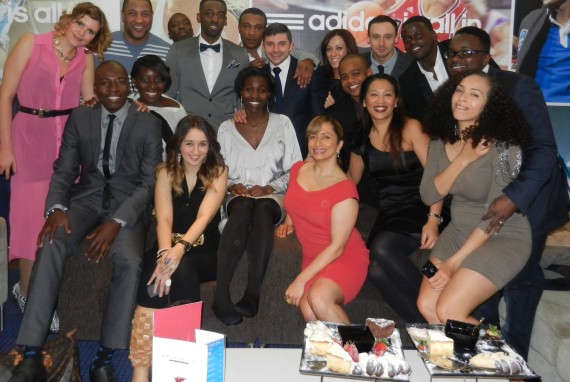 FULL CLIQUE!
The National TV Awards took place at the 02 Arena and it seemed that the Adidas VIP box was the only place to be as it was heaving full of movers and shakers from all industries having a sumptuous dinner and clinking drinks together. 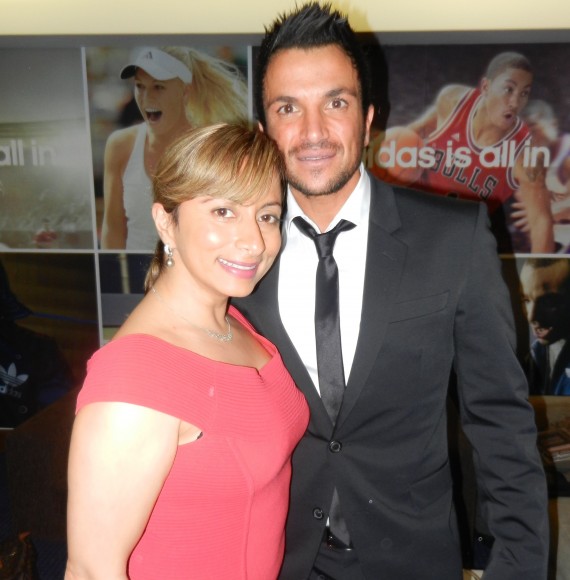 JASMINE WITH PETER ANDRE.
Ex atomic Kitten Kerry katona was in the box next door so we all had a bit of a giggle with her before her management colleague Peter Andre popped by to be a part of the most fun box in the Arena on the night. artist manager/producer Richie P brought Peter in to meet us all but a bizarre spell came over all the men and ladies around me as peter came to join us. the ladies made him pose for pictures where he was kissing their cheeks which he was more than happy to do-and the men cleared their masculine throats and said ‘’oh well I might as well grab a picture with peter too’’ LOL. everyone loves them some peter andre!
We were over 20 strong with a cast that saw (deep breath. here we go..)…..actors Ashley Walters, Jay Brown (in lots of new TV and films this year!), Jason Maza, Daniel Kaluuya , comedy writer and actor Jason Lewis, comedian Eddie Kadi, musician Bashy, clothes designer Wale Adeyemi, London360 reporter Rosa Doherty, SBTV’s leading lady –presenter Georgia, Adidas head honcho Paola lucktung, team adidas ladies Akua and Aisha!. 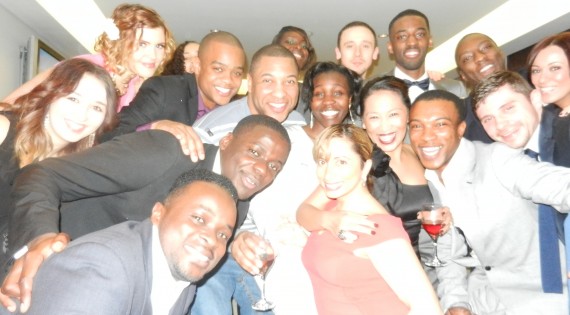 SILLY ANTICS WHILST WE WERE ”WATCHING” THE LIVE AWARDS!
Adidas are a brand that have supported the UK urban scene whether it be music acts, dj’s, comedians , style setters and more as well as athletes. Their commitment to not only helping dress up and coming acts, films, putting on music events, organising community uniting events all across the country, is impressive and commendable and shows their non commercial pro-social department are clearly connected and in touch with the youth as well as the David Beckhams of this world.
The hot food feast provided was scrumptious! Salmon, salads, chicken, vegetarian fare-all amazing for a live concert venue! The drinks game was off and popping but most of the box were well behaved and sipped soft drinks or 1 cheeky alcoholic beverage (I think when there are this many movers and shakers around each other no one wants to get too tipsy-although Ashley Walters was having such a good attempt that at the end of the night he was the party with his shirt open and fans mobbing him!. Ashley’s most recent BBC drama is currently onscreen on Thursdays (INSIDE MEN) -this guy just underplays his achievements but look his role cast credits up and its staggering how long he’s been doing his thing humbly grinding away-and he’s a family man-well impressive! He bounced over to impressionist Jason Lewis at one point in the night and laughed as he asked him when he could expect an asher d impression/skit. Eddie Kadi arrived late so we all had to pose again to take our group posed pictures on my camera timer-0but he and the other gents had all made such a wonderful effort at looking amazing in their black tie outfits-and they all smelt so fresh-it was all okay in the end-how could we be mad?. When we weren’t all having too much fun we did catch parts of the TV Awards and I noted that clearly CELEBRITY JUICE is an “urban ting” cos everyone around me in the Adidas box went wild as it won. 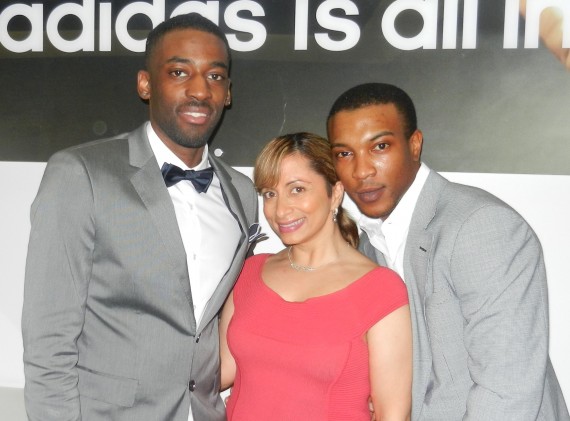 JASMINE WITH THE 2 ASHLEYS! (WALTERS/ BASHY)
I was just about to do some crazy poses that I saw Ashley doing with Jay Brown when West London gent scooted over to us and recommended we just stick to the ladylike pose-thanks bash! Speaking of ladylike-SBTV’s leading lady Georgia is a breath of fresh air in a field of wanna female media ladies. She’s professional, intelligent, sassy, got ambition and respectful of all those around her-sure to go far-watch out for her!.