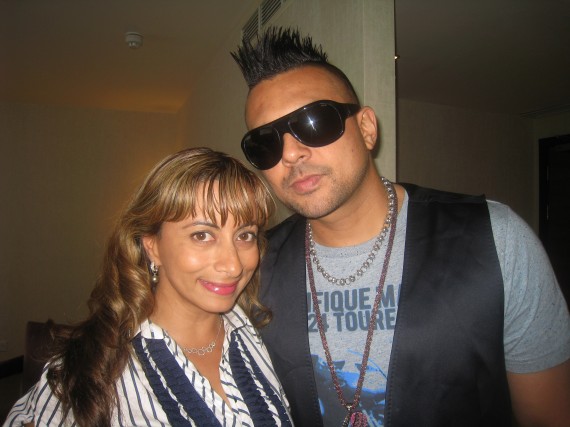 This week I’ve been working on new mainstream TV music shows and news shows for youth. My 2 favourite things. I also welcomed a whole new batch of new young journalists into the LONDON360 TV roles and next week spending most of the week interviewing loads of young people for the new LONDON360 reporter roles. I love my job when it combines all my passions.

I also grabbed a 5 day Craig David special with lunches with Sean Paul, Princess Nyah, DJ Manny Norte, the Grimedaily team, the British Urban Film Festival (BUFF) team, I did an interview with musician and actor Lonyo- (‘’Summer of love’’ singer and new movie lead in ‘’David is Dying’’).

And just to reassure all those on twitter who accuse me of not living in the real world or doing what real people do, I also had a doctor’s appointment, went bowling with friends, helped my mum and dad with shopping and cleaning and paid a parking ticket. There. Normal enough?

Sean Paul was in town for promo for his new music and his gig at the ONE LOVE PEACE FESTIVAL. We met at his hotel where his label rep the infamous Taponeswa Mavunga and his manager Steve Wilson were awaiting my arrival. We discussed world issues before Sean turned up. Everything from being gay, adopting children, Jamaican celebrities and Mohican hairstyles as Steve was rocking one. When Sean wandered in, it seemed he had also caught the Mohawk mania but he was quick to correct me. His he stated was a ‘’tappahawk’’. Sean told me he was currently enjoying the excitement about his single ‘’GOT 2 LUV U’’ produced by Norwegian duo Stargate (Rihanna, Ne-Yo, Chris Brown), and the infectious new track features Roc Nation starlet – Alexis Jordan, which is nearing 2.5million views on Youtube. He mentioned that they were probably going to shoot the video in September. As well as performing at the One Love Festival alongside Shaggy and Busta Rhymes he also played a sold out Bristol 02 Academy date and told me he was eager to finish up and get out his 5th new album early in the New Year.

I recalled the early days with Sean Paul when he was just starting out and we filmed his DIARY OF SEAN PAUL at MTV. We visited South Africa and places all across Europe where Sean sampled fine French wine, went into the African town ships and more. Sean’s an artist that has worked hard and his sound continues to get used in parties and clubs on the regular and has everyone dancing hard- even in my gym Body Jam classes! 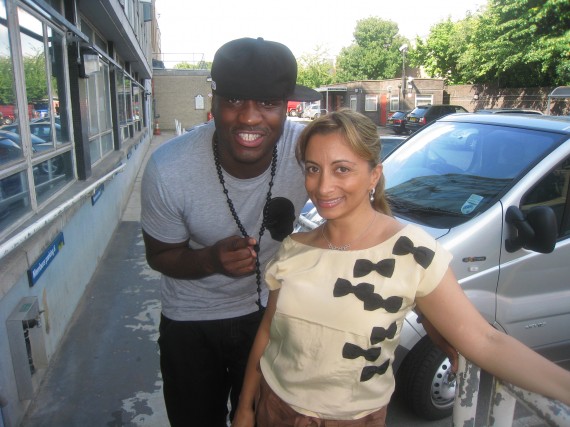 JASMINE AND LETHAL B

Next Lethal B kindly popped up to the BBC building to speak to a group of young journalists and reporters from LONDON 360 for an impromptu press conference scenario. 2011’s been a good year for Lethal B- who I know as his birth certificate name -Maxwell.  He’s done a remix with a few of the new school artists, set up his own label. And on the back of that, a lot of doors have reopened for him. He re released his next single called Mind Spinning, and now he’s working on an album probably to be released towards the end of this year or early January time and going on tour.

Maxwells from East London, Walthamstow. He understands more than most what its like for young frustrated people. He said ‘‘the council estates, a lot of negative things happen. That kind of inspired me to do better. I knew at some point this is only going to end in two ways, none of them are positive. So in that sense it was like the whole music thing was like bit cheesy but kind of like a saviour for me. When I was in a crew we used to support each other and go and make mix tapes and free styles and that was the kind of support we had for each other. Slowly we were building our career in disguise. We helped each other rather than being on the street and causing trouble’’.

Maxwell added ‘’ music definitely brings people together. Music’s the universal language. You see it doesn’t matter what colour you are, you know I do festivals, I do club shows, I do all sort of events and every single person knows that record. Now it is getting more accepted especially with festivals, a rock n roll kind of event and now it is starting to bring different genre in and people are just music lovers now.’’

Maxwell might be a pioneer in his game but he admitted he still feels frustration with parts of the media explaining ‘’Recently I was on the front page of the telegraph in Coventry, I was headlining a festival, and their headline was ‘’GUN RAPPER, HEADLINES FESTIVAL ‘’ and I was like what the hell are you talking about?!. And they were referencing my song ‘’Pow’’ saying it was more about guns and stuff like that. I was disappointed to see that. The negative, ignorant media stereotyping is still there. Slowly slowly, we’ll get there one day’’.

Maxwell explained to the young people in his presence that ‘’Grime life style is about expressing yourself. There is no kind of rules or anything; Grime has made me express myself. It’s made me dress how I want to. Don’t be scared to speak. If you don’t speak no one’s going to hear your opinion. Everyone has an opinion. So grime helps me express myself, how I want to express. If that makes sense.

The real thing about grime is when it started I was at the start of it; we didn’t even know what we were creating. We were just making music for the fun of it. And now it’s become this big huge whole thing. I think it’s the story of young kids from the streets of London who may not necessarily have the best background but who are becoming young entrepreneurs from nothing to something. I think that is what is making the story so powerful’’.

Maxwell laughed about how far Social Media can help a new act-something he didn’t always have the advantage of having at his fingertips ‘’now it’s a lot easier, it used to be very hard. When I first started doing the whole music thing, it was ten years ago, there were no things like Facebook, MySpace, YouTube. Now you can use resources and do things like free styles and collaborations which may not necessarily be on the album but it giving back to your fans’’

He did want to clarify that the new generation needs to pay attention to his era of acts claiming ‘I’m one of the pioneers and have set a blue print. When I came in, we didn’t really know what was going on, we just made music for the fun of making music and next minute we are on top of the pops and I think the new generation needs to really pay attention to see how its been done . And grime gets a lot of negative press. We are all positive guys from a negative environment.  We are just trying to better ourselves. It’s all about empowering yourself. About doing better. Being negative is only going to lead you in one way so I definitely feel like the new generation should pay attention and listen because we have done it’’.

We agreed that most celebs and brands were focusing on pro-social, positive community projects now with acts like Alicia Keys, Brad Pitt, Estelle and Samuel L Jackson supporting charities and orange networks sponsoring ‘’orange rock corps’’ and more. To this end Maxwell talked about his passion for organisation Biggafish. He sad ‘’Biggafish is amazing like organization. Its just kids on the street they get to meet their local stars. Its real positive, at that age 14 15 16, doing something productive, school holidays, times where a lot of kids have nothing to do and they get out to stuff, negativity comes off, Biggafish is important. it gets people involved’’.

Maxwell is putting his actions where his mouth is and talked about his passion for mentoring. ‘’I think that could really be positive. As I said you know especially at that age you are really not confused, but you don’t really know what you want to do where do you want to go, it’s all about trying to find inspiration and direction. If you are speaking to people who you look up to or you may respect give a bit of insight, where you wanna be, where you wanna go, so it could definitely help. Positivity is the way forward, most definitely’’.

If he hadn’t made it in music Maxwell confessed ‘’I think I’d probably be in education probably university, my parents are African Ghanaian so, they are really strict on this education thing. Maybe work in some sort of profession. My dad wanted me to be an engineer, electrical engineering and music thing picked up for me. I think I would probably be doing maybe engineering or a job like that’’.

With the Olympics coming to his area he thinks ‘’The Olympics was obviously a positive thing, the whole shopping centre thing is a catch 22, its gonna give young kids more jobs and help the economy. Bring more opportunities and yes it is getting a bit done up over there. When I was there it was just towers and blocks and garages, I hope it has a positive reaction’’.

Maxwell did admit though that he doesn’t live in his old hood any longer ‘’I don’t live in east London anymore, let me just put it out there, but my experience in east London is going to be there forever. As my journey goes along its always going to be reflected in my music, I don’t know if not still being there will really affect me that much’’.

Finally with African celebrities taking over our charts, sports and politics Maxwell said he’s a proud African now as ‘’it is hard being an African in the world, when I went to school ages ago,  it was like a crime to be an African, I used to get teased..uh uh uh you are from Africa! I’ve always been a proud African. And now Africans have just empowered themselves.. I have been in a Nigerian crew, but I am a Ghanaian, so I represent Ghana. But Africa as a whole, we have come a very long way. African parents born here managed to build a career. It’s a beautiful place man.. People are proud and we can find some African restaurants. You can find African clubs and African culture being embraced and all-it’s a happy day!.

With that I bid him farewell and stood taller and prouder with my own Kenyan roots!