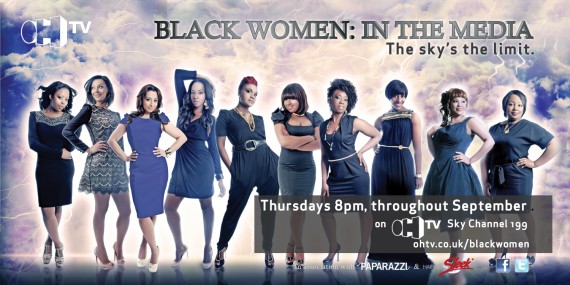 ‘Black Women: In The Media’

Discover their journey to success!

‘Black Women: In The Media’ in association with Paparazzi Studio and Hair by Sleek, is a three part documentary TV series that gives an exclusive insight into some of the UK’s most successful and talented women, paving the way in the Media Industry today.

From PR, to publishing, TV to radio, ‘Black Women: In The Media’ explores the careers of these ten phenomenal women. An inspirational and must-see show, it gives an exclusive up close and personal account of the highs and lows of their journey to success. Dynamic and honest, these women discuss what it took for them to push past the boundaries and excel as Black women in Britain today.

To complement the show, Pride Magazine is dedicating a double page spread in their September issue, alongside a billboard campaign across London starting from 1st September 2011. OH TV is also proud to announce Hair by Sleek and Paparazzi Studios as the programme sponsors of ‘Black Women: in The Media’.

Watch the journey on OH TV and hear first-hand, how these iconic women, went from being aspirational young girls into inspirational Black Women!

Discover more by logging onto http://www.ohtv.co.uk/BlackWomen