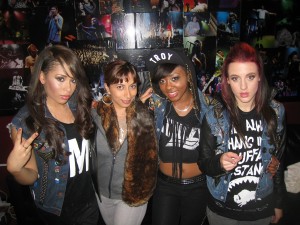 I’m surprised I’m actually able to put fingers to keyboard in order to pen this column as professional boxer and celeb trainer Lesley Sackey took my girl friends and I through a super fun, super efficient boxing session this past weekend that had ME feeling like the champ SHE is LOL.

The same night it was British comedian Slim’s sold out one man stand up show ‘’Slim in Wonderland’’ at the Hackney Empire which was, as expected packed to the rafters. Joining our man onstage were Kat, Eddie Nestor, Robbie Gee, Kevin J, Felicity Ethnic, Jocelyn Jee Esien, Axel the entertainer and more. Seen in the audience doubling up with laughter were Ashley Walters, Harvey, Rudolph Walker and more on that next time!.

As well as strictly fun there was business thrown in as I attended the first ever Ivy Club committee dinner with London’s uber impresario and business genius Richard Caring and other movers and taste makers.the Ivy Club looks like it will be THE place for the music and media new skool this coming year.

I was also lucky enough to be invited to British soul pioneer Omar’s one-man musical theatre show in Belsize Park which I attended with singer Terri Walker. Such a whirlwind of a February-more on all those to come!

But first it was off to Camden’s Koko where my old MTV family were holding their annual BRAND NEW music experience over 2 days. I attended on the first night where I was really keen to see the line up which was a new girl band that has everyone buzzing called Ruff Daimondz, female powerhouse Jessie J and star in the hood and charts -Tinchy Stryder.

I had been invited to watch Ruff Diamondz rehearse for the show and it was nothing short of a full on entertaining, impressive party.

The diverse trio is made up of 3 young girls with cheeky attitude. One black, one white, one brown-they embody the very diverse mix of your average group of friends on this country’s streets.

Firstly there’s short haired Troy who mostly takes leads vocals and is the uber professional, always upbeat ready to go one with a cute face that homes huge almond eyes with a velvet toned voice-the extrovert onstage. When the bands 5 dancers have numerous run through’s of their routines and the other band members are taking a break, she’ll sing live alongside them to keep them in rhythm.

Next is Caucasian ‘’Chronz’’ short for ‘‘Chronicles’’. She’s very Pixie like and embraces her grime peers with a staccato flow and London endz accent- a female that looks dainty and bambi like but has a strong, rough flow that can ride with the males in the scene.

The holy trinity is completed by honey coloured ‘’Tika’’ who encompasses the long haired exotic caramel home girl that rides the beat vocally and physically in a way that makes u want to get up and jam with her. A very cleverly put together act that will relate to many a youngster. They remind me visually of a modern day British TLC. They sound like nothing before with vocal harmonies that are precisely tutored by their manager Carla and a UK street sound that’s catchy with melodies that repeat constantly in your head.

Their circumference team is strong too. DJ Smasherelly is a seasoned pro who’s worked alongside the best of the rest- Estelle to name but one. Their choreographer is a well-known mover that’s been on the scene for a minute too. All their chips seem to be in the right place.

It’s been a long time since we had a female group in the urban pop scene. They’re nothing like the Eternals / Honeyz/ All Saints/ of yesteryear. Their appeal will be much younger than that of Mis-Teeq yet not as girly.

I smiled as I was watching them clearly embracing the UK lingo. I have always abhorred grammatical incorrect street slanguage but when Ruff Diamondz chanted “when we say all right you say STILL, alright STILL, alright STILL” I was caught up like a 15 year old singing along ‘’stilllll’’. The sign of a good act that draws you in whether you like it or not!.

They have balls too. As the dancers back flip around them manager Carla says “mind u don’t hit Troy”. Quick as a pistol Troy pipes up “or we’ll sue you” and whispers and laughs with me ‘’I’ve always wanted to say that”!.

The band ran through track after track including ‘’Life Changes’’( a Perfect anthem mix of rapping and harmonious singing), ‘’I just hate it babe’’ (very TLC meets Jade), a cover of Travis’ Billionaire tweaked with their own lyrics that go ‘’ I wanna be on the cover of Heat magazine stepping next to N Dubz and Mclean’’ and ‘’Allright still’’ with the energy going through the roof starting with that infamous Wu Tang introduction. And when their boss-president of Polydor Records-Ferdi walked in the performance level goes up several notches.

At the MTV show they kicked off proceedings very strongly and had the audience cheering and actively joining in each track with excitement-a great choice for the new talent line up.

The industry heads standing in the VIP with me from the worlds of fashion and music were most impressed with many muttering about them being the next big thing.

Next up was female of the moment Jessie J who deserves all the press columns she’s been getting. Her onstage performance was flawless. And it takes a lot for me to say that. Her sharp black bob framed her strong ready to get it eyes. She rocked a body leotard and tights with huge stars and leopard print vertiginous heels. She looks striking, her movement was mesmerizing and her vocals were on another level. She stalked around the stage raising the temperature and when ‘’do it like a dude’’ happened the place erupted!. Her fans were die-hard. That’s truly remarkable for a relatively new act at this early stage in her career.

After Jessie j it seemed as if half the audience left before Tinchy Stryders set. But Tinchy did his thing running through hit after hit in his now regular baggy jeans, hoodie and sunglasses uniform. He’s not the most energetic, talkative artist onstage but his numbers and chart positions don’t lie and he performed a very able set bringing out his ‘’Takeover’’ peers Giggs, Devlin and Professor Green-who the crowd when nuts for. Alas, the communication between audience and stage stagnated just before this encore as it seemed that Tinchys set was over and as most of the audience started to leave he returned with N-Dubz Dappy to duet on the hit ‘’number 1’’- an awkward moment that was just about salvaged. Probably through no fault of his own. In my experience things like this are blamed on poor backstage team management and communication.

All in all though a really strong night for British new music and refreshingly all with an urban pop edge unlike the BRAND NEW shows of old that were more indie pop based. Good job team MTV!.