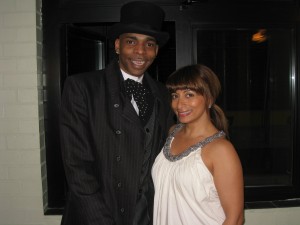 One of the UK’s finest comics-Slim with Jasmine.

This week has been a full on 360 social swirl of soirees which began last Saturday with my Jay Z night at my crib brought on as my godson who has been a Jay fan for years had never-(shock, horror)-seen Jay Z’s classic Madison square garden show-Fade to Black. It’s a great classic moment in hip hop with Jay on top form and so my peers and I dedicated a night to Jigga where we had to all wear something Hova related, only eat Jay inspired food and have a group viewing session of the classic show!

Valentines Day was of course full of love-no different than any other day in the Dotiwala calendar!.

Then it was full on panic for wardrobe, make up, hair and preparation for shoots at this years Brits whereafter we attended the Warner music party hosted by Max Lusardi and Adidas.

But even before all that it was full days of work followed by my resolution to play as hard in the evenings.

We began with legendary UK comedian Slim’s one man show at the Hackney Empire. This venue has housed many a comic and this weekend Slim was the main man onstage. The foyer was a buzz with celebs and film crews bigging up slim before the night even began. Steady on I thought, he hasn’t done his turn yet! I spotted in the audience Eastenders legend Rudolph Walker who’s always at these events always supporting the young talent, actor Adam Deacon, Wil Johnson, Jimmy Akingbola, Angelica Bell and her hubby Michael Underwood, singer Janet Kaye, Carroll Thompson, Victor Romero Evans, Josie D’Arby, Tameka Epsom, Judith Jacob, ChoiceFM’s breakfast hero Martin Jay , Curtis Walker, actor Chucky Venice, Kiss100FM dj’ss Manny Norte, Ricky and Melvin who were in the front row next to me

As soon as we were seated my guest passed me a bag of KFC smuggled in from next door. ‘’take the guy out of the hood…’’. As the warm up comics came on comic actress Jocylyn Gee turned up at my seat to squeeze past and get to hers late. We jostled and laughed before I looked at my mate’s face which was furious. It turned out in her bouncing frenzy Jocylen had managed to spill most of her glass of white wine on my mates new Ralph Lauren tracksuit. I made the right sympathetic noises and muttered something about dry cleaners and we sat back to enjoy the show.

Slim stands out amongst the very visible urban comics that dominate today’s scene not just with his very relaxed, natural story telling ability and mimicking skills, but also as his material sounds original, unique and is always new. He talked about family scenarios and his outlook on kids these days which the audience roaring in laughter. Slims final joke had every man in the audience and many of us women too- crossing our legs as he recalled in the funniest way ever how he broke his penis whilst having sex. When his UK tour comes around to your neck of the woods this is a night you wont want to miss. Post show a few of us got debating over a glass of vino as you do. The debate was raging before I had 3 sips of plonk. Whilst all agreed that Slim was great we were debating whether the London urban comedy scene was getting boring with its same old themed jokes about Africans, Indians, Chinese, west Indians, parents versus kids, and white families compared to black families. My friend was stating that a white comic couldn’t stand up onstage in front of a white crowd and tell black versus white culture jokes without getting into a lot of trouble and questioned why this was okay in our scene?. It had us all thinking. I wait and watch before casting my own opinion. Watch this space. 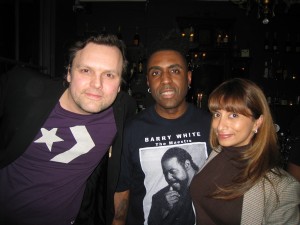 To end the week one grey February night I met singer Terri Walker and we drove up to Belsize Park in north London to The Stag pub where we wolfed down a sumptuous dinner with red wine before popping upstairs to the pub theatre space which saw a very diverse, cool , north London crowd all rammed in to see UK soul legend Omar Lyefook do his thing.

Omar was the star of a one man theatrical music show called ‘’Lovesong’’ , a 45 minute monologue about a musician that tours ropey old English clubs around the uk pondering about his past and present lost love and his adventures therein. His liaisons with groupies and dramas with promoters all interspersed with short snippets of many of his past and present hits that fitted into the narrative story beautifully.

Part of the English touring theatre, already performed at Edinburgh and other major British cities it’s a must see moment. Written by the very talented ward winner writer/director Che Walker-it was a very witty, emotional, beautifully scribed script that had us visualising the action easily. Parts were tragic, others hilarious but overall it was very entertaining and marked another side of the singer that we haven’t seen before. Perhaps we will see him on our screens soon!. Proof that theres life after the main gig finishes if you choose to be smart enough to find it!